NewsGuard, which bills itself at “the internet trust tool,” is among the latest technology tools claiming to rate information as reliable or fake news, supplying you with a color-coded rating system next to Google and Bing searches, as well as on articles displayed on social media.

If you rely on NewsGuard’s ratings, you may decide to entirely skip by those with a low “red” rating in favor of the “more trustworthy” green-rated articles — and therein lies the problem.

NewsGuard is in itself fraught with conflicts of interest, as it’s largely funded by Publicis, a global communications giant that’s partnered with Big Pharma, such that it may be viewed more as a censorship tool than an internet watchdog.

Now, NewsGuard has expanded its partnership with Microsoft, co-founded by Billy Boy, which will provide all users of Microsoft Edge browser free access to its questionable ratings, among other services.

Under Microsoft’s NewsGuard expansion, people who use Microsoft Edge’s desktop and mobile browser will have free access to NewsGuard’s ratings, which otherwise must be purchased via a $2.95 monthly subscription fee.

“Projects already underway include the company’s Defending Democracy Program and teams within Microsoft Research who are working on misinformation, disinformation and health care hoaxes,” according to a NewsGuard press release.2

Also under the agreement is Microsoft’s continued sponsorship of NewsGuard’s news literacy program, which is a “unique media literacy teaching tool that guides citizens through the overwhelming landscape of online news and information.”3

The news literacy program exists in the U.S., Great Britain, France, Germany and Italy, and with the expanded partnership it’s expected to roll out in Australia, Canada and other countries in 2020.4

With the news literacy program, librarians will even provide instructions to patrons on how to install the NewsGuard extension on their personal computers, tablets and cellphones.

Once you’ve installed the NewsGuard browser plugin on your computer or cellphone, the NewsGuard icon rating will appear on all Google and Bing searches and on articles featured in your social media news feeds.

The NewsGuard ratings are meant to influence readers, instructing them to disregard content with cautionary colors and cautions — but NewsGuard’s ratings are highly questionable, considering its primary backer, Publicis, is an advertising and data firm that’s been involved in advertising and marketing pharmaceutical products, cigarettes and unhealthy junk food to kids.

For instance, Leo Burnett, the ad company famous for creating the Marlboro man ad campaigns that made Marlboro the best-selling cigarette in the world and led to the nicotine addiction of millions, many of whom died from smoking, is a part of Publicis.5,6

NewsGuard co-CEO Gordon Crovitz stated in a press release, “We are delighted to be able to expand our relationship with Microsoft, which is a leader among companies in taking steps to address the unforeseen, unintended consequences of new technologies …

The internet has empowered people around the world with unprecedented access to information, but the internet has also made it easier than ever for misinformation to spread, including health care hoaxes about COVID-19.”7

Unfortunately, what’s less widely publicized is the widespread deception that can occur when a conflicted start-up company is allowed to dictate what’s truth and what’s not.

Publicis was the lead investor among a group of 18 that helped make NewsGuard a reality. As a giant global communications group, Publicis has divisions that brand imaging, design of digital business platforms, media relations and health care.

In early 2020, drug giant GlaxoSmithKline awarded Publicis Media a healthy piece of business, and the communications group responded by creating a custom platformGSK to run the drug giant’s media business; platformGSK in turn added Pfizer Consumer Healthcare to its portfolio, making the total venture worth $1.5 billion.

In April 2019, Publicis also announced that it would acquire marketing services company Epsilon in a $4.4 billion deal.10

Epsilon made headlines in 2011 after a massive data breach, but is far from a household name, despite its strong presence in the marketing world. What is Epsilon? CNET explained:11

“In addition to offering e-mail marketing services and managing customer e-mail databases for clients, Epsilon monitors social networking and other sites to see what people are saying about a company, advises on markets to target, helps develop and maintain customer loyalty programs, and offers Abacus, ‘the world’s largest cooperative database with over 8.6 billion consumer transactions and 4.8 billion business transactions’ used for creating lists of prospective customers.

Digiday further described Epsilon as “a smorgasbord of data given it has more than 250 million U.S. consumers in its database and sends over 71 billion personalized emails each year.”12

Epsilon was also an early adopter of Amazon Alexa, integrating public Alexa data with its own consumer information.13

Until the acquisition — the second largest deal in advertising history — Publicis lacked a major data marketing arm, but now, as Adweek put it, is “firmly in the data business.”14

In addition to owning NewsGuard, Publicis has made deals with other tech companies, including a $500 million, multiyear ad partnership with Facebook in 2014. “Under the terms, Publicis’ agencies and their clients — which include powerful brands like Procter & Gamble, Walmart, Bank of America, McDonald’s and Coca-Cola — will receive discounted rates on a range of Facebook products as well as access to Facebook’s user data and engineers,” according to Entrepreneur.15

In 2013, Publicis also inked a $100 million deal with Google and agreed to purchase millions of dollars in YouTube ads in the next year.16

If NewsGuard continues, it’s very likely Google, Facebook, Twitter and other platforms will use its ratings to lower the visibility of content — making nonconformist views disappear entirely.

Once installed on your browser, NewsGuard assigns a color coded “Nutrition Label” to sites, rating them green or red in a process they said would be “completely transparent and accountable.”17

The nine criteria NewsGuard is using to “protect” you from fake news include:18 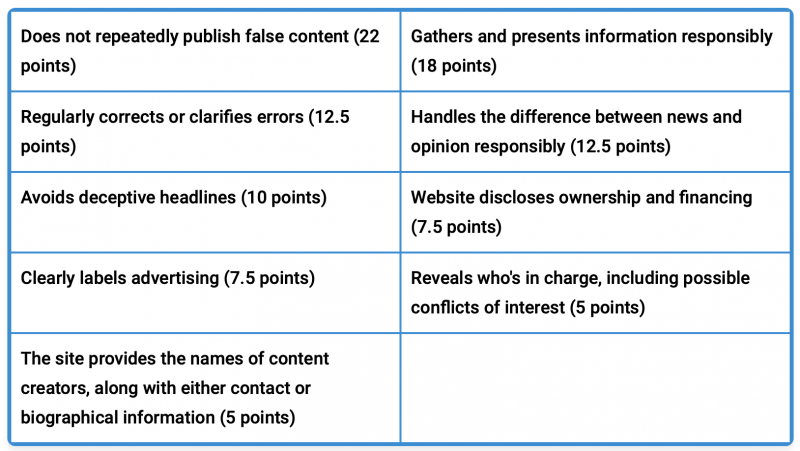 A score lower than 60 points gets a red rating, while higher scores get more favorable results, which is intended to provide readers with a “signal if a website is trying to get it right or instead has a hidden agenda or knowingly publishes falsehoods or propaganda.”19

However, NewsGuard’s ratings can’t be taken at face value.

Recently, NewsGuard announced that my site has been classified as fake news because we have reported the SARS-CoV-2 virus as potentially having been leaked from the biosafety level 4 (BSL4) laboratory in Wuhan City, China, the epicenter of the COVID-19 outbreak.

According to NewsGuard, “There is no evidence that the Wuhan Institute of Virology was the source of the outbreak, and genomic evidence has found that the virus is 96% identical at the whole-genome level to a bat coronavirus.”20

But NewsGuard’s position is in direct conflict with published scientific evidence suggesting this virus was created in a lab and not zoonotically transmitted.

Since my February 4, 2020, article, I’ve become increasingly convinced — through reviewing the scientific literature that NewsGuard ignores or is unaware of — that SARS-CoV-2 may in fact be a synthetic virus, likely created and released (inadvertently or not) from one or more laboratories that worked on weaponizing SARS and bat coronaviruses.

Interestingly, an April 2020 report by CNN reveals China’s censorship of articles mentioning the possibility that SARS-CoV-2 may have leaked from the Wuhan BSL4 facility appears to come from China,21 which means, by essentially also censoring such articles, NewsGuard is functionally protecting Chinese interests and inhibiting scientific inquiry.

Overall, it appears NewsGuard is just another big business aimed at keeping the chemical, drug and food industries, as well as mainstream media, intact by discrediting and eliminating unwanted competition, including yours truly and many others who empower you with information that helps you take control of your health.

Fighting Back Against Fake ‘Fact Checkers’

NewsGuard is backed by the Publicis Groupe, which has been manipulating what people think about commercial products for nearly a century.22

You don’t need this thought police, advertising front group helping you sort through fake news and telling you what’s sound science and what’s not.

There are a number of ways to fight back, including choosing browsers and search engines that do not automatically contain NewsGuard ratings.

In addition, if your local library is using NewsGuard, you can start a campaign to get it removed, while letting others know that NewsGuard is owned by a pharmaceutical public relations/data firm and is engaged in censoring truthful news and scientific freedom.

Religious Or Not, It Does Not Matter – This IS a Spiritual War Previous post
From 9/11 to COVID-19, It’s Been a Perpetual State of Emergency Next post