A new contact tracing program was recently unveiled in Massachusetts in partnership with Partners in Health, an NGO with links to US regime change operations, big pharma and the Clinton Foundation.

Last week, the State of Massachusetts began implementing a contact tracing program in partnership with a Boston-based organization with ties to the biggest names in big pharma: the George Soros’ Open Society and the Clinton Foundation.

Those ties go back decades and include U.S. intelligence assets and regime-change operations in Haiti including Operation Uphold Democracy, in which American troops invaded the Caribbean nation to clean up after the CIA-sponsored coup against Jean-Bertrand Aristide.

In April, Massachusetts Governor Charlie Baker announced the partnership, called the COVID-19 Community Tracing Collaborative, with Partners in Health (PIH), a non-profit organization with highly questionable patronage and an even more dubious history.

The program will be led by PIH’s chief medical officer, Dr. Joia Mukherjee, who described the goals of the contact tracing initiative as well as some of the authorities granted to PIH by the state of Massachusetts to NPR, such as making assessments about whether families have “the ability, the space, the food needed, the employment, the money to safely quarantine” and assigning social service assistants in case they fail to meet the necessary criteria.

The disturbing implications are clear. But, just in case it escaped any NPR listeners, Dr. Mukherjee made it abundantly clear when she tried to assuage the concerns of a Massachusetts contact tracer about parents who might be “infecting their children.”

Mukherjee assures listeners that PIH will be there to help families who “cannot separate themselves from their children easily.”

The Massachusetts state website has published a guide and overview of the program, containing cursory insight about the protocols contact tracers and contacted homes are to follow and it reads like something out of the 1985 dystopian sci-fi thriller “Brazil.” 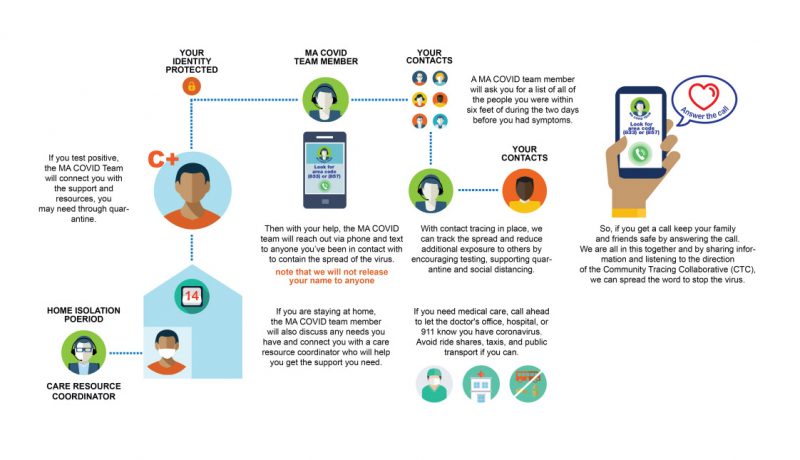 The process begins with a phone call in which you are asked for “a list of all of the people you were within six feet of during the two days before you had symptoms.”

It then states that contacted people are free to report anyone else they believe should have a visit from the PIH, asking for their phone numbers “so they can be called and cared for.”

But who is Partners in Health, besides a Boston-based 501(c)3 non-profit founded by a few “ordinary people with an extraordinary ambition”?

A look into its background uncovers a dark history intricately linked to the 1994 American invasion of Haiti called “Operation Uphold Democracy,” an operation Mintpress touched on in coverage of the attempted deportation of CIA-backed war criminal, Emmanuel “Toto” Constant.

In a book written by a former United States Army Military Intelligence lieutenant about the NGO’s origins, the author relates that then 23-year Paul Farmer – one of the five founders of Partners in Health – “clearly considered himself a champion of human rights.”

The telling passage describes how the young doctor-to-be challenges a U.S. Army captain about the release of a local sheriff named Nerva Juste.

Farmer wanted Juste in U.S. custody, arguing that “preventative detention” was necessary in a country that had “no functioning legal system.”

As Farmer was somehow advising U.S. military personnel on proper strategy, his future co-founder was also in Haiti and barley 18 years of age.

Ophelia Dahl, the daughter of renowned British novelist and intelligence officer serving as a liaison between Churchill and FDR, had arrived in Haiti as a “volunteer working with an ophthalmic organization with some handicapped children in Port au Prince.”

Dahl eventually met Farmer and later formed PIH with their other very “ordinary” founding partners: Jim Yong Kim, the twelfth president of the World Bank, Tom White, Boston’s “greatest philanthropist” and Todd McCormack, corporate VP of a “sports, fashion and events powerhouse” that would later be purchased by business magnate Ari Emanuel in 2014. 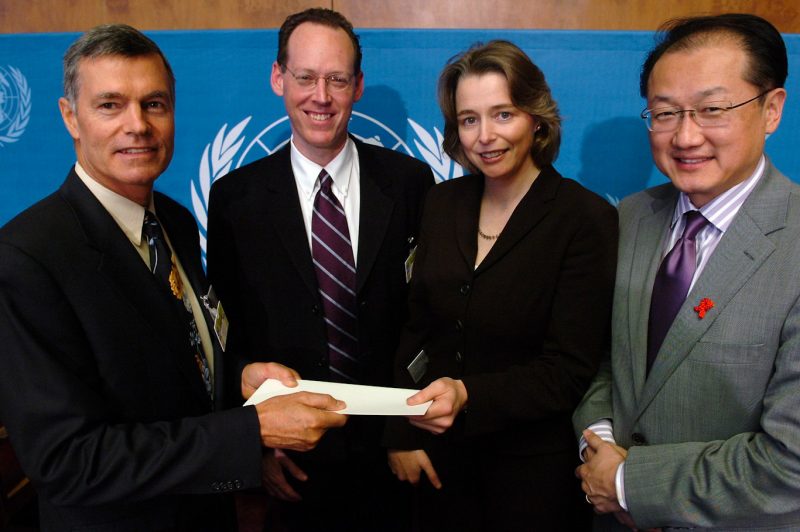 Emanuel’s two brothers, Rahm and Ezequiel “Zeke” Emanuel are, of course, intimately tied to the Clintons, with Rahm serving in the same White House as Hillary Clinton under Barack Obama and Zeke Emanuel, a medical anthropologist just like Paul Farmer, widely considered to be the “architect” of the Affordable Care Act (ACA).

The Clinton nexus appears to be strong at PIH as evidenced by one of their most well-known board members: Chelsea Clinton.

The “ophthalmic organization” Dahl cites was an American NGO run by the sixth bishop of Upper South Carolina of the (EDUSC), Rev. William A. Beckham, in partnership with local Haitian cleric, Father Fritz Lafontant.

Farmer and Dahl met at one of the NGO’s many healthcare-centered missions that had gotten underway just two years earlier.

The Episcopal church organized “medical trips” to the remote village of Cange in Haiti and began financing engineering projects in the community to provide clean water.

Later, a Clemson University program called CEDC (Clemson Engineers For Developing Countries) partnered with the EDUSC and continues to work in concert with them and Partners in Health after its founding in 1987.

Big pharma on board

The relationship between Farmer and the Clinton Foundation spans decades.

PIH has “worked with the Clinton Giustra Enterprise Partnership (CGEP) to stimulate entrepreneurship for smallholder farmers in Haiti,” in addition to similar projects “throughout Africa, from Liberia to Rwanda.”

The organization has even built clinics on the Island in partnership with the Clinton Global Initiative.

With such an intimate connection revolving around the Clinton Foundation’s healthcare projects, it should come as no surprise that PIH’s biggest donors and partners feature some of the largest pharmaceutical corporations currently set to profit from the COVID-19 pandemic, including Eli Lilly and Co., Johnson & Johnson and Pfizer among many more. 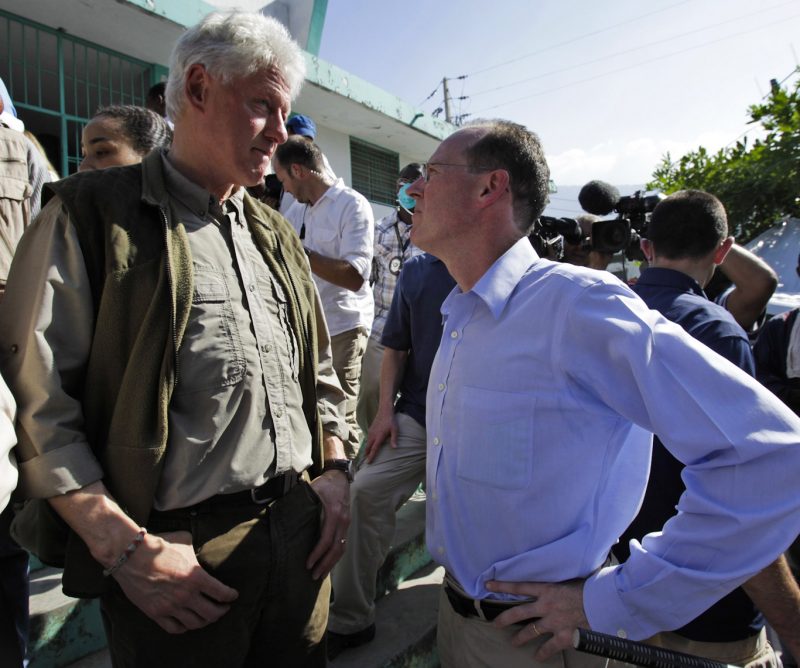 Also found on the list of foundation partners, both public and private, are the Bill & Melinda Gates Foundation, the Inter-American Development Bank, USAID, WHO, GE, IBM and a host of others.

The George Soros’s Open Society Institute donated $3 million to PIH for a “community-based program” in Africa back in 2007 and in 2014, Soros donated another $4 million to PIH to build an Ebola-treatment center in Liberia, Africa.

The Liberian project was anchored by a “coalition” put together by PIH-founder, Jim Yong Kim, which included Director-General of the WHO, Margaret Chan, CDC Director Tom Frieden and Francis Collins, Director of the National Institute for Health, who claimed to have been motivated to start the project by a collective dismay over “the global response”.

The contact tracing program being rolled out in Massachusetts by PIH is, logically, informed by the many years the organization has been practicing their healthcare engagement methods throughout the world, and in particular Haiti and developing African nations.

Following a pattern used when the first policing innovations were tested out by U.S. military forces in the Philippines at the turn of the twentieth century, social control mechanisms are now being imported stateside after being thoroughly tested elsewhere.

PIH, and founder Paul Farmer in particular, understand exactly how to bring about “sustainable health systems” as he claims PIH has done in places like Guinea, Liberia, and Sierra Leone.

Oddly, in a post published on the Open Society website, Farmer appears to be opposed to quarantine, conceding that doing so “slows the flow of food and labor” and can “touch off longer, more complex health crises.”

While he is referring here to African farmers, the same principle surely holds for even the most advanced economies like the United States.

Paul Farmer is a complex fellow. Kidder, in his PIH biopic, “Mountains Beyond Mountains,” claims the Farmer not only chided a U.S. military captain about his operational choices, but also pointed out that he found it unacceptable that “a high official of the junta” had received training at the infamous School of the Americas. The author never makes clear what context Farmer was speaking in.

The Worst Is Yet to Come: Contact Tracing, Immunity Cards and Mass Testing Previous post
Millions Predicted to Develop Tuberculosis as Result of Covid-19 Lockdown Next post