Minneapolis, MN — Dozens of businesses and other buildings in Minneapolis, near the police department’s third precinct, were hit hard with vandalism this week, with some of them being completely burned to the ground.

There was undoubtedly some organic intent behind this destruction.

However, several videos of a highly suspicious man wearing a gas mask and carrying a hammer, paint an ominous picture of potential agent provocateurs stoking the rioting among the protesters.

Throughout the day, most of the protests in Minneapolis were peaceful with the exception of protesters directing their anger and property destruction toward the police department who refused to immediately charge George Floyd’s killers.

However, as was widely reported, the Autozone near the department was one of the first places to be looted and set on fire.

Now, we have the video of the first person to instigate the destruction — and he was definitely not part of the George Floyd protests.

Brad Svenson (@SvensonBrad on pscp.tv) was streaming live Wednesday night. As he filmed the protests, he took no interest in the Autozone directly behind him as all the protesters were peacefully chanting at the officers in front of them.

All of that quickly changed, however, when we hear a loud pop, followed by the sound of breaking glass.

When Svenson panned his camera around, we see a shady white guy, dressed in all black, holding an umbrella, a hammer, and a gas mask, shattering the windows out of the Autozone like he was getting paid to do it.

For those unaware, the black umbrella is a symbol of the protests in Hong Kong.

Protesters used umbrellas as a tool for passive resistance to the police’s use of pepper spray to disperse the crowd during the occupation of the city over the 2014 elections.

What this man was doing was hardly passive. It also looked like he Googled “rioter” and dressed up like the first picture he found.

Illustrating just how reluctant the protesters were to begin rioting and looting, they yelled at the shady man in black and confronted him as he began smashing windows.

“Are you a cop?!” several of the protesters yell.

As the man attempts to escape without being tackled or stopped by folks who did not want the rioting and looting to start, the man becomes confrontational and challenges one of the men pursuing him to a fight.

Then, in typical police officer fashion, the provocateur tries to swat the camera from the person filming him.

“Get the f**k away from me,” the agent provocateur says as he flees behind the Autozone. He is chased about 100 feet away before the video cuts out.

It is pretty clear from the video that the protesters — at least before the provocateur smashed out windows — wanted nothing to do with looting and destroying local businesses.

However, after he smashed the windows of Autozone, it would set off a chain reaction, leading to a handful of others parting from the peaceful protests and begin looting.

Many folks have taken to social media to allege that he is a cop, with some claiming he fled into the police station.

HOLY SHIT. The cop who started the vandalizing was outted by people who know him. His name is Jacob Pederson of the St. Paul PD. pic.twitter.com/vgw8EqKz5j

Update: It has been revealed that Officer Jacob Pederson of the St.Paul Police Department was the culprit responsible for kick starting the riot in South Minneapolis. He was captured on camera and identified by his Ex-wife.

Also, someone noted that his ex-girlfriend may have outed him.

Despite the internet claiming the man in the mask is Pederson, Heavy.com spoke to the St. Paul PD who claimed it was not him.

In a statement sent to Heavy, Steve Linders, public information officer for the Saint Paul Police Department, wrote that the post accusing Pederson was a “false social media post.”

The man isn’t Pederson, he stated (although he didn’t use Pederson’s name, Heavy asked about that.)

We are aware of the social media post that erroneously identifies one of our officers as the person caught on video breaking windows in Minneapolis.

We want to be perfectly clear about this: The person in the video is not our officer.

Our officer has been working hard, serving his community, keeping people and property safe, and protecting the right to peacefully assemble.

It’s unfortunate that people would post and share this untrue information, adding more confusion to an already painful time in our community.

While we have no way of knowing who this man was or if he is a cop, it is apparent that many folks think he was a cop.

Also, many folks allege that he is Antifa or a white nationalist attempting to provoke a civil war.

Indeed, TFTP has been given screen shots of a conversation that discussed how similar tactics would be employed to sow divide.

Whomever this person was, the results of his actions by smashing the windows at Autozone were that of an agent provocateur.

Divide And Conquer: The Agent Provocateur

TFTP uploaded the video above to YouTube who promptly pulled it down, claiming it went against Community Guidelines.

It showed a man smashing a window and nothing else. Never did we claim the man was a cop or anything else. This is the situation independent journalists deal with. 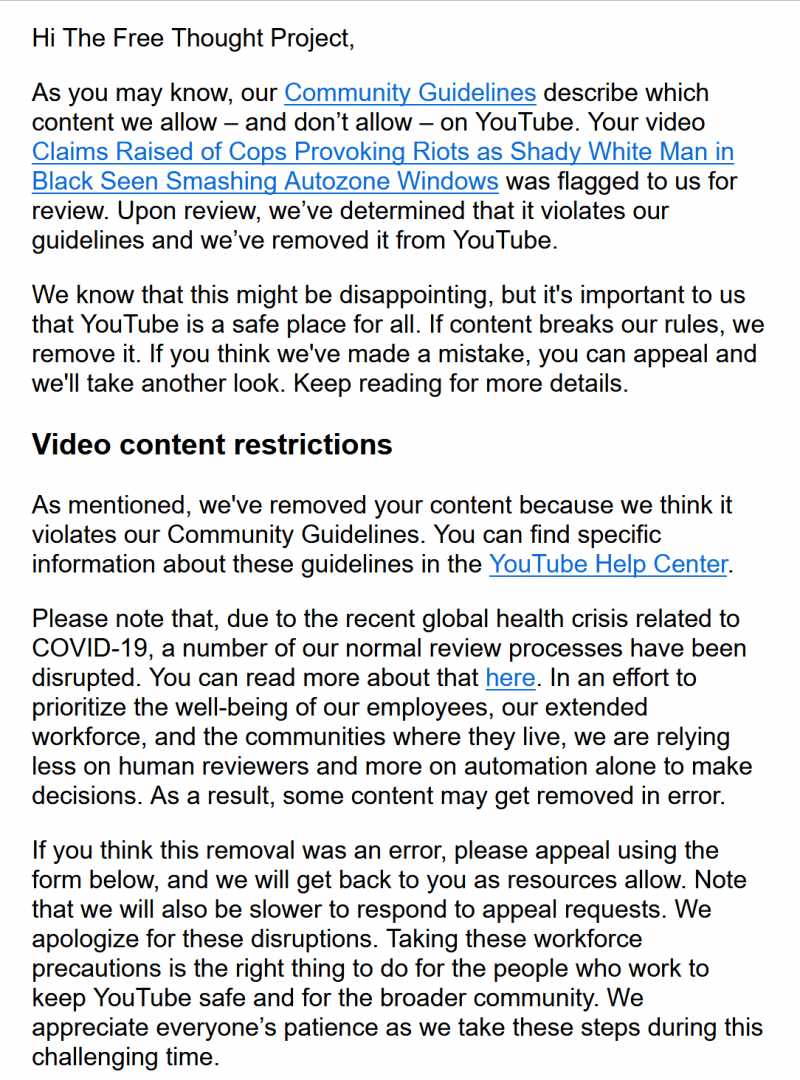 We have appealed their claim.

TFTP has reported on multiple instances of police officer provocateurs being caught in the act. We even reported on one in which a cop disguised as a protester, was beaten and kidnapped by fellow cops who did not know he was undercover.

As TFTP’s John Vibes previously pointed out, in most cases — like the protests on Tuesday — political protesters are nonviolent and do everything they possibly can to avoid clashes with the police.

Demonstrators are well aware that they are outmatched and are only assembling in groups and taking to the streets as a way of promoting their political ideas – this is the essence of free speech.

This is an extremely powerful political freedom, which is why it is met with such hostility from the establishment.

Almost every single time there is a public protest, the authorities are unsympathetic and use heavy force to discourage protests from taking place in the future.

However, they don’t attack the mob with guns blazing because they know it will further expose their oppressive nature and add credibility to the revolutionary movement.

So agent provocateurs — whether cops or those hell bent on causing conflict — instigate physical altercations between activists and authorities.

While undercover, these agents commit acts of violence and vandalism to give the police a pretense to use force against the demonstrators.

Once the agent smashes one window — like was done at Autozone — or throws one rock on behalf of the group they have infiltrated, the authorities are able to send in the cavalry and turn the demonstration into a war zone.

Proving this point is the fact that the National Guard was requested last night in Minneapolis.

After the provocation is complete, any legitimate peaceful protest intentions are smeared into oblivion as the rest of the world looks at the protesters like they’re violent criminals. See how that works?