[Back in October 2019], Zuckerberg gave a talk regarding free speech. He has referred to Facebook as a technology company. He explicitly stated that “We are a tech company, not a media company.”

But then subsequently, in Congressional testimony, he gave a more nuanced answer:

“I view us as a tech company because the primary that we do is build technology and products. I agree that we’re responsible for the content, but we don’t produce the content.

“I think when people ask us if we’re a media company or a publisher, my understanding of what they’re really getting at is do we feel responsibility for content on our platform.

“The answer to that, I think, is clearly yes. But I don’t think that’s incompatible with fundamentally at our core being a technology company.” 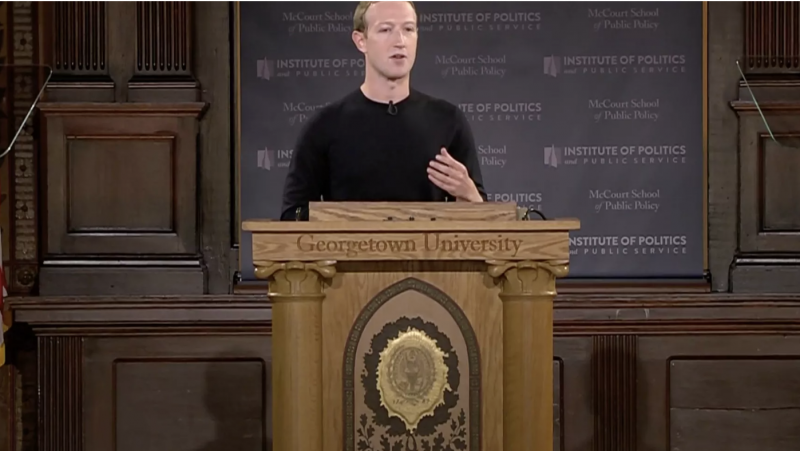 Later, in filing a motion to dismiss the lawsuit from Laura Loomer, Facebook’s attorneys stated that “Under well-established law, neither Facebook nor any other publisher can be liable for failing to publish someone else’s message” and that referring to Loomer and others as “dangerous individuals” and “promoting hate” as constitutionally protected opinions of a publisher.

Zuckerberg in his recent speech at Georgetown stated:

“People having the power to express themselves at scale is a new kind of force in the world — a Fifth Estate alongside the other power structures of society.

“People no longer have to rely on traditional gatekeepers in politics or media to make their voices heard, and that has important consequences.

“We don’t fact-check political ads. We don’t do this to help politicians, but because we think people should be able to see for themselves what politicians are saying.

“And if content is newsworthy, we also won’t take it down even if it would otherwise conflict with many of our standards.”

“I know many people disagree, but, in general, I don’t think it’s right for a private company to censor politicians or the news in a democracy.”

“Increasingly, we’re seeing people try to define more speech as dangerous because it may lead to political outcomes they see as unacceptable.

“Some hold the view that since the stakes are so high, they can no longer trust their fellow citizens with the power to communicate and decide what to believe for themselves.

“I personally believe this is more dangerous for democracy over the long term than almost any speech. Democracy depends on the idea that we hold each others’ right to express ourselves and be heard above our own desire to always get the outcomes we want.”

I take the liberty to quote Zuckerberg at length as I believe them to be of merit.

But that raises the question: is Facebook a technology company that promotes free speech and exists as a public forum exempt from liability?

Or is it a publisher with the right of censorship, the right to edit content as it deems at its discretion, whatever the methodology; but must then assume responsibility and liability?

To say you assume responsibility by declaring yourself exempt from liability is an absurd contradiction. It is the assumption of liability that binds the statement of responsibility.

As troubled as I am regarding the hypocrisy and contradictions of Zuckerberg’s words and Facebook policy and practices, it is more troubling that the technology community and many progressives have criticized his speech as they take a much narrower view of what speech should be protected and what speech should be permitted.

Essentially many believe technology should be used as a censor according to the criteria of who controls the technology company in partnership with a mob that wants to repress dissent. Those that want to control our words. Control our thoughts. Control our actions.

According to their perspective of what is right, just and moral. That they anoint themselves as the modern version of Torquemada. And make no mistake, it is an Inquisition. A strategy to dehumanize, delegitimize, and digitally exterminate those who disagree.

During the 1800 election where Jefferson challenged Adams, to a great extent because of the Alien and Sedition Acts, a newspaper supporting the Federalist Party (Adams) wrote that if Jefferson was elected:

“Murder, robbery, rape, adultery, and incest will be openly taught and practiced, the air will be rent with the cries of the distressed, the soil will be soaked with blood, and the nation black with crimes.”

Actually, most newspapers then were affiliated and backed by political parties and served as propaganda machines.

And the public was considered mature enough to process and filter the noise on their own. If there is doubt as to the intent of our founders, permit me to cite:

“If all printers were determined not to print anything till they were sure it would offend nobody, there would be very little printed.” — Benjamin Franklin

“If men are to be precluded from offering their sentiments on a matter, which may involve the most serious and alarming consequences that can invite the consideration of mankind, reason is of no use to us; the freedom of speech may be taken away, and dumb and silent we may be led, like sheep, to the slaughter.” — George Washington

“In those wretched countries where a man cannot call his tongue his own, he can scarce call anything his own. Whoever would overthrow the liberty of a nation must begin by subduing the freeness of speech; a thing terrible to publick traitors.” – Benjamin Franklin

“The press, confined to truth, needs no other legal restraint; the public judgment will correct false reasonings and opinions, on a full hearing of all parties; and no other definite line can be drawn between the inestimable liberty of the press and its demoralizing licentiousness.” – Thomas Jefferson

“To preserve the freedom of the human mind … and the freedom of the press, every spirit should be ready to devote itself to martyrdom; for as long as we may think as we will, and speak as we think the condition of man will proceed in improvement.” – Thomas Jefferson

And it is not only the founders who have expressed the sanctity of free speech without censorship, independent of its content.

“We are reluctant to admit that we owe our liberties to men of a type that today we hate and fear — unruly men, disturbers of the peace … in a word, free men. … Freedom is always purchased at a great price, and even those who are willing to pay it have to admit that the price is great.” — Gerald W. Johnson

“You tell me that law is above freedom of utterance. And I reply that you can have no wise laws nor free entertainment of wise laws unless there is free expression of the wisdom of the people — and, alas, their folly with it. But if there is freedom, folly will die of its own poison, and the wisdom will survive.” — William Allen White

Tyranny is defined as the arbitrary use of power or control. The oppressive power over the mind of man.

If so-called social media places limits on speech, censorship, then the right honest and accurate label should either be platforms that practice tyranny or publishers liable for the content that it’s editors decide to remain posted.

Technology, decentralized, without any controlling authority like bitcoin, liberates us. No censorship. Freely transferable. Independent of any third party. Absence of force.

Unfortunately almost all technology developed today has a controlling authority acting as a censor.

Which is fine if they acknowledge themselves as publishers and should be responsible, as all publishers are, by being liable for the content it chooses to publish.

Whether it is their words or the words others have agreed to submit and they have agreed to remain posted for all to see. This is the danger of centralization of power and authority.

Eliminates checks and balances. The end of due process. A challenge to the preservation of all our civil liberties enshrined in our Bill of Rights.

Where there is not contestability, there is little to no competition. A condition for a free society is political competition and economic competition. Free of persecution.

The reliance on markets and contract law entered into voluntarily. And the existence and recognition of inalienable rights.

If not, we breach our social contract. We punish dissent. We choose might makes right. We choose to impose on others, through tyranny of the majority or even tyranny without a majority

The choice is as stark as deciding what we stand for between the following:

Where permission is required and the party that grants consent is not contestable, tyranny exists.

Rabbi Hillel said “that which is despicable to you, do not do to your fellow.”

And if it would be despicable to you if someone prevented you from doing so, persecuting you, dehumanizing you, deplatforming you, digitally exterminating you. Then it is despicable for you to do it to your fellow.