Why Sweden Has Already Won the Debate on COVID ‘Lockdown’ Policy

As Europe and North America continue suffering their steady economic and social decline as a direct result of imposing ‘lockdown’ on their populations, other countries have taken a different approach to dealing with the coronavirus threat.

You wouldn’t know it by listening to western politicians or mainstream media stenographers, there are also nonlockdown countries.

They are led by Sweden, Iceland, Belarus, Japan, South Korea and Taiwan.

Surprisingly to some, their results have been as good or better than the lockdown countries, but without having to endure the socio-economic chaos we are now witnessing across the world.

For this reason alone, Sweden and others like them, have already won the policy debate, as well as the scientific one too.

Unlike much of the rest of the world who saw fit to unquestioningly follow China’s lead on everything from quarantining, to economic shutdowns, to contact tracing, and PCR mass testing, nonlockdown countries have instead opted for a somewhat lighter touch – preserving their economies and societies, and in doing so avoiding an endless daisy chain of new problems and obstacles deriving directly from the imposition of brutal lockdown policy.

On the European front, the Scandinavian country of Sweden is now garnering more attention than before, and has become an object of both criticism and fascination for those against or in favor of lockdown policy.

While countries like the United States and Great Britain continue to top the global tables in terms of COVID-19 death tolls, Sweden has only suffered marginal casualties in comparison, while avoiding the intense strain on society and loss in public confidence which lockdown governments are now grappling with as they continue to push their populations to the limits of social stress and economic tolerance.

You could say those governments are already careening over the edge by looking at the latest jobless figures coming out the US with 30 million new people filing for unemployment in the last few weeks.

Unlike many others, Sweden has not enforced any strict mass quarantine measures to contain COVID-19, nor has it closed any of its borders.

Rather, Swedish health authorities have issued a series of guidelines for social distancing and other common sense measures covering areas like hygiene, travel, public gatherings, and protecting the elderly and immune compromised.

They have kept all preschools, primary and secondary schools open, while closing college and universities who are now doing their work and lectures online.

Likewise, many bars and restaurants have remained open, and shoppers do not have to perform the bizarre ritual of queuing around the block standing 2 meters apart in order to buy groceries.

According to the country’s top scientists, they are now well underway to achieving natural herd immunity. It seems this particular Nordic model has already won the debate.

Because Sweden decided to follow real epidemiological science and pursue a common sense strategy of herd immunity, it doesn’t need to “flatten of the curve” because its strategic approach has the added benefit of achieving a much more gradual and wider spread.

“We are all trying to keep the spread of this disease as low as possible, mainly to prevent our healthcare system from being overstretched, but we have not gone for the complete lockdown.

“We have managed to keep the number of cases low enough so the intensive care units have kept working and there has always been 20 per cent beds empty and enough protective equipment, even in Stockholm, where there has been a huge stress on healthcare. So in that way the strategy has worked.”

Similarly, it doesn’t have the deal with the newest ‘crisis’ obstacle which lockdown states seem to be using as an excuse not to reopen society and the economy, which the fear of a ‘second peak‘ which governments are telling the public will wreak havoc on the nation by “infecting the vulnerable” and will “overwhelm the health services” if everything is suddenly reopened and social isolation and distancing is relaxed.

This catch 22 which countries like the US and UK are caught in is predicated on the belief that the coronavirus might suddenly unleash itself again on the populace.

Certainly, there could be a second surge, but it should be noted that this is also a direct result of the decision to impose lockdown in the first place.

According to top epidemiologist Dr Knut Wikkowski, the decision to lockdown only delayed the inevitable for countries like the US and UK, and quite possibly made the COVID-19 problem even worse than it would have previously been in the short to midterm, but in the long-term the results would be relatively the same proportionally in term of human casualties.

The penny should have really dropped after it was revealed two weeks ago by Oxford Professor Carl Heneghan, Director for Centre for Evidence-Based Medicine, that the peak of the UK’s coronavirus ‘crisis’ actually came a full week before Boris Johnson initiated lockdown on March 23rd.

In fact, if you plug in Sweden’s actual data into Neil Ferguson’s own infamous computer model which sent the UK government into mass-panic mode, here’s what you would get: 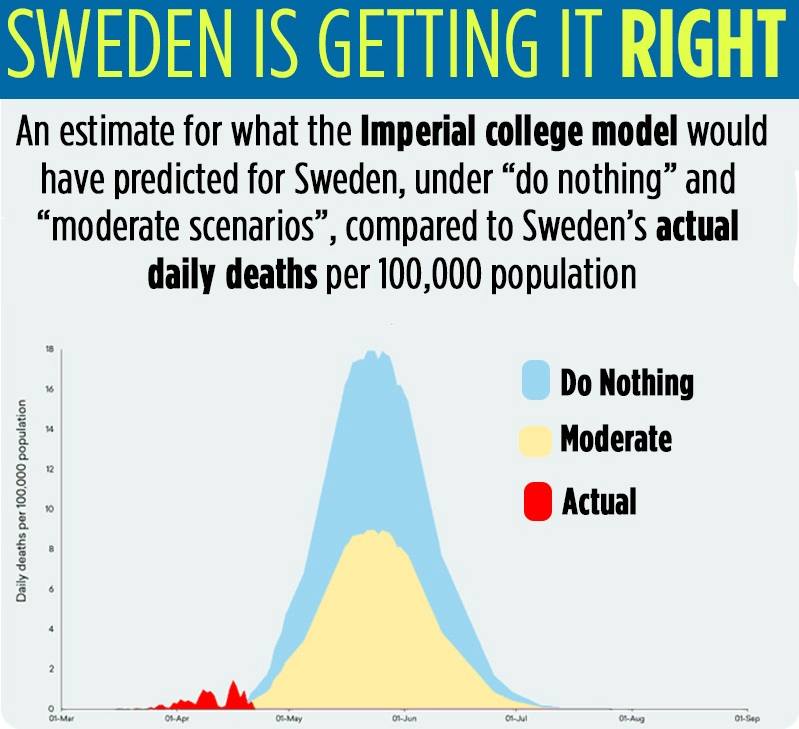 The numbers don’t lie, but statistics can be made to tell any story the narrator wants, especially when the storyteller is government.

Just look at the last 50 years of announcements regarding unemployment and inflation levels.

One thing we should have learned by now is that government will never let things like facts and real science get in the way of a slow motion train wreck in progress, hence you can see some UK officials still clinging to Ferguson’s initial prediction as some sort of ‘proof’ that the lockdown was necessary to avoid ‘mass death.’

Outside of popular supposition and media talking points, there is no scientific study which shows that lockdown saved any significant number of lives.

Instead, new data strongly suggests quite the opposite.

Were Nikola Tesla’s Ideas About Free Energy and Communication with Aliens Exploited by his Enemies? Previous post
The Washington Times: Coronavirus Hype Biggest Political Hoax in History Next post