Unprecedented Level of Censorship – Is This the End of Free Speech?

(Updated below with proof of shadow banning and censorship) – In the past three months, I’ve been an experiencing an unprecedented level of censorship from Facebook, Google, and Twitter. Because I kept getting restricted (i.e. banned) by Facebook for sharing on their platform and having a low reach for my entire website as a result, I decided to stop sharing for a period of time and see if they will lift my ban. To date, this didn’t happen, despite contacting them a few times.

(Last time that I got banned was for sharing this article – an article that was clearly not violating any of their community standards, – and I received an apology from Facebook after contesting their decision, but the shadow-ban was never lifted and the reach for HumansAreFree.com never returned, despite going as far as removing the article from their platform).

From the highest day in October, to the worst day in February, we can see that the number of people who visited my website dropped 23.6 TIMES. Overall, there’s probably around 8-10 times fewer people accessing HumansAreFree.com in the past 3 months, compared to the good months of last year.

After not posting anything on Facebook for 2 months, my ban has been lifted today briefly (less than 30 minutes)  and I could once again see my traffic pick up.

I was expecting my ban to be lifted around this date (because it was briefly lifted a month ago, and two months ago around the same date), so I was ready to record the traffic spike, followed by censorship.

As soon as the ban was lifted, the traffic started to spike up, and over the course of less than 30 minutes, there were 1087 visitors online at the same time. Then, suddenly, there was almost nobody online anymore:

The next three screenshots are showing how many people were online after I got banned once again – almost nobody:

Now, at the peak of my traffic (in the morning) this is how many people are online:

Followers on Minds.com have notified me in the past couple of months that my articles are not being shown to any of their friends on Facebook: 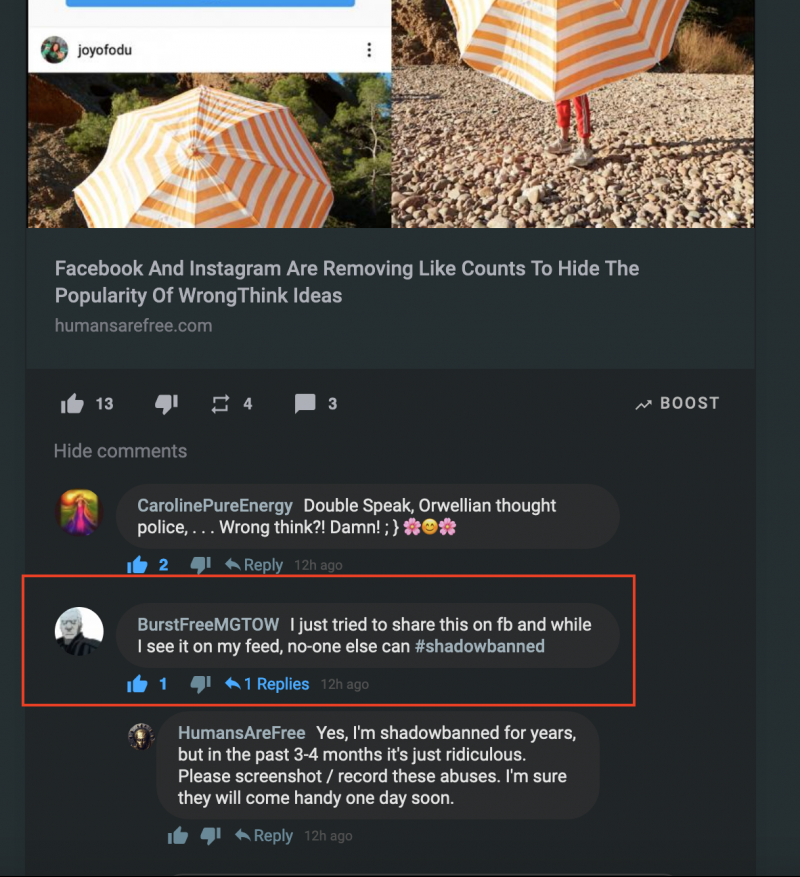 This is due to a coordinated attack on free speech from mainstream social media, as well as Google search and YouTube.

Back in December, when I wrote the article “Are We Allowed To Talk About Anything Of Importance, Anymore?“, things were not nearly as bad as they are today. Since, LondonReal has been attacked by YouTube and had their most-watched interview ever removed. David Icke has been deplatformed (his accounts were deleted) by both Facebook and YouTube.

Is this the end of Free Speech in America (and the all over the world)?

Please make sure to Subscribe to HUMANS ARE FREE via email, and please share my articles daily on your social media accounts and via email to your friends.