In Washington, D.C., protesters have vandalized and illegally occupied St. John’s Episcopal Church, which is located across the street from the White House, and is where President Donald Trump, several weeks ago, held up a Bible after vandals occupied it.

The church’s front exterior was occupied and vandalized, with the letters “BHAZ” spray painted onto the front pillars – the acronym for “Black House Autonomous Zone.” 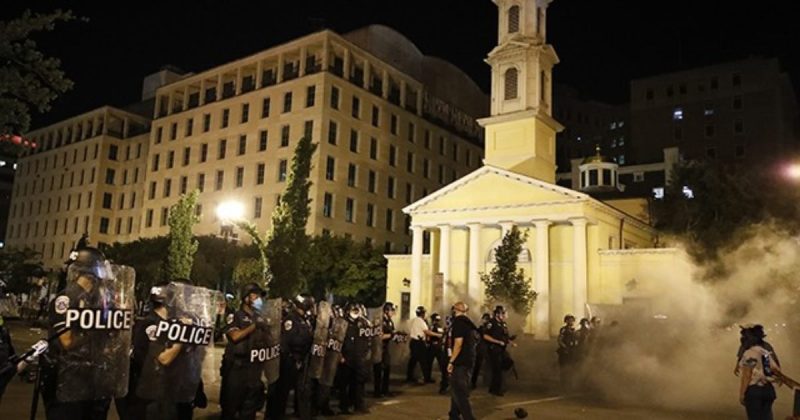 Several rioters interviewed by the Washington Examiner said that the establishment of BHAZ was a way of scoring restitution for Episcopalians who happened to be slave owners.

BHAZ — Black House Autonomous Zone — has been spray painted on the columns of the historic St. John’s church outside the White House. pic.twitter.com/or2C2myVSX

Fortunately, the damage done to St. John’s is only cosmetic, and once law and order is reestablished in the area, everything can be repaired and repainted.

However, in other parts of the country, the BLM rioters are dealing more permanent destruction on Christian symbols.

The Catholic priest is known as the founder and leader of the mission system. Serra was recognized by Pope Francis and the Catholic Church as a saint in 2015.

The Spanish Embassy defended Serra, asking the country to protect its “rich shared history” with Spain.

Catholic Archbishop of San Francisco Salvatore Cordileone issued a statement saying that the BLM movement has descended into “mob rule,” and that the once-peaceful protests that had sincere calls for racial justice for George Floyd and other victims of police brutality have been hijacked by opportunists, turning it into a movement of “violence, looting and vandalism.”

“Statues of Jesus are next,” said Matt Schlapp, chairman of the American Conservative Union. “It won’t end. Pray for the USA.”

Some of the anti-Christian sentiments are also coming from inside Christian organizations. Earlier in June, Monsignor Charles Pope, pastor at the Holy Comforter-St. Cyprian Catholic Church in D.C. was “canceled” after he led a religious procession and prayed for racial healing in front of the Emancipation Memorial.

In Boston, the Catholic Archdiocese of the area asked for the resignation of Father Daniel Moloney, who has served as a chaplain for MIT since 2015, after he wrote an email to students in which he questioned whether George Floyd’s death was racially motivated, that people need to treat each other with more charity and that “unfriending” and “canceling” each other over charges of racism will not bring about healing.

Furthermore, the BLM movement has been expanding their reach into Europe. The Black Madonna of Czestochowa in Breda, Netherlands, a monument dedicated to Polish soldiers in World War II who gave their lives defeating the Nazis, was spray-painted with the letters “BLM.”

Listen to this episode of the Health Ranger Report, a podcast by Mike Adams, the Health Ranger, as he talks about how the BLM movement is filled with people who are bullying Christians and conservatives who don’t want to bow down to their movement.

President Trump has vowed to sign an executive order that would protect federal monuments and other public statues from being vandalized or desecrated in any way.

This executive order would make the act punishable by jail time. While it’s still unclear what the punishment will be, Trump has said in a tweet that vandals should get “up to 10 years in prison” for destruction of federal property.

…..This action is taken effective immediately, but may also be used retroactively for destruction or vandalism already caused. There will be no exceptions!

On June 24, at a press conference Trump held with Polish President Andrzej Duda, he said that this “very strong executive order” will come out by the end of the week, and it will send a powerful statement to the BLM movement and to the rioters that vandalize and destroy America’s monuments.