Scenes of thousands marching in Chicago in a joint ‘Pride’ and ‘Black Lives Matter’ parade have raised questions about double standards in reporting and enforcing social distancing rules amid the Covid-19 pandemic.

Even though Chicago’s annual Pride Parade was officially canceled due to Covid-19 concerns, massive crowds gathered on Sunday in the Lakeview neighborhood and marched uptown to “reclaim Pride.”

Aerial footage of the packed event has drawn much criticism from those opposing the harsh lockdown measures and the apparent double standards in enforcing them. 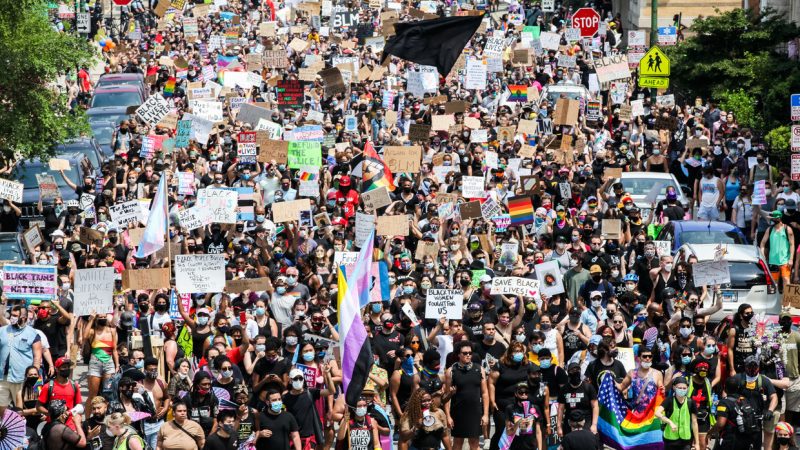 Thousands gathered in the streets for the Pride march in Boystown in Chicago, Illinois, June 28, 2020

Local authorities and mainstream media were blasted for ignoring or even “encouraging” particular gatherings, while painting the rest as a dangerous breach of social distancing rules.

Some hit back at the critics, insisting that the law-abiding participants of the march were all wearing masks, and arguing that the risk of contracting the virus outdoors is much lower.

I thought the media said mass gatherings were going to kill us all? “Murder,” they said…. https://t.co/kVqqbxt0ik

Maaaaaybe people are going insane because the media is simultaneously showing you images like this while the gov't shuts down your small business and insists you wear a mask or you're killing people. https://t.co/tj6Ev38w3i

Crowded mass protests against racism and police brutality sparked in hundreds of cities by the death of George Floyd may play a role in the recent jump in cases, with demonstrators largely defying social distancing guidelines.

Media coverage of the rise in infections, however, has focused almost exclusively on those gathering at bars and beaches (as well as Trump rallies and anti-lockdown protests), while virtually ignoring the massive BLM marches as a potential factor.

Most people who attended Trump's rally in Oklahoma came from outside Tulsa, hailing from at least 44 counties spread across 12 states.