Facebook has flagged our article “It’s all bullsh*t”: 3 links sinking the Covid narrative” as ‘false information’, based on nothing but a single ‘fact check’ website, which does not even claim the information is ‘false’, but merely quibbles over terminologies to justify claiming the information is ‘misleading.’ 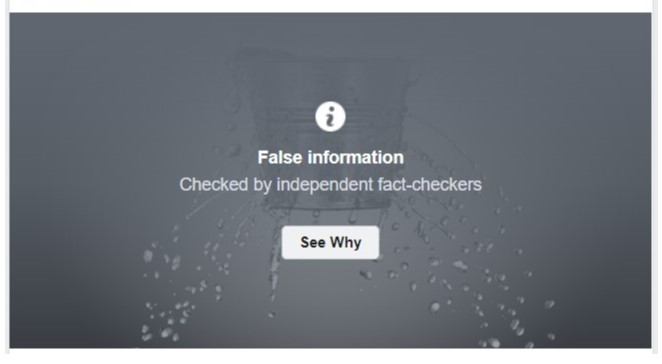 And if you click on the ‘see why’ button you get taken here, to the website of Health Feedback, an “independent fact-checker”.

Of course, they’re not independent – they’re actually funded by Facebook. They are also funded by the “Credibility Coalition”, an NGO focused on “common standards for information credibility”.

The Credibility Coalition are also funded by Facebook. And twitter. And google. And a whole host of unsavoury sounding NGOs.

So, with the idea that “health feedback” are anywhere close to “independent” firmly debunked, let’s see what they have to say.

Firstly, it’s important to note what is actually being “fact-checked” here.

In short, Facebook is well aware that 90% of the article is perfectly provably true.

In fact, it’s not our article they’re allegedly fact-checking, it’s another article in the publication NewsPunch, which relies on one of the same sources we do.

The “fact-check” is entirely devoted to just one of three leaks we describe – the report from German Interior Ministry employee – and even then focuses solely on its provenance rather than its content.

In essence, what is being “fact-checked” is not the report itself, but where it came from.

Nowhere in this ‘rebuttal’ does it claim the ‘German Ministry employee’ was lying or making provably false statements. Neither does it challenge the credentials, competence or honesty of the “independent scientists” who co-authored the report.

Instead, it uses diversionary language claiming the document’s main author, Stephan Kohn, was simply sharing his “private opinion” and was not authorised to speak for the government.

The author of the document is Stephan Kohn, a politologist and employee of Germany’s Interior Ministry in the KM 4 department for the Protection of Critical Infrastructures.

However, Kohn’s analysis was not requested by the Interior Ministry, as the article claims.

On 10 May, Germany’s Interior Ministry issued a press release stating that the employee had disseminated his “private opinion on the corona crisis management” and that the “elaboration was carried out outside the area of responsibility as well as without assignment and authorization”.

This approach should be hauntingly familiar to anyone who has been following the OPCW whistleblower story.

Where expert witnesses contradicting the official narrative on Douma were claimed to merely be “disgruntled ex-employees” who were in Syria of their own accord and “never part of the fact-finding mission”.

All these claims have since been shown to be lies.

In addition to these irrelevant obfuscations, the article uses weasel words to construct a flimsy counter-argument:

According to EuroMOMO, the number of excess deaths coinciding with the COVID-19 pandemic was twice the number that occurred during the unusually deadly flu seasons of 2017, 2018, and 2019 (Figure 1).

Note that they only back three years in time, and not all the way to 2000 or 1998, both of which had very similar excess death numbers.

Note also they say “coinciding with”, and not “caused by”.

This allows them to cite all the excess deaths in Europe, despite statistics showing that huge numbers the excess deaths were due to other causes – including the lockdown limiting access to healthcare and increasing poverty.

It is going full Orwell. And it is utterly disgusting.

This article simply does not offer any justification for dismissing our article reporting Kohn’s words as ‘false information’.

The information is NOT demonstrably false, it is merely contentious, in that the data is open to multiple interpretations.

And yet that is the label facebook has stuck on it.

Facebook is not suppressing this article because it contains false information at all, it is censoring it because it offers an interpretation of facts that does not support the current mainstream dogma.

This is censorship, pure and simple.

Here are the censorship-free social media accounts where you can find HumansAreFree.com:

Globalists Just Revealed That The 'Great Economic Reset' Is Scheduled for 2021 Previous post
Aborted Fetal Tissue in Vaccines: Babies Are Born ALIVE at 5-6 Months Old with Beating Hearts and No Anesthesia Next post