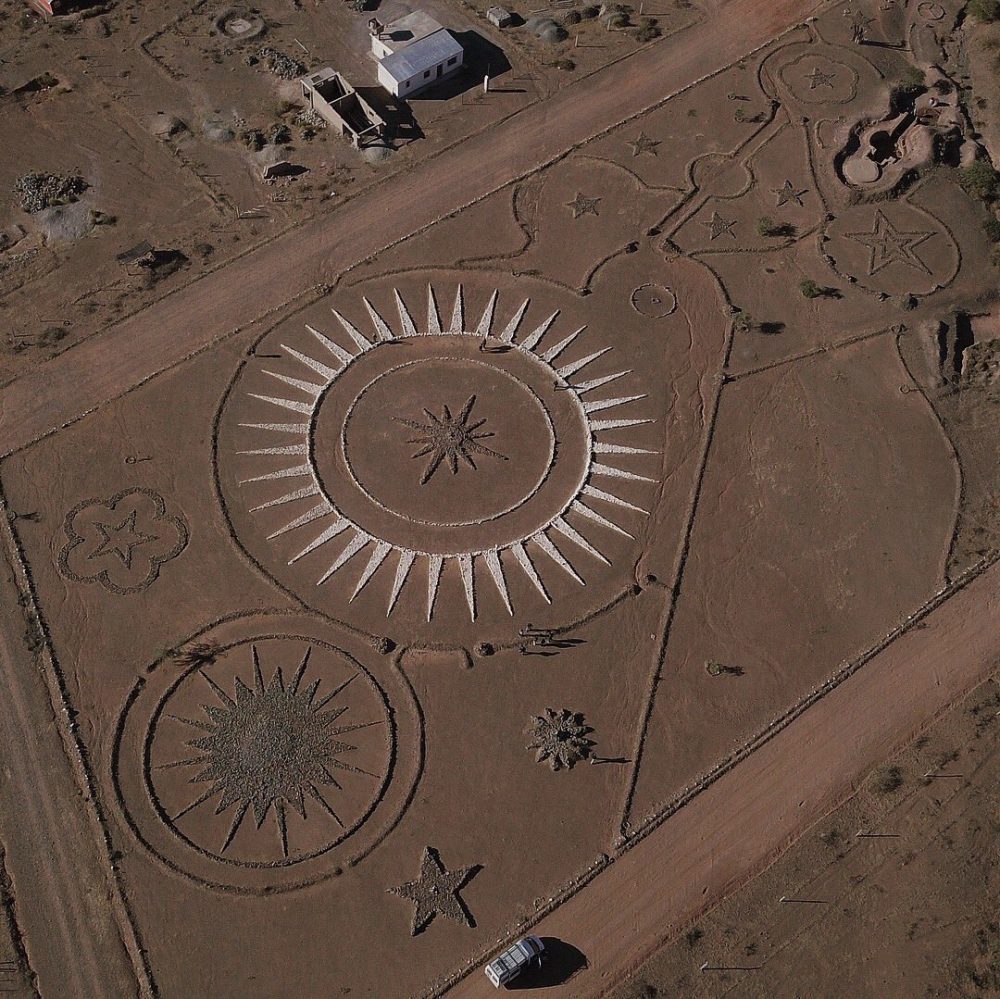 UFO sightings in Argentina have been frequent in recent years. The sightings follow the bizarre story of a man from Switzerland who traveled to the small town of Cachi to create a spectacular landing pad for aliens called an “ovniport.”

Similar to the Nazca Lines of Peru, the ovniport pattern is visible from the air.

The story of Werner Jaisli is mysterious since he seems to have disappeared from the news following completion of his beautiful design in an isolated Argentinian desert valley in 2012. 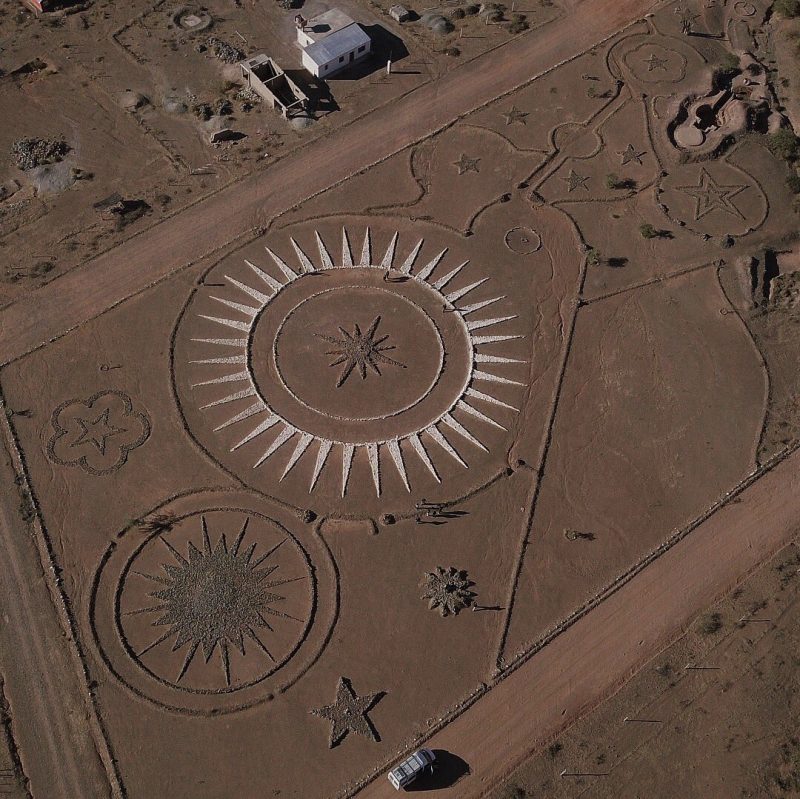 He started working on a huge star with 36 points in 2008. By the time he finished, it was over 157 feet across, with a smaller star of 12 points in the middle. Smaller stars and formations appear nearby.

The work began like some kind of alien Field of Dreams.

“If you build it, we will come there,” the beings told him telepathically.

The New Zealand Herald suggests some locals think he was taken away by the aliens.

“…soon after the ovniport was built, locals around Cachi stopped seeing Jaisli, who had a large beard and would often wear a Druid outfit.

“It is unclear where he traveled to but some locals joked that he may have been abducted by aliens. However, it is thought he actually went to Bolivia – with another theory that he traveled back to Switzerland.“ 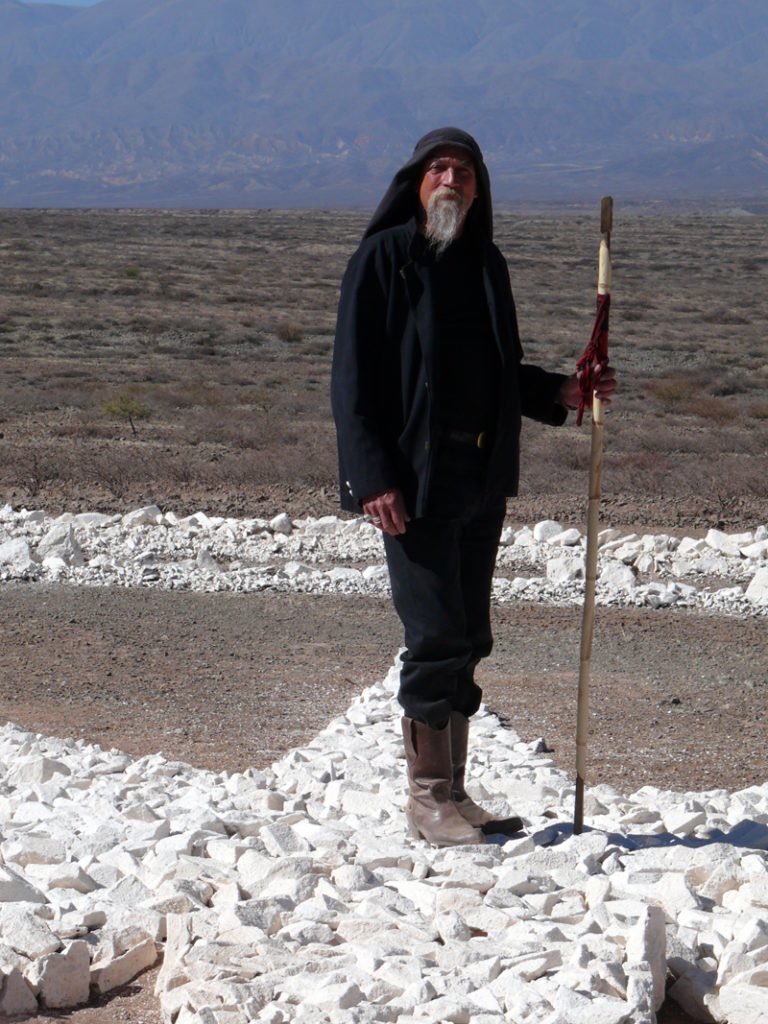 Werner Jaisli said he received a telepathic message from the aliens, instructing him to build the landing pad.

According to his description in an Argentinian newspaper, Jaisli sensed the arrival of the UFO before it happened, and could easily communicate through a powerful light.

“I was there, in Fuerte Alto with my neighbor Luis. It was midnight on November 24, 2008. A party was taking place at the Sports Complex. Suddenly everything was silent and the power supply was cut off. It was total darkness.

“It’s a UFO night,” I said to Luis. And the sentence had not ended when two luminous objects advanced about 200 meters above the Calchaquí River,” explains Werner.

“They were at the height of my eyes, from my position. They were solid, circular and looked like burnished metal. I do not know why, but mentally I asked them to come closer. And they did!

“They perched about 100 meters above our heads and projected over us a beam of powerful light. The funny thing is that this extraordinary glow did not affect our vision. At that moment something began to go through my brain: it was an order. They asked me telepathically to build a landing pad.”

In the Argentinian newspaper, El Tribuno, he described his alleged encounter with extraterrestrials.

“They landed about 100 meters above our heads and projected on us a beam of light that made us both see their own brightness.”

“The funny thing is that it did not affect our vision. Something began to bubble through my brain: it was an order. They asked me telepathically to build the airport.”

Since his disappearance, the “Intergalactic landing pad” has become a popular tourist attraction for the town of Cachi, while UFO sightings seem to have increased in other parts of Argentina instead.

Update: El Tribuno, an Argentinian news source reported that Werner Jaisli has returned to the area in July 2019. According to the translation from Google:

The Swiss Werner Jaisli returned to Cachi after five years to resume the construction of the UFO.”

“About the eccentric Werner nothing had been known for years and today he was finally seen again and confessed that he had to leave for a dangerous situation he lived and for which he could not say goodbye to anyone.

“This place has something sacred for me, I was sure that I should return,” he confessed to El Tribuno.“ 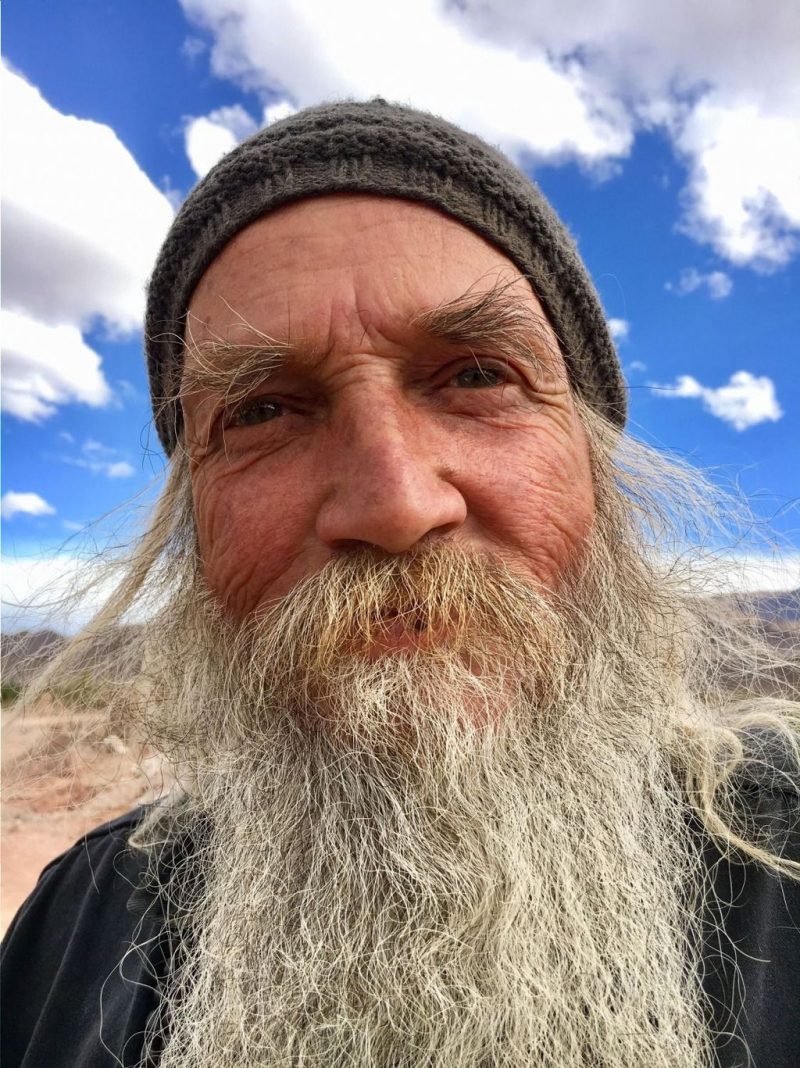 In 2018, a UFO appeared on live video during C5N news morning weather forecast in Argentina’s capital of Buenos Aires. The morning show hosts were baffled by the object, pointing to it and discussing what it might be.

Last month on May 7, 2019, construction workers in Buenos Aires took video from their cell phones of a strange “black ring” object hovering in the sky.

Express noted that Scott C Waring, a conspiracy theorist from the ET Database blog observed that the workers seemed to sense the presence of the UFO, looking right at it as it went over.

“Often when a UFO is nearby, people and animals sense its presence. I mean often they have an emotional aura that either pushes a person to look up and see it, or even make you relax almost in a trance meditative state.

“You have to seen one first had and feel it to know what I’m saying. Not all UFOs have this aura, but many do.”

“I remember a sighting by the famous actor Dan Aykroyd where he was sleeping he woke up as if someone wanted to wake him, and heard a telepathic voice telling him to walk outside and look at the sky. When he did so, he saw a UFO. That’s what I mean.”

Waring has discussed several other recent UFO sightings in Argentina since then, including a video of a classic silver disc seen on May 13.

Argentina continues to be a hot spot for UFO sightings. The mysteries continue to grow while the answers remain in the blurry shadows of poor-quality video footage. Meanwhile, where in the world is Werner Jaisli?

See more about the “Ovnipuerto Cachi” below: