Natural News has acquired a letter that was sent by the property manager to all 78 residents of the 7-story apartment building, which is located at 137 S. Palm Street in the City of Ventura, California.

The building caters to seniors and disabled residents and is government-subsidized housing.

We have confirmed the authenticity of this letter, which is shown below, with certain redactions to protect the names of the property managers who are being subjected to threats.

The letter warns that all residents of the building are ordered to appear at the “Palms Community Room” to participate in mandatory testing for covid-19 on July 17, 2020 (last Friday).

“All residents residing at 137 S. Palm MUST be tested for the Covid-19 virus. After testing has been completed, all residents MUST QUARANTINE in their unit until test results are received.”

In other words, the 78 residents of the building were ordered to subject themselves to covid-19 tests against their will, and then were essentially held prisoner in their apartments.

The letter continues, “Effectively immediately, the Palms building has been placed on lockdown.” 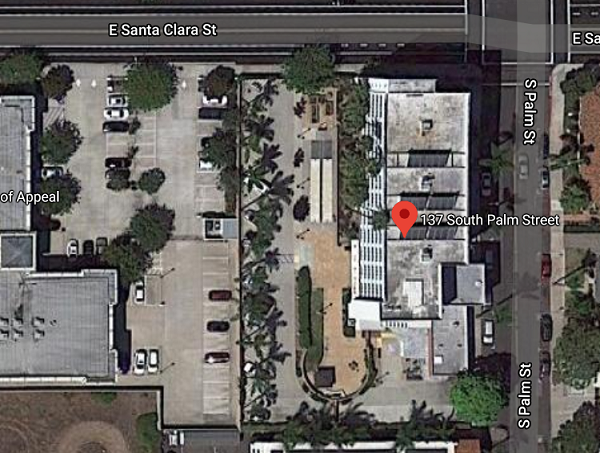 The letter further explains, “Except for essential workers, no one will be able to enter or exit the building during the lockdown.”

In addition, “Security personnel will be posted on all entrances of the building 24 hours 7 days a week,” the letter says. “All resident card keys will be deactivated during the lockout.”

In essence, 78 American citizens were imprisoned in their own apartment building in Ventura, California in a China-style “medical prisoner” crackdown scenario.

However, there is more to this story, and it also involves Ventura County, which actually initiated this lockdown (see below).

Once you read the letter she sent to building occupants, you might also experience anger and frustration. 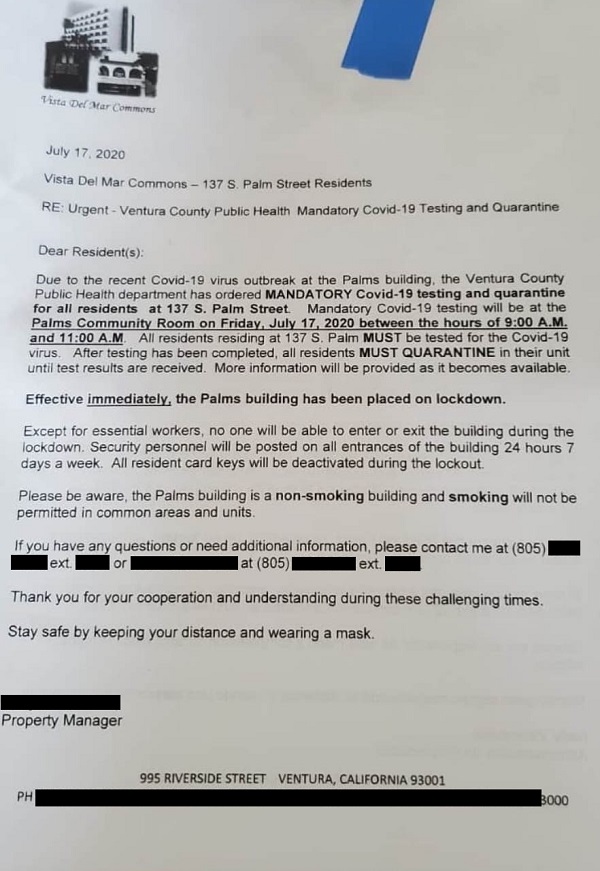 One resident called the police and declared he had been kidnapped

According to local sources, the letter was distributed to building residents in parallel with the County of Ventura declaring the building to be under a quarantine lockdown.

According to local sources, this notice from the Ventura County Public Health agency was received on Friday, July 17th, at 6pm, and it described an enforced “mandatory quarantine” for the entire building.

(It appears the enforcement order came from the County of Ventura).

The property manager had been working to alert the residents of the building to the fact that Ventura was about to demand the quarantine lockdown status until all building occupants were forced into mandatory covid-19 testing.

One resident reportedly became so frustrated that he called the police and declared that he had been kidnapped and was being held against his will.

Ventura County rescinded the mandatory quarantine order on Tuesday, July 21st, after the mandatory test results were received. Four residents out of 78 tested positive for covid-19, according to the test results.

Those four individuals are being ordered to self-quarantine for 14 days and are being monitored by the Public Health department of Ventura County.

Ventura county was initially alerted to the building by one resident testing positive during routine intake testing at the hospital.

Ventura County was then notified of that patient and their home address, which the county then linked to all the other residents in the same building. It appears this led the county to ultimately demand the quarantine lockdown.

It seems likely the property managers could have done a better job of explaining this in their letter, however, possibly avoiding some of the backlash they are now experiencing.

What this confirmed incident reveals is that at least one major county in California is now resorting to China-style tactics that smack of medical tyranny and violations of fundamental human rights.

It appears that residents at 137 S. Palm Street were, in fact, held as prisoners in their own homes, denied the ability to leave the building and forced into mandatory testing against their will.

In effect, the building became a kind of mini-FEMA camp for about four days, during which the residents of the building apparently had few rights.

We are told that building property managers organized call-in checks to make sure every resident was called each morning to see if they had any urgent needs that weren’t being met (such as food, medical supplies, etc.).

It’s not clear who, exactly, was involved in making these check-up calls.

All this begs the question, though: Since when did the residents at this building sign any document waiving their constitutional rights as Americans?

Under what authority are people now held prisoner in their own homes and ordered to subject themselves to flawed medical tests that may cause them irreparable financial harm and health harm if the results are incorrect?

Merely testing positive for covid-19 can result in people being subjected to lockdowns, job discrimination, social discrimination and long-term medical hassles merely for having a covid-19 “positive” test result on their record.

In the building mentioned here, 74 out of 78 residents tested negative, yet they were subjected to medical tyranny lockdowns and mandatory tests nonetheless.

People who test positive — even if the results are false — may also be subjected to hundreds of thousands of dollars in medical costs even when they never had covid-19 in the first place, and if they are unlucky enough to be placed on a ventilator, that may even be killed by doctors and hospitals who collect extra funds for each covid-19 death they experience.

That this sort of draconian lockdown is now happening in the United States of America is a stark warning for all Americans: None of us are safe while the covid-19 tyrants are in power.

Medical tyranny is spinning out of control across America

All across America, we are now seeing gross abuses of power, with one couple now subjected to house arrest and prisoner-style ankle bracelets for merely refusing to sign draconian social distancing “consent decree” documents.

(By what law does the government now force private citizens to sign illegal documents that deprive people of their rights?)

It also begs a bigger question about the right to self-defense.

If you are kidnapped by the government and made a prisoner in your own home against your will, and forced into medical experiments or testing against your will, do you not have the right to defend your life against such acts of aggression using all legal tools that might be available?

Could a resident who is kidnapped and imprisoned against his will rightfully decide to pick up his rifle and literally shoot his way to freedom to escape his captors?

Must Americans now surrender all their rights to the tyranny of the state merely because the left-wing media wishes to push never-ending hysteria about a pandemic that we now know can be prevented with vitamin D and very successfully treated with hydroxychloroquine and zinc?

Are we now watching the creepy line of medical tyranny shift from mask mandates to at-home prison sentencing even for those who agree to comply with all the demands of the state?

These are questions that desperately need to be answered with courage by people of principle. If we do not have the right to control our own bodies, homes and personal mobility, then we are not free people at all.

We are slaves to a fraudulent, deceptive medical regime that respects nothing except the profits to be generated from the jjabs that are already being marketed with covid-19 mass hysteria.

Now in 2020, human beings are simply exploited as pawns to ratchet up the hysteria to unprecedented levels, in complete contradiction to the fact that we now know how to halt the pandemic and cure most of those who are infected.

We have the answers, but the answers are being systematically censored by Google, Facebook, YouTube and Twitter, all conforming to the obedience demands of the corrupt CDC and the Fauci-like drug cartel profiteers who stand to pocket hundreds of billions of dollars in jjab profits if they can just keep the panic aloft a little longer.

The people are nothing but useful idiot pawns in all this, from the point of view of the Big Pharma controllers who now run the media, the science journals, the CDC and the FDA. To them, human rights don’t matter.

Even sacrificing human beings as guinea pigs is of no consequence to these Big Pharma monsters. They care about nothing except using fear to generate revenue. And if entire buildings full of innocent people have to be locked down to achieve their profit goals, then so be it.

America has descended into a “pharma state”

As I have repeatedly warned for literally the last 20 years — during which I have been incessantly censored, smeared and attacked — America has now descended into a “pharma state” that’s almost entirely run by Big Pharma profit interests.

Everything you are seeing unfold in this nation is coordinated to achieve a singular goal:

Maximum profits for Big Pharma at any cost, including the deliberate sacrificing of potentially millions of lives, if necessary, in order to maintain the death counts, hospitalization rates and never-ending fear that drives the jjab drug cartels.

This is why entire buildings full of Americans are being locked down. It’s not about stopping a virus; it’s about maintaining the necessary level of medical terror to maximize jjab profits in the months ahead.

FEAR is the marketing weapon of Big Pharma. Science be damned. Human freedom be damned. Rationality be damned.

They will do whatever it takes to keep you living in fear and nutritional ignorance so that no one has access to cures that work, forcing everyone to be corralled into the Big Pharma trap of jjabs and mass medication, even while readily available cures already exist (and cost merely pennies per dose).

We are all now living under a criminal cartel of fake science medicine that recognizes no value whatsoever in human dignity, freedom or individual choice.

To the pharma criminals, you are nothing but a walking dollar sign, a biological cash machine that they can convert into money by keeping as many people as possible infected, hospitalized and fearful.

All cures are censored.

All those who speak of cures are silenced via a conspiracy of censorship. Any legitimate solutions for humanity are attacked with a kind of quack science fanaticism that has already swept across The Lancet, the New England Journal of Medicine and even Nature science journals.

Big Pharma is now the enemy of humankind. And unless this dangerous enemy of defeated and destroyed, humanity will never be free from pandemics, biological weapons, mandatory jjabs and wave after wave of engineered fear.

Because they will never stop terrorizing us all, as it works so well to fill their pockets with easy cash.

Perhaps it’s time we quarantined Big Pharma so they can no longer terrorize the rest of us with fake science and quack medicine.

Maybe it’s time to flatten the fraud and end the pharma fear campaigns once and for all.

The Technocratic Coup is Advancing Rapidly – Is this the America You Want? Previous post
FDA Approved, DARPA Funded, Under-the-Skin Biosensor to Detect Signs of Illness Next post