J.P. Morgan and the Federal Reserve: Who Sank the Titanic?

When the most tragic events occur in our lives, we do our best to make sense of them. We might blame God, bad luck, our secret desires, or the twins, fate, and destiny.

When it comes to the most dramatic events in our planet’s most recent history, the sinking of the R.M.S. Titanic often tops the list.

Was the sinking of this technological wonder a spell of bad luck, poor workmanship, a sleepy captain? Or does the truth lie in a Titanic conspiracy theory?

It was the maiden voyage of one of the largest and most luxurious ships in history. Wealthy socialites, celebrities and business tycoons resided on the upper decks.

Each room was adorned with private baths, opulent furniture, attentive butlers, and the accoutrement of kings. These lavish suites were stunning.

Those considered to be of the lower classes stowed away in the most humble of accommodations. With the bare minimum in each of their crowded cabins, they were relegated to group bathrooms shared by many.

Catching all classes and crew members by surprise, between April 14 and 15, 1912, and amid a moonless and windless night, the Titanic barreled into an iceberg, hemorrhaged its side and began sinking.

Within hours, 68% of the 2205 passengers were dead. Even if every lifeboat space was used, only 53.4% would have survived.

When you break down the losses by class, it’s disturbing. Only one child from First Class perished, while steerage lost 49 of its youngest.

This may have caused substantial damage, but it would not have sunk the ship. The ship expired because the iceberg sliced a long section of the side of the vessel, which was catastrophic.

“The sounds of people drowning are something that I can not describe to you, and neither can anyone else. It’s the most dreadful sound, and there is a terrible silence that follows it.” — Eva Hart, Second Class Survivor (Lifeboat 14)

JP Morgan, The Titanic, and The Federal Reserve

Was the Titanic sunk on purpose? The White Star Line company built the Titanic, which was owned by American banker, J.P. Morgan.

At the time of Titanic’s sinking, the multi-millionaire was one of the most powerful people in the world.

This theory suggests that Morgan wanted to kill his rivals. They may have wanted to dismantle the Federal Reserve, a vehicle that Morgan had learned to manipulate to his benefit.

While Morgan had a ticket for the voyage, he never boarded, canceling last minute. Meanwhile, Jacob Astor, Isidor Straus, and Benjamin Guggenheim all perished aboard the unlucky ship.

The challenge with this theory is that Straus supported the Federal Reserve, at least in public, while Astor and Guggenheim never made their feelings known.

The known quarrel between this group of moneymen was likely real, although we might never know if the Titanic’s sinking was a planned final blow.

Some conspiracy theorists believe that the Titanic didn’t sink. These folks say that Titanic’s sister ship, “The Olympic,” had sailed from England to New York in September 1911, and was forced to return for repairs to the Belfast shipbuilder, Harland and Wolff.

While the ship was seaworthy, additional repairs were required through March 1912, a few weeks before the Titanic’s maiden voyage.

This theory rests upon a simple idea: The Olympic’s owners switched the two ships with the hope of receiving the payout from the more lucrative, Lloyds of London policy on the Titanic.

With a litany of holes, this concept neither treads or holds water very well. The idea of ditching a damaged ship to reap a limited insurance reparation, while killing loads of people in the process, seems a bit far-fetched.

Meanwhile, Lloyd’s of London claims that the Titanic was insured for just over £1m. They also state that they paid every claim in full, within 30 days.

Their loss in today’s money would be over £100m, one of the largest losses in history. While the purpose of the switch was to rescue the White Star Line from bankruptcy, the Titanic was most likely under-insured.

This means that if every claim was satisfied, the result was a net-loss.

“The evidence is overwhelming; eyewitnesses themselves describe running along Titanic’s decks, but where they said there were promenades, there should have been cabins,” he said, adding:

“While survivors on B Deck described seeing lifeboats being lowered from above, there’s no way they would have seen that on Titanic – only on the ship Olympic.” — Richard Gardiner, in his ‘Titanic: The Ship That Never Sank’

Swapping The Ships Titanic and Olympic To Save Face

Murdoch’s first-hand experiences were documented by Robin Gardiner (1947 – 2017), author of “Titanic: The Ship That Never Sank.”

Gardiner’s idea is that the Titanic and her sister ship, The Olympic, were switched soon after a collision involving the Olympic and a Navy warship.

He notes that, because the two ships were twins in appearance, the Olympic could be easily dressed and disguised as the Titanic. 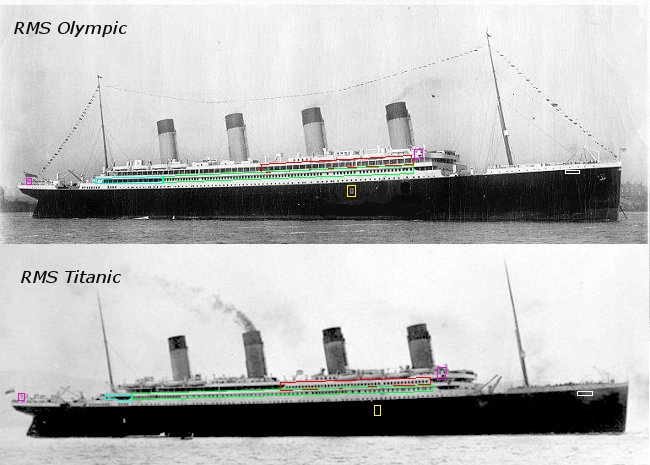 Gardiner and others report that this charade was not only an insurance scam, created by the International Mercantile Marine Group (I.M.M.), owners of The White Star Line, it was I.M.M.’s only option to save their reputation, along with several financing deals in play.

When the Olympic collided with the Royal Navy’s H.M.S. Hawke, the Navy deemed that the Olympic was at fault, although eyewitnesses passionately defended the opposite.

As Gardiner’s theory goes, Lloyd’s of London did not pay the insured their damages, even though the ship required extensive repairs.

Since the Titanic was behind schedule, and according to Gardiner, I.M.M. decided to masquerade the damaged Olympic by converting it into the Titanic.

Later, they would quietly re-launch the Olympic into service. Given the incredible list of similarities between these sister ships, on the surface, this theory has merit.

While every vessel in the White Star fleet had their names engraved into their hulls, the Titanic was the only ship that had her name inscribed using surface rivets, added to the ship at a later date.

According to Gardiner, the Titanic never hit an iceberg; it collided with the S.S. Californian, also owned by J.P. Morgan.

Following the swap, the Titanic spent the next 25 years in service as the Olympic, which was decommissioned in the mid-1930s, so the story goes.