Pizzagate 2.0? Wayfair Forced to Deny That its ‘Overpriced Cabinets’ Are Child Trafficking Front

Furniture marketplace Wayfair was forced to address accusations of sex trafficking after an elaborate PizzaGate-esque conspiracy drawing connections between the names of ‘overpriced’ items and ‘missing children’ went viral.

The speculation was apparently kicked off on Reddit with user PrincessPeach1987 posting a screenshot of the furniture seller’s WFX Utility cabinet collection to the site’s r/conspiracy forum that highlighted the sky-high prices (between $12,699.99 and $14,499.99 for a single cabinet) and the odd names – like Samiyah, Alyvia, Yaritza, and Neriah – which allegedly matched the names of missing children.

“Is it possible Wayfair involved in Human trafficking with their WFX Utility collection? Or are these just extremely overpriced cabinets?” she asked.

Amateur sleuths combing Wayfair’s site immediately found oddities well beyond the cabinets section, including absurdly-priced throw pillows and “one of a kind” rugs that also appeared to share the names of missing children.

The rumors quickly spiraled out of control on social media, with some confused users claiming Wayfair was actually shipping trafficked children inside the pricey cabinets – something absent from the original posting – while others suggested plugging the SKU numbers of the suspect merchandise into a search engine would turn up photos of the child “for sale” under a particular product name.

Still others observed Wayfair had started scrubbing its site of the “incriminating” material – surely an admission of guilt!

People are suspecting that they're selling people in these large boxes/storage cabinets on Wayfair. They all are the same product but have different names, all female names. And they are all priced $10-15k more than the cabinet sold elsewhere. #ChildTrafficking pic.twitter.com/xD1PEY8RfN

Despite a lack of any factual proof behind the disturbing allegations, the story got so much attention that Wayfair issued a statement denying them.

A site spokeswoman told Fox Business the company had “temporarily removed the products” in order to “rename them and to provide a more in-depth description and photos” to justify the high prices.

“There is, of course, no truth to these claims,” the statement read, calling the items “accurately-priced” and citing their “industrial grade” as the reason for the high dollar amounts.

"There is, of course, no truth to these claims. The products in question are industrial-grade cabinets that are accurately priced. … The supplier did not adequately explain the high price point [and] we have temporarily removed the products from site…"

And “industrial grade” throw pillows too. Oh wait, you just did an emergency update to rename them and changed the price too. That’s some deep discounts🤷‍♂️ But why change the names too? Nothing fishy, sure. pic.twitter.com/K8q2lUMTox

Similar “utility-grade” cabinets to those sold on Wayfair’s site retail for under $1,000, and while a few users ventured that the absurd prices were in lieu of listing the items as “out of stock,” others pushed back against that explanation.

That still doesn’t explain all the matching names. The match missing children. Guilty

Please 🙄 I operate plenty of shops for companies way smaller than Wayfair, and there’s plenty of ways to take an out of stock product off the site without pricing it at $15,000+ wtf. It sounded good https://t.co/vLf7zXFB5Z

Unsurprisingly, the company’s denials only fueled further speculation, as pedo-hunters demanded to know why Wayfair was changing product names and memory-holing the “evidence,” while others merely rolled their eyes at the idea of taking the site’s word on whether or not it was trafficking children.

As someone who worked at one of the top 3 ecommerce platforms, I can state that extremely overpriced items are certainly a vehicle for money laundering.

Several pointed to the rapid-response “fact-checks” by Snopes and the Poynter Institute as “proof” Wayfair was up to no good.

That's like asking a robber of a bank if he was involved in any way with the robbery.
Statement from a liar: "Absolutely Not"
Newsweek: Oh! OK then! The End.

A glitch, they did an extremely poor job explaining that, as they didn't mention any other products unreasonably priced. They also were very vague. Just saying "its industrial grade" is not an explanation, it just shouldn't cost so much! But "of course it not true" LOL

The furniture retailer has come under fire before, facing a boycott and an employee walkout over selling beds to the Trump administration’s immigrant detention centers. 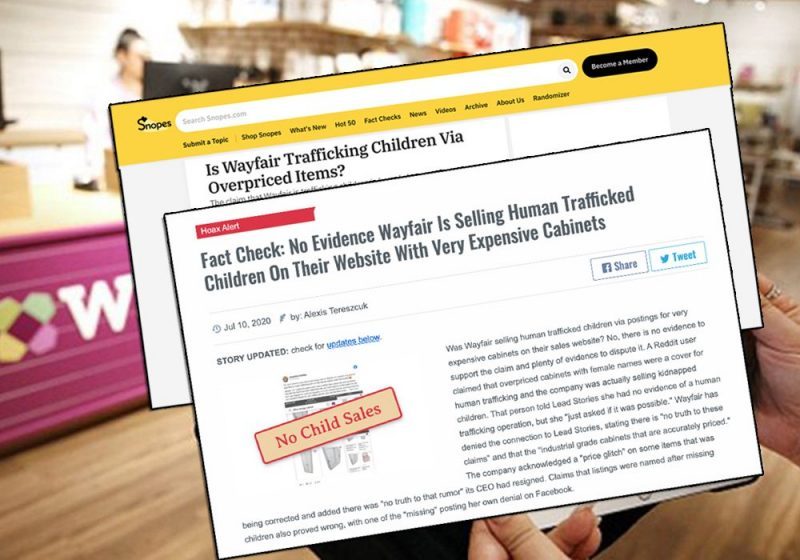 You are being told the Wayfair human trafficking allegations are false, there’s only one problem: fact-checkers can’t possibly know that as no investigation has been done. So why are they saying it?

What happened: Fact-checkers were quick to arrive on the scene when allegations emerged that Wayfair was trafficking humans through the sale of extremely high priced items. It all began when a Reddit user noticed some industrial cabinets were priced at $10,000+, and had different female names for each.

“Is it possible Wayfair involved in Human trafficking with their WFX Utility collection? Or are these just extremely overpriced cabinets? (Note the names of the cabinets) this makes me sick to my stomach if it’s true,” one Redditor user named PrincessPeach1987 posted.

This erupted into a massive online investigation that returned more products priced over $10,000, also with female names. This included desks, pillows, shower curtains and more. As it began going viral on Facebook, fact-checkers jumped in to quickly debunk the story.

LeadStories, a company we have dealt with many times in the past, was quick to say this wasn’t true.

How did LeadStories perform a full on FBI-like investigation to find out this wasn’t possibly happening? They asked Wayfair. Lead Stories claims:

“Wayfair released a statement to Lead Stories on July 10, 2020 after the claim went viral, denying the connection to human trafficking.

“There is, of course, no truth to these claims. The products in question are industrial grade cabinets that are accurately priced. Recognizing that the photos and descriptions provided by the supplier did not adequately explain the high price point, we temporarily removed the products from site to rename them and provide a more in-depth description and photos that accurately depict the product to clarify the price point.”

Snopes was no different, claiming the whole idea is ‘False’, asserting that:

“The claim that Wayfair is trafficking children is based almost entirely on one person’s confusion over an expensive cabinet. This conspiracy theory, like so many conspiracy theories, started with a wild and unfounded assumption that would be sickening if it were actually true. As of this writing, absolutely no credible evidence has been offered to back up this accusation. “

It’s like saying “a man was seen running away from a crime scene where someone was just shot. Police asked the man if they shot him, he says no, investigation over.” Did the man shoot him? We don’t know, we should investigate, not simply call the whole story false.

Why it Matters: What I found interesting about this is how quickly a fact-checker was able to debunk such serious allegations where there have literally been no facts to do such a thing.

Would someone guilty of serious allegations come out and admit to doing it? If they deny it, do we suddenly believe them?

Innocent until proven guilty is one thing, but saying the whole story is false is simply misleading. And that’s what many fact-checkers do.

We spoke about yet another story with an emerging “fact-checking” website called ‘The Dispatch”. They tried to claim our article about the COVID-19 being on the threshold of the CDCs ‘epidemic’ status was false. We told the whole story here.

How do they know this? What investigation did they do outside of believing Wayfair? Is this fact-checking or is this simply reporting on statements from corporations?

What does this lead the public to believe? Is the story true? Or is this just another crazy conspiracy theory that no one in mainstream media or fact-checking has actually taken the time to investigate?

The fact is, many people on the internet who are sharp, grounded in their approach and who truly investigate, are better journalists than most mainstream journalists – including fact-checkers.

The reason why all of this is so important to realize is because we are literally being told something is bogus based on no investigation, and this creates a culture that is completely uninformed to what is actually going on.

We allow a ministry of truth to shape our perception – not facts.