Another day, and another piece of media is circulating the web that depicts a child in an uncomfortable situation. This time a drag queen dances suggestively for a small girl.

The video, uploaded on Tiktok, opens with a scantily clad male with his rear cheeks hanging out, crawling on hands and knees towards the child sitting in a chair.

Taking on the air of a scene from a strip club, patrons of the restaurant clap and cheer. 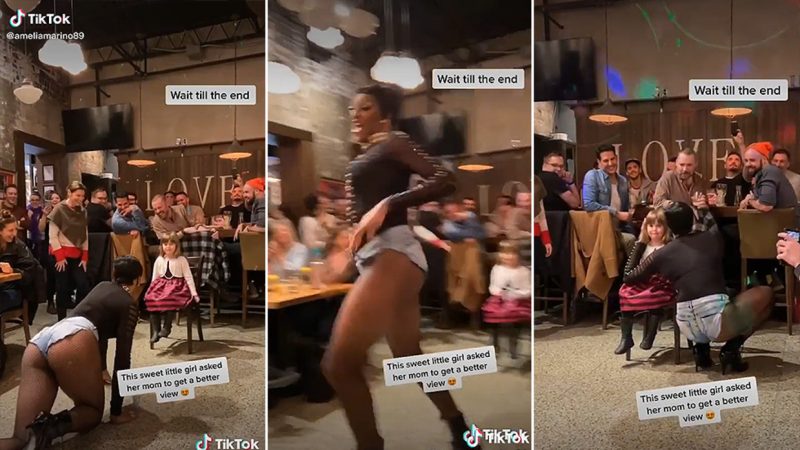 He then stands up with his short shorts, leaving little to the imagination, dances a bit, and then kneels next to the girl, as he says something to her while jiggling his booty.

This most recent event is yet another incident in a long list of them that have occurred throughout the past couple years.

Girls at Pride events have engaged with men partaking in pup-play.

A child drag queen named “Lactatia” of all things, stood for a photo op next to a naked man. Another drag kid named Desmond danced on stage in female attire as men threw money his way.

LGBT[Q] activists want you to believe this is not only normal, but that it’s a step in the right direction towards individual self-expression and queer acceptance.

People within the media go so far as to tout drag kids as stunning and brave, and drag queen story time is pushed to the masses within progressive woke culture.

But when it’s hard to tell the difference between child grooming tactics and progressiveness, a huge problem arises.

What these people fail to realize is that they’re not helping LGBT causes. I refuse to believe that any rational person is looking at the current state of things and rooting it on.

This belief is seemingly backed up by reactions online. The videos and images depicting events like those described above are met in large number by disgust.

As previously reported on, even the videos of the drag children we’re led to believe are influential entities are greeted by downvotes and comments worried about their futures.

As an LGBT individual myself, this culture the left is permeating affects me greatly. With much of the media swaying towards the “progressive” side of things, the public sees queer people as depicted by the media elite, and how they’re choosing to show us is as nothing more than sexually deviant perverts who want to fondle your children.

I can attest that we’re not all like that, although, alarmingly, the people they’re highlighting are very much real, as are the reactions from the fringe left who clap it on.

Watch the TikTok video and not a single adult has a horrid expression on their face. They’re cheering on a male sexually advancing on a young girl. I don’t know what this says about them, but it says nothing about me.

If that is what LGBT culture has become, I want nothing to do with it.

I am ashamed to be associated with them, but death by association is not going to drag me down, because I denounce all of this, and I hope more level-headed people begin to speak up soon.

For if they don’t, the resentment the left is creating towards gay people is only going to set us all backwards.