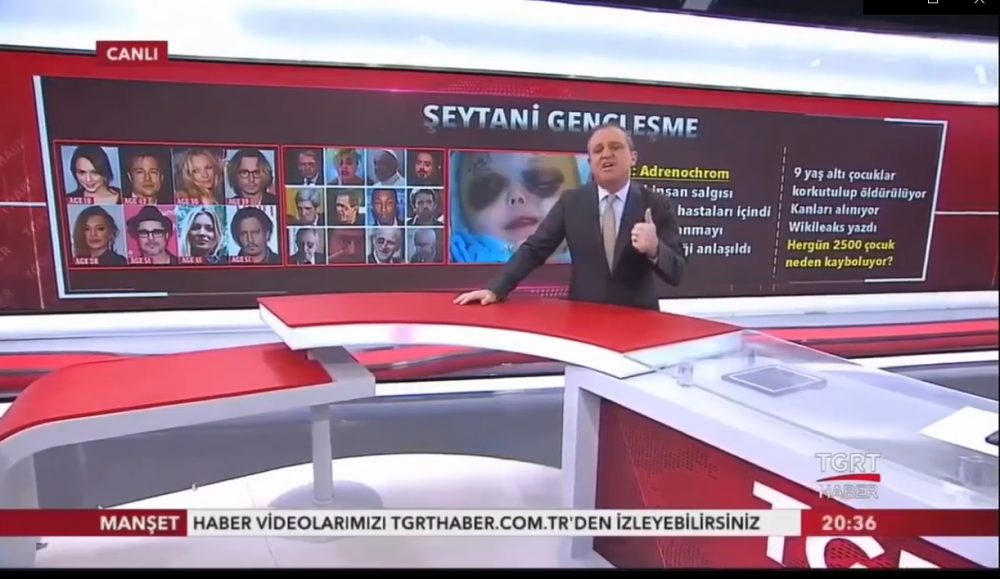 What was once taboo to discuss and was formerly relegated to the “conspiracy theories” parts of the darkest places on the Internet, is now becoming mainstream: the harvesting of blood from children and babies and marketing products derived from them to allegedly help people stay young, and theoretically give them immortality. 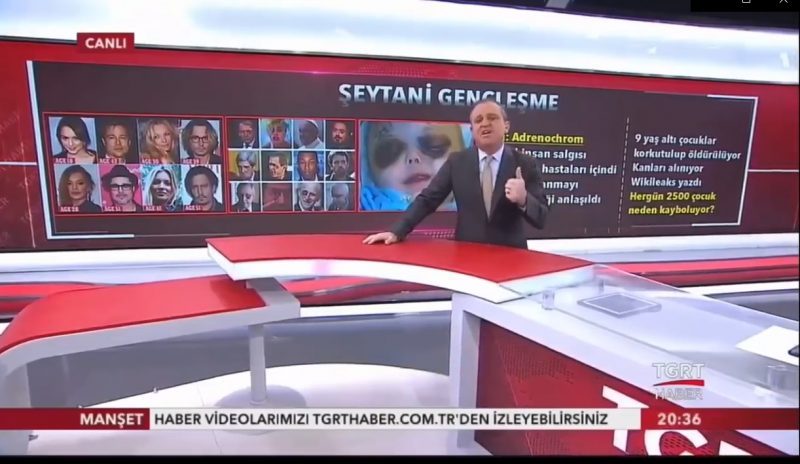 The Sun published a review of the series earlier this week:

From daily sessions in sub-zero cryo-chambers to stem cell injection and transfusions of teenagers’ BLOOD, their bizarre attempts to become superhuman have fuelled a multi-million dollar industry.

It may sound like something out of a sci-fi novel, but there’s a growing band of Silicon Valley billionaires who believe they can achieve eternal life through “biohacking” – the process of making alterations to your body to keep it younger.

Netflix’s new drama Biohackers, released on Thursday, (Aug 20) seizes on the terrifying trend by imagining a secretive lab where a young student, played by Luna Wedler, discovers a sinister experiment using the techniques on an entire town.

Here we meet the real Silicon Valley biohackers – the men who want to be immortal.

Paypal founder Peter Thiel has a gruesome plan to achieve eternal life – by injecting the blood of teenagers.

The practice, known as parabiosis, is not as impossible as it seems – in 2016, a start up firm called Ambrosia started offering transfusions of “young plasma” for £6,000 a time.

The billionaire mogul, 53, has said: “I’m looking into parabiosis stuff, which I think is really interesting. This is where they did the young blood into older mice and they found it had a massive rejuvenating effect.”

It’s not known whether Thiel has acted on his impulse but he has previously admitted to taking human growth hormone to slow his decline into old age, and he stands against the “ideology of the inevitability of death.” (Source.)

As the press review of this new Netflix drama reveals, this is NOT science fiction. It has been happening for years now.

In fact, the practice of harvesting blood plasma from children and babies has apparently been so widespread, that the FDA had to issue a warning about it last year.

The Verge ran an article on March 26, 2019 titled: Everything wrong with the young blood injection craze:

Recently, the US Food and Drug Administration made a somewhat strange request: please don’t buy transfusions of young blood plasma to improve your health.

The announcement is a conclusion of sorts to years-long hype over the tantalizing possibility that the fountain of youth can be found in the bodies of other people.

To find out why that’s not exactly the case, we spoke to Irina Conboy and Michael Conboy, a husband-and-wife research team at UC Berkeley.

Back in 2005, the Conboys published one of the landmark papers that kicked off this hype — but the research wasn’t looking at blood transfusions and it wasn’t exactly done in humans.

That didn’t stop companies like Ambrosia Health from promising that a couple liters of blood (at $8,000 a pop) would reverse aging, even though the procedure was more likely to put people in danger.

The latest Verge Science video covers this odd story, which is about real science, overgeneralized results, lots of high hopes, and people trying to make a quick buck. (Source.)

Also read: Elites Openly Paying To Ingest The Blood Of The Young

And while the coverage by The Verge was negative, trying to discourage people from practicing this, you can find plenty of positive reviews of the practice online as well, such as this lecture given on the popular TED Talks platform in 2015 by Tony Wyss-Coray, PhD, Professor of Neurology & Neurological Sciences at Stanford: How young blood might help reverse aging. Yes, really.

He discusses his own “unpublished” work of injecting human “young blood” into mice.

Here is another video from 2015 discussing the same thing, and referencing an article published in The Smithsonian Magazine titled: Vampire Healing: Young Blood Can Mend Old Broken Bones.

Related: A Controversial Treatment Allows Older People To Fight The Effects Of Aging With Young Blood

And while the new Netflix series being launched today might be “fictional,” there could be a higher purpose and motive involved in airing this series, as BuinessWire, A Berkshire Hathaway Company, also came out with a press release today claiming that the new Netflix series is being “stored in Twist’s synthetic DNA,” the first time “a leading entertainment provider has embraced the vast possibilities of DNA from imagination to storage.”

Twist Bioscience Corporation (Nasdaq: TWST) today announced that for the first time, an episode of a Netflix Original Series has been stored in Twist’s synthetic DNA.

“Many important documents, music and videos have been encoded and stored in DNA, but this is the first time a leading entertainment provider has embraced the vast possibilities of DNA from imagination to storage,” said Emily M. Leproust, Ph.D., CEO and cofounder of Twist.

“It’s exciting to ground the fictional series, which expounds beyond the boundaries of what is possible with DNA today, with the reality of preserving groundbreaking cultural media in synthetic DNA. The ability to store digital data in DNA seems futuristic, but the future is now.”

DNA is the oldest coding system known to science, and we are only now beginning to explore the possibilities available to advance science through synthetic biology. The new show, BIOHACKERS, investigates some current opportunities as well as future possibilities, engaging imagination and creativity.

Released today exclusively on Netflix (NASDAQ: NFLX) and starring Luna Wedler and Jessica Schwarz, BIOHACKERS is a gripping science thriller. The six-part series by showrunner and director Christian Ditter (“How to be Single”, “Love, Rosie”, “Girlboss”) deals with biological interventions, genetic modifications and the exciting possibilities in the field of engineering biology. In connection with the launch the new Netflix Original Series, scientists at ETH Zurich encoded the first episode of BIOHACKERS from ones and zeros into a sequence of the four nucleic bases adenine (A), guanine (G), cytosine (C) and thymine (T) – the building blocks of DNA. This code is then built, base by base into strands of synthetic DNA by Twist Bioscience to store the series for thousands of years. (Full Article.)

Adrenochrome: Harvesting Baby Blood just After They are Literally Frightened to DEATH

We have previously covered over the years the horrific practice of child sex trafficking among the rich and powerful. We have revealed that this practice has its roots in the Occult, with Satanic Ritualistic Abuse.

In our article previously published earlier this year here on Health Impact News, Unmasking Who is Behind the Plandemic and Rioting to Usher in the New World Order, we feature the testimony of two former Intelligence Officers who confirm the existence of these pedophile networks that are involved in Satanic Ritualistic Abuse (SRA): Ted Gunderson, a former FBI Chief, and Robert David Steele, a former CIA Agent.

If you have not read this article yet and watched the embedded videos, I encourage you to do so, so you can understand that these Satanic Occult practices are very real.

Mr. Steele’s testimony includes references to the harvesting of children’s blood just before they are murdered as a sacrifice to Satan:

I recognize now that child torture, child murder, and child organ harvesting is an ‘accepted’ practice at the highest levels of government, the NGO and multinational corporate sector, as well as throughout academic institutions and civil society.

This scourge persists because it is allowed to exist by the complicit authorities.

It appears that pedopredation – including the attendant torture and murder of infants to produce adrenalized blood via ritual Satanic abuse – is in some cases considered an elite ‘privilege’ whereupon these echelons are permitted to practice such perversity with impunity.

Add to this the growing market in fetuses, the most prized being those delivered on the floor as part of a Satanic ritual, and one has an inkling of the greatest evil on the planet. (Watch his testimony here.)

The drug that is allegedly produced from this “adrenalized blood” from infants that are murdered, is called “Adrenochrome.”

In addition to all the alleged benefits discussed above for “young blood” as a way to reduce aging, this drug is reported to give the most euphoric “high” of any drug known to man, and is also allegedly the most addictive, requiring a fresh supply of this adrenalized blood from murdered infants.

At the end of June this year (2020), a mainstream Turkish television news broadcast decided to expose Adrenochrome, a drug said to be used by the rich and famous.

Since it’s airing, many Turkish independent publishers began researching and covering this also, and there are still many of these videos on YouTube, such as this one which has no English translation, but pieces together known information about pedophile Jeffrey Epstein and the rich and famous people associated with him from U.S. corporate media sources.

TGRT Haber, part of the Ihlas Media Group, is the name of the Turkish television station based out of Istanbul, and they claim that they have modeled their programming around the format of American news cable channel Fox News.

They claim a viewership of over 10 million.

TGRT Haber (TGRT News) was established in 2004 by Dr. Enver Oren, Ihlas Holding’s Chairman of the Board. Furthermore, Ihlas Holding’s CEO Ahmet Mucahid Oren, worked on coordinating this project for almost a year.

Its mother station, TGRT’s nightly newscasts were becoming so popular that Ihlas Media Group decided to produce a 24-hour news only spin off channel – TGRT Haber.

TGRT Haber’s motto is “News And Nothing But News”. True to its motto, TGRT Haber offers accurate, objective and timely reports around the clock.

The channel’s responsible editorial policy is one of the main reasons why viewers immediately embraced it as a primary source of information.

TGRT Haber is supported by Ihlas News Agency (IHA), another Ihlas Media Group company. IHA enables TGRT Haber to have live breaking coverage from all of the world’s hotspots.

TGRT News is available live 24 hours a day on both local cable and on the Digiturk platform. Of the approximate 22 million people who watch news each day in Turkey 10 million watch TGRT Haber.

TGRT Haber feels that it is their job to provide news and inform people. This channel is different from many channels in Turkey, because it has stuck to a news only base and has not implemented any tabloid type shows.

It is TGRT Haber’s goal to become the largest news channel in turkey and to grow more each day. While improving, TGRT Haber will not change its objectives and it will remain truthful as always.

I lived in Turkey for several years in the 1980s as a student of the Turkish language, and later as a Turkish translator for American NGO groups sending in medical support teams to the Kurdish refugee camps in northern Iraq from Turkey after the Gulf War in the early 1990s.

And while my Turkish is very rusty today, I believe that this copy is a good English translation of the program that aired at the end of June: