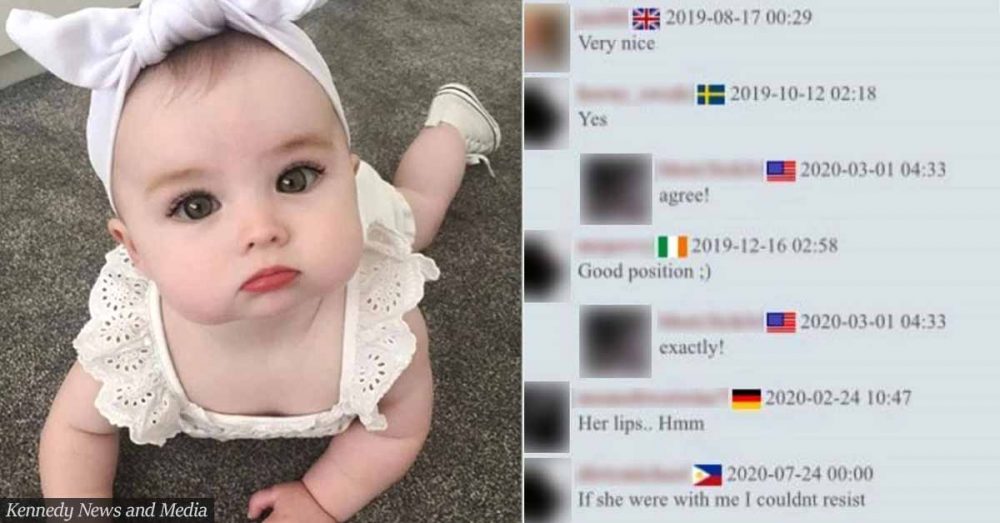 A mother is learning the horrific reality of the internet, every picture you post online can be saved and shared with others and that includes pedophiles sharing photos of your children, Unilad reported.

Amanda Morgan, a 29-year-old mother of a baby girl, recently discovered the dangers of parents sharing pictures of their children publicly on social media.

She is openly warning others after she found pictures of her baby girl Callia on a Russian website which its name has been redacted from this report and handed off to Anons. 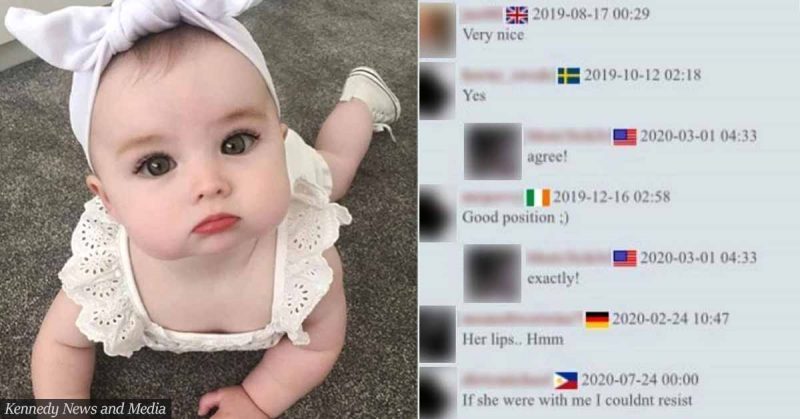 The pictures were first shared in a Facebook and Instagram group, called “cute baby pages.” However, the page lead to a darker website where they are editing toddlers’ pictures and putting them in makeup or sexualizing them.

When parents uncovered the website they worked quick to attempt to get it closed down were quick to alarm Amanda about her daughter’s pictures being taken advantage of in such a horrific way.

Going back to the frightening traumatizing moment when she discovered her baby’s photographs were being exploited for child pornography content, Amanda said:

“I cried uncontrollably for 45 minutes when I received that message. My partner couldn’t calm me down, I was sobbing and shaking. I thought it was all my fault because I had this Instagram page. There are three pictures of my child on that website, I haven’t dolled her up like that, I wouldn’t want to put my baby in make-up.”

Amanda decided to set up an account on the website despite knowing tthe dangers of doing so.

What she discovered was ‘thousands of users with paedophile usernames’. Baby Callia’s pictures had received monstrous comments by users of the Russian website.

“These kids are getting abused and getting pictures taken of them by their own parents. I just feel so sick and I feel sad for those babies. As sickening as the comments were on Callia’s, they were mild. The other stuff that’s on there is even worse. I nearly threw up, I was literally retching like I was going to be sick. I’ve not been sleeping properly since I found out,” Amanda said.

Ever since this horrific disturbing incident, Amanda has been echoing warnings to parents not to share pictures of their children, or to at least make their social media accounts completely private.

“My child is covered, she’s wearing a long-sleeved jumper and a skirt in one of the pictures and you can’t see any of her skin. I would say to parents to make sure they’re covered in any pictures they share, never naked or in the bath. If you want to take those pictures just keep them to yourself, don’t put them anywhere for these creeps to get hold of.”

Did you know? Grooming Tripled On Social Media – Pedophiles Are Hunting Children As Young As 5 On Instagram, Snapchat And Facebook

With social media evolving so are tools to keep yourself safe. A new social media platform SoMee.Social, gives its users full control of their data allowing users to decide what pictures, posts, and very soon videos are shared with friends, the public, and in the future select friends.

The platform also allows users to monetize posts and to sell key points of data to advertisers through its coming Ad Share Market place, without the company doing so behind their backs.

Further, and more importantly relevant to this story the company recently partnered with Cloudflare to use its free Child Sex Abuse Monitoring tool, which its one of the first social media platforms to do so.

All websites using Cloudflare can use its tool to identify Child Abuse imagery and videos being shared on their servers. But SoMee will be working more closely with Cloudflare, while still championing its values of free speech for users.

When using social networks you should always be conscious about everything you share and be aware that what’s on the internet is there forever. Follow the rules, if you wouldn’t want everyone to see it, keep it private.

If you or someone you know has been affected by similar problems and need to speak to someone in confidence regarding the welfare of a child, contact the NSPCC on 0808 800 5000, 8 am–10 pm Monday to Friday, 9 am–6 pm in the UK.