Still NO Scientific Evidence That the Woo-Woo Virus is Real

People who can think and follow a line of reasoning should have a shot at considering the questions: Did researchers actually discover the virus? Did their proof fall short?

DID RESEARCHERS DO ENOUGH TO PROVE THE CORONAVIRUS EXISTS IN THE FIRST PLACE?

If someone says that, during the full moon three weeks ago, the moon suddenly turned gold, and then a strange squadron of giants passed across it, on their way to the ocean, do you think it might be a good idea to find out whether, three weeks ago, there was a full moon? Might that be a basic starting point?

That’s what I’m doing. Checking up to see whether there was a full moon.

A rational researcher, at the CDC, if one actually existed, would say, upon hearing of a possible outbreak in the city of Wuhan: “Let’s see the proof that a new virus is responsible, is the causative agent.”

What kind of proof would he be asking for?

First, he would want to know, “Do researchers there have an actual biological specimen of this new virus? Do they have the real thing?”

And if the answer came back yes, he would reply, “We’re sending in one of our Wuhan people so he can confirm that.”

But how would the confirmation work? You can’t just lay a specimen of a virus on a table and shine a light on it.

There is a traditional method of observation. It’s called an electron microscope photograph (an EM). Certain established procedures exist for obtaining an EM from a patient’s tissue sample. The CDC scientist would want to make sure the Chinese scientists had carried out this process correctly.

Rough sketch: From a patient’s tissue sample, you take a small bit and spin it in a centrifuge. The material settles out in layers.

Knowing which layer (by density) you’re looking for, you remove a bit from that layer, look at it under an electron microscope and photograph it.

If you’ve found a new virus, you should see many identical particles of it in the photo — and, obviously, it should be something you’ve never seen before.

The rational CDC scientist — if one actually existed — would say, “Let’s have a look at the Chinese EM.” He wants to confirm there are many identical particles of the new virus in the EM.

But there is more. And here is where the rubber meets the road and the failure factor is very high. I need to back up a bit to explain.

When a clinical trial of a new drug is done (and here I’ll make a gigantic leap and assume it’s done correctly), is it carried out on one patient?

Is the result of giving the drug to a single patient then extrapolated to mean everyone will react the way this one person did? Of course not. That would be absurd. In clinical trials, sooner or later, researchers are dealing with a large number of volunteers. A thousand or more.

So, in the case of a new coronavirus, in China, the rational CDC scientist would say:

“I want to see electron microscope photographs derived from a thousand patients who have been diagnosed with the new epidemic disease. I want to see those photos side by side. I want to see whether many particles of this same new virus are in all the photos.”

“Oh, we didn’t carry out the EM procedure on a thousand patients. We carried it out on one. Two. Maybe three. I’m not sure.”

At which point, this fantasy rational CDC scientist would blow his stack. He would say, “You’re declaring a new global epidemic based on two or three photographs from two or three patients??”

Consider this potential scenario — which explains why researchers only did the EMs on two or three of the patients.

If someone actually performed the electron microscope work on 1000 patients diagnosed with the new disease, he might find a maybe/possible indication, in the photographs, of a new coronavirus in four patients. AND IN NONE OF THE OTHER 997 PATIENTS.

At which point, in Wuhan, they would shrug and say, “Well, wow, that didn’t work out. What a flop. Our hypothesis of a new disease based on a new coronavirus collapsed.

We should have been able to see lots of the same new virus in the photos from ALL 1000 patients, or at least the overwhelming percentage of them. And we didn’t.

Back to the drawing board. Let’s see.

What’s the primary sign of the new disease? Pneumonia? Come to think of it, about 300,000 people in China die of pneumonia every year.

How about we look at some studies on the air quality here in Wuhan? I think my colleague down the block has a pile of them. Let’s walk over there. Anybody have a searchlight so we can see the street through the fog of deadly pollution? Let me get my oxygen tank and breathing helmet.”

And that would be the end of that.

Back in Atlanta, the fantasy rational CDC scientist would say to his colleagues, “That Chinese outbreak wasn’t a virus. How about we spend the afternoon going through some of our own studies on jjabs? I know the fraud is rampant. Let’s get it out in the open.”

Sure. Happens every day over at the CDC.

Of course, I could be wrong.

Maybe someone has done electron microscope photographs CORRECTLY derived from 1000 patients diagnosed with the new epidemic disease, in ONE LARGE COHERENT HONEST STUDY. LET’S SEE THE PHOTOS. SHOW THEM TO US.

We’ll have a few non-conflicted experts analyze them. Then we’ll demand another complete and honest study of 1000 patients, as confirmation.

Otherwise, don’t talk about science. There is no science going on.

Talk about fakery. And liability. And prison.

SARS-CoV-2: the woo-woo virus which was never isolated – nor has it been proved to exist – so it fails Koch’s postulates. Is this a pandemic or a scamdemic? 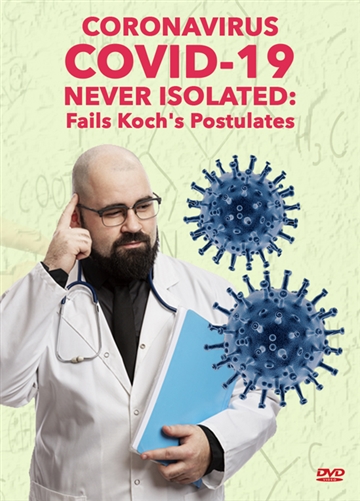 You would think the WHO, the USG and other world governments would have solid evidence for declaring a health emergency. However, the truth is the coronavirus SARS-CoV2 allegedly causing the disease COVID-19 has never been isolated! Nor has it been proved to exist! The standard for determining the existence of an infectious agent is a set of conditions known as Koch’s postulates. The coronavirus doesn’t meet those criteria. There is no evidence to satisfy these basic questions about this outbreak. Is this a pandemic or a scamdemic? Get the DVD here.

I write this piece for those who ordinarily have their heads on straight, when it comes to understanding the basics of HEALTH — but now, because of the “coronavirus epidemic,” are drifting back into the medical model: FIXATION ON GERMS.

A correct reading of suppressed medical history reveals that the hypothesis of “one disease, one germ” is a modern con, moving down a blind alley at midnight. And when you add “one jjab” to the formula, you get an even greater degree of lunacy.

But you also get a trillion-dollar commercial success.

I don’t care how many contemporary molecular biologists are working in labs, amplifying invisible slivers of who knows what molecules into view, and calling them viruses; it’s a con.

They’re all working in the dark, massaging RNA or partial decaying microbes or cellular debris or exosomes or pieces of random genetic sequences or whatever…

The history of human health shows that upgrades in public sanitation, hygiene, and improved nutrition have done more for people than all the laboratory voodoo and “germ-fighting” pharmaceutical interventions ever invented laid end to end.

You want germs? No one knows how many there are. From various estimates, we could be talking about thousands of trillions to the thousandth power. Maybe more.

If an infinitesimal fraction of the critters caused serious disease no-matter-what, we’d not only all be dead, we’d be dead on dead on dead.

To begin to understand how overblown all these modern epidemic duds are, let’s go to the animals. Farm animals. Pigs. A headline blares: A MILLION PIGS SLAUGHTERED.

African Swine Fever Virus was discovered, and in order to stop the contagion, death was rained down on the pigs. On the farm. On the giant factory farm.

So a question arises:

Do you seriously think humans sat down next to each of the million pigs and tested him/her for the Virus? Drew a blood or tissue sample?

Twenty pigs “tested positive” and they killed the rest as matter of course. They always do.

But wait. What are the conditions on this massive million-pig factory farm?

Let’s see. Pigs living in their own urine and feces, crowded next to one another, nose to butt, sprayed with toxic chemicals, eating chemical-laced feed—under high stress, never living the kind of existence they were designed for.

Think they’re going to get sick? Think some kind of minimally reliable test might find a virus or two living and replicating in their bodies?

Do you seriously think those viruses matter, contrasted against the OBVIOUS immunosuppressive ENVIRONMENT?

As the number one germ hunter of all time, Louis Pasteur, was reported to have confessed on his deathbed: it’s not the germ, it’s the terrain — meaning, it’s the body and its strength and vitality and resiliency — THAT should be the central focus of the healing profession. Building up health.

Depopulation Through Famine: Global Lockdowns Set to Plunge 100 Million Into Extreme Poverty Previous post
In Sweden, Where There Was No Lockdown – COVID Cases & Deaths Have Slowed to a Trickle Next post