A new book, Irreversible Damage, reveals how teenage girls are being duped into believing they want to be male, and are pushed into taking puberty blockers, cross-sex hormones, and undergoing double mastectomies.

Whether it is a statement or a question, the title of this book conveys the necessary urgency of this desperately sad story.

Amid the trans debate, seemingly a battle between grown adults, vulnerable children are prey to a malevolent ideology that survivors call a cult. 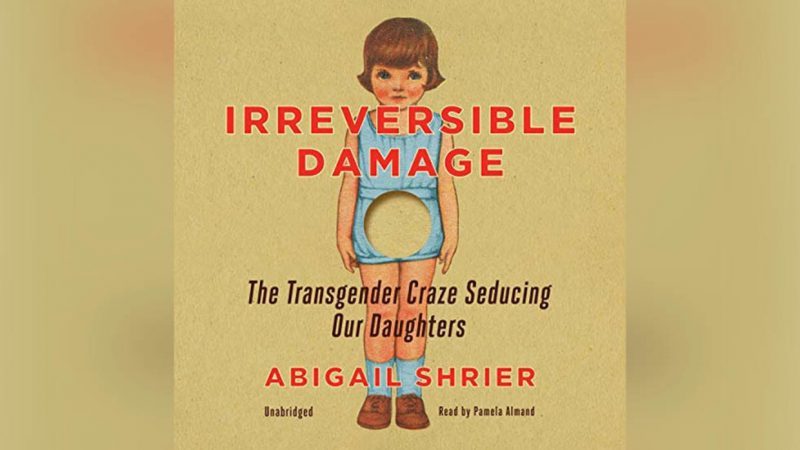 In a superb piece of investigative journalism, Abigail Shrier focusses on teenage girls – most with no history of gender dysphoria – who become captivated by the belief that they are transgender.

Behind the glittery exterior portrayed in the media, she encounters damaged children – many alienated from their families – in poor mental health and facing the prospect of infertility and medication for life.

Shrier, a writer with the Wall Street Journal, pulls no punches when describing phalloplasty, the construction of an artificial penis. The complications can be horrific.

She reports the experience of one nineteen-year-old, “whose phalloplasty resulted in gangrene and loss of the appendage.”

On the cusp of adulthood, that young person has been left without normal genitalia, for either sex, and tethered to a catheter.

I am a transgender person, but I transitioned as an adult when I could understand the implications on my body and my relationship with society.

Besides, by then I’d had my own children. Yet children too young to even give consent for a tattoo are being corralled into making truly life-changing decisions.

Whether you agree or disagree with her, this is a book that needs to be read. Shrier’s informed analysis flows from dozens of interviews, including medical experts and parents.

From Dr Kenneth Zucker, who oversaw the writing of the medical definition of “gender dysphoria,” to ordinary families whose children seem to them to have been swept along by this cult, Shrier talks directly to those with first-hand experience.

The facts are clear: there is a contagion spreading among teenage girls who suddenly believe themselves to be boys.

zWhile there is documented history of young feminine boys expressing a desire to be girls, never before have girls dominated the work of paediatric gender clinics.

The statistics are staggering. In the UK, for example, referrals of teenage girls rose by 4400% in the last decade.

Shrier interviewed Lisa Littman, an American doctor who conducted an observational study and found that nearly 70 percent of the teenagers belonged to a peer group in which at least one friend had also come out as transgender.

In some groups, most of the friends had done so. Transgender identification was encouraged and intensified by friends and social media and, astonishingly, appeared to precede the experience of gender dysphoria itself.

Shrier explores possible reasons why these daughters, often from liberal progressive households, want to be sons.

First, social media where children are influenced by strangers while their parents are kept in the dark.

Second, the educational system where adults who ought to know better have been enthralled, or threatened, by transgender activists.

Ignoring both science and basic safeguarding, they have bought into the notion that we all have an immutable gender identity which may or may not match our sex.

With overwhelming folly, children are being transitioned in their schools with new names and pronouns.

If their parents might be unsupportive, then they are not told, in case their children might feel “unsafe.” But this is something all parents need to know: this phenomenon is catching, and to be forewarned is to be forearmed.

But nothing could have happened without the cooperation of policy makers, and not only within the education system. Therapists – the very people who should be helping children to challenge their thinking – have been blindly affirming whatever their young patients have picked up from the internet.

Anyone who has stood against this has faced censure and condemnation. But as Jungian analyst Lisa Marchiano explained:

“This idea that a kid’s going to come in and tell us that they’re trans and that within a session or two or three or four, that we’re going to say, ‘Yep, you’re trans. Let me write you the letter.’ That’s not therapy.”

Even the medical profession itself has been found wanting. Eminent sexologist Dr Ray Blanchard told Shrier that:

“I can’t think of any branch of medicine outside of cosmetic surgery where the patient makes the diagnosis and prescribes the treatment.”

While the zealots who actually believe that children can change their sex are perhaps in a minority, those professionals who remain silent in education, therapy and medicine are complicit in this unfolding scandal.

Shrier credits the sterling work of parental groups such as 4thWaveNow and Transgender Trend who have stood firm against the ideology.

They have been condemned as bigots and transphobes for protecting children from themselves, the first duty of parents since the dawn of time.

The book is well-referenced and easy to read, making it suitable for a wide readership. The most obvious audience are parents concerned for the wellbeing of their daughters.

But teachers, therapists and doctors, some of whom remain silent out of ignorance or fear, also need to hear these stories.

Those only vaguely aware of transgender ideology may be tempted to think that it cannot be true: young girls taking powerful cancer drugs to halt puberty, or induce an artificial menopause if started. But it is happening across the world, and Shrier catalogues it.

The time has come for society to take responsibility. Much has happened covertly, and the startled onlooker may need time to catch up, but Shrier’s book fills in the background, identifies the problems, explains the impact, and proposes clear and workable ways forward.

This is a must-read for those with children, anyone who works with children and everyone who cares about them.