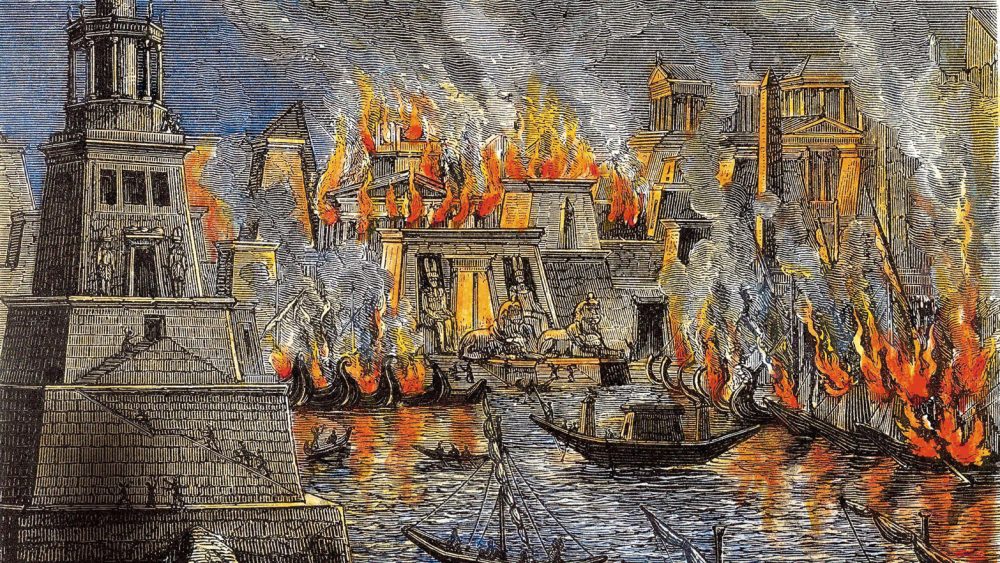 The Truth About Aliens Lost in the Library of Alexandria Fire

When Alexander the Great set about conquering the known world, he created cities in the wake of his conquests. The most well known of these is Alexandria, although he did find something around 17 different cities bearing the name.

There’s one specific Alexandria that’s stood out among its peers, located in Egypt. This Alexandria was host to the Library of Alexandria, a veritable encyclopedia of the entirety of the world’s knowledge at that time.

And then it was burnt. 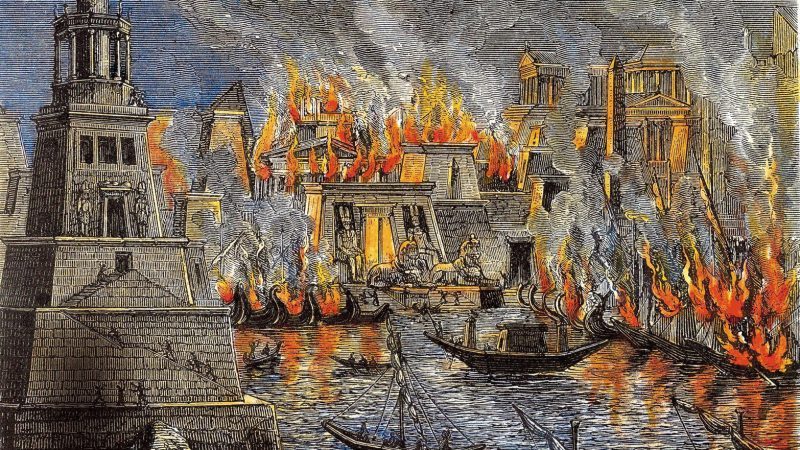 While the Library of Alexandria survived several destructive forces throughout its existence, the most destructive was due to Julius Caesar. As an accidental casualty of war, the Library suffered extensive damage during the Ptolemaic siege in 48 BCE.

The library continued to operate afterward, and while the extent to which it was destroyed is uncertain, there were undoubtedly countless irreplaceable texts lost.

The nature of the Library of Alexandria was meant to compile all of the world’s knowledge.

With every new ship that came into port, their books onboard were confiscated, copied, and then the copies returned to their original owners. Doing so created the world’s greatest resource of knowledge and learning.

This May Have Included Knowledge About Aliens

We have been establishing historical documentation for years. Flying saucers in the sky, blinking lights, and other strange phenomena have been well documented for centuries.

If we’ve been experiencing inexplicable phenomena in our modern day and age, then there’s a chance that the Library of Alexandria contained the truth about aliens.

This truth, of course, can come in a variety of forms. There’s the long-standing belief that the Ancient Egyptians received otherworldly guidance when establishing their civilization.

While we have no concrete surviving evidence of that, the Library of Alexandria may have housed that knowledge.

There’s more than a direct intervention that could theoretically inform us about the existence of aliens.

Eyewitness accounts, records, encounters, all of which could have been stored in the library for future generations to learn from. However, the possibility of this knowledge now surviving is unlikely, due to the library’s burning.

There Are Accounts Still Living

Alexandria, while holding the greatest store of the world’s knowledge, did not hold all its copies. There were too many civilizations at the time to fail to store our history.

Whether or not Alexandria lost a significant portion of what we could perceive as a historical record of alien contact, we still have other sources to pull from.

Plutarch was a Greek historian and biographer who lived between 46 and 120 AD. He later became a Roman citizen, adopting the name Lucius Metrius Plutarchus.

While his duties in his life varied, his most notable works involved the detailing of various Roman Emperors. These Roman figures lived long before his time, but his works are regarded by historians as reliable historical sources.

Most of Plutarch’s works have been lost to time. Those that have survived to this day are in the majority only fragments of his work, and only a few are complete.

However, there’s important information to be derived from the work that we do still have from him.

One of the biographies Plutarch worked on was centered around a man named Lucullus. He was a politician who served both in the government and in the military.

What’s important here is not the man himself, but rather an event that occurred that Plutarch recorded in the biography.

The story goes that Lucullus was leading an army against Mithridates, the king of Pontus.

This had been a long ongoing conflict between the Romans and Mithridates, with Lucullus facing him in the Third Mithridatic War. The event in question took place before a battle with Mithridates, before the conflict began.

The account of the extraterrestrial strikes many similar beat to modern recounts. As Lucullus marched to battle, the sky evidently opened up to welcome the coming object.

It was described as “[appearing] a rapidly descending object resembling a flame, which appeared like a vase in shape and like a glowing annealed metal in colour.” This description is taken directly from Plutarch’s biography of Lucullus.

It needs to be noted that Plutarch lived long after any of these Romans lived.

However, he also lived long after the initial burning of the Library of Alexandria. Plutarch was renowned for his research, including quotations and sources in each of the Lives he wrote.

Essentially, since he learned of this alien event that Lucullus experienced, it’s probable that other documentation of similar events lived as well.

There’s no better source than the man who founded Alexandria himself. Alexander the Great is regarded as one of humanity’s greatest military leaders.

According to historical records, Alexander was recorded to have experienced similar phenomena that could easily be described as extraterrestrial. The modern take on the tale has been established by Frank Edwards, written in 1959.

According to the story, while Alexander the Great was leading a siege on Tyre, he received assistance by “great silver shields” in the sky.

The extent of the UFO’s description ends there, beyond there being three of them flying in a triangle formation. The UFO’s then, allegedly, fired a beam into Tyre’s walls, destroying them and allowing Alexander’s army entrance into the city.

These shields have reappeared in other campaigns that Alexander lead as well. While in combat against the Indian army, these same shields were reported to have appeared above the river they were fighting over.

Their swooping down startled the steeds of both armies, and after Alexander the Great won the battle he decided against pressing on into Indian territory.

While the myth of aliens assisting Alexander in his conquest has gained popularity, the extent of its validity goes no further than Edwards.

He did not cite any sources when writing about the experience, and the histories chronicling Alexander’s exploits have been lost.

While there’s a chance that there are histories detailing alien presences in Alexander the Great’s campaigns, as of now there are no reputable sources to reliably agree on these events occurring.

If Frank Edwards secretly had documents detailing these stories, they were never released. Whether or not the truth behind aliens aiding Alexander the Great would likely have been found in the Library of Alexandria.

While he also lived post-Alexandria burning, any Roman documents are regarded as historically significant due to their extensive practices for reliable documentation.

Livy himself is well-regarded, earning him more than a grain of salt when it comes to his historical recounting.

Livy’s books of History, of which he wrote many, accounted for much of the established Roman history recorded.

However, the passage we’re interested in regards an account of “phantom ships” in the sky. While the record itself appears to be vague, the meteorological event itself is significant.

Could this have been an accounting of visiting extraterrestrials?

There’s no certainty, and experts in UFO research contemplate that this experience was more figurative than literal.

Also read: Why Men With Dark Intentions Destroyed The Library Of Alexandria

However, the description itself seems oddly geared toward a specific physical description, not unlike what we’ve heard in our modern day. It’s even within the realms of similarity with Plutarch’s own description.

Regardless, the excerpt describes an event taking place in 218 B.C., well within the time frame of Alexandria’s existence.

Surviving accounts, kept by successors to historical knowledge, maintain unexplained phenomena linked to what may be extraterrestrial intervention prior to Alexandria’s burning. There’s no telling what other bodies of work written with the same intent may have been lost in the fire.

Crossing the Rubicon: The UK Slips into a Repressive State Previous post
Dr. Deborah Birx Says Americans May Have to Start Wearing Masks Inside Their Own Homes Next post