Twitter says it bans ads from state-affiliated media outlets. However, US government propaganda organs like Voice of America’s VOA Persian pay the social media corporation huge sums of money to spread disinformation against Iran and other foreign adversaries.

Twitter has demonstrated a clear, consistent bias in favor of the US government and its geopolitical interests. The social media giant has also repeatedly lied about its policies on state-backed media outlets. 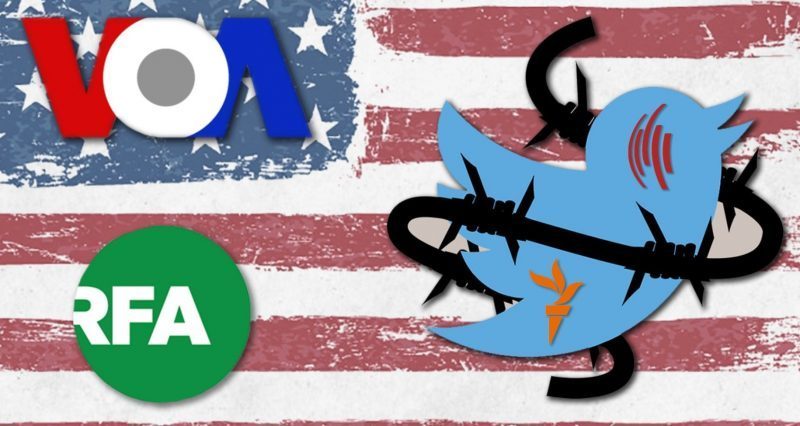 Twitter unveiled a new feature on August 6 that labels government-affiliated media on the platform.

So according to Twitter, China and Russia have "state-affiliated media" but the UK and Canada don't.

As on YouTube and Facebook, this labeling double standard is intentional. Social media giants are doing the bidding of the US state to discredit unapproved "enemy" perspectives. pic.twitter.com/q9dFSdSKEe

Twitter Support claimed it decided to start labeling government-affiliated accounts from the five permanent members of the United Nations Security Council: the US, UK, France, Russia, and China. Oddly, state-funded media outlets from the first three NATO countries have not been labeled.

We chose to start out with the 5 permanent members of the UN Security Council: China, France, Russian Federation, the United Kingdom, and the United States. We don’t plan to make these labels exclusive to these countries and will expand them to more countries in the future.

This is categorically false.

For clarity: we don't let state-affiliated media accounts advertise on Twitter. We’ll also no longer include them or their Tweets in recommendations, as we continue to support a free and independent press.

Twitter hosts a web page called the “Ads Transparency Center,” where it publicly discloses all of the paid advertisements, known as “sponsored tweets,” that the website puts into users’ feeds.

A search in the Ads Transparency Center for the official, verified Twitter account of the US government’s Voice of America, and specifically its Persian-language arm VOA Farsi, shows that the state-affiliated media outlet had paid Twitter to publish dozens of ads just in the first week of August. 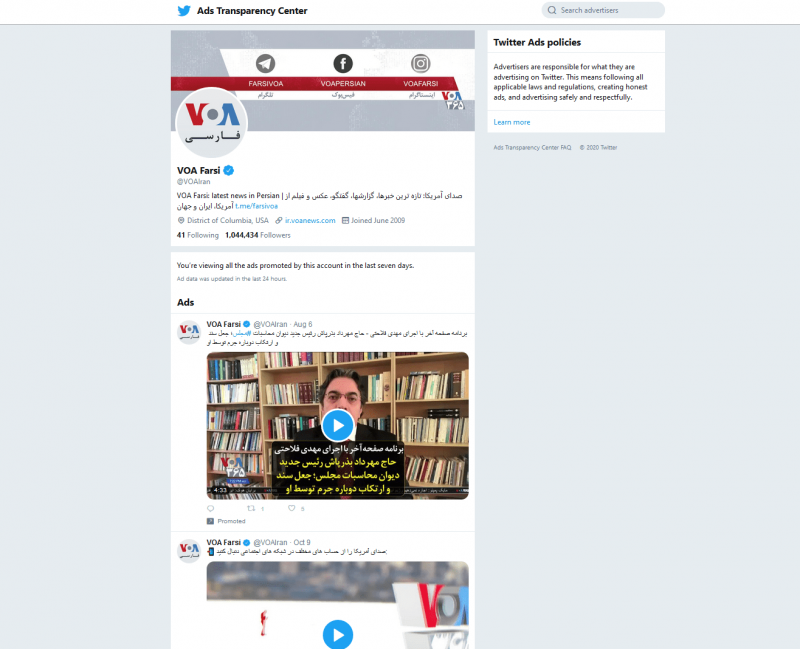 Many of these ads quoted speeches from President Donald Trump and Secretary of State and former CIA Director Mike Pompeo. Others spread fears about coronavirus in Iran, and called for removing the Iranian government. 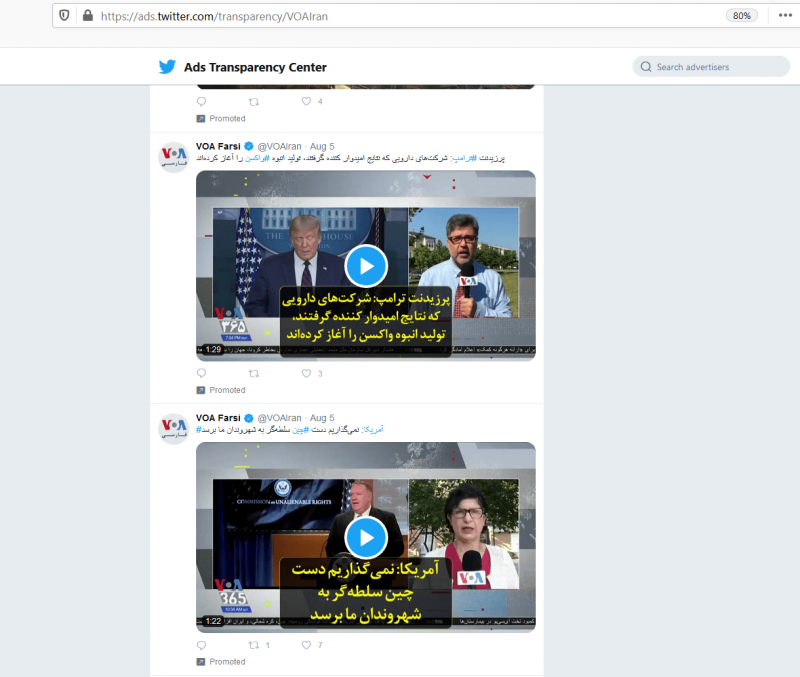 Voice of America (VOA) is a US government propaganda outlet. This is indisputable. Even the History Channel, in an article on the launching of Voice of America in 1947, acknowledged that the “VOA effort was an important part of America’s propaganda campaign against the Soviet Union during the Cold War.”

And of the state propaganda organs funded by the US government, VOA Persian is the most extreme. It is a weapon of information warfare aimed directly at the Iranian government.

The former senior managing editor of VOA Persian described the outlet as “a mouthpiece of Trump — only Trump and nothing but Trump.” The former executive editor added that the US government-funded network just publishes “blatant propaganda,” with “no objectivity or factuality.”

Twitter, however, apparently sees no problem with allowing this Washington propaganda organ to spit out constant disinformation – and the company profits handsomely from its anti-Iran ads.

US Agency for Global Media and CIA’s global propaganda network

Western government-backed information warriors reacted to Twitter’s double standard on the labeling of state-affiliated media outlets with glee, insisting that Voice of America was somehow “independent” of the US government which oversees and bankrolls it.

In reality, Voice of America falls under the jurisdiction of the US Agency for Global Media (USAGM). This is a rebranding of the US government’s Broadcasting Board of Governors (BBG).

USAGM states very clearly on its website that its first goal is to “Be consistent with the broad foreign policy objectives of the United States.” In other words, USAGM is a soft-power arm of the US government, along with all of its constituent platforms, including Voice of America, Radio Free Europe / Radio Liberty, and Radio Free Asia.

USAGM adds that some of its top broadcasting principles are, “Clear and effective presentation of the policies, including editorials, broadcast by the Voice of America, which present the views of the United States Government and responsible discussion and opinion on those policies,” as well as, “The capability to provide a surge capacity to support United States foreign policy objectives during crises abroad.”

Radio Free Europe and Radio Free Asia were created as CIA fronts to spread disinformation targeting the Soviet Union and communist China, in hopes of destabilizing and ultimately overthrowing their governments.

The New York Times acknowledged this in a 1977 report, referring to them as instruments in a “Worldwide Propaganda Network Built by the CIA.”

Journalist Yasha Levine has documented the CIA’s role in setting up these US government propaganda organs, noting that Radio Free Europe / Radio Liberty had originally even been named Radio Liberation from Bolshevism.

The Grayzone has extensively documented Twitter’s censorship of accounts in countries Washington has targeted for regime change.

Thousands of people, including journalists, activists, and civilians who are unaffiliated with their governments, in Venezuela, Iran, Syria, Russia, China, and beyond have had their profiles suspended or restricted by the social media giant.

This is part of a larger context of Big Tech corporations silencing voices, and even entire media outlets, that are critical of US foreign policy, under pressure by the US government.

When Twitter first announced, in August 2019, that it would ban advertising from state-affiliated media outlets, The Grayzone noted that the social media corporation was working with hawkish organizations funded by the US government and its European allies.

Among the so-called NGOs that Twitter chose to rely on to define “state-controlled media” was ironically Freedom House, a right-wing lobby group that is itself bankrolled by US government grants, and which produces reports whitewashing Washington-backed dictatorships while demonizing foreign adversaries.

This senior Twitter executive, Gordon MacMillan, serves in the British army’s 77th Brigade, which uses social media networks and the internet to wage what its officials openly call “information warfare.”

By allowing US government propaganda organs to publish constant paid ads while hiring British psy-ops soldiers, Twitter has been effectively transformed into an arm of Western state media – but without the warning label.