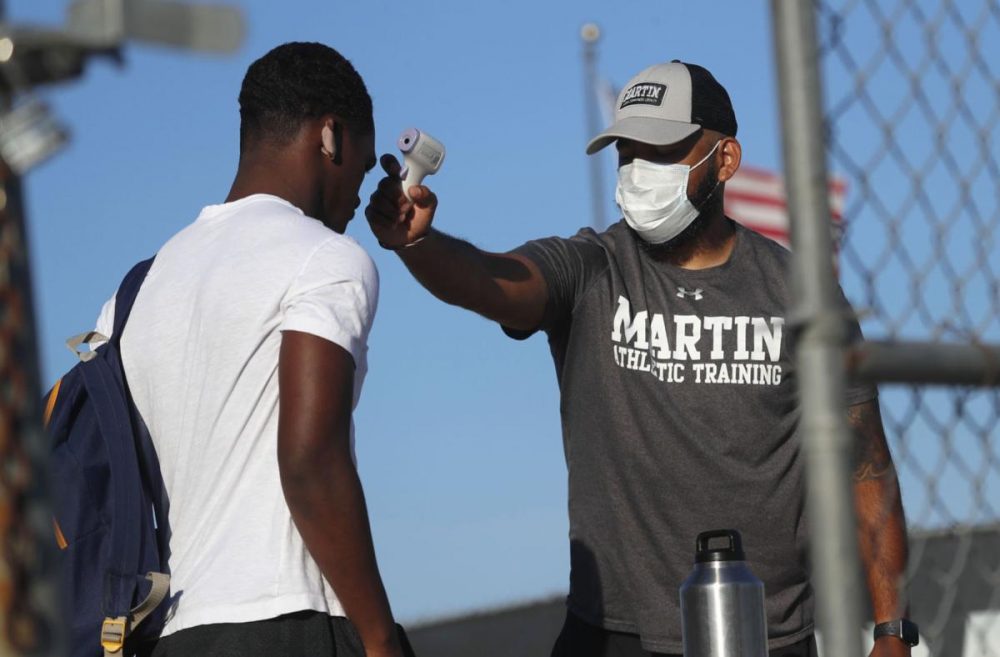 The National Football League (NFL) recently stated that there were 77 positive tests for COVID-19. This caused a lot of noise in the mainstream media, but it was shortly revealed that all of these tests were actually false positives.

Jon R. Cohen, M.D., the Executive Chairman of BioReference Laboratories, the testing partner of the NFL, released a statement explaining that these false-positives were due to an isolated contamination in the New Jersey lab. 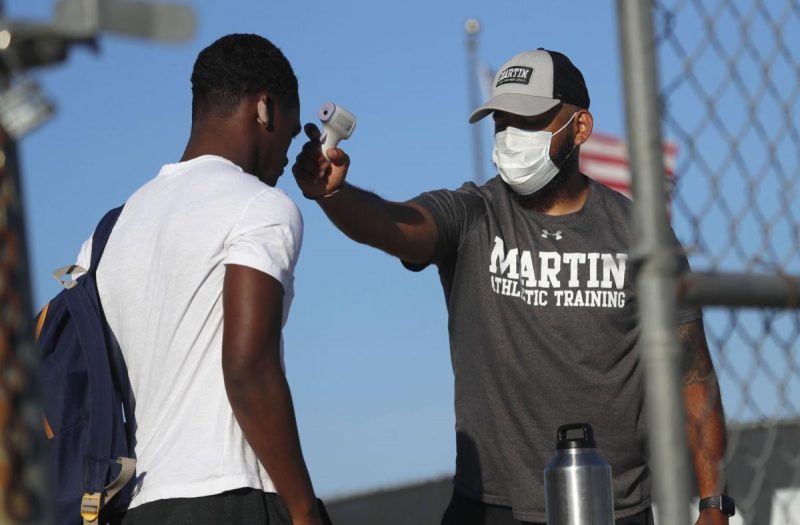 “The NFL immediately took necessary actions to ensure the safety of the players and personnel. Our investigation indicated that these were most likely false positive results, caused by an isolated contamination during test preparation in the New Jersey laboratory.

“Reagents, analyzers and staff were all ruled out as possible causes and subsequent testing has indicated that the issue has been resolved. All individuals impacted have been confirmed negative and informed.”

We normally wouldn’t cover a story like this, but I believe it’s important to highlight the testing used to identify the virus and the discrepancy that lies behind it.

For example, a study published in Clinical Microbiology Reviews in 2006 highlights:

Although the clinical manifestations of respiratory tract disease are easily recognized, the etiological agent responsible for disease is often not identified. For community-acquired pneumonia, a microbiological diagnosis can be made in <50% of cases (83, 102, 140).

In the pediatric population, respiratory syncytial virus (RSV), parainfluenza viruses, and influenza virus are known as the major causes of bronchiolitis and lower respiratory tract infections (LRTI). However, in a third of these cases of LRTI in children, an infectious agent cannot be identified (27, 135).

In nearly half of upper respiratory illnesses (URI) in children, an infectious cause cannot be determined (86). The etiology of a majority of LRTI is thought to be viral (39), yet in only 40% of cases can a viral agent be identified, even with use of state-of-the-art genomic amplification methods (70).

This means that it’s very hard to identify a virus, and it’s not as simple as it’s being made out to be. Testing positive for the virus doesn’t always mean you have the virus, instead it could mean that you may have the virus, but it’s unclear. When it comes to covid, it’s not an unorthodox question whether or not a large majority of “positive” tests we are seeing in some countries really don’t reflect an accurate number of how many people actually have covid.

On the flip side, it seems generally accepted in the scientific community that many more people have been infected than what the numbers show, similar to other respiratory viruses, which in turn drives the infection fatality way down, somewhere on par with the seasonal flu. You can read more about that here.

That being said, again, it doesn’t seem like this virus is easily identified according to some information. For example, The Bulgarian Pathology Association has taken the stance that the testing used to identify the new coronavirus in patients is “scientifically meaningless.”

This comes after the president of the Bulgarian Pathology Association, Dr. Stoian Alexov, said that European pathologists haven’t identified any antibodies that are specific for SARS-CoV-2.

He criticized the World Health Organization (WHO) and called them “a criminal medical organization” for creating fear and hysteria without, according to him, providing any verifiable scientific proof of a pandemic. He made these statements sharing his observations in a video interview summarizing the consensus of participants in a webinar on COVID-19 on May 8, 2020, with the European Society of Pathology.

It was conducted by Dr. Stoycho Katsarov, chair of the Center for Protection of Citizens’ Rights in Sofia and a former Bulgarian deputy minister of health. The video is on the BPA’s website, which also highlights some of Dr. Alexov’s key points.

This may seem confusing as it goes against information that’s been published. For example, the National Institutes of Health (NIH) claims that “Potent antibodies found in people recovered from COVID-19.” (source)

So it’s understandable how many people would not agree with the stance of the association, and claim that it is indeed false, and that’s an understandable perception, but should we dismiss the reasoning? They are experts in their field.

Furthermore, films like Plandemic, which you can watch here, show how many years ago the virus was actually patented, or at least another type of coronavirus.. Does this mean that it can be identified outside of the human body, but not as well within the human body?

I don’t know, which is why I am confused with regards to many things that have surfaced about the new coronavirus during the pandemic. The idea that we can’t identify the virus contradicts with a lot of information, and vice versa. Things are not clear, and that’s what happens when we live in a world that lacks transparency, one in which science and become extremely politicized and used to push various agendas.

The Bulgarian Pathology Association cite an article published in “Off Guardian” that makes some very interesting points. Below is a tidbit from what the article has in it, you really have to actually read the article to get a full understanding.

It’s extremely well-sourced, full of detail and uses not only a number of scientific publications to back up their claims, but also statements from a number of scientists in the field. Again, I recommend you read the entire article here to get the full scope of their reasoning.

In it, they state:

So to start, it is very remarkable that Kary Mullis himself, the inventor of the Polymerase Chain Reaction (PCR) technology, did not think alike. His invention got him the Nobel prize in chemistry in 1993.

Unfortunately, Mullis passed away last year at the age of 74, but there is no doubt that the biochemist regarded the PCR as inappropriate to detect a viral infection.

The reason is that the intended use of the PCR was, and still is, to apply it as a manufacturing technique, being able to replicate DNA sequences millions and billions of times, and not as a diagnostic tool to detect viruses.

How declaring virus pandemics based on PCR tests can end in disaster was described by Gina Kolata in her 2007 New York Times article Faith in Quick Test Leads to Epidemic That Wasn’t.

They go deep into the science as to why they believe what they do.

We also contacted Dr Charles Calisher, who is a seasoned virologist. In 2001, Science published an “impassioned plea…to the younger generation” from several veteran virologists, among them Calisher, saying that:

[modern virus detection methods like] sleek polymerase chain reaction […] tell little or nothing about how a virus multiplies, which animals carry it, [or] how it makes people sick. [It is] like trying to say whether somebody has bad breath by looking at his fingerprint.”

And that’s why we asked Dr Calisher whether he knows one single paper in which SARS-CoV-2 has been isolated and finally really purified. His answer:

I know of no such a publication. I have kept an eye out for one.”[4]

This actually means that one cannot conclude that the RNA gene sequences, which the scientists took from the tissue samples prepared in the mentioned in vitro trials and for which the PCR tests are finally being “calibrated,” belong to a specific virus — in this case SARS-CoV-2

I also recall coming across a study that purported more than half of those who tested positive for the virus and were asymptomatic may be false positives. That study has since been retracted but you can access it here.

How Dangerous Is The Virus? I don’t know.

The death rate for COVID-19, according to many experts, is right on par with the seasonal flu. This is a narrative that has become quite clear as we’ve progressed through this pandemic, and there are many examples.

John P. A. Ioannidis, a professor of medicine and epidemiology at Stanford University has said that the infection fatality rate is close to 0 percent for people under the age of 45 years old, explaining how that number rises significantly for people who are older, as with most other respiratory viruses. You can read more about that and access that here.

Furthermore, the fact that deaths in many countries have been counted as covid deaths when covid was not really the clear cause of the death, also has more people questioning what is happening here. You can read more about that story and see specific examples here.

These numbers really show how much the original models supported by the World Health Organization (WHO) were completely off, and in reality did nothing but contribute to unnecessary fear, panic and hysteria.

These original models were the justification for worldwide global lockdown, and now that the fatality rate has dramatically declined and has remained low, mainstream media is focusing on cases.

The question is, again, can we trust the testing? I don’t know, but I do know there is a lot of discrepancy when it comes to testing for these types of respiratory viruses.

It can be difficult to really understand what’s going on. On top of that, we now have a digital “fact-checker” that is making its way around the internet that is censoring information and perspectives that contradict the ones given to us from the World Health Organization (WHO).

Should we not be able to examine information for ourselves and determine what’s really going on? Is this pandemic being used, similar to other global catastrophes, to impose more control measures on the human population, like Edward Snowden and many others have alluded to?

Are you staying calm, and peaceful when trying to have a discourse with someone who offers an alternative perspective? Why are things in our world so unclear?

Why do we continue to rely on big interests to tell us what’s happening, why do we hand over our consciousness to them instead of doing our own research?

Why are so many people divided in separated when it comes to their beliefs with regards to what is happening with the new coronavirus?

Why do some issues on our planet, like elite-level child trafficking get absolutely no media attention when other topics do? Why are we being discouraged from asking questions that don’t fit the frame?

Why are films like plandemic being banned everywhere, and heavily criticized and deemed a conspiracy theory by the mainstream media without them every addressing the actual points made in the film? Why are organizations like ours being censored and demonetized so much?

Australian Study: Bee Venom Kills Breast Cancer Cells Previous post
Nancy Pelosi Busted Sneaking in to a Beauty Salon That’s Supposed to be Closed Over COVID and Without Wearing a Mask Next post