Whether in Colonial Madagascar or in America, Public Schools Have Evolved in Remarkably Similar Ways – How is This Possible?

All around the world, students attend schools which have an astonishing degree of similarity.

• Children are required to attend.
• It runs from kindergarten to grade 12.
• Students are divided by age, not by what they need or want to learn, nor by what they’ve already learned.
• The teacher is the authority. The children provide heads which the teacher is supposed to fill.
• There is little or no opportunity for students to explore a subject in depth, to develop a passion, to hone a skill.
• There’s an hour for one subject, then an hour for another.
• Teachers are considered qualified if, and only if, they have the required certificate.
• Whether they can teach well is irrelevant.
• Whether they love or hate children is irrelevant.
• Whether childhood is a happy time for anybody, is irrelevant. That’s not on the spreadsheet.
• Curriculum is fixed, and taught at a fixed rate, even if that doesn’t work for some students… even if it doesn’t work for anybody at all.
• It centers around a standardized curriculum and lesson plans, not real-life experiences.
• Students and teachers alike believe that the main purpose of school is preparing students to pass the exam.

Whether in colonial Madagascar of 1908 (above) or 1920s America (below), public schools have evolved in remarkably similar ways.

If you were starting from scratch, and wanted to help children become contributing, well-rounded members of society, would you have invented this plan? Surely not. Nobody else did. Well, almost nobody else.

For many centuries, the favorite pastime of European rulers was invading one another to win more territory.

King Frederick William III of Prussia encountered a problem: Most of his troops were farmers who had been drafted to serve him. When the enemy shot at them, they had an annoying tendency to go home to their family and farm. He wouldn’t win more land with that army! He wanted soldiers who, if ordered to make a suicidal charge, would blindly obey — not soldiers who might shoot their captain and go home.

To create them, Prussia instituted a system of schools that focused on making students respect and obey the authority figure — a teacher. (1)

When young men arrived for their first day in uniform, they already knew how to stand in a straight line. Prussia became a military powerhouse. It expanded its territory, and today we call it Germany.

But the king couldn’t tell parents, “Send us your children so we can teach them to be cannon fodder.” Schools also taught reading and arithmetic. History does not tell us if the primary goal was to mold obedient soldiers or obedient citizens. Prussia got both. Students did not, however, learn to think independently. The teacher had the answer; the students’ job was to memorize it.

This, alone, would have been enough to persuade other rulers to adopt what became known as the Prussian System. Soon another incentive appeared: The Industrial Revolution.

Previously, most Europeans lived in the countryside and worked for themselves — typically as farmers, shopkeepers, blacksmiths, or carpenters.

The invention of the steam engine changed all that. Within a few decades, urban factories sprang up. Farmers — sometimes seeking a better life, other times forced off their land — moved to the city. But they weren’t reliable factory workers.

Owners needed workers who would show up on time, follow orders, and accept boredom as their fate in life. Prussian-style schools churned them out.

More support came from a different direction. Horace Mann, an American reformer, thought the Prussian school system could improve the lives of poor people in the United States. He got Massachusetts to adopt it and other states soon followed.

European nations introduced the Prussian system in their colonies. It created the docile, low-level workforce that they needed, while appearing to benefit the local population.

In most countries today, school enrollment has increased but the Prussian system still predominates.

Today, further support for this Prussian system comes from a new source: The education industry. A vast network — administrators, teachers, and government officials; textbook and curriculum publishers; teacher training colleges; aid workers in developing countries; and the inevitable consultants — all derive their income from the public school system that has evolved.

Many of them genuinely care about children and education. But they also care about their income and job security. That shapes their thinking, and limits their enthusiasm for deep change.

And so here we are today, with a model of schooling intended to mold soldiers who wouldn’t run away when the enemy started shooting, and which evolved to meet the needs of factory owners, but also to make everyone feel good about sending their children into it. The origins of this system are still in evidence. 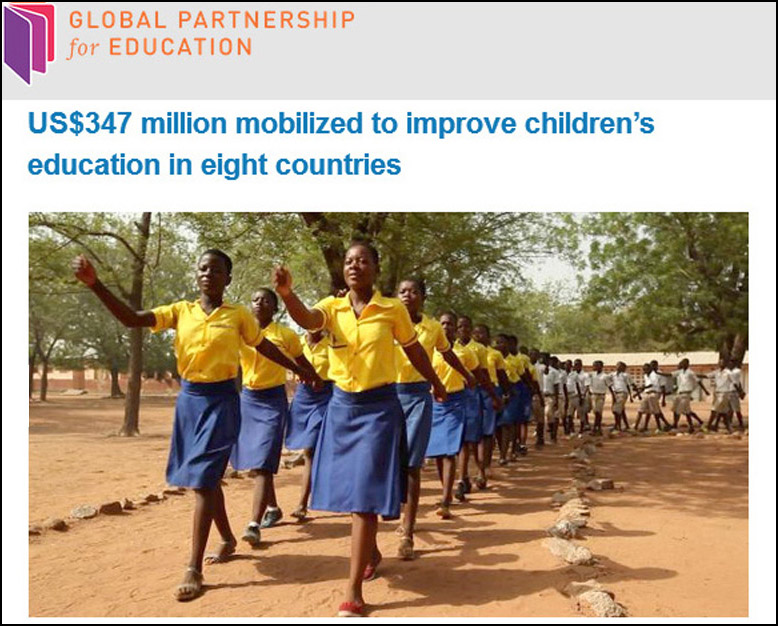 This year the Global Partnership for Education, a Western NGO that has spent $6 billion to influence school policies in developing regions, proudly announced its latest grants with this photo of schoolgirls marching in lockstep. (The boys, in back, aren’t so enthusiastic about the lockstep thing.) (2)

A never-ending stream of critics, in the global South and North alike, see plainly that the system doesn’t work, and think this is so obvious, it shouldn’t be hard to improve it.

But the system does work — for many people. Not only those in the education industry, but also for the global elite. And so, it continues to thrive. Even if children do not.

What can YOU do?

My goal here has been to give a brief history of the school model that has spread to much of the world. There were schools long before this, but the earliest schools focused on learning. This system does not.

If this is what you’ve got, and you want to change it, I can’t tell you what to do. Too many people are already trying to run it from afar! But I’ll suggest a starting point:

Set a goal to talk with five people in the next three days — family, friends, other parents, government officials — about this. Ask what they think. Discuss your ideas.

If you do this, I’d love to hear what comes of it, either as a comment (below) or a reply to the Tweet on 17 Sept. 2020 (at @k_colonialism) that has brought many people to this page.

And of course, we welcome links to this page on social media or your website. If you found this informative, your friends and followers are likely to, as well.

1. My source for this was Matt Ridley’s book The Evolution of Everything, chapter 10. He relies on one source, and some readers have challenged this specific link to Frederick William III.

I do not have access to a large library and I’ve not been able to find independent confirmation. For those interested in further discussion of this point, or who can contribute more, I’ve created a new page: The Prussian System of Schooling: A Forum for Discussion.

2. Girls Marching in Lockstep is from the Global Partnership for Education website, 28 Feb. 2020. (The layout has changed since then but the picture is still posted.)

The Federal Reserve is a PRIVATELY OWNED Corporation Previous post
Are the Rothschilds Truly Leaving Gold? Next post