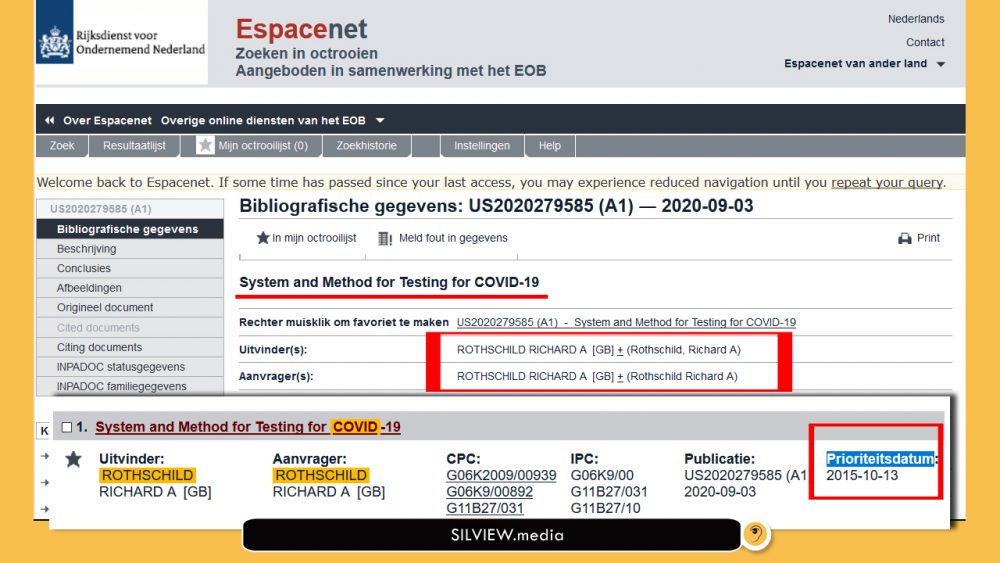 Atomic Bombshell: We Have Proof That Rothschilds Patented Covid-19 Biometric Tests in 2015

It’s not disputable, since the information comes from official patent registries in the Netherlands and US. And we have all the documentation.

As we’ve shown in previous exposes, the whole Covidiocracy is a masquerade and a simulation long prepared by The World Bank / IMF / The Rothschilds / World Economic Forum (basically the world’s “elite”, the 0.1%) and their lemmings, with Rockefeller partnership.

In 2015 a ‘System and Method for Testing for COVID-19′ was patented by Richard Rothschild, with a Dutch government organisation.

Did you catch that? In 2015 – four years before the disease even existed – a testing method for COVID-19 was developed. (2B) 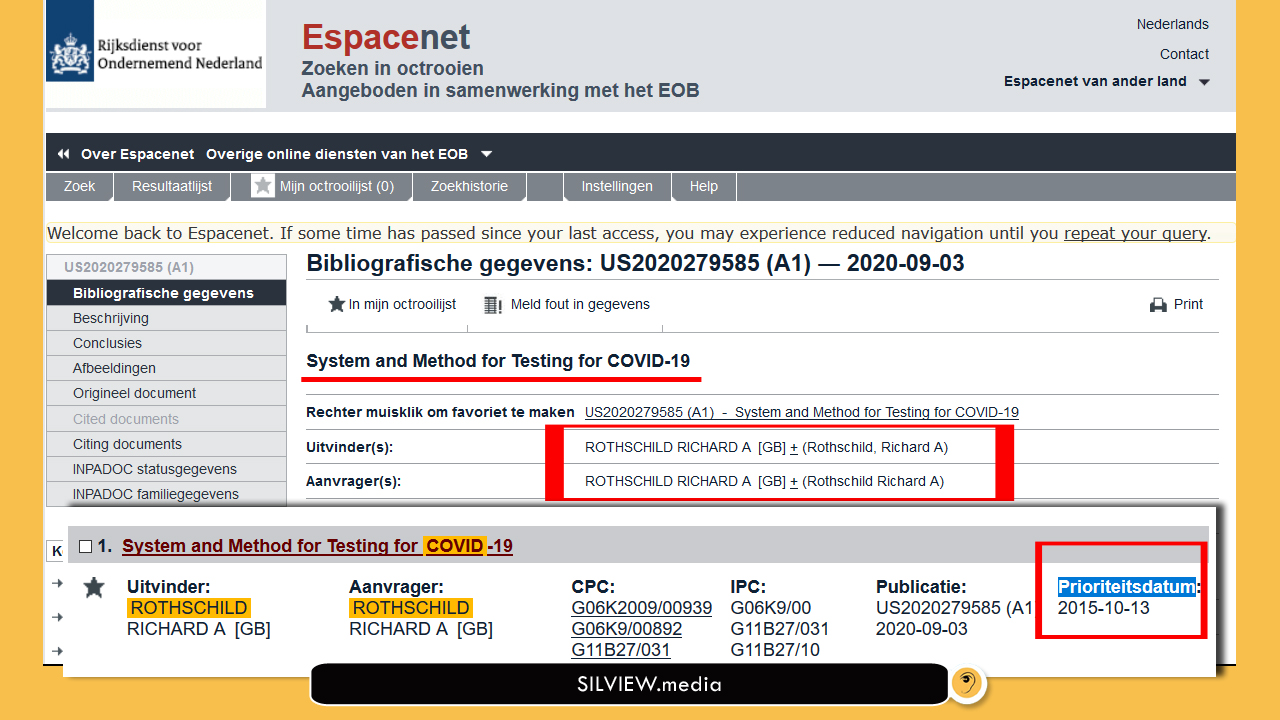 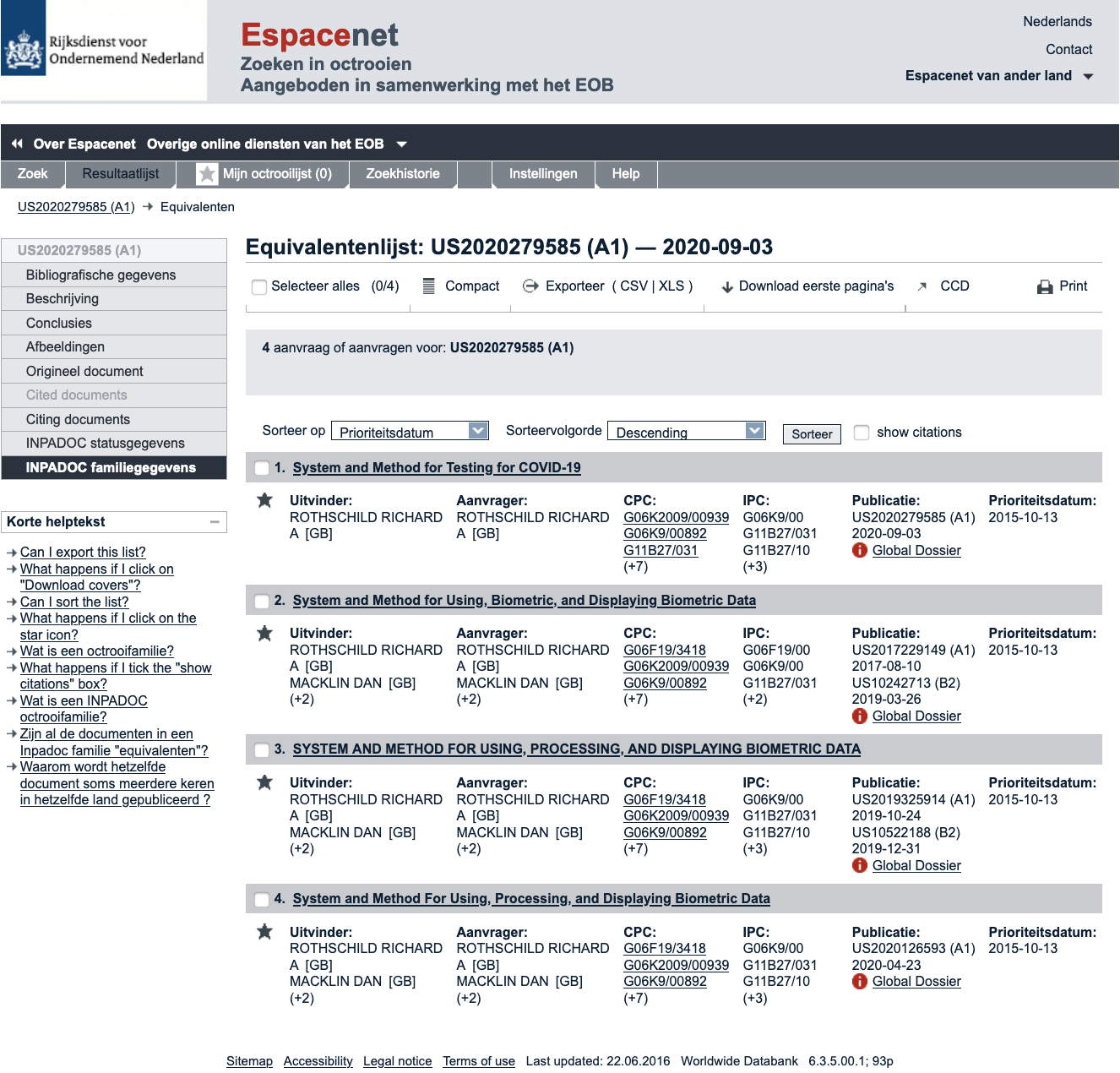 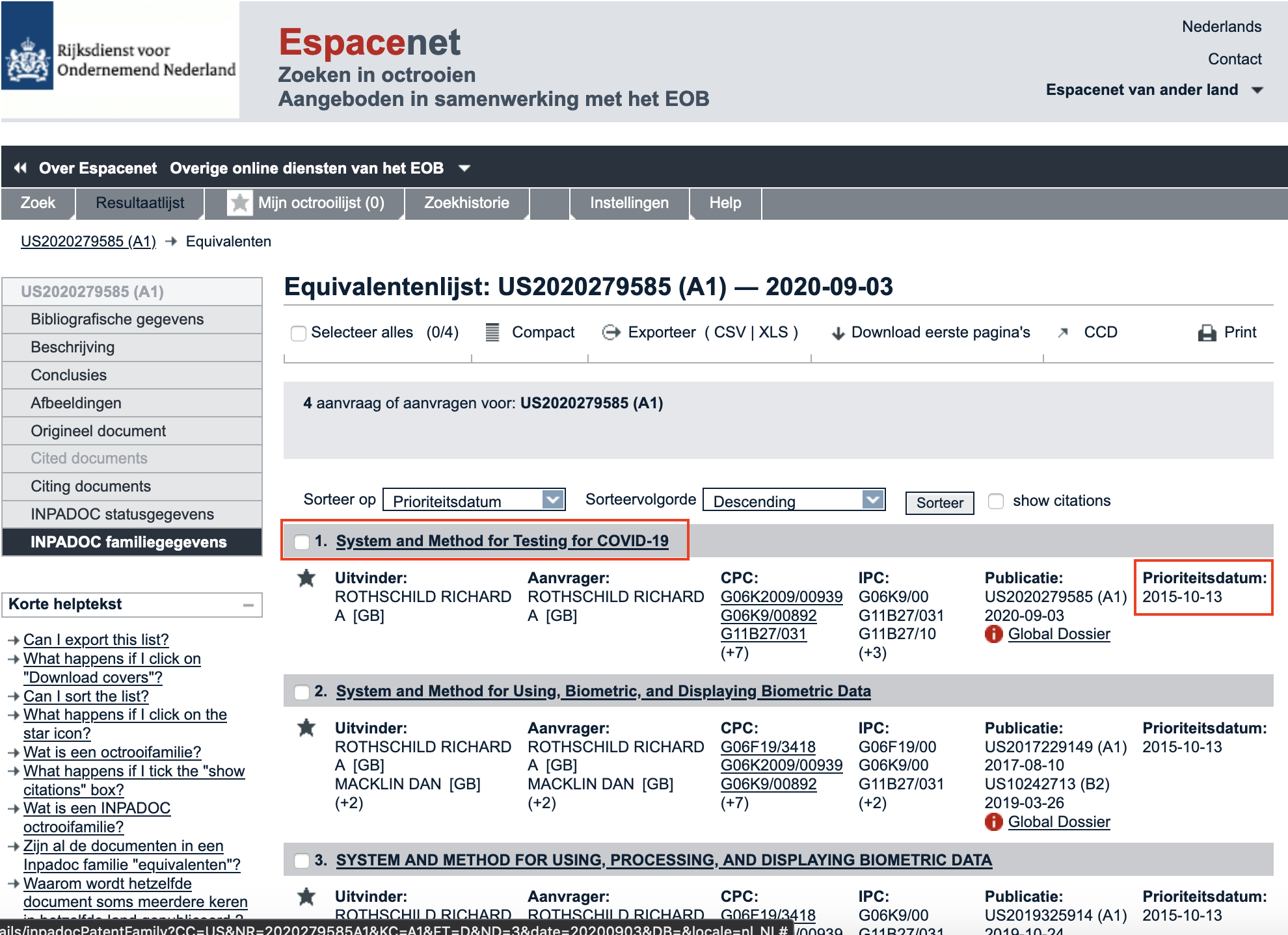 A method is provided for acquiring and transmitting biometric data (e.g., vital signs) of a user, where the data is analyzed to determine whether the user is suffering from a viral infection, such as COVID-19.

The method includes using a pulse oximeter to acquire at least pulse and blood oxygen saturation percentage, which is transmitted wirelessly to a smartphone.

Once accurate data is acquired, it is uploaded to the cloud (or host), where the data is used (alone or together with other vital signs) to determine whether the user is suffering from (or likely to suffer from) a viral infection, such as COVID-19.

Depending on the specific requirements, the data, changes thereto, and/or the determination can be used to alert medical staff and take corresponding actions. 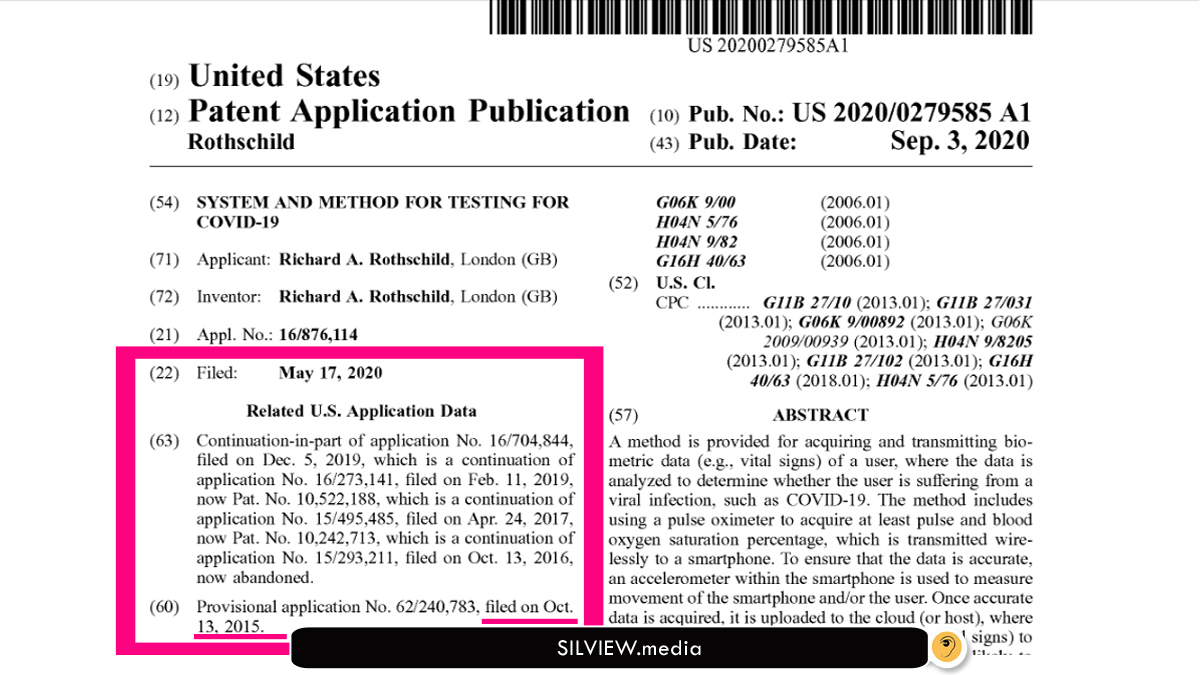 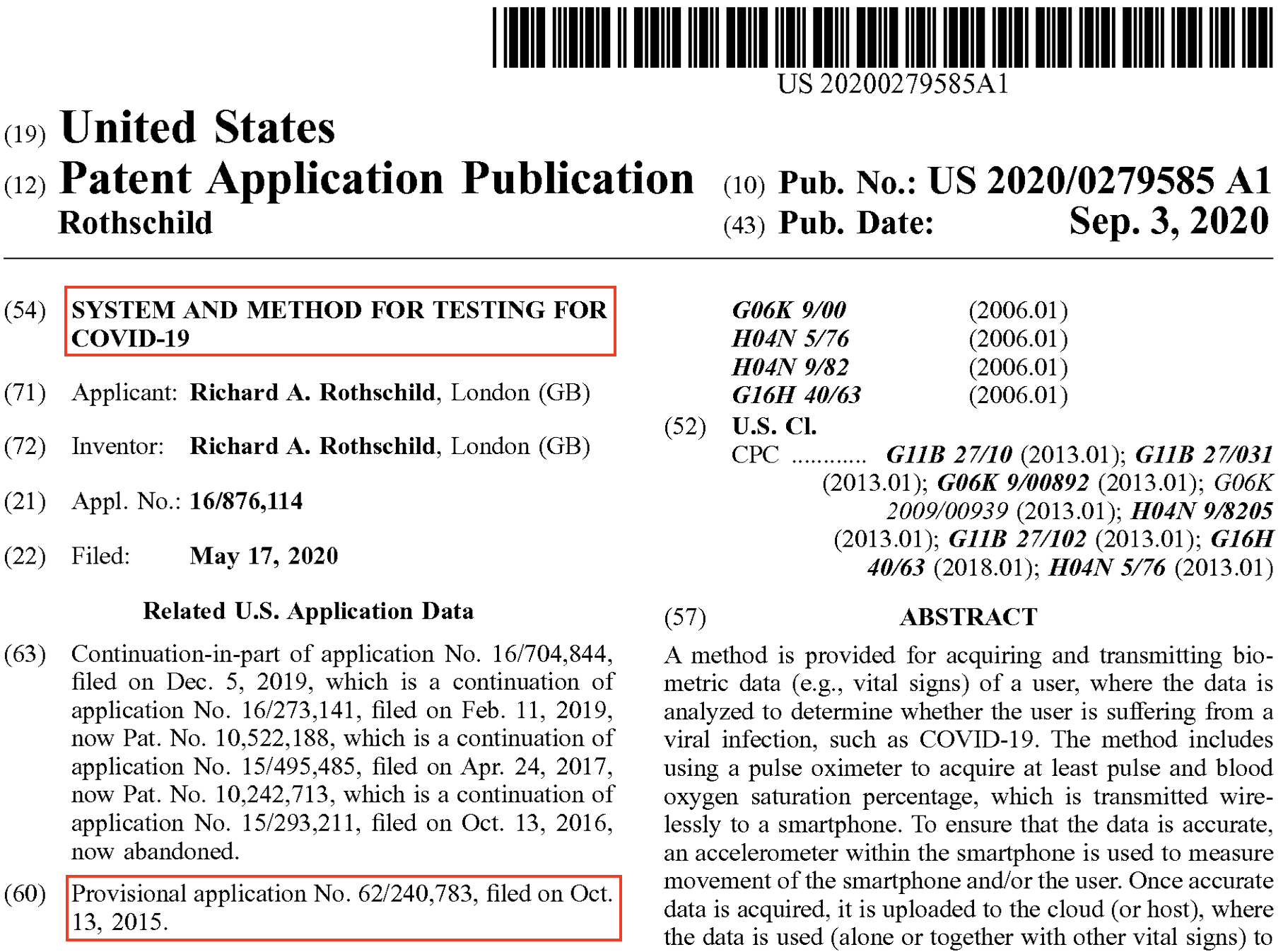 ONE KEY DETAIL STRUCK ME ON THESE REGISTRATIONS: Both were filed and updated years ago, but they were SCHEDULED to be made public in September 2020. This is sufficient evidence that they knew in 2015 what’s going to happen in September 2020!

Data from the World Integrated Trade Solution, however, shows something astonishing:

Two years before the outbreak of COVID-19 the USA, the EU, China and nations around the world started exporting millions of diagnostic test instruments for… COVID-19, a disease that supposedly didn’t even exist back then.

None of the above makes sense, unless this is not actually a pandemic, but a PLANdemic. And I think the following article proves just that: Ultimate Proof: Covid-19 Was Planned to Usher in the New World Order.

Cop Admits to Sexual Abusing 2 Teen Girls – Instead of 30 Years, He Got Just 60 Days in Jail Previous post
CDC Study: Overwhelming Majority of People Getting Coronavirus Wore Masks Next post