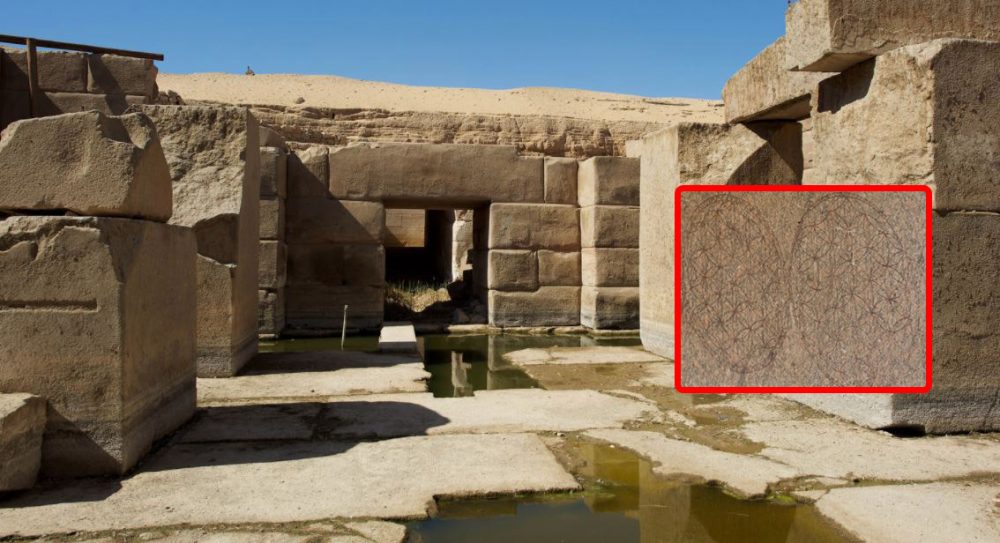 The Osirion Temple and the Flower of Life: An Archaeological Nightmare

Located in Abydos, modern-day Egypt we find a number of incredible structures. Among them is the so-called Osirion or Osireon an ancient Egyptian temple located to the rear of the temple of Seti I.

It is located in the extension of the longitudinal axis of the temple of Seti I and was made with limestone, reddish sandstone, and granite.

The temple was discovered in 1902 by Flinders Petrie and Margaret Murray who were excavating the Temple of Seti I. 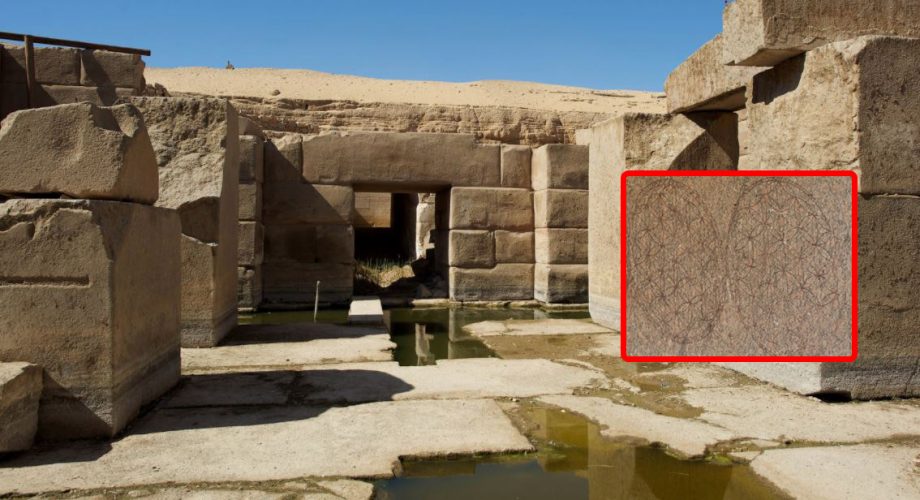 The entire site was uncovered in 1926. Mainstream archaeologists place the temple to the reign of Set I.

Its structure consists of a vaulted corridor, which, starting from the temple of Seti I, reaches the antechamber, a short passage that connects with the great central chamber, and the last chamber, parallel to the antechamber.

The building typology, its elements and the materials used (granite) are similar to the temple of the valley of the pyramid of Khafre, in Giza, so some scholars have suggested that it may be a copy or a previous building that was reused. 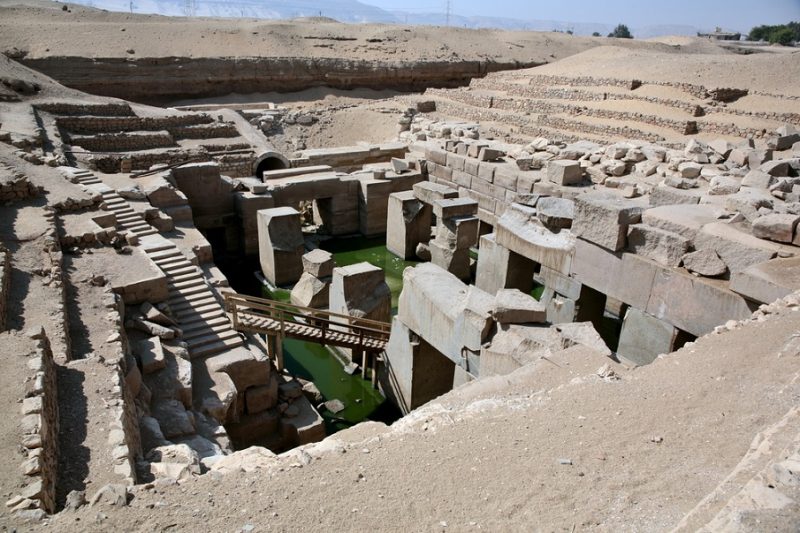 The Osirion is fascinating for a number of reasons.

It’s extremely difficult to access the interior, due to flooding caused by the rise of the phreatic level of the underground water layer.

The Osirion, unlike any other temples at Abydos, was constructed at a lower depth than structures nearby. It also features a completely different architectural approach.

The fact that is frequently flooded means that it would have made its construction impossible had the water have been the same at the time it was erected.

This raises a number of problems. 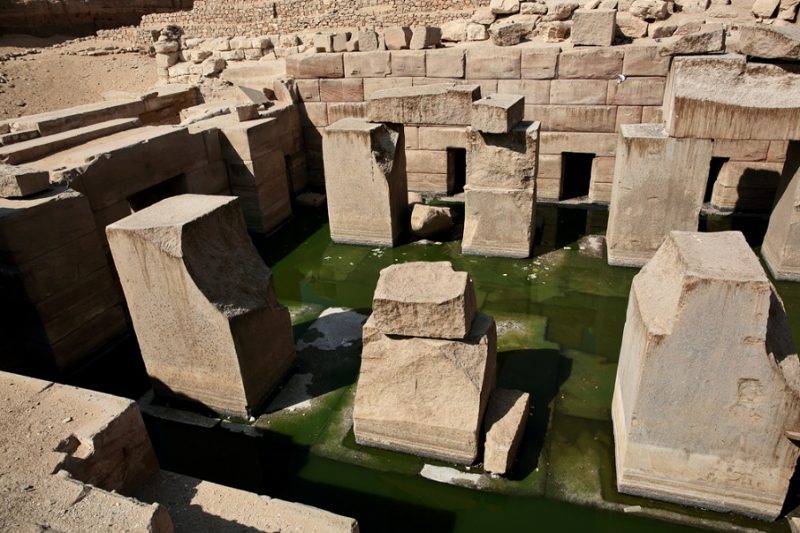 Furthermore, according to Strabo — a Greek geographer, philosopher, and historian — who traveled to the Osirion in the first century BC said that it was built by Ismandes, or Mandes (Amenemhet III), the same builder as the Labyrinth at Hawara.

“Above this city [Ptolemaïs] lies Abydus, where is the Memnonium, a royal building, which is a remarkable structure built of solid stone, and of the same workmanship as that which I ascribed to the Labyrinth, though not multiplex; and also, a fountain which lies at a great depth, so that one descends to it down vaulted galleries made of monoliths of surprising size and workmanship.”

Many believe that this temple was not the work of the Egyptians., but rather an ancient site they found and built their temples around it and continued worshiping it for millennia.

There are theories that suggest that when the temple was built, it was not located beneath the soil and that during thousands of years that would follow, sediments started piling up eventually covering the temple entirely.

This theory would suggest the Osirion as not built by the ancient Egyptians as mainstream scholars put forth, but by a civilization that predates them.

More curious details are revealed if we decide to compare the architecture of that period, and the Temple of Seti I, you see the difference clearly.

It’s as if the Osirion is a temple out of place and time.

This is why perhaps the biggest reason that goes against the conventional dating of this structure is the architectural context.

The new architecture of the ancient Egyptians is incredibly different in its style and form, and although each temple of the new kingdom is unique, there is a multiplicity of stylistic coherence between their designs.

Curiously, the Osirion does not exhibit any of these traits.

Furthermore, there is an absence of inscriptions on the site, and it seems that the construction with megaliths is unique to the architecture of the new kingdom, not to mention that tt seems almost absurd that Seti built his temple on one level, and the Osirion a few meters deeper into the ground.

The Flower of Life at the Osirion

Another fascinating feature we found at the Osirion is the Flower of Life. 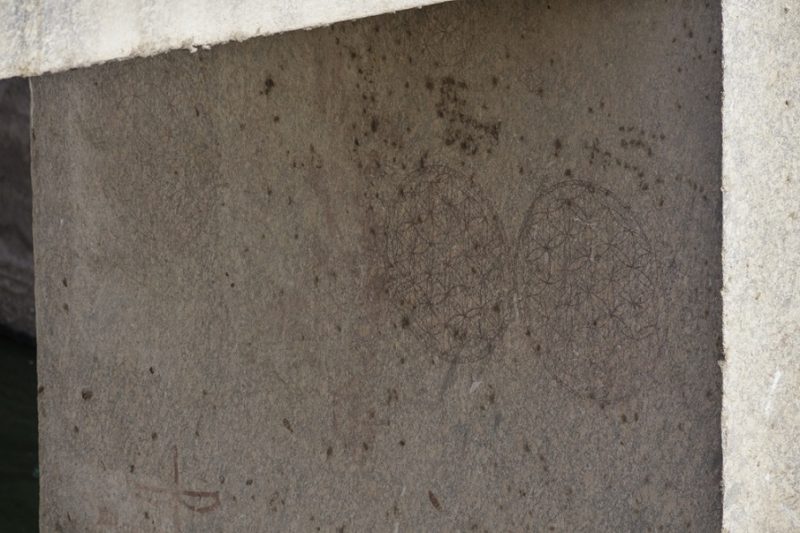 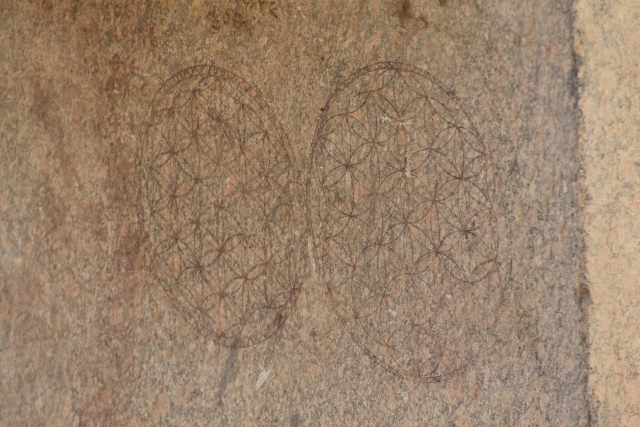 The shape was not painted but was engraved in the rock. This means that even though so scratch of a piece the curious symbols remains. It is carved a few centimeters into the rock.

There are those who dare to say that the symbol seems as if it was engraved with some sort of laser.

Of course, there isn’t actually evidence to support this claim, other than the fact that ‘it looks like that’.

Denisovan DNA Discovered in a Tibetan Cave May Be Only 45,000 Years Old - They Lived Alongside Modern Humans! Previous post
Fauci's Treacherous Ties to China and Globalists Next post