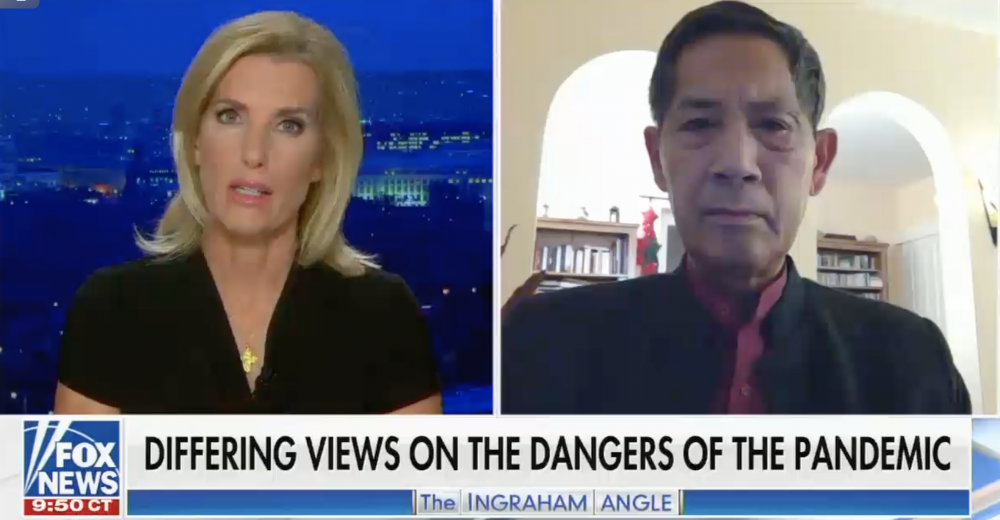 Renowned Scientist Tells Fox News: COVID-19 Jab is ‘Downright Dangerous’ and Will Send You ‘to Your Doom’

On Wednesday, The Ingraham Angle on the Fox News channel broadcast a mind-boggling live interview with a world-renowned microbiologist who said the “looming” COVID-19 jjab is “downright dangerous” and will send you “to your doom.”

The expert, Sucharit Bhakdi, M.D., speaking on a Skype video link from his home in Germany, also said this: 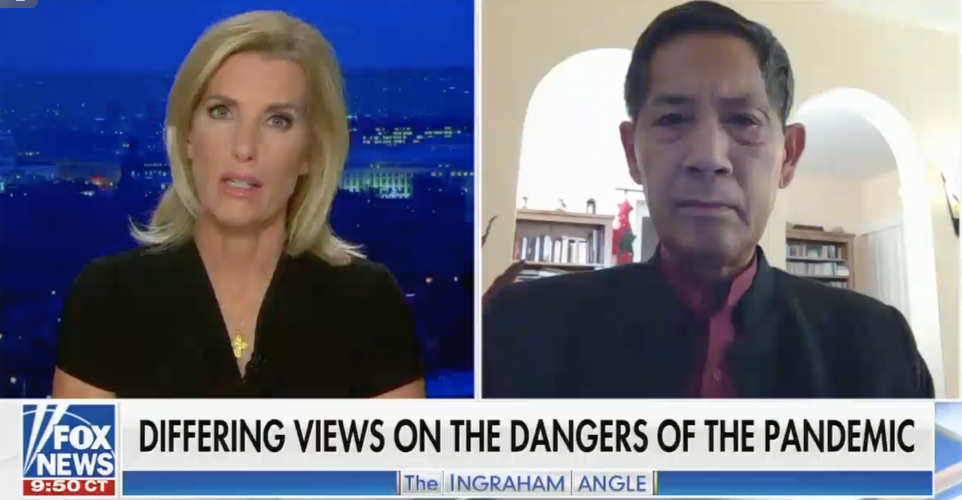 Laura Ingraham, Fox News channel host: On the social distancing and the mask, just to focus on that for a moment, which of those two in your research and your work has been the most displaced?

Ingram: Both. Not backed up by the science.

Bhakdi is the co-author of Corona: False Alarm?, a massive bestseller in Germany that was published in English here on October 2.

The book is currently the #1 bestseller in the Amazon categories of Microbiology, Pulmonary Medicine, and Health Law. It has a 4.8 out of 5 rating after 363 ratings.

In response to Ingraham’s question of why these methods — including masks and social distancing — are being “pushed,” Bhakdi elaborated:

This is something that we — and when I say “we” — hundreds and thousands of people are standing up to say to say “please, all of you, sit down and think about this. Read about this and then make up your own mind. Don’t believe things that people are telling you. Think for yourself and come to you own conclusions.”

That is why we wrote this book, because all the arguments saying — telling you why, what you are doing is absolutely nonsense.

According to his online bio:

Sucharit Bhakdi was born in Washington, D.C., and educated at schools in Switzerland, Egypt, and Thailand.

He studied medicine at the University of Bonn in Germany, where he received his MD in 1970.

He was a post-doctoral researcher at the Max Planck Institute of Immunobiology and Epigenetics in Freiburg from 1972 to 1976, and at The Protein Laboratory in Copenhagen from 1976 to 1977.

He joined the Institute of Medical Microbiology at Giessen University in 1977 and was appointed associate professor in 1982.

He was named chair of Medical Microbiology at the University of Mainz in 1990, where he remained until his retirement in 2012.

Dr. Bhakdi has published over three hundred articles in the fields of immunology, bacteriology, virology, and parasitology, for which he has received numerous awards and the Order of Merit of Rhineland-Palatinate.

In his interview with Ingraham, Bhakdi described as “utter nonsense” Dr. Anthony Fauci’s claim earlier Wednesday during a live interview on The Story with Martha MacCallum on the Fox News Channel that 75% of Americans would need to be vaccinated against COVID-19 in order to achieve herd immunity.

Bhakdi added, “Someone who says this has not the slightest inkling of the basics of immunology.”

In response to Ingraham’s final question, “So you think the COVID-19 jjab is unnecessary?”

Bhakdi replied: “I think it’s downright dangerous. And I warn you, if you go along these lines, you are going to go to your doom “(emphasis added).

At that point, Ingraham ran out of time but promised to have Dr. Bhakdi back on her program.

The only video of the segment available at press time was a clip, complete except for Ingraham’s closing comments, posted by Media Matters for America.

Critics of the Fox News channel who are advocating boycotting it might want to reconsider in light of the fact that no other mainstream media source in the United States would touch an interview like this one.

Citizens’ Council for Health Freedom: 'Lockdowns Are Ineffective and Tests Are Flawed' Previous post
Rich People & Journalists Made Exempt From Having to Enter COVID Quarantine Next post