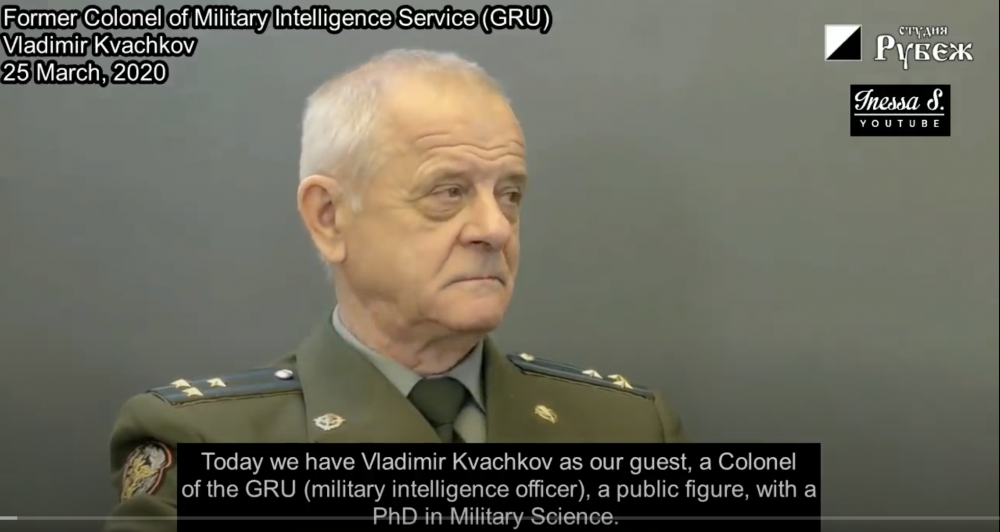 The Coronavirus Depopulation Agenda is exposed in this revealing interview with an ex-Russian military intelligence officer.

I have taken the time to transcribe it in full below, using the translation provided by YouTube translator Inessa S, whose work I trust and value (and have been following for years).

In this climate of Big Tech censorship, with coronavirus videos being taken down rapidly, there is no way of knowing how long it be allowed by the NWO (New World Order) censors to remain up. 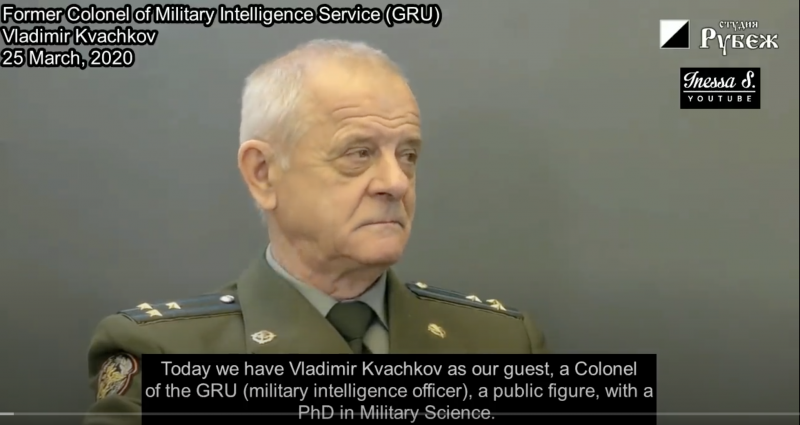 In exposing the coronavirus depopulation agenda, the video connects the dots and gives a deeper perspective of Operation Coronavirus. The interview shows this was recorded on March 25th, 2020.

Interviewer (I): Today we have Vladimir Kvachkov as our guest, a Colonel of the GRU (Military Intelligence Officer), a public figure, with a PhD in military science.

I: Yes, good afternoon, Vladimir Vasilievich. I know you served, among other things, as the leading researcher for the Centre for Defence and Strategic Studies of the General Staff of the Armed Forces. Considering your expertise, what do you make of the coronavirus phenomenon?

V: It’s exactly this perspective that you need to examine it from. Not from the public health perspective, nor epidemiology, etc. The coronavirus phenomenon that they falsely deem a pandemic needs to be examine from the perspective of global powers.

Religious, political, financial, economic and national. The coronavirus phenomenon, the so-called pandemic – and let me tell you, there’s no pandemic, it’s all a lie – needs to be considered as a global, strategic special operation. This is exactly how you need to think of this thing. These are command and staff exercises of the world’s behind-the-scenes powers on controlling humanity. This is what the goal of this coronavirus is.

I’ll repeat it once again. We have little faith in God and even less so in the existence of Satan, the enemy of the human race. So, the aim of the behind-the-scenes Zionist and financial powers is reducing the world’s population. It’s their idée fixe.

They think there’s too many of us ordinary people in the world. There should be around 100 million of their kind and a maximum of 1 billion people on Earth to serve them. Then they’ll be living in abundance here on Earth.

Because, us the people, the earthlings – there’s too many of us for the behind-the-scenes world powers.

This is why the coronavirus and the financial crisis that has emerged almost immediately – they’re inextricably tied to one another. The aim is to stop people’s movement around the world, to curtail political freedoms.

In political terms, it would be practically impossible to do all that. There are differences in constitutions. Whether they’re being implemented or not – that is a different question.

However, there are some political rights that people are accustomed to and they believe they theirs to have forever.

The first attempt to take away those rights from people happened on September 11th, 2001. Not many seem to remember that, after the so-called attack on WTC towers, Pentagon and White House in the USA, the global war on terrorism was declared.

Let’s remember, in order to understand what the coronavirus is now, let’s analyze that first attempt – the declaration of war on humanity that was disguised as a war on terrorism. That was 19 years ago. The behind-the-scenes world powers created the events of September 11, 2001.

Now they need another excuse for greater control and takeover of humanity. That’s how they came up with the coronavirus. Basically, to put it this way, that’s not a pandemic, not an epidemic.

Even now, I literally looked at the data this morning, 300 people in the world die from it daily. You can imagine what kind of scale this is.

Of course, I’m sorry about each person who dies, but 300 people across 7.5 billion people – that’s basically nothing.

These command-and-staff exercises of the behind-the-scenes world powers have an aim to limit different political rights and make people afraid. The fools are already grabbing food in shops here. Millet, buckwheat, etc.

V: Yeah, even toilet paper? God! Why? The goal is to scare people. Once again, these are command-and-staff exercises of the behind-the-scenes Zionist and financial liberal world powers with the aim of limiting the political rights that people are basically accustomed to having, especially in Western Europe. That’s their second goal.

The first goal is to reduce the population numbers on Earth. That’s their Satanic goal.

The second, political goal of the behind-the-scenes world powers is to seize power.

The third goal is related to finances and power over the economy.

Financial, as we already know, at least those who are interested in this … Now, for every product that exists – please, give me your pencil. Okay. Lets say this pencil costs 1 ruble or 1 dollar – let’s say it’s 1 dollar.

Accordingly, all the financial and economic relations have gone from the real economy to this virtual economy. It’s a financial bubble that exists now and which encompasses, I think, 1 quadrillion and 200 trillion dollars. It’s a complete financial bubble. It needs to be deflated.

FRS, the Federal Reserve System, literally some days ago, that was in February, I think – they introduced a zero percent interest on deposits.

Again, through this artificial international … we see the economy has crashed, it’s clear, accordingly – we can’t meet your domestic demand like we did before, you need to tighten your belts etc.

Now is a very important moment. Note, it allegedly started in China. Even though the Chinese are now adamant and report that the coronavirus was created artificially. It has an artificial origin – it’s been proven scientifically already.

Of course, in every virus, seeing that it’s the simplest kind of microorganism – as far as I remember – mutations can happen, but they’re of an accidental nature.

And when you take the RNA molecule, not DNA – they have RNA – and there’s a part of the genome that’s clearly been carved out and another one inserted in its place – and this happens 3 or 4 times …

It is perfectly obvious that the Chinese scientists have figured this out – it was artificially created and purposely spread, initially in Wuhan.

They had 2 kinds, 2 viral strains. Okay now. And what about Italy, what happened there? How come a strain that is even more dangerous that the Chinese one suddenly appears in Italy? I think now they have a few thousand infected and around 1000 have already died.

But again, 100x more people die in Italy from flu, pneumonia, scrofula and hepatitis. But we don’t talk about that. Instead, we are being served special political information propaganda, psycho-informative propaganda.

Special psycho-informative operation of the world globalist mass media that is serving the behind-the-scene Zionist liberal powers that are creating this terror right now. This is why we need to deal with this phenomenon as we would with a special operation that is conducted in the form of command and staff exercises. Now they’re looking – who’s obeying and who’s not.

In China, they introduced strict measures. But, then comrade Xi went to Wuhan and put the pro-American party faction who took that road in their place. In China, not everything is smooth there.

They have, let’s call them that – a pro-Chinese (patriotic) faction, that’s somewhat close to us, which is associated with Xi Jinping. And there are obviously pro-American ex-Komsomol members that are money-oriented or simply put – have their focus on the ‘dough’ (money). And they, of course, tried to use the coronavirus in Wuhan to gain certain economic and political benefits.

Comrade Xi put them all in their place and, consequently, in was over with the virus in China. And then it started in Europe. Accordingly, we as a military intelligence, look at “who” (it is obvious) and “where” (it is also obvious).

Europe and China are 2 geo-economic adversaries of the USA. And this is where they injected this virus.

This virus also has a 4th dimension as well – the economic one. The first is the religious one – destruction of people on Earth, reducing the population numbers. The second one is to establish political control over humanity.

The third one is the financial deflation of that gigantic financial bubble. And the fourth dimension is the elimination of their geo-economic competition.

This I’m telling you from the perspective of an officer from the Defence and Strategic Studies of the General Staff of the Armed Forces. This is my assessment of the current epidemic.

I: Vladimir Vasilievich, you spoke with clarity, you laid it out military style. Can you give us any military predictions for the nearest future?

V: In connection to the coronavirus?

I: Yes. What do you think, which countries could expect pressure next?

V: Russia, of course. It’s going to be Russia, surely. Because … for America, Russia isn’t an economic competitor.

Now, the main efforts of the behind-the-scenes world powers are focused on causing disruption in China and Western Europe. And Russia is their target on 2 accounts: they want to reduce our population numbers and cleanse our territory. That is still to come. Yes.

I: Of course, we would like to hear your opinion regarding a practical plan of action, how to act, how to protect oneself, some recommendations. Maybe it’s not your field of expertise (of what to do), but maybe you could tell us something.

V: I’m, of course, no epidemiologist. Although, you could say I’m a parasitologist, because you have to be one in order to understand the power structures in Russia.

So, I’m speaking as a military doctor – epidemiologist and parasitologist. Until we’re able to get rid of our internal parasites who rule over us, we won’t be able to tackle other parasites.

This ex-intelligence officer’s perspective is very interesting for a number of reasons. He names 4 agendas at play here: the coronavirus depopulation agenda, the restriction of freedom and rights, the financial agenda (deflating the bubble, crashing the economy) and the geopolitical and geo-economic agenda.

He names the Zionists as part of the shadowy group that is running the world and behind Operation Coronavirus. He refers to it as an exercise, in alignment with Mike Pompeo’s admission of this as a live exercise.

He recognizes from the few people dying that this is no way a genuine pandemic. He sees that this as a continuation of what started in 2001 with the 9/11 false flag op (as I discussed in The New War on Bioterror) – the next phase in their NWO quest to create a global government.

He believes in the evidence pointing to the coronavirus as a deliberately created bioweapon, used to hurt China and Europe.

This last point is the only one I don’t fully agree with, since it assumes there is a “virus” spreading around the world and we can also see that the economic impact upon the US (not just China and Europe) has been massive (especially since mid-March).

Nonetheless, this is a worthwhile account from someone who has seen through the lies.

COVID-19 Lockdowns Are Neither Necessary, Nor Scientific, Nor Helpful Previous post
This Company Created More Than 500 Police Snitching Apps Next post