(LifeSiteNews) — A Canadian soldier has reportedly testified that up to a third of military athletes who participated in the World Military Games in Wuhan, China in October 2019 became violently ill.

The unnamed whistle-blower, who was interviewed by Rebel Media’s Keean Bexte and was identified only as a “senior Canadian Armed Forces member,” said that at the “tail-end” of the games, a lot of the athletes became “really, really, sick” with “lung issues, coughing, vomiting, diarrhea.”

“Very odd symptoms, depending on the person,” the solider said.

According to the Rebel Media, there were 176 Canadian soldiers stationed in Wuhan for the Games, and the way the sick — a third of the total contingent of athletes — were quarantined from the others on the long flight home was to put them on at the back of the Polaris jet.

Senior ranks decided to end this quarantine when the flight arrived and sent the soldiers to their homes, all over Canada.

The document is available in .pdf format HERE, or you can view it as images below: 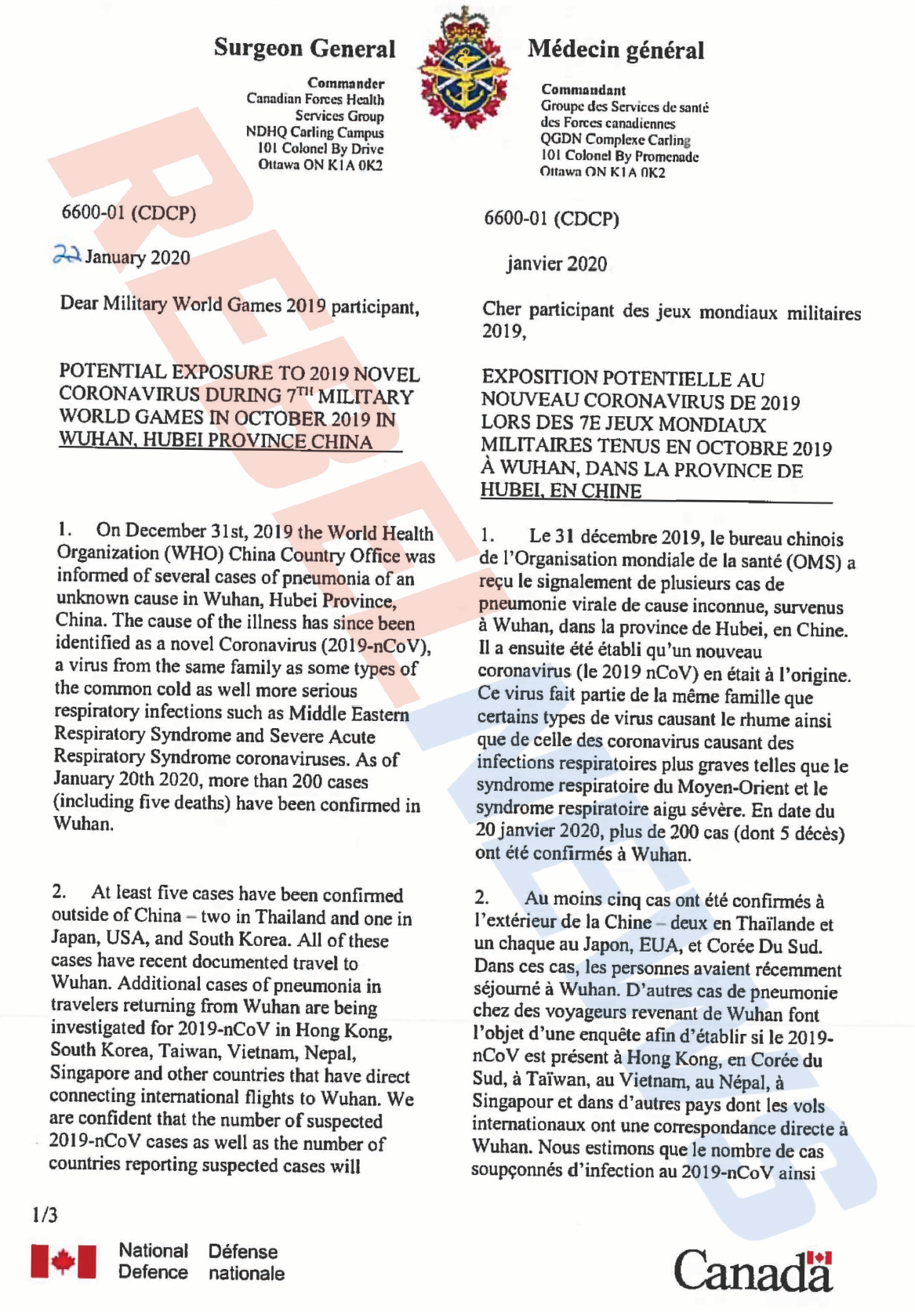 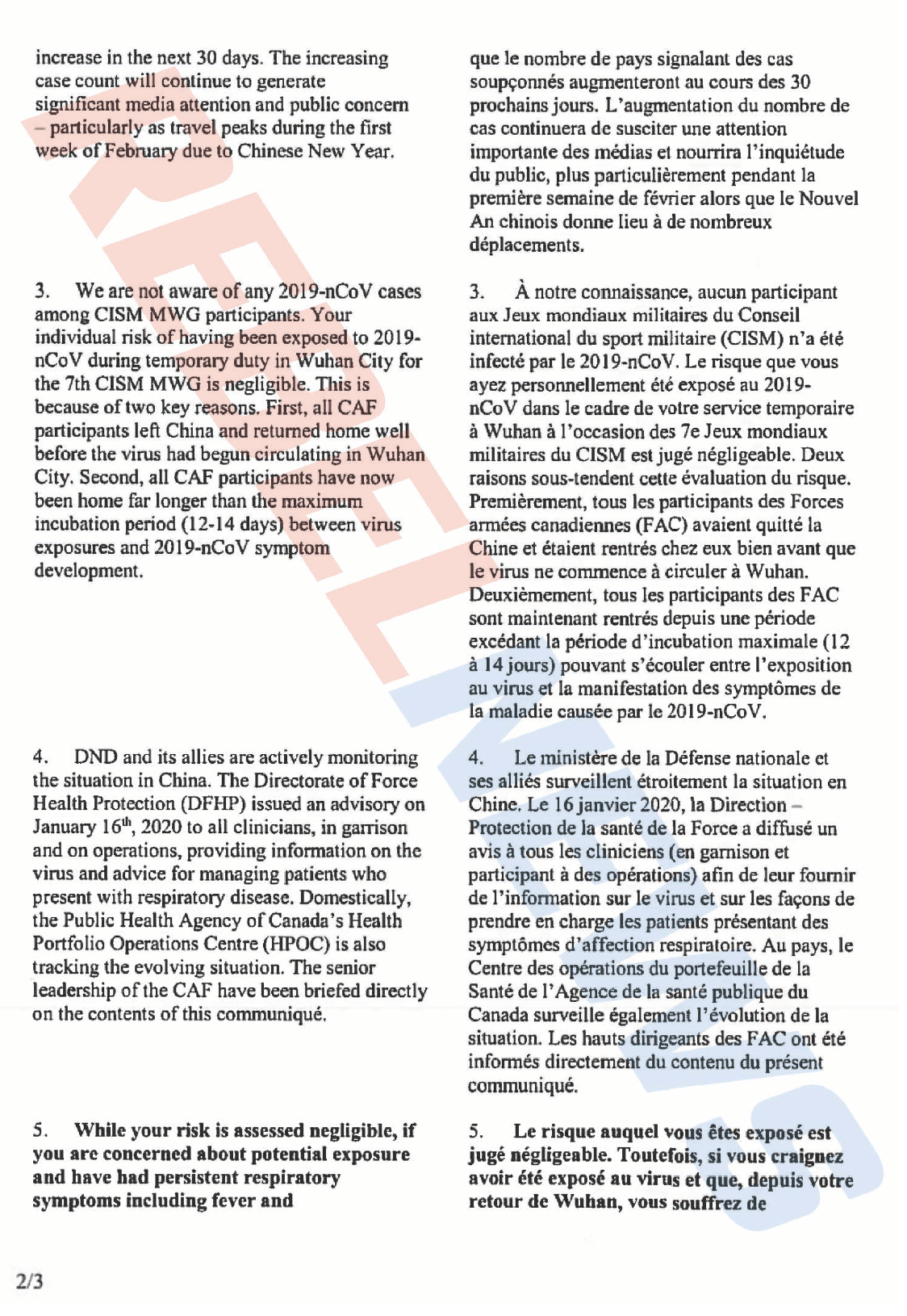 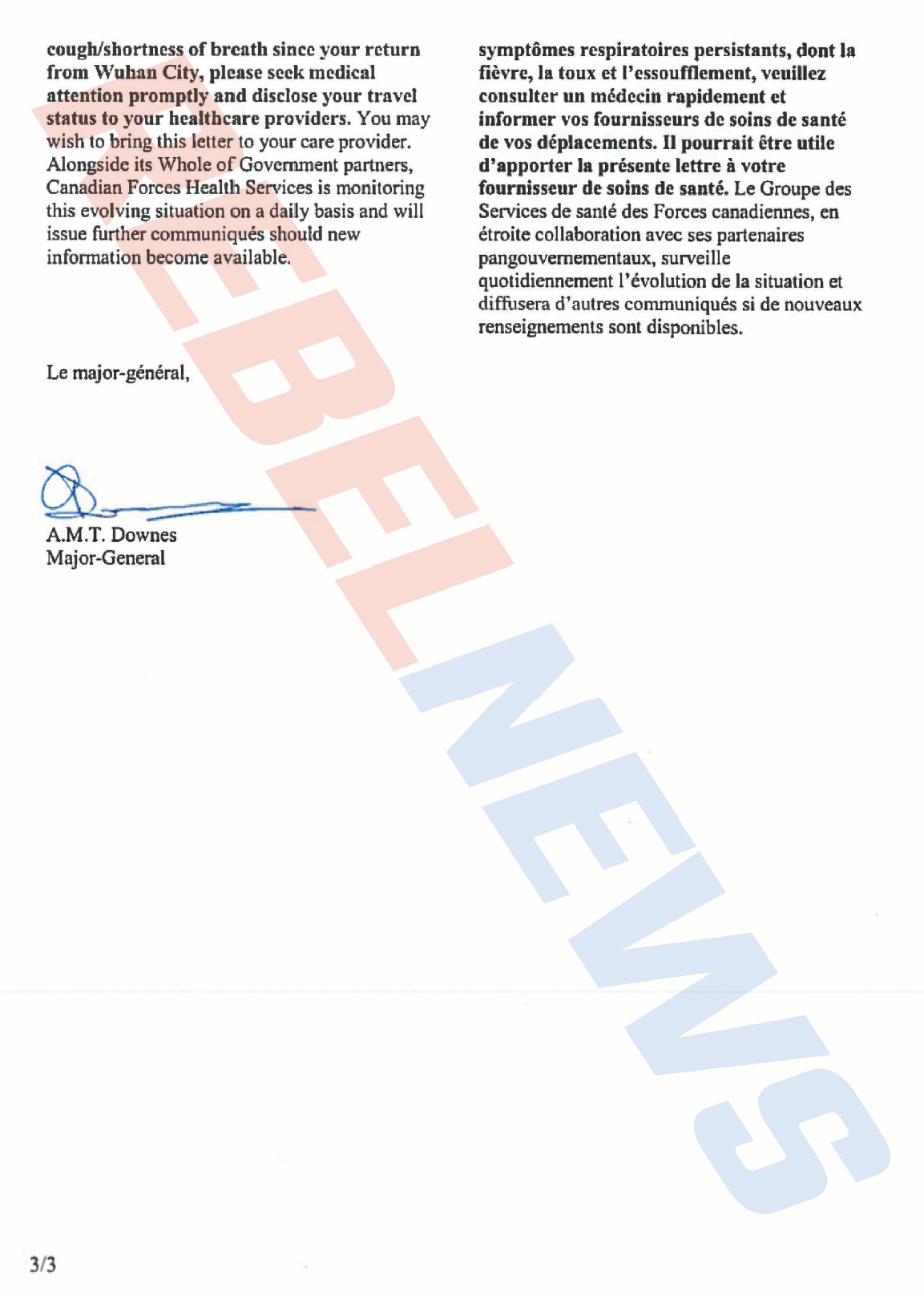 Bexte believes that this might be when Covid-19 made its first appearance in the nation.

“This was just a few weeks before the officially recognized first case [of Covid-19] on November 17,” Bexte said.

“When soldiers started asking to be tested, the answer was no,” Bexte said.

“See, if several dozen Canadian soldiers tested positive for the viral antibodies in 2020, having been infected in October 2019, the Chinese would be in very, very hot water,” he continued.

“Irrefutable proof that they lied.”

The whistle-blowing soldier stated that the main priority for the Canadian government was not to “admit it” and underscored that none of the 176 athletes were tested.

Instead, the Canadian then-Surgeon General, Major-General A.M.T. Downes, wrote a letter on January 22, 2020, about the outbreak of Covid-19 in Wuhan.

The document is called “Potential Exposure to 2019 Novel Coronavirus During 7thMilitary World Games in October 19 in Wuhan, Hubei Province, China.”

“They knew all about this, but they weren’t telling you about it,”Bexte said.

The letter also said that the Surgeon General was not aware of any coronavirus cases among the Military Games participants and that their risk of having contracted the illness was “negligible.”

The Surgeon General’s reasoning was, firstly, that the soldiers had “left China and returned home well before the virus had begun circulating in Wuhan City.”

Secondly, the Surgeon General observed that the soldiers had been home “far longer than the maximum incubation period” between being exposed to the virus and suffering symptoms.

Bexte objected to the Surgeon General’s reasoning, pointing out that the first known case of Covid-19 in Wuhan was detected on November 17.

The journalist stated that the middle-aged man who had the illness could have been infected “14 days prior to that date,” five days before the Canadian soldier-athletes left the city.

“[Prime Minister] Trudeau wants us to believe that our soldiers were just infected by some random virus in Wuhan, causing critical pneumonia and year-long coughing, but nah,” said the journalist sarcastically.

Apparently, there was nobody on the streets when the soldier-athletes got to Wuhan.

Bexte’s military source stated that the soldiers were told that the city of Wuhan had been evacuated and that this was to make it easier for athletes to get to and from the Games.

Looking back, he is now shocked by the implications.

“Why do you think the government decided to hide this secret from […] everyone to ignore the geo-political implications of upending the Chinese narrative and, even worse, why would they refuse to give Canadian soldiers the best healthcare available?” Bexte asked.

The journalist said that Canada’s soldiers put their lives on the line for the country, but that Trudeau was too scared to give them a coronavirus test.

He believes that the answer to his question is that the Prime Minister “wanted to protect his Chinese buddies.”

“Could you imagine the damage?” his source asks. “I mean, was [the illness] Covid?”

“Literally, your own military the Trojan Horse to spreading this thing.”

Other soldiers around the world reported becoming sick at the Military Games in Wuhan in October 2019.

In May a sporting blog called “Inside the Games” stated that close to 10,000 soldiers from over 100 countries took part in the Games and that soldier-athletes from France, Germany, Italy, Luxemburg, Iran (eleven Iranian athletes even died) and Sweden had all reported getting sick.

“When we arrived in Wuhan, we were all sick. All six people in my apartment were sick, including many athletes from other delegations,” the 37-year-old Italian told the Corriere della Sera newspaper.

“I had a severe cough, many other athletes had a fever,” said Tagliariol, who won gold in epee fencing in Beijing in 2008. The worst awaited him when he returned to Italy.

“I had a very high fever and could not breathe. Antibiotics did not help either. I was sick and very weak for three weeks. Then my two-year-old son Leo fell ill. He coughed for three weeks.

“My partner also got sick, but in When I started talking about the virus, I thought: I was infected. I recognized the symptoms of COVID 19. I am an athlete, I was very bad for my standards,” said Tagliariol.

Jacqueline Bock, part of the German volleyball team, told The Mail on Sunday how she and her colleagues contracted Covid-19 at the event in the city:

‘After a few days, some athletes from my team got ill,’ she said. I got sick in the last two days.’

It comes after French pentathlete Elodie Clouvel, 31, claimed she and her 27-year-old partner Valentin Belaud contracted the virus at the Games.

Among dozens of other competitors contacted by the MoS, some said they had been told not to comment.

According to an article published by Radio Farda, Iran, eleven of the athletes who fell ill in Wuhan, have died:

“A 22-year-old member of Iranian women’s futsal national team, Elham Sheikhi, was the first athlete publicly named as a victim of Covid-19. Ms. Sheikhi was from the province of Qom that was the epicenter of the deadly outbreak.

“The eleven athletes who died of the novel coronavirus were engaged in basketball, boxing, chess, futsal, judo, soccer, taekwondo, and wrestling.”

Why did so many Iranian athletes died? Were they exposed to a deadlier strain of the virus?

An investigation of COVID-19 cases in the [U.S.] military from official and public source materials shows that a strong correlation exists in COVID-19 cases reported at U.S. military facilities that are home bases of members of the U.S. team that went to Wuhan.

Before March 31, when the Pentagon restricted the release of information about COVID-19 cases at installations for security reasons, infections occurred at a minimum of 63 military facilities where team members returned after the Wuhan games.