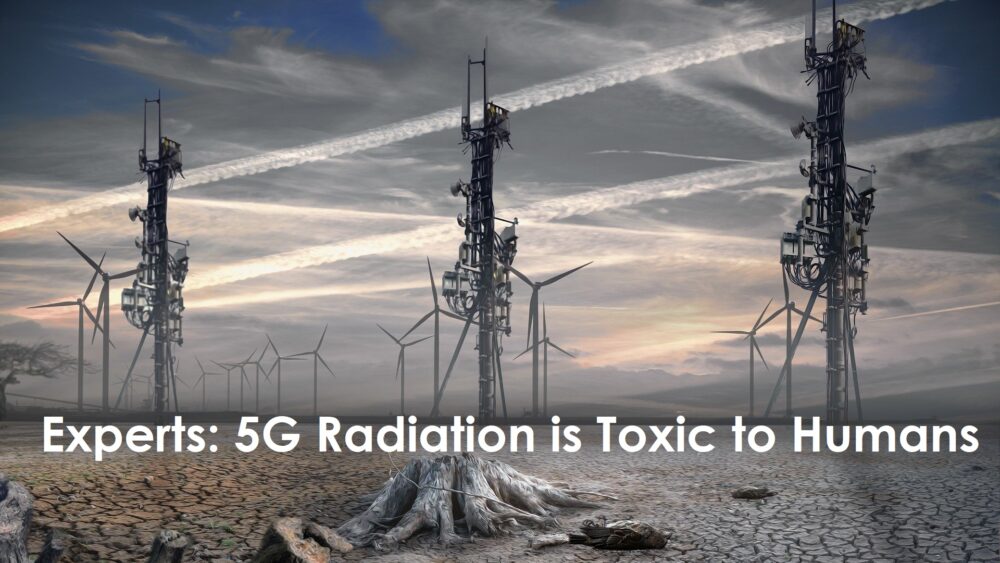 The New Hampshire Commission to Study the Environmental and Health Effects of Evolving 5G Technology put together a study which found that wireless devices and the towers that power them are damaging to people, plants, animals and insects.

This damage is significant, by the way, altering the human body especially in ways that for many people result in serious chronic illness and a lifetime of pain and suffering.

Because 5G technology requires antennas to be placed much closer together than existing 4G and 3G technologies, the general public is being exposed to radiation at levels never before seen throughout human history.

“The structure required to support 5G will place cell antenna ports close to your home and workplace, making it nearly impossible to avoid and raising your risk of excessive oxidative stress that may lead to anxiety, depression and Alzheimer’s,” warns Dr. Joseph Mercola.

“It is important to get involved in helping to prevent implementation of 5G by contacting your local lawmakers and signing local petitions,” he adds. “Consider taking steps in your home to reduce exposure.”

If 5G was really just about “faster speeds,” fiber optics would have sufficed

As it turns out, the nationwide installation and activation of 5G towers has been taking place at warp speed all throughout the Wuhan coronavirus (COVID-19) “pandemic.”

Relentless lockdowns and “stay at home” orders have made it easier than ever for 5G purveyors to plaster the nation in new towers.

With everyone distracted by the “virus,” regulators are fast-tracking approval for 5G installation just like they are for President Donald Trump’s “Operation Warp Speed” COVID-19 jjabs.

Under the guise of bringing “faster” and more “efficient” internet to the millions of people who, thanks to the plandemic, are now working at home, those pushing 5G are blanketing our land with a technological death sentence.

According to Jonathon Adelstein, head of the Wireless Infrastructure Association, 5G is “4G on steroids.” In truth, it is actually a whole new spectrum that operates at millimeter wavelengths, which “unzip” human DNA and allow for external tampering and manipulation of the human body.

“It’s not the faster speeds of 5G that are of concern to scientists but, rather, the distribution of wireless data when in most cases it could be routed more easily and less expensively over fiber optic cables,” Dr. Mercola warns.

All but one commission member agreed that 5G threatens all life

After House Bill 522 was passed in New Hampshire, establishing a 5G investigatory task force, the commission formed came to the conclusion that 5G is fundamentally dangerous for pretty much all life.

Its 13 members, whose expertise ranges from epidemiology and occupational health to toxicology, physics, engineering, electromagnetics and the wireless industry itself, found that, according to the available science, 5G radiation is intrinsically unsafe.

“There is mounting evidence that DNA damage can occur from radiation outside of the ionizing part of the spectrum,” the commission members wrote in a report.

“The Commission heard arguments on both sides of this issue with many now saying there are findings showing biological effects in this range. This argument gets amplified as millimeter waves within the microwave range are beginning to be utilized.”

Their recommendation is to launch “an independent review of the current RF standards of the electromagnetic radiation in the 300MHz to 300GHz microwave spectrum,” the purpose being to identify all of the health risks associated with cellular communications.

Dr. Joel M. Moskowitz, PhD., from the University of California, Berkeley wrote in an article for Scientific American that because 5G will accompany 4G rather than replace it, there could also be “synergistic effects” from “simultaneous exposures” to both.

MD on Pandemic: We Are Reaching an Unthinkable ‘Level of Totalitarianism’ Previous post
Biden to 'Immediately' Send Congress Bill That Would Offer Citizenship to 11 Million Illegals Next post