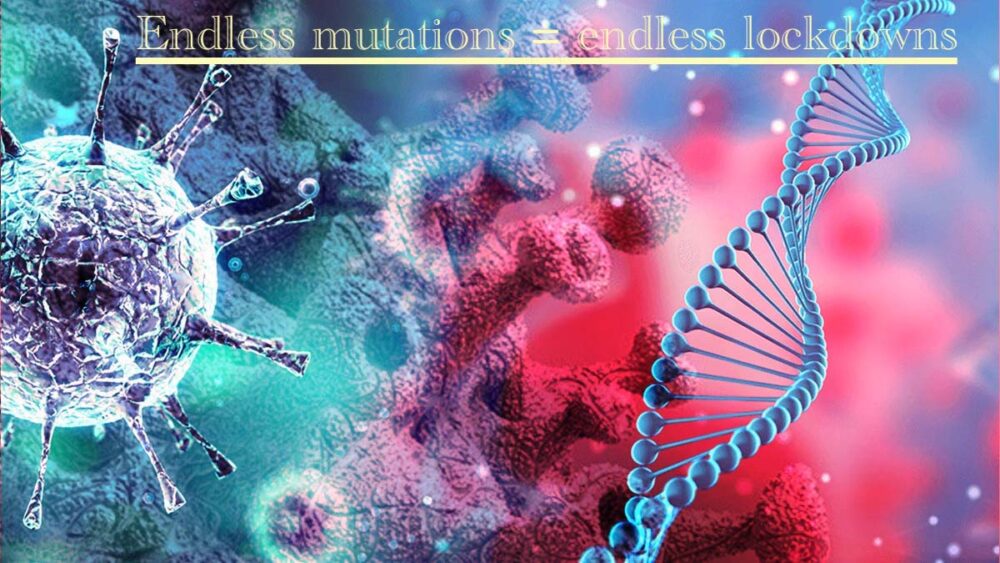 Mounting mortality data show COVID-19 is hardly the deadly pandemic it’s been made out to be. But just as people were starting to wake up to this fact, the British technocracy came up with a new narrative to keep the fearmongering going. 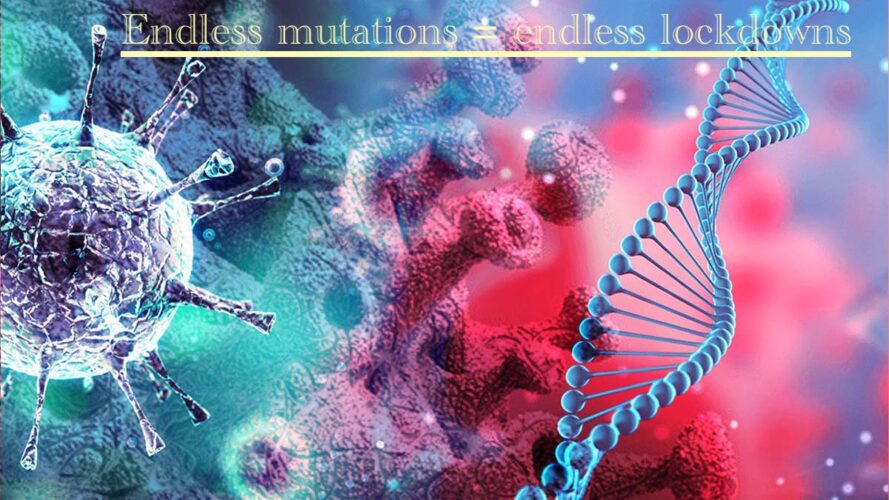 The answer? Another round of even stricter stay-at-home orders, business shutdowns and travel bans, just in time for the holidays.

According to The New York Times, the U.K. restrictions may remain in effect for months.

Considering these unscientific strategies didn’t work the first or second time around, it strains believability to think they’ll work now.

Indeed, anyone who knows anything about the Great Reset agenda can now see that the lockdowns, which destroy local economies and small businesses, have nothing to do with public health.

They are mere smokescreens for the greatest transfer (if not theft) of wealth the world has ever seen.

Despite the obviousness of the scheme, countries are responding to the news of the mutation with fervor.

The mutated strain, referred to in some places as B1175 and in others as VUI-202012/01,6 reportedly began popping up in patient samples collected in September 2020 across southern England.

In all, the virus is said to have 23 new mutations, several of which affect how the virus attaches to and infects human cells, potentially making it more virulent.

British researchers claim the mutation has rapidly displaced previous variants of the virus. In mid-November 2020, 28% of COVID-19 cases in London were attributed to B117.

The following graphic from the U.K. government illustrates the spread of the virus from September through mid-December in London and the U.K. as a whole.8 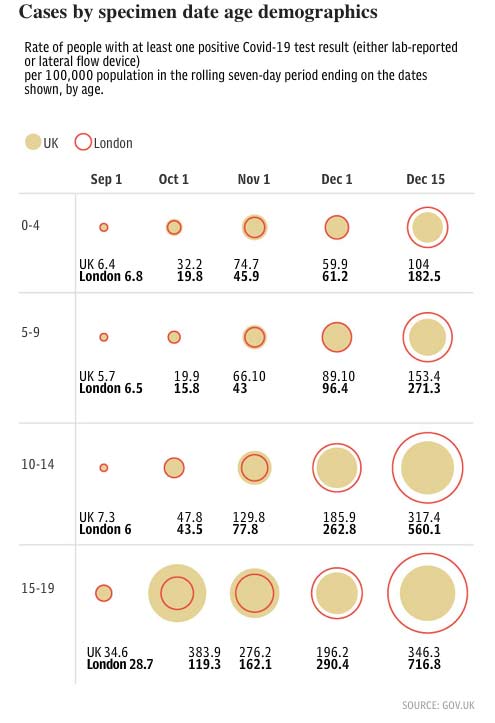 According to absolutely untrustworthy and disgraced epidemiologist Neil Ferguson, whose models have been grossly incorrect thus far, B117 may be 50% to 70% more contagious than previous variants circulating in the U.K.9

B117 also appears to infect children and teens to a greater extent than previous variants. According to Wendy Barclay, a government adviser and virologist at Imperial College London, children may be “equally susceptible as adults” to this new strain.10

However, while said to transmit more easily, B117 does not appear to cause more severe disease.

A mutated variant of SARS-CoV-2 that has one of the mutations found in B117 has also been identified in South Africa. This virus is now found in 90% of samples analyzed.11

While mainstream media are hyping these new variants for all their worth, The New York Times reports that “Researchers have recorded thousands of tiny modifications in the genetic material of the coronavirus as it has hopscotched across the world.”

In other words, mutations are nothing new. In fact, the virus has reportedly picked up one or two mutations per month since the start of the pandemic.12

What’s surprising about B117 is the unusually high number of mutations that seemingly emerged all at once.

One possibility that might explain this is that it evolved inside someone who was immunocompromised and therefore ended up battling the infection for an extended period of time.13

According to the Covid-19 Genomics Consortium UK, high rates of mutations have also occurred in immunosuppressed COVID-19 patients who received convalescent plasma. As explained in a Telegraph op-ed by Matt Ridley:14

“In a person with a deficient immune system, a large population of viruses can proliferate, mutate and diversify, and then the treatment selects a new strain from among this diversity. Essentially, the virus has a crash course in evolution.”

Still, that doesn’t mean there’s cause for hysteria.

As noted by Dr. Deepti Gurdasani, a clinical epidemiologist at Queen Mary University of London, as mass vaccination programs get off the ground, “selection pressure” on the virus will further increase, which she suspects will trigger even more mutations,15 which in turn might reduce the effectiveness of COVID-19 jjabs.

“Several recent papers17,18,19,20 have shown that the coronavirus can evolve to avoid recognition by a single monoclonal antibody, a cocktail of two antibodies or even convalescent serum …”

Show Us the Evidence

As London and southeast England faced strict, new lockdowns in the days before Christmas, British scientists were demanding to be shown evidence that B117 is in fact 50% to 70% more contagious.

“I’ve been doing this job for 25 years and I can tell you can’t establish a quantifiable number in such a short time frame. Every expert is saying it’s too early to draw such an inference.”

He also stated the lack of transparency was “undermining public trust” in the government and its response measures.

The data on the new strain come from an analysis by the New and Emerging Respiratory Threats Advisory Group (NERVTAG), but none of the data have been released to the scientific community.

“It has massive implications, it’s causing fear and panic, but we should not be in this situation when the government is putting out data that is unquantifiable. They are fitting the data to the evidence. They see cases rising and they are looking for evidence to explain it,” Heneghan said.22

Conservative MPs have also called for the scientific evidence relating to the mutant strain to be made public.23

Former minister Sir Desmond Swayne stated the new Christmas lockdown rules had “all the characteristics of the government being bounced by the science, as it was right at the beginning … when we first went into lockdown last March.”24

The new restrictions were announced after Parliament had already discussed and voted on a less restrictive set of Christmas rules before going on break. In an interview with BBC Radio 4 Today, Swayne said:25

“The arrangements for Christmas were explicitly voted on by Parliament. If they’re to be changed then in my view, Parliament should vote again … irrespective of the Government acting in an emergency.

Nevertheless, it’s perfectly proper to recall Parliament … to at least ratify those changes. Explain to us — we are after all a democracy — explain to the elected representatives the evidence that they have and why they’ve reached this decision.

They’ve been looking at it [the new variant] since September. How convenient when Parliament went into recess … suddenly they were then able to produce this revelation. Let’s see the evidence then.

Let’s have Parliament back and show us and convince us, come clean. I want Parliament to be recalled so we can scrutinize properly, in a democracy, decisions that are being made which affect our economy radically and our liberty.”

Former Tory leader Iain Duncan Smith laid the bulk of the blame on the government’s scientific advisers and accused chief medical officer professor Chris Whitty and chief scientific adviser Sir Patrick Vallance of “stepping back into the shadows when it suits them.”26

“Why did they not alert ministers to the dangers earlier? Especially when, as we now know, scientists learnt about this mutation back in September,” Smith wrote in an op-ed in The Telegraph.27

Is It a False Alarm?

Indeed, if the new, wildly different strain was discovered September 20, why all of a sudden is it an emergency a full three months later — especially considering the fact that the research still hasn’t been done to confirm whether this variant actually is any worse than previous strains?

“The situation could prove to be a false alarm. Sometimes virus variants appear to seem to spread more easily but in fact are being propelled by luck, like a superspreader event.

British teams, and some abroad, are now racing to carry out the lab experiments necessary to demonstrate whether the new variant really infects human cells more easily, and whether jjabs will stop it; those studies will involve exposing the new strain to blood plasma from COVID-19 survivors or vaccinated people, to see if their antibodies can block it …

The mutations seen in the new variant have all been spotted previously, according to comments posted online by Francois Balloux, a computational biologist at the University of College London, but apparently not in this combination.

They include one that causes the spike protein to bind more effectively to human cells, another linked to escape from human immune responses, and a third adjacent to a biologically critical component of the pathogen.”

Lockdowns May Prevent Natural Weakening of the Virus

Circling back to where we started, with the uselessness of lockdowns, in his op-ed in The Telegraph, Ridley29 points out that viruses naturally weaken over time as more and more people are exposed, and that by implementing tougher lockdowns, the virus primarily spreads among the sickest, which allows the most lethal strains to dominate.

“It is a worrying possibility that lockdowns could prevent this natural attenuation of the virus. They keep the virus spreading mainly in hospitals and care homes among the very ill, preventing the eclipse of lethal strains at the hands of milder ones. If so … then not only do lockdowns fail to wipe out the disease, they may be prolonging our agony.” – Matt Ridley

In other words, by shutting everything down, the natural weakening of COVID-19 is prevented, which is the precise opposite of what we want. Ridley writes:30

“Viruses will always evolve to be more contagious if they can, but respiratory viruses also often evolve towards being less virulent. Each virus is striving to grab market share for its descendants.

The best way of achieving this is to print as many copies of itself as possible while in a human body, yet not make that person so ill that they meet fewer people.

Where the [lockdown] sceptics have a point is that it is a worrying possibility that lockdowns could prevent this natural attenuation of the virus.

They keep the virus spreading mainly in hospitals and care homes among the very ill, preventing the eclipse of lethal strains at the hands of milder ones. If so, and it’s only a possibility, then not only do lockdowns fail to wipe out the disease, they may be prolonging our agony.”

Lockdowns Are Not the Answer

Shutting down the world over a respiratory virus will perhaps go down in history as the most destructive and irrational decision ever made by public health “experts,” the World Health Organization and its technocratic allies.

I’ve written other articles about its effects — which aside from the transfer of wealth from the working class to the global elites, include a rise in food insecurity, mental health problems, excess deaths unrelated to COVID-19, domestic violence, child abuse, sex abuse and suicide — so I won’t belabor that here.

What’s become clear is that lockdowns are a cure far worse than the disease.

It’s time to fight back, and to resist any and all unconstitutional and tyrannical edicts. To do that, we must overcome fear, as it is a fearful public that allows the technocratic elite to rip away our freedoms. It’s fear that allows tyranny to flourish.

I urge you to really look at the data, so you can see for yourself that panic is unwarranted, and that the so-called “solutions” to the pandemic are in fact a path of total destruction.

This destruction — both moral and economic — is necessary for the Great Reset to occur.

The technocratic elite need everything and everyone to fall apart in order to justify the implementation of their new system.

Without this desperation, no one would agree to what they have planned.

For practical strategies on how you can respond in light of all the tyrannical interventions that have been imposed on us, check out James Corbett’s interview with Howard Lichtman below (BitChute):

I also recommend reading “Constitutional Sheriffs Are the Difference Between Freedom and Tyranny.”

By Dr. Joseph Mercola, author of author of Fat for Fuel: A Revolutionary Diet to Combat Cancer, Boost Brain Power, and Increase Your Energy