A pastor in Calgary says his wife was put in mandatory quarantine in Canada after her flight arrived in Calgary. Officials told Nikki Mathis she would be required to quarantine for two weeks. And authorities will not disclose where they took the woman.

Shortly after the story broke that Nikki Mathis was transported under police surveillance to an undisclosed location for quarantine from Calgary Airport (despite having tested negative prior to her flight), the Justice Centre announced its intent to submit a letter to the federal government, calling this line of action unconstitutional and demanding her immediate release.

An Edmonton pastor may have found out the hard way Thursday night about Prime Minister Justin Trudeau’s new travel restrictions during the COVID-19 pandemic.

Trudeau announced Friday morning all returning travellers into the country must go to a government isolation centre where another COVID-19 test will be taken. If a passenger tests negative, they will be allowed to return home for a strictly-enforced another 11 days. Those testing positive will be taken to another government facility for the rest of their 14-day quarantine.

Trudeau said it will cost each traveller about $2,000 for the cost of the test, accommodations and food.

The new rules weren’t even announced yet Thursday night, but it appears officials at YYC were ready. 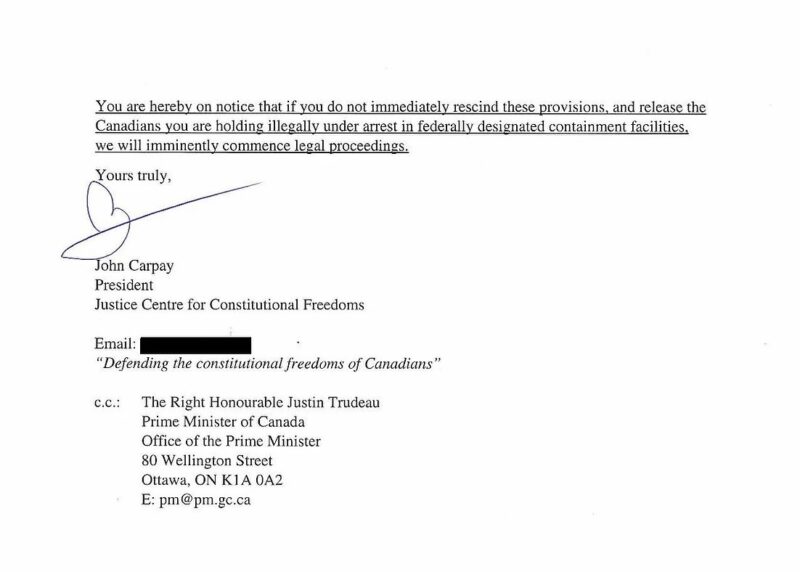 Also read: Portuguese judges upheld a lower court ruling that forcibly quarantining four German tourists after one tested “positive” for Covid-19 was unlawful because the PCR test is inherently fraudulent.

“(My wife Nikki) arrived in Calgary tonight and when she got there she was greeted by a Police Officer and an AHS official,” wrote Pastor Chris Mathis on his Facebook page.

“They rejected her results and told her she needed to go immediately to an isolation facility. She was told if she resisted she would be arrested. She called me, and I immediately asked to talk with the officer. I talked with both a police officer and the AHS official, they reiterated what she had said to me. I asked for the address of where she would be, they said they could not give me the location address as it was confidential.