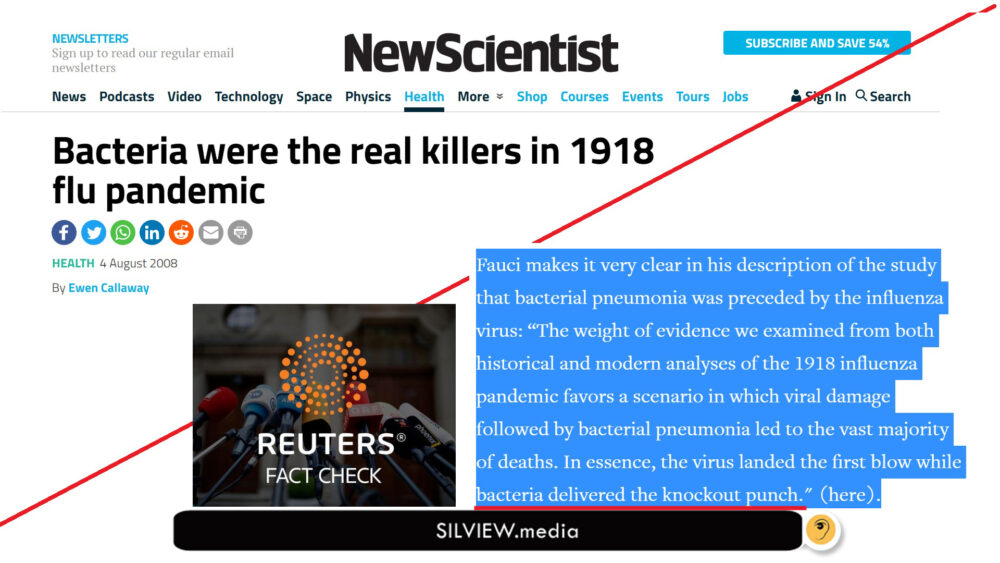 War is peace and truth is fake news in Covidiocray. 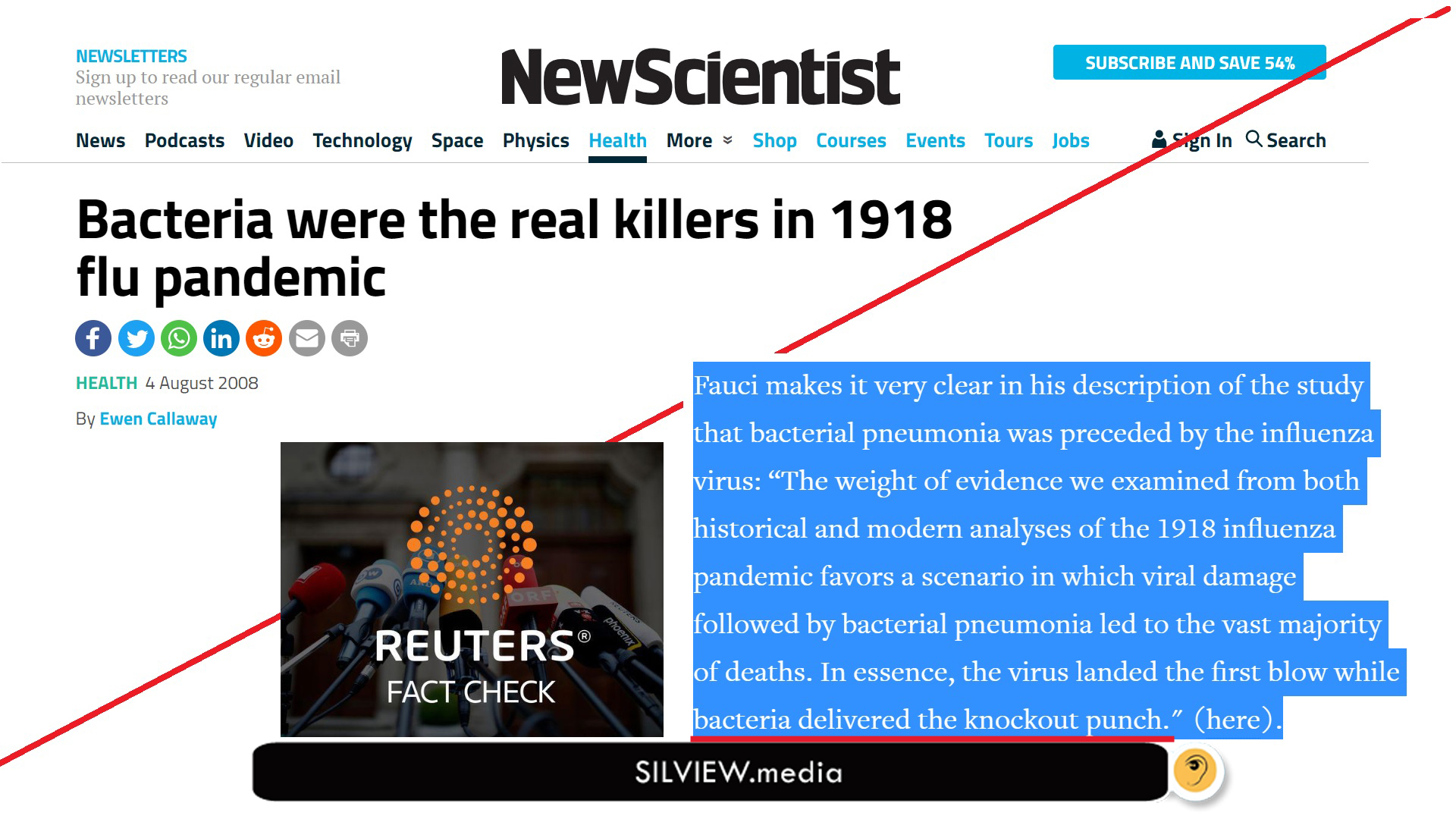 Reuters confirming what they were trying to debunk: that bacteria were the real killers in the 1918 flu pandemic.

I hear there’s many more “fact-checks” on this, published by other presstitutes, that all seem copied from the same press-release or something… 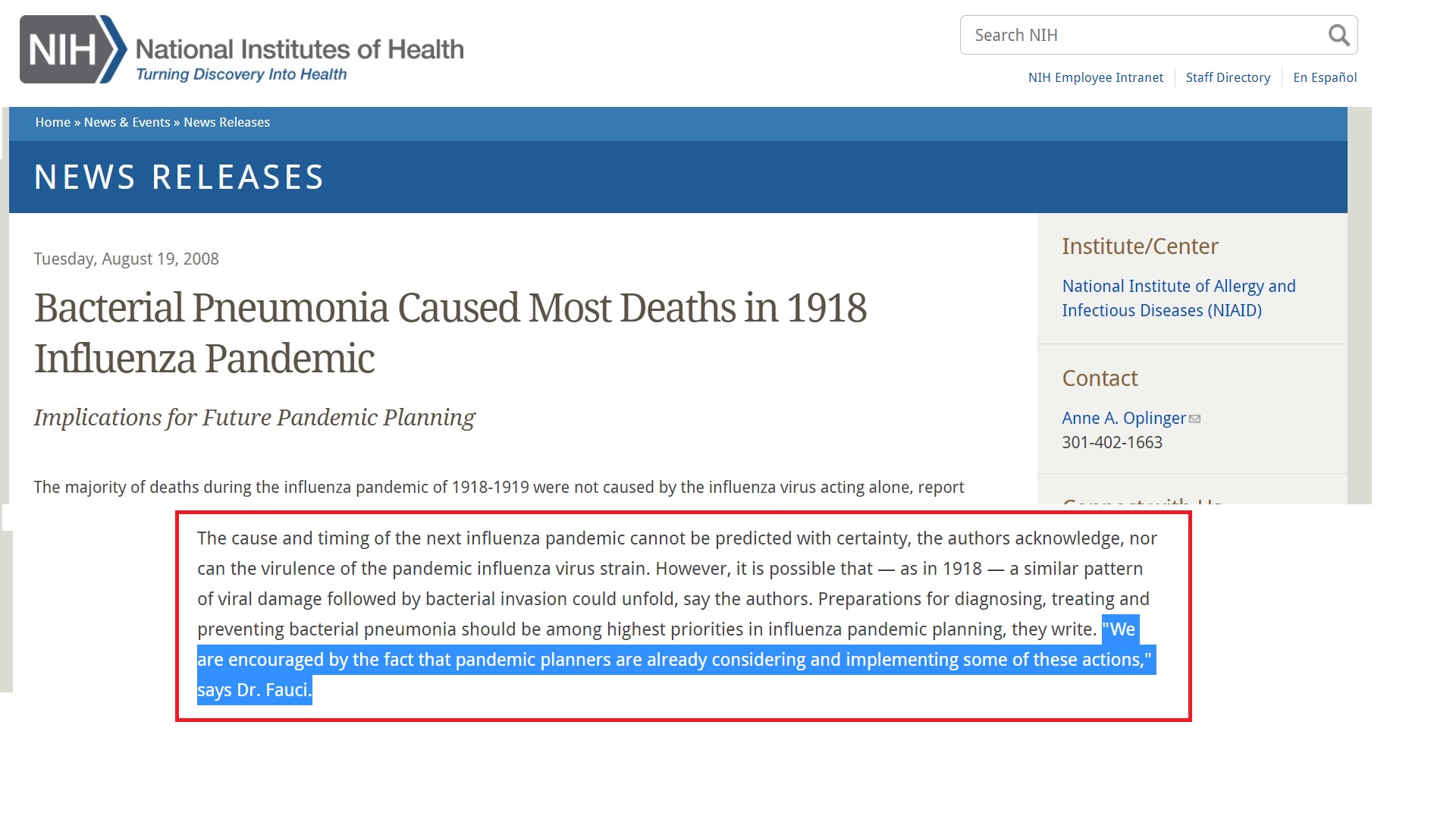 First off: a New Scientist short article, as old as 2008, in verbatim copy, to take the bacteria debate out of the way

Bacteria were the real killers in 1918 flu pandemic 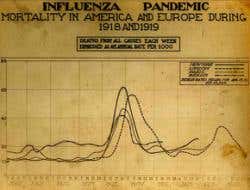 Image: US National Museum of Health and Medicine

Medical and scientific experts now agree that bacteria, not influenza viruses, were the greatest cause of death during the 1918 flu pandemic.

Government efforts to gird for the next influenza pandemic – bird flu or otherwise – ought to take notice and stock up on antibiotics, says John Brundage, a medical microbiologist at the Armed Forces Health Surveillance Center in Silver Spring, Maryland.

Brundage’s team culled first-hand accounts, medical records and infection patterns from 1918 and 1919. Although a nasty strain of flu virus swept around the world, bacterial pneumonia that came on the heels of mostly mild cases of flu killed the majority of the 20 to 100 million victims of the so-called Spanish flu, they conclude.

“We agree completely that bacterial pneumonia played a major role in the mortality of the 1918 pandemic,” says Anthony Fauci, director of National Institute for Allergy and Infectious Disease in Bethesda, Maryland, and author of another journal article out next month that comes to a similar conclusion.

That pneumonia causes most deaths in an influenza outbreak is well known. Late 19th century physicians recognised pneumonia as the cause of death of most flu victims. While doctors limited fatalities in other 20th-century outbreaks with antibiotics such as penicillin, which was discovered in 1928, but did not see use in patients until 1942.

This is not to say that flu viruses do nothing, says Jonathan McCullers, an expert on influenza-bacteria co-infections at St Jude Children’s Research Hospital in Memphis, Tennessee.

McCullers’ research suggests that influenza kills cells in the respiratory tract, providing food and a home for invading bacteria. On top of this, an overstressed immune system makes it easier for the bacteria to get a foothold.

However, the sheer carnage of 1918 caused many microbiologists to reconsider the role of bacteria, and some pointed their fingers firmly at the virus.

When US government scientists resurrected the 1918 strain in 2005, the virus demolished cells grown in a Petri dish and felled mice by the dozen.

“The 1918 pandemic is considered to be – and clearly is – something unique, and it’s widely understood to be the most lethal natural event that has occurred in recent human history,” Brundage says.

But to reassess this conclusion, he and co-author Dennis Shanks, of the Australian Army Malaria Institute in Enoggera, Queensland, scoured literature and medical records from 1918 and 1919.

The more they investigated, the more bacteria emerged as the true killers, an idea now supported by most influenza experts.

For instance, had a super virus been responsible for most deaths, one might expect people to die fairly rapidly, or at least for most cases to follow a similar progression. However, Shanks and Brundage found that few people died within three days of showing symptoms, while most people lasted more than a week, some survived two – all hallmarks of pneumonia.

Military health records for barracks and battleships also painted a different picture. New recruits – men unlikely to have been exposed to resident bacteria – died in droves, while soldiers whose immune systems were accustomed to the local bugs survived.

And most compelling, Brundage says, medical experts of the day identified pneumonia as the cause of most deaths.

“The bottom line is we think the influenza virus itself was necessary – but not sufficient – to cause most of the deaths,” he says.

As the world’s health experts prepare for the next influenza pandemic, many have looked to 1918 as a guide, planning for a deadly super-virus.

Coronavirus And The Sun: A Lesson From The 1918 Influenza Pandemic

The H5N1 bird flu strains jetting around the world seem to kill humans without the aid of bacteria, but those viruses aren’t fully adapted to humans, McCullers says. If H5N1 does adapt to humans, bacteria may play a larger role in deaths, he adds.

“Everyone is focused exclusively on the virus, and that’s probably not the best idea,” he says.

Antibiotics and jjabs against bacterial pneumonia could limit deaths in the next pandemic. And while an effective influenza jjab should nip an outbreak in the bud, such a jjab could take months to prepare and distribute.

“The idea of stockpiling [bacterial] jjabs and antibiotics is under serious consideration,” says Fauci, who is on a US government taskforce to prepare for the next flu pandemic.

At a recent summit on pandemic influenza, McCullers said health authorities were increasingly interested in the role bacteria might play, but there had been little action taken.

“There’s no preparation yet. They are just starting to get to the recognition stage,” he says. “There’s this collective amnesia about 1918.”

And this is the fun part where Reuters confirms everything in a desperate and hilarious debunk attempt:

Ladies and gents, Facebook’s premium smear-machine aka “fact-checkers”, aka establishment’s mouth-pieces licensed to kill competition, aka world’s #1 news agency are back in the spotlight after another comical attempt against one of our reports.

The scenario is similar: they make up straw-men and give them a naive beatdown with a lot of laughable BS show off. But this one is a legendary performance that needs to become a classic reference.

I peed my pants a little from the first paragraph:

What this means is that for a week, these useless nitwits ran the debunk without even getting the incriminated study right.

Like how do they even breathe… ah, wait, they’re maskers…

After a bunch of fill in because they’re paid by word, they land their only point and argument:

To claim the 1918-1919 flu pandemic deaths were caused by bacterial pneumonia alone is inaccurate. (Reuters)

I bolded “alone” because that’s how they attempt to “virus” the discussion.

No one said “alone” before them and no one made the claim they are arguing.  So no, they debunked a claim they themselves made up. Or did they?

More so, in exactly the paragraph that precedes their argument, they 200% CONFIRMED the claim that went viral:

Dr. Fauci neglected to let the public know that he was co-author on a paper that found this:

1918-1919 pandemic deaths were mostly from bacterial pneumonia. (See Endnote 17 in our paper.)

Why did that happen? #Maskshttps://t.co/FK6o9HG9Fl

Fauci makes it very clear in his description of the study that bacterial pneumonia was preceded by the influenza virus:

“The weight of evidence we examined from both historical and modern analyses of the 1918 influenza pandemic favors a scenario in which viral damage followed by bacterial pneumonia led to the vast majority of deaths. In essence, the virus landed the first blow while bacteria delivered the knockout punch.” (here). – Reuters

That part bolded in Fauci’s quote is our claim, it proves the official narrative was BS for over a century and now we have Reuters to vouch for it. Thank you, Reuters, we couldn’t advance The Great Awakening so fast if you NPCs weren’t polar opposites to genius! 😉

And guess what, they can’t even beat their own strawman, because the flu may have started something in 1918, but bacteria ALONE delivered the knockout punch. And there would be no knockouts is it wasn’t for knockout punches, ya kno…

So, maybe to claim the 1918-1919 flu pandemic deaths were caused by bacterial pneumonia alone is NOT that inaccurate.

If someone breaks your legs and someone else takes advantage later to kill you, only the latter goes to jail for homicide. And, to be honest, I could use more evidence on the lethal contribution of that first viral blow. 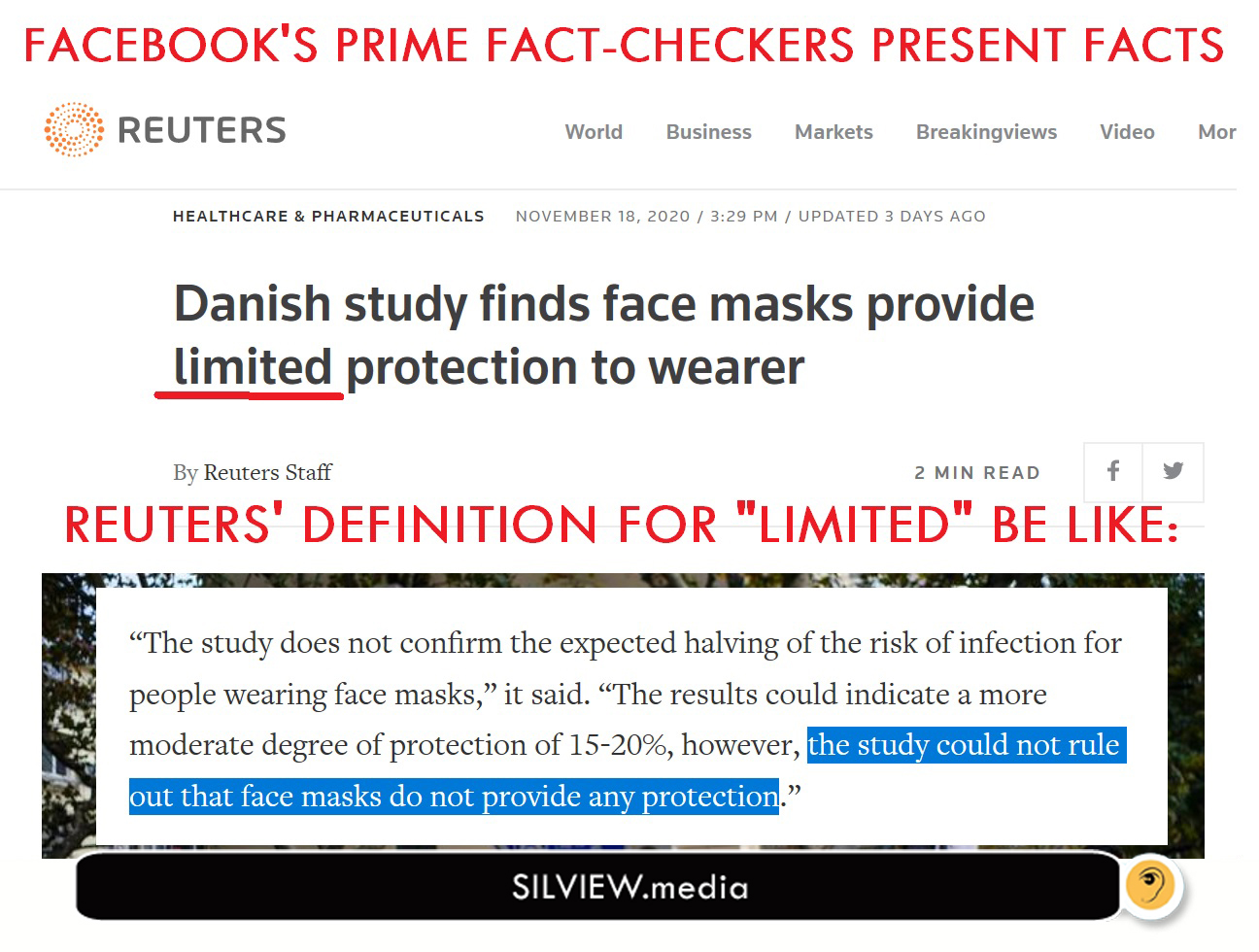 Children can debunk a Reuters debunk

As for the mask connection, science has not definitively demonstrated the direct causal relationship between masks and the 1918 bacterial pneumonia pandemic, but, based on the knowledge available so far, masks are generally associated with higher bacterial risk, from candida to “maskne”.

So don’t tell people to look elsewhere, if you find a better culprit, first write a paper and get the Nobel you deserve.

Until then, we have all the reasons to point at masks as a very likely suspect and demand much more caution. 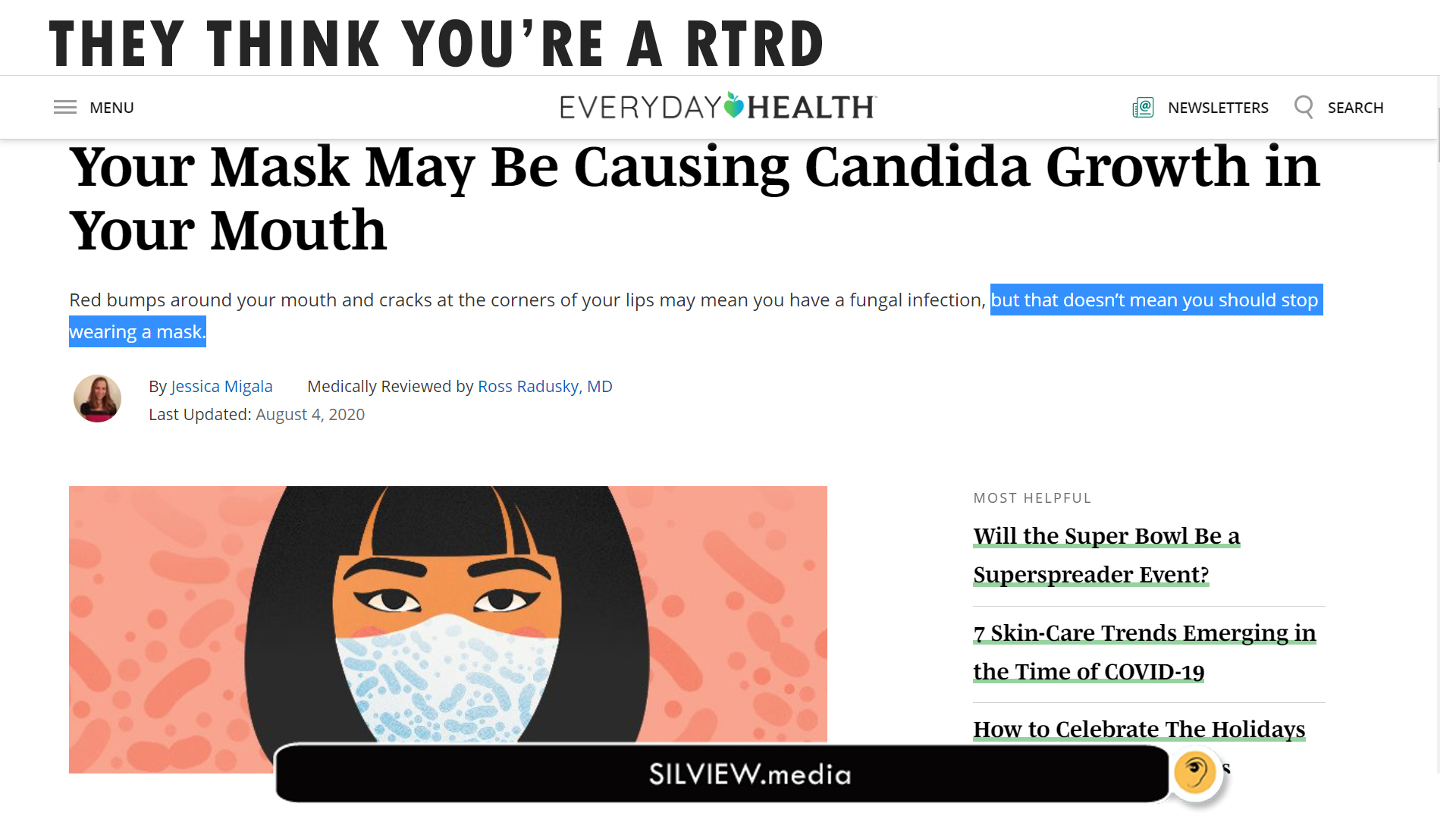 No one has even attempted that paper in quite a while because no one’s been that dumb, but we can always hope that from Reuters.