Coronavirus Fact-Check: Does Wearing A Mask Do Anything?

As of two days ago, Boris Johnson’s government announced it will henceforth be illegal to use public transportation in the UK, without wearing a mask.

This goes along with many other governments – both local and national – which have enforced mandatory mask-wearing to one extent or another.

Leaving aside the question of whether such steps are necessary to combat a virus they openly admit is harmless to the vast majority of people – the question becomes: Do masks actually do anything to prevent the spread of this disease? Or respiratory diseases in general?

Well, some mask manufacturers don’t seem to think so. Printing this warning on the side of the box: 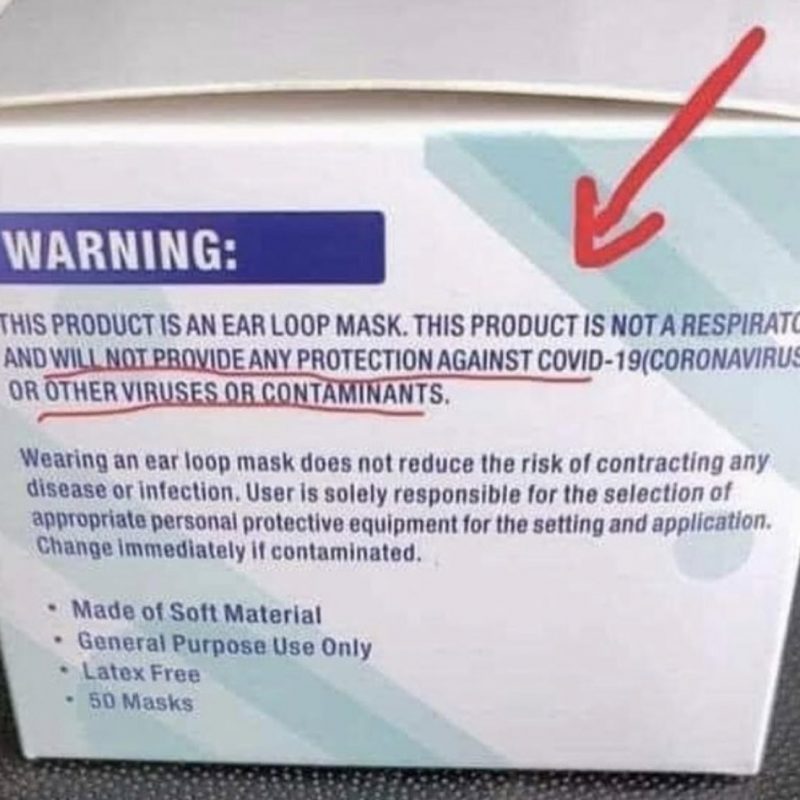 But, in case that’s just a company seeking to prevent liability, maybe we should look at some proper scientific research on the subject. There’s quite a bit of it.

Most of the media and politicians are strident in their support of enforced mask-wearing, but the science supporting that is thin on the ground.

While the Lancet and Mayo Clinic have produced articles recommending mask use, actual scientific studies are hard to come by.

The only evidence-based review I was able to find is forced to use very soft language in its conclusions. Titled [my emphasis] “Cloth Masks May Prevent Transmission of COVID-19″, it openly admits [again, my emphasis]:

“Although no direct evidence indicates that cloth masks are effective in reducing transmission of SARS-CoV-2, the evidence that they reduce contamination of air and surfaces is convincing.”

Other, purportedly scientific, publications have reduced themselves to publishing alarmist, unscientific, non-factual arguments that source the Los Angeles Times in place of any research, statistics or peer-reviewed papers.

The lack of hard science backing the government’s position on masks is evidently a concern in the propaganda networks, because they produce articles like this one in today’s Guardian:

Which tries to turn it from a fact-based consideration into an ethical argument (A very common tactic among people who know they would lose an evidence-based debate):

“this debate is as much about values as facts.”

Despite the narrative push in favour of masks, the science is far from settled.

With many papers – notably those pre-dating the Covid19 outbreak – suggesting masks do little-to-nothing to prevent the spread of viral respiratory infections.

A review of several mask-related papers, entitled “Why Face Masks Don’t Work” and conducted in 2016, found that [my emphasis]:

“Between 2004 and 2016 at least a dozen research or review articles have been published on the inadequacies of face masks. All agree that the poor facial fit and limited filtration characteristics of face masks make them unable to prevent the wearer inhaling airborne particles. In their well-referenced 2011 article on respiratory protection for healthcare workers, Drs. Harriman and Brosseau conclude that, ‘facemasks will not protect against the inhalation of aerosols.'”

“Health care workers have long relied heavily on surgical masks to provide protection against influenza and other infections. Yet there are no convincing scientific data that support the effectiveness of masks for respiratory protection.”

“It should be concluded from these and similar studies that the filter material of face masks does not retain or filter out viruses.”

To sum up: viruses are very, very, very small. Microns across. You can only see them with an electron microscope. As such the weave of a cloth mask provides almost no resistance to their passage.

The possible limitations of masks as a preventative are not a secret.

On May 21st, the New England Journal of Medicine published an article titled Universal Masking in Hospitals in the Covid-19 Era, which states:

“We know that wearing a mask outside health care facilities offers little, if any, protection from infection.”

“If you do not have any respiratory symptoms such as fever, cough or runny nose, you do not need to wear a mask,”

However that is disputed by a paper published just last month, but based on research conducted in late 2019 (before the Covid outbreak), which found that [my emphasis]:

“Disposable medical masks are loose-fitting devices that were designed to be worn by medical personnel to protect accidental contamination of patient wounds, and to protect the wearer against splashes or sprays of bodily fluids.

In fact, not only is there substantial evidence masks will not prevent you getting sick, there is some evidence they could actually be counter-productive.

“Moisture retention, reuse of cloth masks and poor filtration may result in an increased risk of infection.”

There’s also the issue of other possible complications, such as hypercapnia, an excess of carbon dioxide in the blood caused by re-breathing your own expelled air.

The benefits of mask-wearing are, at best, unproven. The dangers, unknown. You wouldn’t expect this simple scientific question to be in any way controversial.

After receiving over 400,000 views, it was summarily removed for “spreading information that could cause harm”.

Clearly the establishment really wants us to wear masks. What’s less clear is why.

Greek City Blocks 5G Pilot Program Due to Risk of Infertility Previous post
Covid-1984 is Never Going Away — Unless YOU Say STOP! Next post