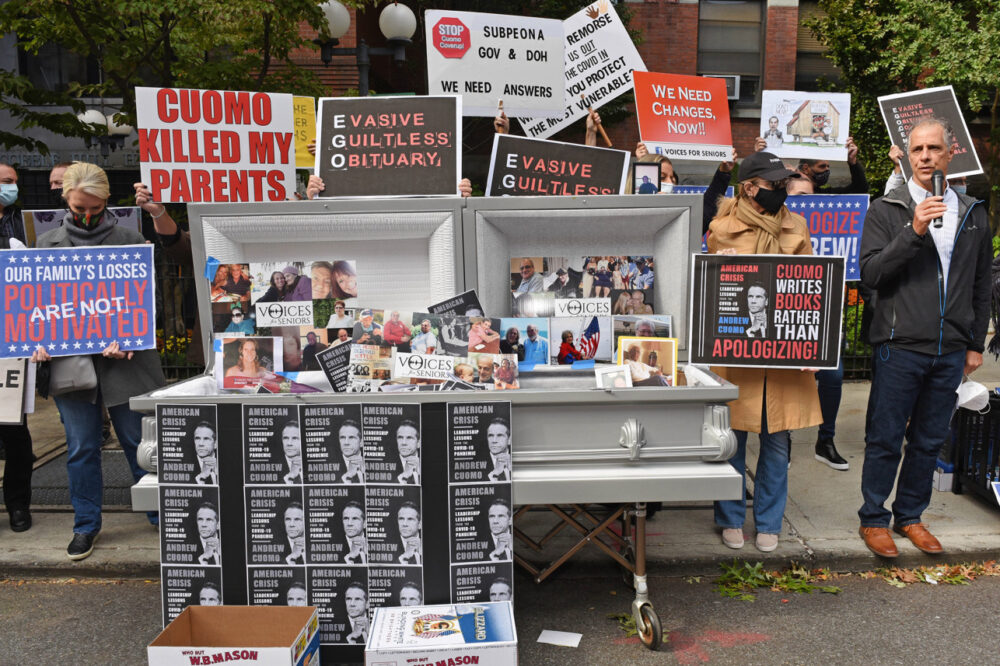 New York Governor Andrew Cuomo is finally facing the heat for his botched and criminally negligent coronavirus response policies, yet no one seems to be asking why Cuomo and select governors made the fateful decisions that led to the excess deaths — and the coverup campaigns — of tens of thousands of senior citizens in New York and elsewhere across the United States. 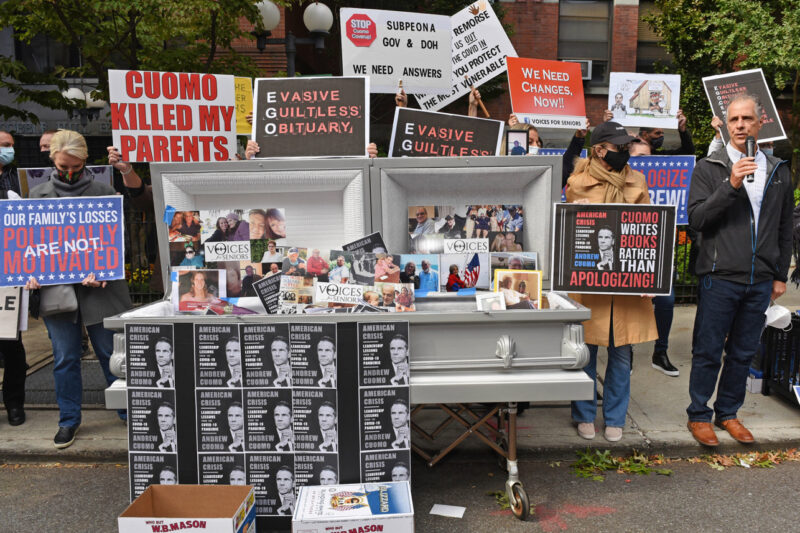 After being awarded an Emmy and writing a book on his supposedly heroic response to the pandemic, Cuomo is finally receiving the very necessary inquiries into his handling of the crisis.

Cuomo is perhaps the most egregious example of abuse and neglect (given his refusal to use the Javits Center or a Navy hospital ship), he is far from the only governor who executed the “nursing home death warrants.”

Governor Cuomo was accompanied by the governors of California, New Jersey, Pennsylvania, Michigan, and elsewhere.

The common thread seen in the United States is the delegation of state policy to prediction modeling forecasts from the Institute for Health Metrics and Evaluation (IHME), a Washington State-based institution that is wholly controlled and funded (to the tune of hundreds of millions of dollars) by The Bill and Melinda Gates Foundation.

In March and early April, politicians were informed by the modeling “experts” at Gates-funded IHME that their hospitals were about to be completely overrun by coronavirus patients.

Modelers from IHME claimed this massive surge would cause hospitals to run out of lifesaving equipment in a matter of days, not weeks or months. Time was of the essence, and now was the time for rapid decision making, the modelers claimed.

On two separate April 1 and April 2 press conferences, Cuomo made clear that his policy decisions were based off of the IHME model.

“There is a group that is funded by the Gates Foundation. Thank you very much Billy Boy,” Cuomo said on April 1 in discussing ICU needs and how he was using Gates models to make other healthcare policy decisions.

According to the Gates Foundation-funded IHME model, 16,000 New Yorkers are expected to die from coronavirus.

Gov. Cuomo: "That would mean that NY is only 16% roughly of the number of deaths … What that does say to the rest of the nation is – this is not just New York." pic.twitter.com/zorNl8asyA

In an April 9 briefing, Michigan Governor Gretchen Whitmer referred to the IHME model in order to project deaths and the PPE resources needed for the supposed surge.

It was the same story with the government of Pennsylvania. The PA Health Department exclusively uses IHME models to forecast coronavirus outcomes.

It wasn’t just state governors relying on this data, federal bureaucrats Dr. Anthony Fauci and Dr. Deborah Birx, both of whom have substantial ties to the Gates network, used the IHME COVID-19 forecasting models (which Birx endorsed specifically as the best prediction modeling outfit) to make policy recommendations to states.

In her White House briefings, Birx, who simultaneously had a seat on the board of a Gates-funded institution, almost exclusively relied on IHME models to project outcomes.

Some people defending Dr. Birx haven’t followed this debacle from the beginning. Birx, tied to IHME propaganda operation, should’ve been fired after presenting Murray and Ferguson models to Trump in late March. She and Fauci told him to shut down economy: https://t.co/hwpBkIaHsr

These models, and the policy decisions that were made by relying on them, set off a chain of events that led to indefinite lockdowns, complete business closures, statewide curfews, and most infamously, the nursing home death warrants.

States across the nation went to extremes, resorting to full bunker mode while waiting for bodies to start dropping in the streets, but the IHME modeling never panned out.

Hospital capacity was never threatened. Most states that had created “surge capacity” pop-up health care centers never even used these facilities. IHME, for its part, regularly “adjusts” its models, and has never acknowledged their routine failures to forecast outcomes.

Billy Boy has never discussed the catastrophic failures of his prized “health metrics” forecasting organization, and how it has contributed to the suffering of millions of Americans.

Instead, he has seamlessly washed his hands of COVID mania, and has moved on to demanding that the western world sacrifice itself in the name of the latest “crisis” that is climate change.

NEW – Billy Boy on the global green reset: "It's an all-out effort, like a world war, but it's us against greenhouse gases."pic.twitter.com/1ZhWOBE5Xg

You Must Eat 100% Synthetic Beef, Says Billy Boy Who Is An Early Investor In The Fake Meat Industry (And Who Stands to Profit Massively)

In December, however, Melinda Gates stated that “we hadn’t really thought through the economic impacts“ of demanding that people stay locked in their houses indefinitely, among other policy requests demanded by Gates Inc.

The IHME models that demanded lockdowns and other insane restrictions relied entirely on sketchy COVID-19 data coming from the city of Wuhan, China.

The early statistics concerning deaths, hospitalizations, and overall age stratification have not come close to matching the actual data on the virus.

For example, IHME used a 3+% death rate when the real number *from* COVID-19 is only around 0.1%. IHME’s risk projections, which they presented as sound science, were all incredibly overinflated.

The buck does indeed stop with the elected leaders who made the fateful decisions to send sick COVID patients into nursing homes, lock down their states, and mask up their citizens in perpetuity, but that’s only half of the story.

The bad data they used almost exclusively came from the Gates network, which has trafficked in pseudoscience and has demonstrated complete incompetence and reckless forecasting since the beginning of last year.