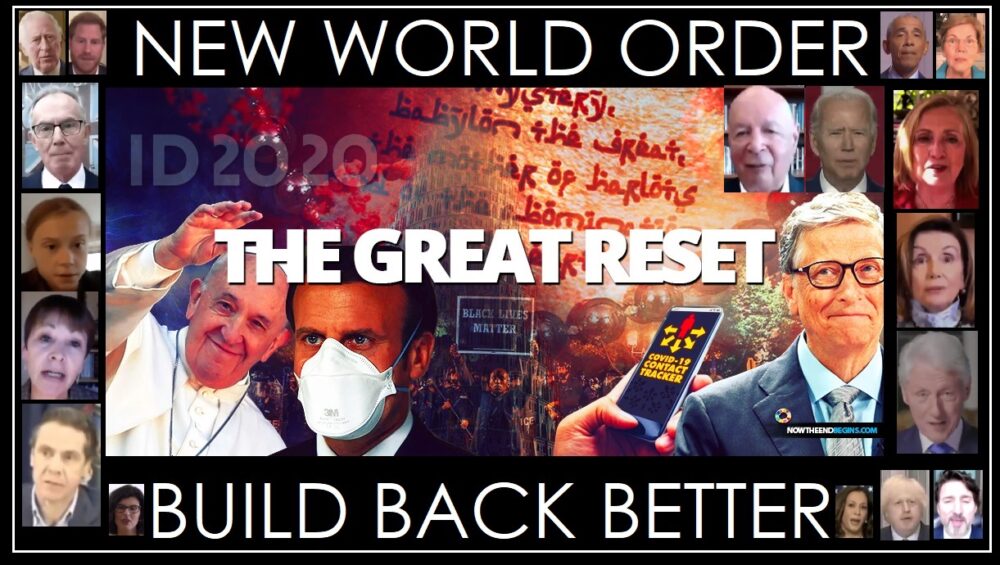 The Manufactured Crisis, the Great Reset and the NWO’s ‘Build Back Better’

Top political figures and Big Tech leaders are using the common refrain that the COVID-19 pandemic has provided an opportunity to “reset” and “build back better.” But what does it really mean to “build back better”?

Founder and executive chairman of the World Economic Forum (WEF) Klaus Schwab first started circulating the idea of The Great Reset, of which “build back better” is an integral part. 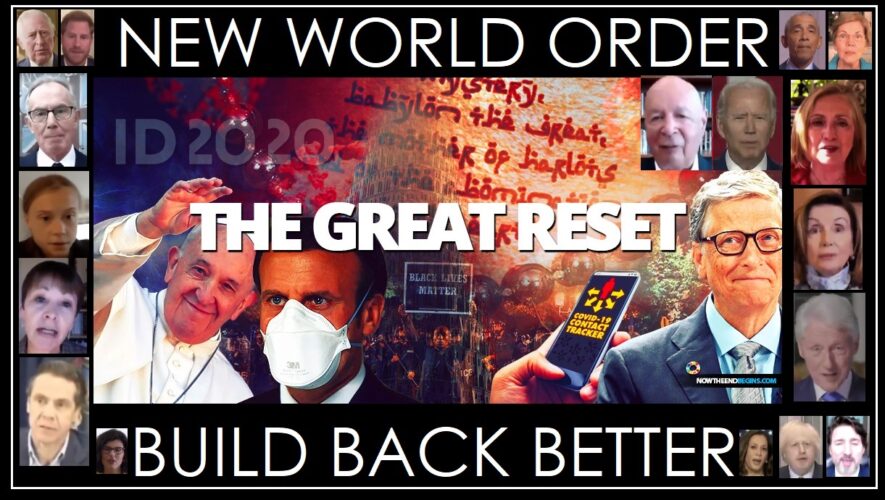 “There is an urgent need for global stakeholders to cooperate in simultaneously managing the direct consequences of the COVID-19 crisis,” WEF states on their Great Reset website. So WEF started The Great Reset initiative as a method to “improve the state of the world.”1

It’s a lofty description but again one that actually tells you nothing. “Build back better” is a tagline of sorts for The Great Reset, and though this is being played off as a new initiative, it’s simply a rebranding of terms for technocracy and the old “New World Order.”

An elite oligarchy is behind this technocratic plan to govern society through technology, programmed by scientists and technicians and automated through the use of artificial intelligence, rather than through democratically elected politicians and government leaders.

COVID-19 Used to Justify the Need to ‘Build Back Better’

The current pandemic is being used as a justification for the movement, but the agenda has nothing to do with health and everything to do with a long-term plan to monitor and control the world through technical surveillance. As Schwab wrote, “There are many reasons to pursue a Great Reset, but the most urgent is COVID-19.”2

Citing pandemic-induced unemployment, record levels of global government debt and a shrinking world economy, Schwab warns that the COVID-19 crisis is going to exacerbate environmental issues and social crises, like rising inequality. The solution? “We must build entirely new foundations for our economic and social systems.”3

Fortunately, he writes, there is a silver lining to the pandemic and that is “it has shown how quickly we can make radical changes to our lifestyles.”4

This will be key to “building back better,” which envisions a world in which you’re tied to an electronic ID linked to your bank account and health records, and have a “social credit” ID that can run every facet of your life. Schwab detailed three main components of The Great Reset agenda:5

1. Steer the Market Toward “Fairer Outcomes” — “To this end, governments should improve coordination (for example, in tax, regulatory and fiscal policy), upgrade trade arrangements and create the conditions for a ‘stakeholder economy.’”

Also known as stakeholder capitalism, Forbes described stakeholder economy as “the notion that a firm focuses on meeting the needs of all its stakeholders: customers, employees, partners, the community and society as a whole.”6

The idea of stakeholder capitalism has been around since at least 1932, and was also endorsed by nearly 200 CEOs of large corporations in August 2019.7 However, it is now being accelerated as part of The Great Reset.

“At a time of diminishing tax bases and soaring public debt, governments have a powerful incentive to pursue such action,” Schwab wrote. “Moreover, governments should implement long-overdue reforms that promote more equitable outcomes. Depending on the country, these may include changes to wealth taxes, the withdrawal of fossil-fuel subsidies and new rules governing intellectual property, trade and competition.”8

Yet, as Forbes pointed out, forms of stakeholder capitalism have already been tried and failed, because balancing conflicting stakeholder claims was near-impossible and only led to mass confusion and poor returns. The failure of this strategy is what led big businesses to focus on maximizing shareholder value instead.

2. Ensure That Investments Advance Shared Goals — Shared goals, such as equality and sustainability, should be at the heart of government and private investments, and rather than funneling government recovery funds and economic-stimulus funding to “fill cracks in the old system,” these should be used to “create a new one that is more resilient, equitable and sustainable in the long run.”

Schwab added, “This means, for example, building ‘green’ urban infrastructure and creating incentives for industries to improve their track record on environmental, social, and governance (ESG) metrics.”9 It all sounds well and good, except, as Technocracy News reported in June 2020, “the promised Utopia comes with a price — it sets shackles on our personal freedom …”10

The required sacrifices do not apply to the technocrats running the system, so ultimately The Great Reset will result in two tiers or people: the technocratic elite, who have all the power and rule over all assets, and the rest of humanity, who have no power, no assets and no say-so in anything.

In terms of government, the Revolution will bring new technological powers that allow for increased population control via “pervasive surveillance systems and the ability to control digital infrastructure.”12 As for as its effects on people, Schwab writes:13

“The Fourth Industrial Revolution, finally, will change not only what we do but also who we are. It will affect our identity and all the issues associated with it: our sense of privacy, our notions of ownership, our consumption patterns, the time we devote to work and leisure, and how we develop our careers, cultivate our skills, meet people, and nurture relationships.

It is already changing our health and leading to a ‘quantified’ self, and sooner than we think it may lead to human augmentation. The list is endless because it is bound only by our imagination.”

Increased Surveillance Is Necessary for the Reset

The planned reform will affect everything from government, energy and finance to food, medicine, real estate, policing and even how we interact with our fellow human beings in general. Part of this involves increased surveillance, which is already being rolled out in the name of public health.

Vaccine passports are one example. Hastily ushered in as a byproduct of the COVID-19 pandemic, they’re expected to become “widely available” during the first half of 2021.14

If the initiative is successful, you’ll likely be required to pull up a jjab certificate on your phone showing when and where you were vaccinated, along with which type of jjab, in order to get on a plane or attend an indoor event, such as a concert, for starters.

WEF and the Commons Project created the Common Trust Network, which developed the CommonPass app that’s intended to act as a health passport in the near future. The app allows users to upload medical data such as a COVID-19 test result or proof of vaccination, which then generates a QR code that you will show to authorities as your health passport.15

The proposed common framework “for safe border reopening” around the world involves the following:16

Eventually, the CommonPass framework will be integrated with already existing personal health apps such as Apple Health and CommonHealth. If you want to travel, your personal health record will be evaluated and compared to a country’s entry requirements, and if you don’t meet them, you’ll be directed to an approved testing and vaccination location.

Privacy concerns are still being raised, however, which is why every effort is being made to get people to loosen their views on the right for privacy. In the U.S., there’s also the Constitution that stands in the way, which is why efforts to undermine, circumvent, ignore or nullify it are increasing.

Even Food Will Be Affected

For those who control resources like food, power is limitless, and control of the food supply is also part of “building back better.” WEF has partnered with the EAT Forum, which will set the political agenda for global food production. The EAT Forum was cofounded by the Wellcome Trust, which in turn was established with the financial help of GlaxoSmithKline.

EAT collaborates with nearly 40 city governments across Africa, Europe, Asia, North and South America and Australia, and maintains close relationships with imitation meat companies such as Impossible Foods, which was co-funded by Google, Jeff Bezos and Billy Boy.17

Billy Boy, by the way, owns more farmland in the U.S. than any other private farmer, having purchased a total of 242,000 acres — much of it considered some of the richest soil in the country — in the past few years.18 Gates is also a supporter of The Great Reset,19 which is curious since his massive accumulation of wealth and land is the opposite of what the Great Reset promotes.

In truth, wealthy technocrats will not redistribute their own wealth during the reset, but will only continue to grow their financial empires as the rest of the world consents to giving up their privacy and ownership of all property.20

EAT developed a “Planetary Health Diet” that is designed to be applied to the global population and entails cutting meat and dairy intake by up to 90%, replacing it largely with foods made in laboratories, along with cereals and oil.21

They Don’t Want to Return to Normal

Many people around the world are counting down the days until the COVID-19 pandemic is over and life can return to normal. But the very purpose of “building back better” is to do away with what was once “normal” and replace it with something different. According to WEF, this entails “reinventing capitalism”:22

“A true recovery from COVID-19 will not be about putting things back together the way they were: we need to ‘build back better’, to ‘reset’, if we are to address the deep systemic vulnerabilities the pandemic has exposed.

“… If we don’t seize this opportunity to build back better – to reset and reinvent rather than ‘return to normal’ – systemic risks and vulnerabilities will continue to accumulate, making future shocks both more likely and more dangerous.

“Despite the tragedy, we must leverage the COVID-19 pandemic, and make sure that it becomes the catalyst for a profoundly positive transformation of the global economy, taking us closer to a world in which everyone can live well, within planetary boundaries.”

The warning signs are all around, for those willing to see them for what they actually are — an unprecedented effort to monitor, modify and control human behavior disguised as pandemic relief.

By Dr. Joseph Mercola, the author of Fat for Fuel: A Revolutionary Diet to Combat Cancer, Boost Brain Power, and Increase Your Energy.