The UNDRR report’s Foreword and press release were opposite the report’s own findings, and spread panic when none was warranted.

German Die kalte Sonne site here presents its latest video on climate news. Today we look at the first part focusing on the UN’s assessment of “Human Costs of Disasters”.

It turns out the press release and the report’s Foreword were misleading and alarmist without warrant. Once again it appears it was all designed to spread panic.

First we note the report’s Foreword, where the UNDRR states there’s been a “staggering rise in climate related disasters” and that industrial countries “are failing miserably on reducing greenhouse gas emissions”:

This dismal announcement was also passed on to the media via press release and instantly the media declared the end was nigh.

Reality: No rise in disasters

Yet, Die kalte Sonne then shows Figure 5 of the UNDRR report, and it shows a totally different picture: There’s been no rise in disasters from storms. 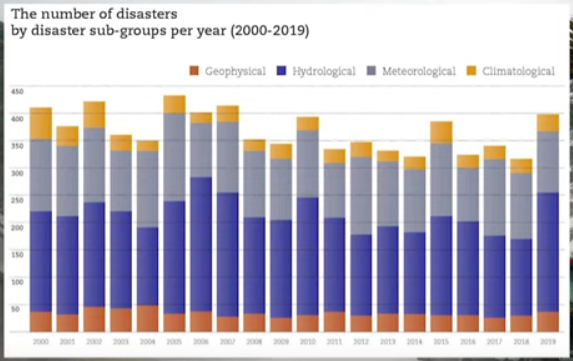 Next Die kalte Sonne shows a chart with the earthquakes removed, made by Roger Pielke Jr., professor at the University of Colorado. Earthquakes have nothing to do with climate and so a clearer picture of the climate and weather impacts emerges. 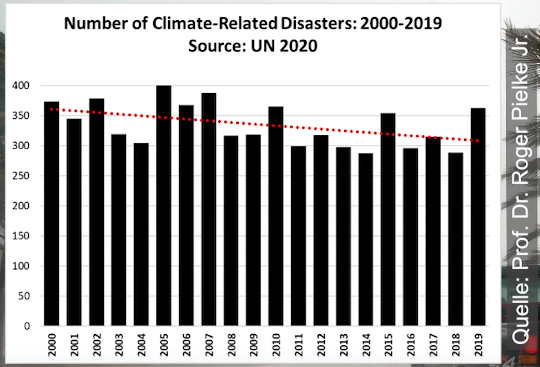 Without earthquakes, the trend for “climate-related disasters” has been clearly downward, dropping around 15%. This is good news and is not even remotely close to what was spread by the lazy and uncritical mainstream press.

The downward trend completely contradicts the claims made in the report’s Foreword and the UNDRR press release. Die kalte Sonne comments:

“It’s still unclear how this reporting failure by the UN came about. The error does not reflect well on the quality assurance of UN reports.”

The Manufactured Crisis, the Great Reset and the NWO's 'Build Back Better' Previous post
12yo Girl Finds Hidden Camera Recording Her in Shower — It Belonged to a Cop Next post