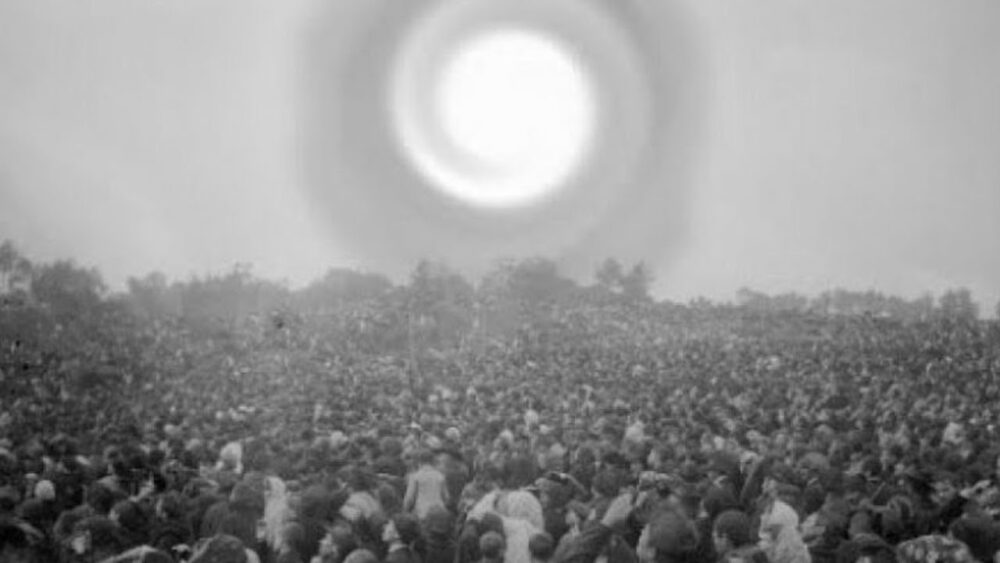 Fátima, Portugal: Over 70,000 People Watched as the ‘Sun’ Whirled Around the Sky

On May 13, 1917, an apparition appeared to three young shepherd children tending to sheep in the town of Fátima in Portugal. The children were ages 7, 9, and 10. 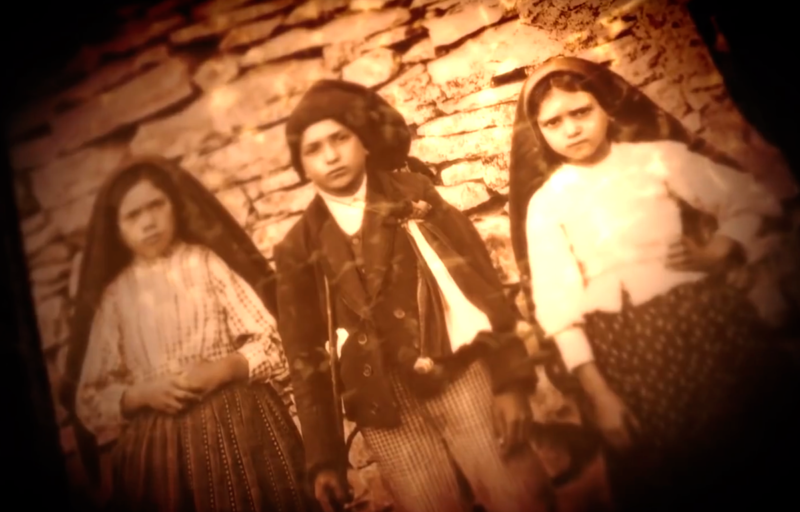 Lucia Santos, 10, and her two cousins, Jacinta, 7, and Francisco Marto, 9 (screenshot via YouTube)

Lucia Santos, the oldest, could see, hear, and talk to the apparition, later referred to as the Virgin Mary. Lucia’s cousins, Jacinta, 7, and Francisco Marto, 9 could not speak to the vision but could see and hear her or only see her.

The apparition, glowing “brighter than a crystal” told the children she would visit them again at the same place above a small oak tree in a field called Cova da Iria on the 13th day of each month for the next six months.

In Lucia Santos’ own words, the apparition was:

“A lady dressed in white, shining brighter than the sun, giving out rays of clear and intense light.” 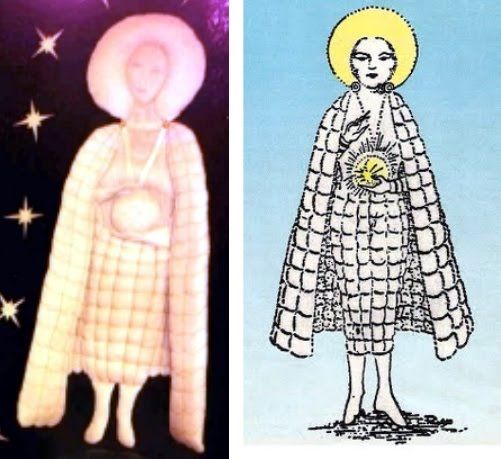 Early drawings of the apparition in Fátima, Portugal

Although the children initially tried to keep it a secret, Jacinta told her mother about the vision. The concerned mother took her daughter to the local priest, and Jacinta refused to change or deny the story.

Then a state bureaucrat took all the children to Vila Nova de Ourem hoping they would recant their story. They all refused.

Word spread through the town and soon crowds started forming as the children made their way to the field on the 13th day.

The crowds grew ever-larger each month even though they saw nothing, they would watch as the children stood transfixed by the vision before them.

The apparition told the children three secrets but asked that they not be revealed until the time was right.

On the final month in October, a crowd of 70,000 people formed to witness what they hoped would be a final important message. The Virgin Mary told Lucia that she would give the crowd a sign.

“In October I will perform a miracle so that all may believe,” said the apparition.

The day was rainy and the crowd was walking through the mud. 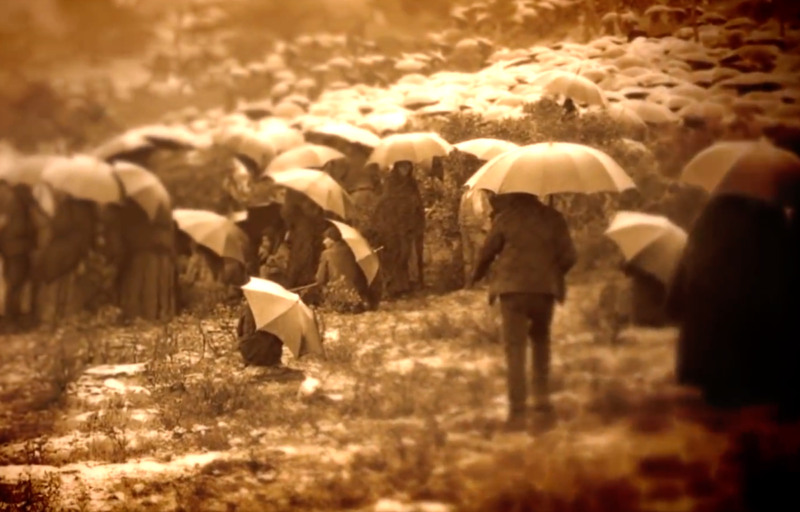 Crowd of 70,000 forms on a rainy day in a field in Fatima, Portugal

Though only the children could see the apparition, Lucia told the crowd to look towards the sun, and thousands of people present for miles around the location reported witnessing what came to be known as the “Miracle of the Sun.”

There were reports that people as far away as 25 miles saw the miracle.

The clouds parted and thousands of people reported seeing a silvery disc emerge, which danced and zigzagged across the sky, appearing to move closer to the viewers.

Bright colored lights in rainbow hues shone down in a “psychedelic, pinwheel pattern,” according to some accounts. The strange display went on for 10 minutes. 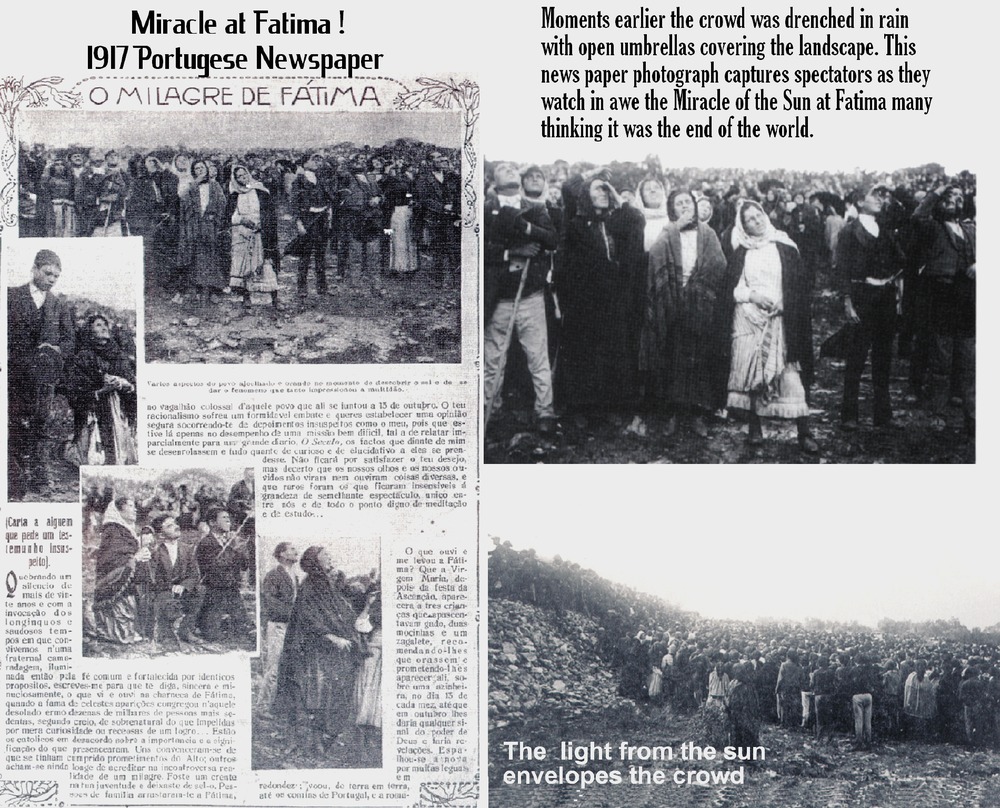 The following is allegedly a genuine picture of the swirling sun, though in very low resolution and took from a newspaper: 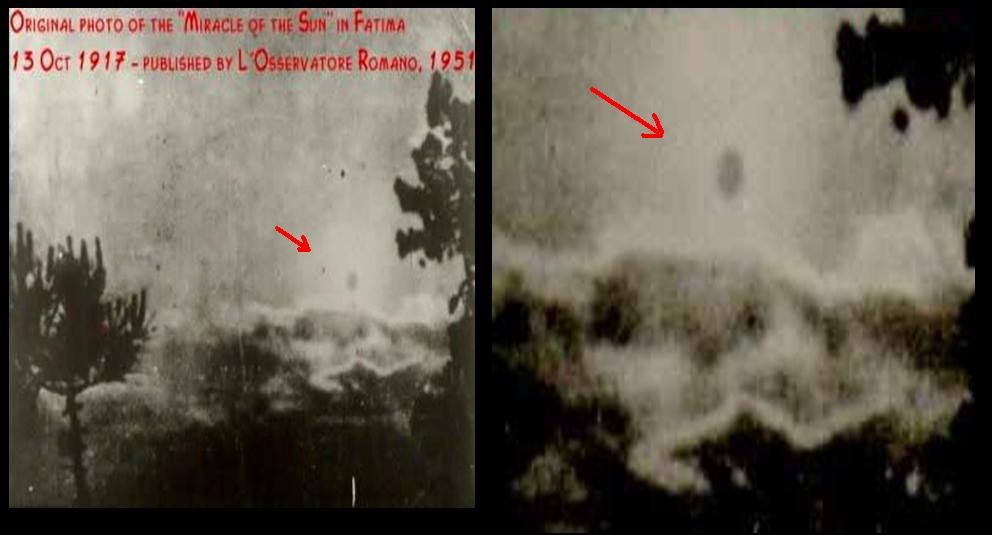 And the following is a graphic representation of what the swirling sun might have looked like in real life: 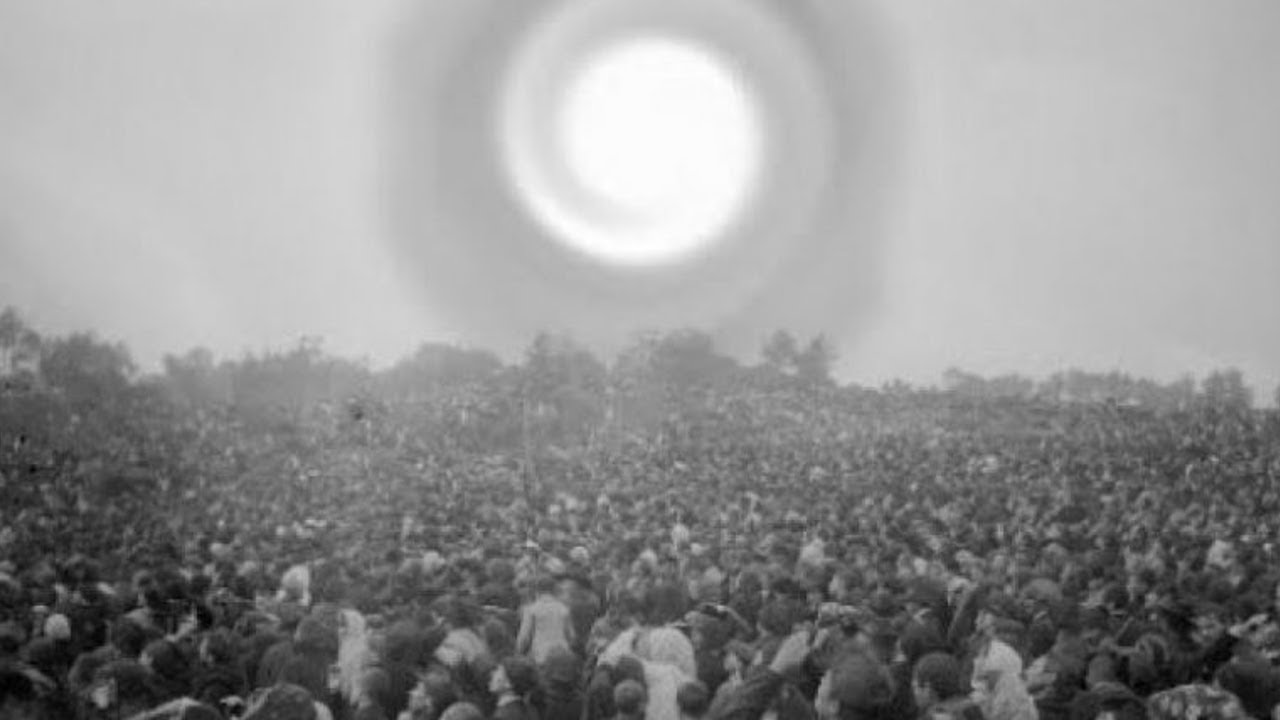 A newspaper in Lisbon described what happened:

“Before the astonished eyes of the crowd, whose aspect was biblical as they stood bareheaded, eagerly searching the sky, the sun trembled, made sudden incredible movements outside all cosmic laws — the sun ‘danced’ according to the typical expression of the people.”

Another secular newspaper in Lisbon described it like this:

“The silver sun … was seen to whirl and turn in the circle of broken clouds. A cry went up from every mouth and the people fell on their knees on the muddy ground. … The light turned a beautiful blue as if it had come through the stained-glass windows of a cathedral and spread itself over the people who knelt with outstretched hands.

“The blue faded slowly and then the light seemed to pass through yellow glass. … People wept and prayed with uncovered heads in the presence of the miracle they had awaited. The seconds seemed like hours, so vivid were they.”

A young lawyer named José Almeida Garrett reported on what he saw as well:

“The sun’s disc did not remain immobile. This was not the sparkling of a heavenly body for it spun round on itself in a mad whirl.

“Then, suddenly, one heard a clamor, a cry of anguish breaking from all the people. The sun, whirling wildly, seemed to loosen itself from the firmament and advance threateningly upon the earth as if to crush us with its huge and fiery weight.”

“Looking at the sun, I noticed that everything was becoming darkened. I looked first at the nearest objects and then extended my glance further afield as far as the horizon.

“I saw everything had assumed an amethyst color. Objects around me, the sky and the atmosphere, were of the same color. Everything both near and far had changed, taking on the color of old yellow damask.”

The soggy field inexplicably dried out quickly. The soaked spectators clothing was somehow dry to the touch from the warmth generated by the strange light show. They reported feeling the heat of the sun as it approached them.

There were also reports that a mysterious substance called angel hair fell on the crowd, and even that the substance appeared to be a strange “unicellular organism” in a lab.

The angel hair fell again in November 2014, and a local observer told Metro that the strange substance, which disappears if touched, was analyzed and found to react to UV light, coming “alive.”

There are some reports that the original description of what the children saw was not the Virgin Mary but an alien apparition they called the “Little Woman” or the “Little Lady,” standing 3’7″ tall.

According to Ancient Origins, when the children asked the apparition where she was from, she pointed to the sky but made no mention of Heaven.

The apparition’s mouth never moved, but her words were transmitted through vibrations, a “buzzing sound that rang around them.” Lucia could hear her telepathically.

The apparition was not the average height of a human being, and in the first drawings of her by Lucia, she did not appear completely human.

“Another physical attribute that was changed by the Catholic Church was that the being was said to be less than three feet tall, and appeared to be bald.

“Over the course of interrogations and revisions, the children changed this appearance to that of a tall beautiful lady, more fitting to the Virgin Mary archetype of the church.”

Sketch of the Being of Fátima, 1917 aliens? pic.twitter.com/tu2JZkOPgV

In the book, “Heavenly Lights, The Apparitions of Fátima and the UFO Phenomenon” by Portuguese historians, interviews with the children shortly after the Miracle of the Sun suggested the apparition was between 12 and 15 years old in appearance, made no facial movements, and carried a luminous ball at her waist.

She would arrive from above and then rise into the sky and slowly disappear.

Two months before the Fátima events took place, a group of Portuguese spiritualists decided to take out ads in the local newspaper, Diario de Noticias.

The ads predicted that May 13th would be a “day of great happiness” and one which “the brilliant light of the “Morning Star” will illuminate the path.”

The two younger children would die just two years later due to the Spanish flu epidemic that hit Fátima shortly after the apparition’s appearances. The apparition had predicted their early deaths.

Lucia carried on, later becoming a Carmelite nun and revealing the words of the apparition in her memoir, “Fatima in Lucia’s Own Words,” and also in a sealed envelope, which we’ll look at more in the second part of this article.

Following the news of what happened, some people were angered, thinking that it was all a hoax or a collective hallucination. After a small chapel was built at the site, they attempted to blow it up.

According to the Catholic Herald, the small tree survived the attack.

“Their opposition included an attempt to blow up the little chapel which had been built at the site of the apparitions in March 1922. Although the roof of the chapel was blown off, the tree where Our Lady appeared was undamaged.”

By 1930, the Catholic Church verified that what took place was “worthy of belief.”

The two children would become canonized and the mysterious words of the apparition of the Virgin Mary would predict important events in history.

There have been many explanations for what took place, including the phenomenon called pareidolia, known to psychologists.

It’s the tendency to see patterns in randomness.

Others suggest that people were simply staring at the sun and strained their eyes, but the fact that thousands saw the phenomena in unison is truly unexplainable.

In the next part of this story, we’ll examine in more detail the messages that Sister Lucia claimed that the Virgin Mary told her at Fatima, and in later visits.

See more about what happened, including earlier visitations by an “angel” before the appearance of the Virgin Mary, in the video below:

URGENT: New Documentary Proves Climate Engineering by Controlling the Weather (NOT “Global Warming”) is Destroying Life and the Planet (Immediate Danger FAR Greater than COVID-19) Previous post
Lawyers Are Suing the WHO for 'Misleading World Over COVID-19 Outbreak' Next post