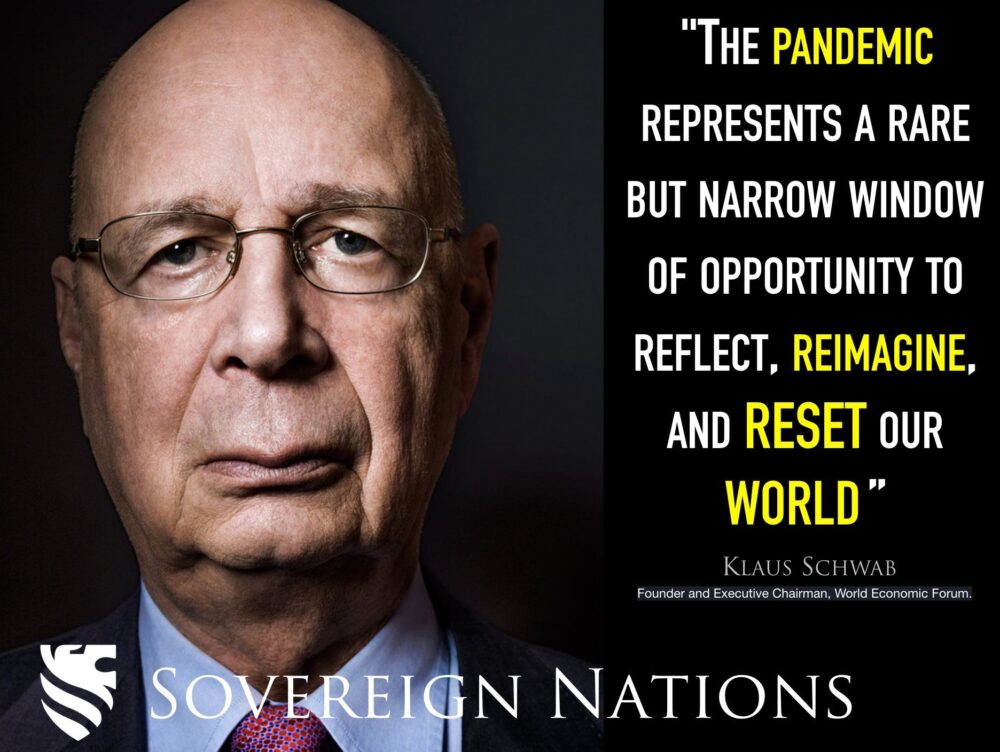 Bond Villain, Klaus Schwab, is Pushing the Internet of Bodies via the World Economic Forum (WEF)

The Internet of Bodies (IoB) hasn’t gotten as much attention as it needs to. It’s an outgrowth of the Internet of Things (IoT), a term that has been with us for several years now and which refers to the plan to embed every single thing on Earth with a sensor that allows it to be hooked up to the internet (using things like 5G and the Smart Grid) – and thus surveilled and monitored.

The IoT implies that every node on the grid will receive and broadcast transmissions. The Internet of Bodies takes the whole thing a dangerous step further by envisioning a world where these sensors are biosensors that sit on or in the human body, with the potential to thus make every individual nothing more than a node on the grid too. 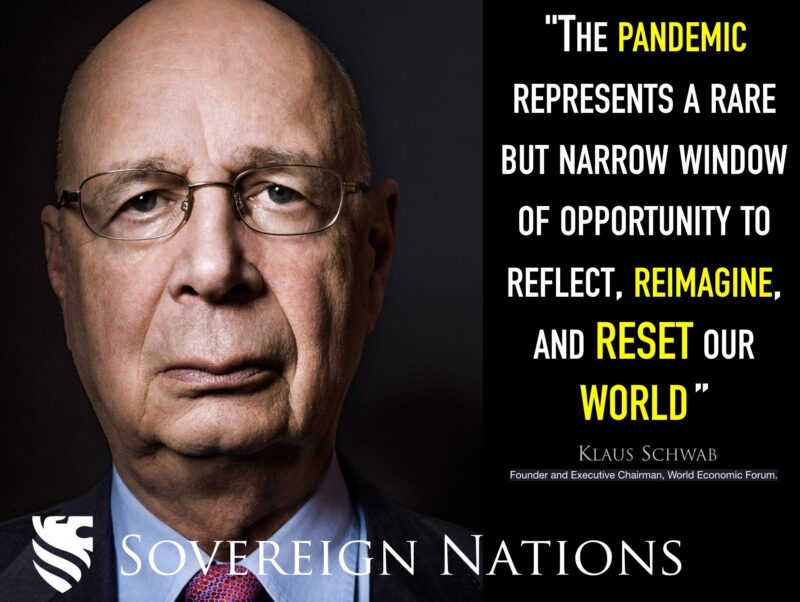 Head of the WEF (World Economic Forum) Klaus Schwab, who has become famous among alternative media reporters for his incredible likeness to an archetypal James Bond villain, proclaimed that his Great Reset (just another name for the New World Order or NWO) and his 4th Industrial Revolution (just another name for Transhumanism) would “lead to a fusion of our physical, digital and biological identity.”

The Internet of Bodies

There are several mainstream articles written in 2020 about the Internet of Bodies. This Forbes article defines it as follows:

There are three generations of Internet of Bodies that include:

· Body external: These are wearable devices such as Apple Watches or Fitbits that can monitor our health.

· Body internal: These include pacemakers, cochlear implants, and digital pills that go inside our bodies to monitor or control various aspects of our health.

· Body embedded: The third generation of the Internet of Bodies is embedded technology where technology and the human body are melded together and have a real-time connection to a remote machine.”

It spells out the agenda pretty clearly. The IoB agenda is the same thing as the human microchipping agenda, just more advanced due to the progression of technology.

I have been warning about things like ingestible, digital, Smart pills since at least 2012.

All of this is just the aspect of the Internet of Bodies where people are openly told what is happening and consent is manufactured, but there is another whole covert aspect I touched in my previous article (on the anti-human nature of the COVID agenda) where we have already been forcibly made to inhale and ingest nanoparticles without our knowledge and consent (see paragraph below on COVID and Transhumanism).

Also read: The Anti-Human Agenda Is The Core Of The New World Order

Meanwhile here is what the rather creepy RAND corporation has to say about the Internet of Bodies:

“Internet of Bodies technologies fall under the broader IoT umbrella. But as the name suggests, IoB devices introduce an even more intimate interplay between humans and gadgets.

“IoB devices monitor the human body, collect health metrics and other personal information, and transmit those data over the internet. Many devices, such as fitness trackers, are already in use … IoB devices already in use and those in development can track, record, and store users’ whereabouts, bodily functions, and what they see, hear, and even think.”

Given the central role of Schwab and the WEF in pushing the NWO Great Reset, it is also unsurprising that the WEF was pushing the Internet of Bodies in 2020.

One post written in June 2020 is entitled The Internet of Bodies is here. This is how it could change our lives. Another one is a research paper entitled Shaping the Future of the Internet of Bodies: New challenges of technology governance that goes into great depth about how the IoB would work, talking about “data-enabled social benefits” and analyzing how governance and laws would need to change to make the IoB legally feasible.

To be fair, the WEF paper does analyze the risks and the downside, but it’s pretty clear it’s promoting this as humanity’s future and is simply trying to figure out how to make it legally and socially acceptable for all the nations of the world. 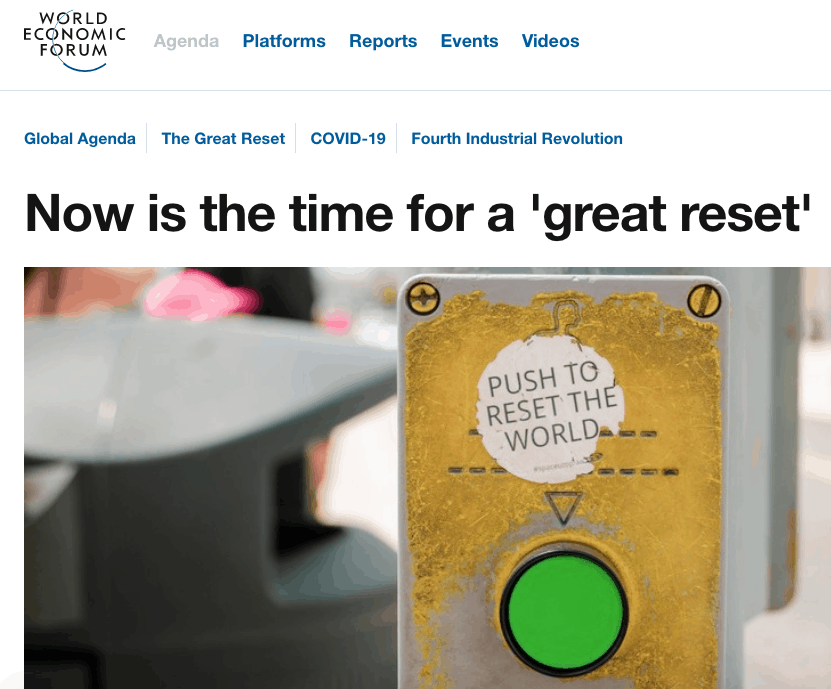 With over a year having passed since the advent of COVID-19 in the West, it is now abundantly clear that the coronavirus was never a medical emergency. It was just the convenient excuse and the catalyst for the NWO Great Reset.

It always was, as Schwab himself declared, “a rare but narrow window of opportunity to reflect, reimagine, and reset our world.” Notice how the words used here and elsewhere – reflect, reshape, reimagine and reset – are suggestive of the Freemasonic motto “ordo ab chao” or “order out of chaos”, which describes the method of destruction, of breaking people down, in order to make way for the new creation.

The NWO controllers want to remake you in their image, as a synthetic worker-slave on their digital Smart Network. This is why they are trying desperately to get at your genetics.

The next battleground is inside your body – your DNA. Whether it’s toxic GMO food or toxic gene-editing ‘jjabs’, it’s vital to realize that your genes are being targeted.

The nanotech and nanobot invasion is well underway. If you allow your genes to be altered via embedded nanotechnology, it could affect you in at least 4 key ways: firstly, it will shut you off from your connection to God, a Creator or a higher spiritual source (depending upon your beliefs); secondly, your perceptive range will be reduced (thus making you more docile and less aware of the conspiracy); thirdly, it will reduce your capacity to access and utilize your higher abilities; and fourthly, it will allow you to be directly programmed via transmissions beamed directly to the nanotech inside of you, representing a new horrible kind of mind control never before known in human history.

The COVID op has many connections to the Internet of Bodies or transhumanism. Here are just some examples:

– COVID nasal swab tests: this invasive test involves sticking a cotton swab of about 6 inches way up inside your nose so that it hits the back of your throat. It touches a part of your skull there known as the cribriform plate, with direct access to your brain.

Is there an ulterior purpose to these tests? Why not just take a saliva or blood sample which is less invasive? It would be easy for those administering these tests to implant nanoparticles in your body and brain via this method;

– COVID mRNA non-jjabs: the COVID jjab is definitely not what you think. There are many COVID jjabs on the market, but 2 Big Pharma companies – Pfizer and Moderna – have constructed a new kind of jjab called an mRNA (messenger RNA) jjab.

Actually, that’s not completely true; what they have made does not fit the medical and legal definition of a jjab. It does not stop transmission, it does not protect you against moderate or severe COVID symptoms and it does not directly elicit an immune response via a weakened virus. These mRNA ‘jjabs’ are gene therapy or gene editing tools! They literally re-program your genes to produce antibodies.

In other words, they are operating systems and chemical devices – not jjabs – that alter your DNA and RNA by genetically modifying you.

Additionally, there is information that some of these non-jjabs may contain substances like luciferase and hydrogel which are biosensors.

The Great Reset and Augmented Reality

You may have heard about AR (Augmented Reality) which is defined as “an interactive experience of a real-world environment where the objects that reside in the real world are enhanced by digital or computer-generated perceptual information” or in other words, the overlaying of the digital world on top of the physical world.

The scheme is to overlay our entire physical reality with digital sensors (just as Schwab stated) and particles, to turn everything and everyone into nodes on the Smart Grid that can be monitored, traced, tracked and controlled.

The CIA ran the data-harvesting operation a few years back in 2016 known as Pokemon Go which is a basic, introductory version of what is to come.

The plan also involves transforming all paper money into digital currency, and handing over control of it to a centralized World Government that would have the power to allocate it directly to people – via bodily implants.

There would be a social credit system (as in China currently) where all citizens are ranked according to how obedient and compliant they are. If someone doesn’t behave as a ‘good citizen’ their social credit, freedom, rights and even their access to their own (now digital) money could simply be turned off.

The WEF proposed in a recent article that by 2030, you, as an average world citizen, “will own nothing and have no privacy … but you’ll be happy” however due to negative attention they changed the title and wording.

Meanwhile, the oligarchs have been rapidly consolidating their wealth since COVID, hoping that people will fall for their rather obvious brainwashing attempts to embrace poverty and be fine with it. 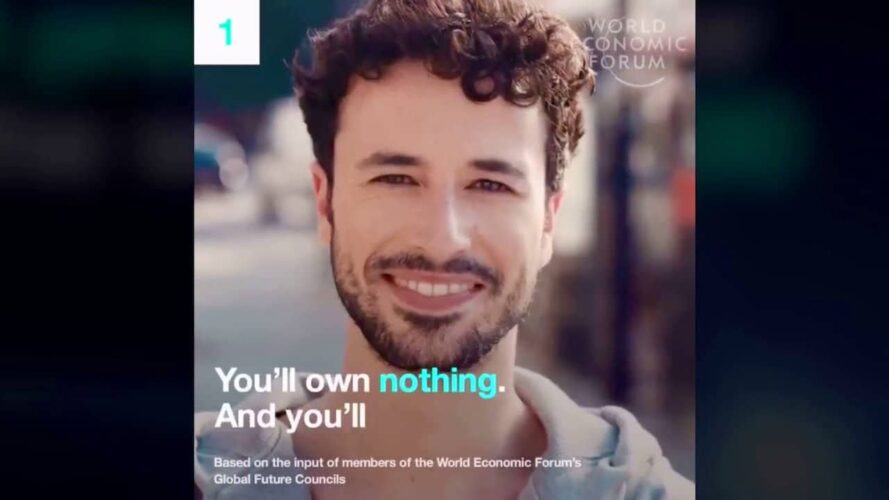 Final Thoughts: Watch Out for the Biosensors of the Internet of Bodies

The Great Reset is just another phrase for the New World Order. When the sensors of the IoT become the biosensors of the IoB, you will know the agenda has advanced rapidly to the point where mass enslavement is becoming a reality.

The evil NWO agenda is not written in stone. It can be stopped. However, that starts with you standing in your power and in your inherent, god-given, unalienable, sovereign rights. You must claim your right to bodily autonomy by refusing to consent to anything forced on or in your body.

You must fully claim your right to breathe oxygen in an unobstructed and unrestricted manner. Don’t be lulled into becoming a human guinea pig for Big Pharma by taking a non-jjab that will alter your genes forever.

Remember, as this article states, that “the lure of Utopia has many hooks” as people are enticed to give up “privacy and freedom for the common good.”