Lockdown One Year On – It Doesn’t Work, it Never Worked & it Wasn’t Supposed to Work

Light up the lone candle on the saddest birthday cake in the world! The most destructive public policy of the century is growing up and doesn’t look like slowing down.

And so we come to March 23rd, and lockdown’s first birthday. Or, as we call it here, the longest two weeks in history.

It’s a long time since “2 weeks to flatten the curve”, became an obvious lie. Sometime in July it turned into a sick joke. The curve was flattened, the NHS protected and the clapping was hearty and meaningful.

… and none of it made any difference.

This was not a sacrifice for the “greater good”. It was not a hard decision with arguments on both sides. It was not a risk-benefit scenario. The “risks” were in fact certainties, and the “benefits” entirely fictional.

Because Lockdowns don’t work. It’s really important to remember that.

Even if you subscribe to the belief that “Sars-Cov-2” is a unique discrete entity (which is far from proven), or that it is incredibly dangerous (which is demonstrably untrue), the lockdown has not worked to, in any way, limit this supposed threat.

They don’t make any difference, the curves don’t flatten and the R0 number doesn’t drop and the lives aren’t saved (quite the opposite, as we’ve all seen).

Just look at the graphs.

This one, comparing “Covid deaths” in the UK (lockdown) and Sweden (no lockdown): 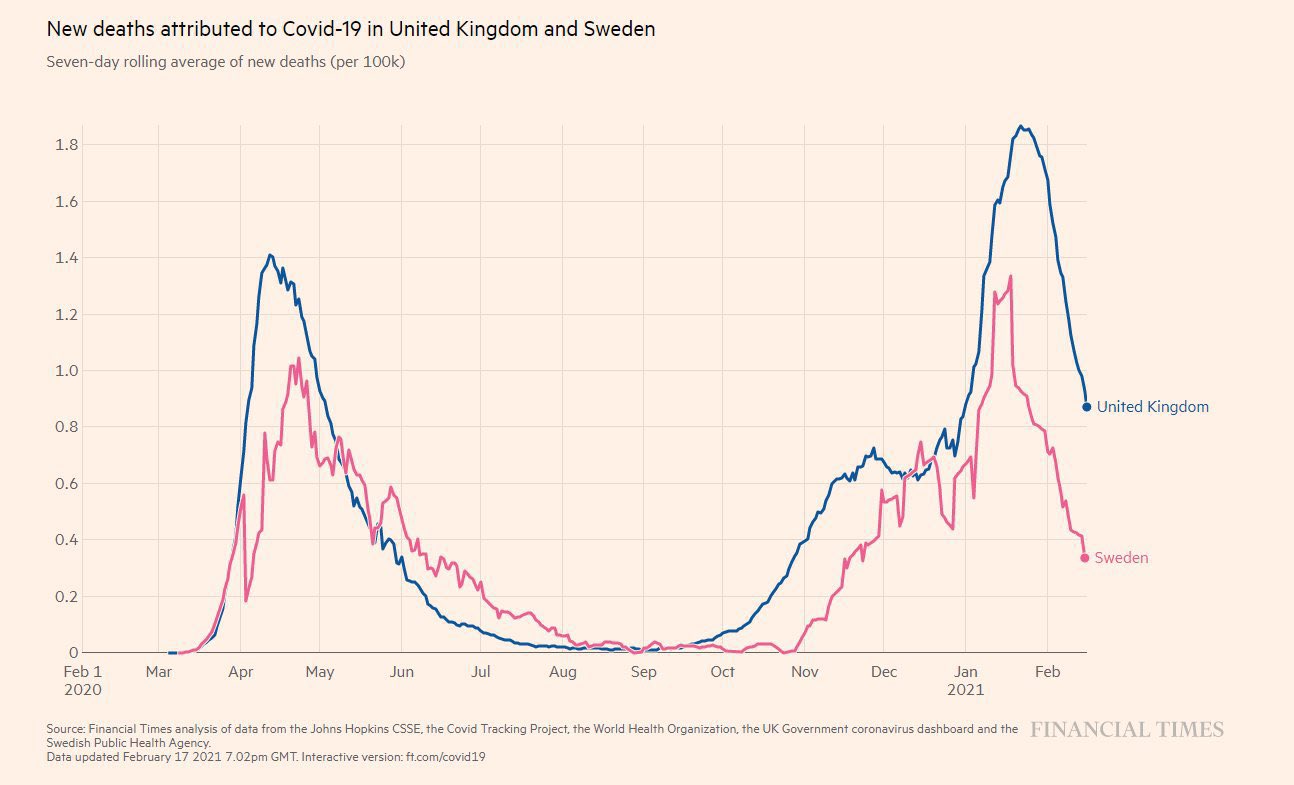 Or this one, comparing “Covid deaths” in California (lockdown) and Florida (no lockdown): 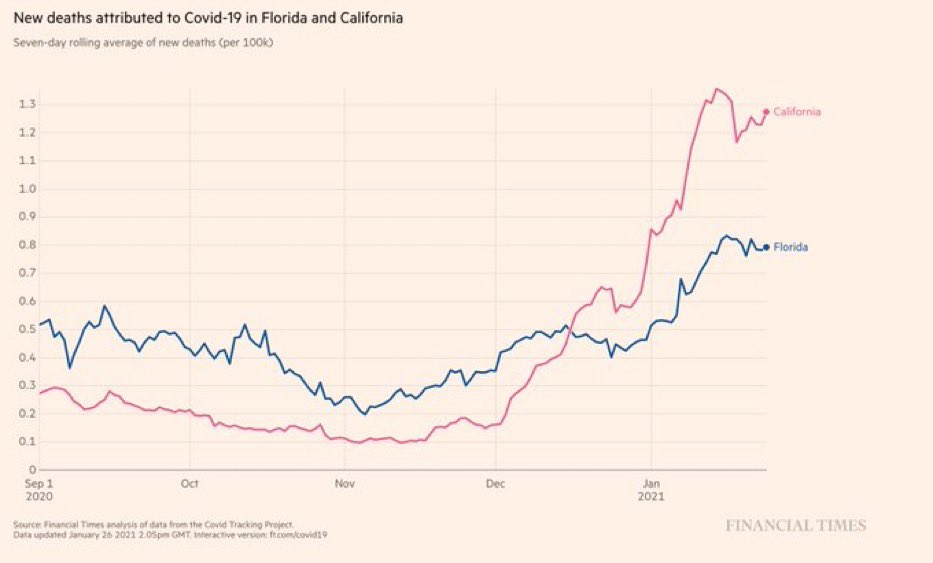 From Belarus to Sweden to Florida to Nicaragua to Tanzania, the evidence is clear. “Covid”, whatever that means in real terms, is not impacted by lockdowns.

The damage done by shuttering businesses, limiting access to healthcare, postponing treatments and diagnoses, postponed surgeries, increasing depression, soaring unemployment and mass poverty [and a “famine of Biblical proportions“] have been discussed to death. The scale of the impact cannot be overstated.

“We in the World Health Organization do not advocate lockdowns as the primary means of control of the virus […] just look at what’s happened to the tourism industry… look what’s happening to small-holding farmers […] it seems we may have a doubling of world poverty by next year. We may well have at least a doubling of child malnutrition […] This is a terrible, ghastly global catastrophe.”

A terrible, global catastrophe. A doubling of childhood malnutrition. The “pandemic” didn’t do that, lockdowns did that.

Too often soft language in the media talks about “misjudgments” or “mistakes” or “incompetence”. Supposed critics claim the government “panicked” or “over-reacted”. That is nonsense. The easiest, cheesiest excuse that has ever existed.

“Whoops”, they say, with an emphatic shrug and shit-eating grin “I guess we done messed up!”. Unflattering, but better than the truth.

Because the truth is that the government isn’t mistaken or scared or stupid… they are malign. And dishonest. And cruel.

All the suffering of lockdown was entirely predictable and deliberately imposed. For reasons that have nothing to do with helping people and everything to do controlling them.

It’s been more than apparent for most of the last fifty-two weeks that the agenda of lockdown was not public health, but laying the groundwork for the “new normal” and “the great reset”.

A series of programmes designed to completely undercut civil liberties all across the world, reversing decades (if not centuries) of social progress.

A re-feudalisation of society, with the 99% cheerfully taking up their peasant smocks “to protect the vulnerable”, whilst the elite proselytise about the worth of rules they happily admit do not apply to them.

And we’ve all had lives ruined and a year of precious time wasted. For nothing. You’ve been locked up for two weeks that lasted 365 days. For nothing.

…or rather, for everything. Because that’s what they are trying to take from us. Everything. And the only way to stop them is not to let them. To simply refuse consent.

Let’s not let lockdown get a second birthday.

Tulli Papyrus: An Ancient Document That Reveals Flying ‘Fiery Disks’ Described by a Pharaoh Previous post
CDC Pretending That NOBODY is Getting Injured or Killed from COVID-19 Vaccines Next post