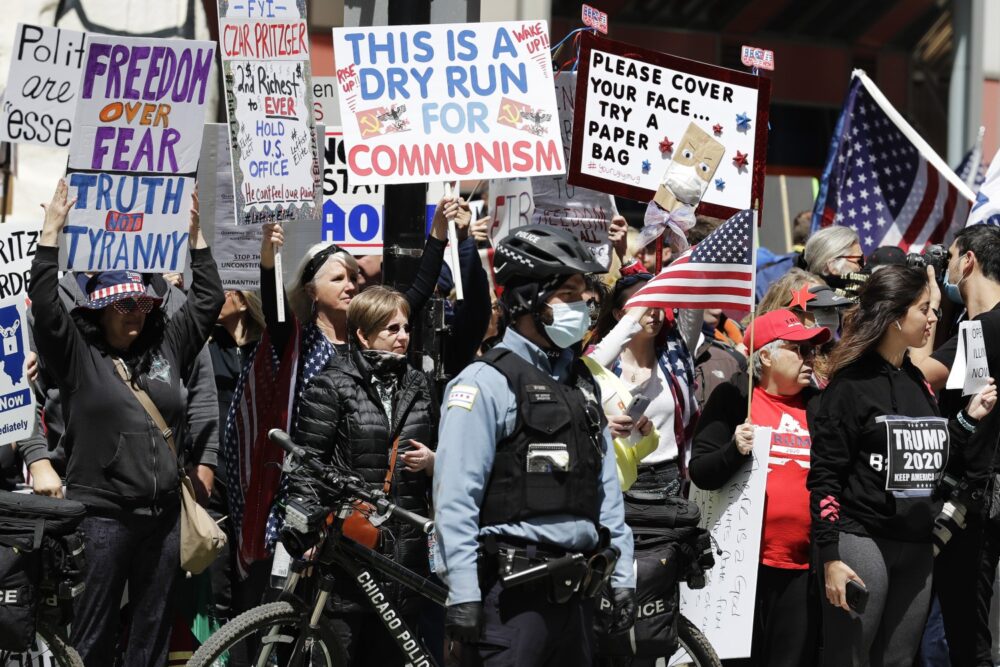 Protest Laws All Across America Undermine the First Amendment

“If freedom of speech is taken away, then dumb and silent we may be led, like sheep to the slaughter.” — George Washington

It’s a given that the government is corrupt, unaccountable, and has exceeded its authority. 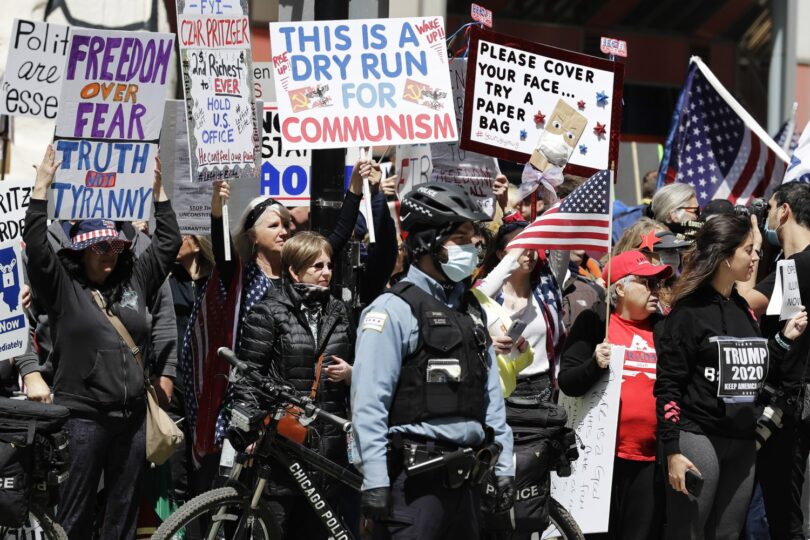 So what can we do about it?

The first remedy involves speech (protest, assembly, speech, prayer, and publicity), and lots of it, in order to speak truth to power.

The First Amendment, which is the cornerstone of the Bill of Rights, affirms the right of “we the people” to pray freely about our grievances regarding the government. We can gather together peacefully to protest those grievances. We can publicize those grievances. And we can express our displeasure (peacefully) in word and deed.

Unfortunately, tyrants don’t like people who speak truth to power. 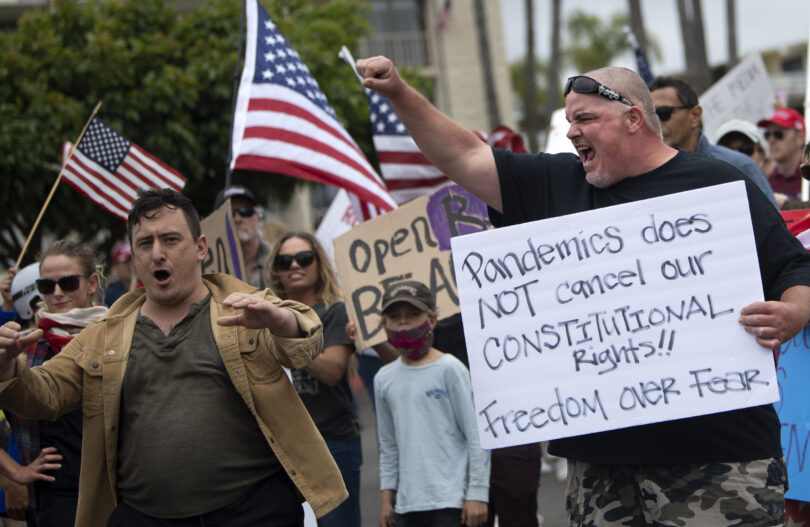 The American Police State has shown itself to be particularly intolerant of free speech activities that challenge its authority, stand up to its power grabs, and force it to operate according to the rules of the Constitution.

These protest laws, some of which appear to encourage violence against peaceful protesters by providing immunity to individuals who drive their car into protesters impeding traffic and use preemptive deadly force against protesters who might be involved in a riot, take intolerance for speech with which one might disagree to a whole new level.

Ever since the Capitol protests on Jan. 6, 2021, state legislatures have introduced a broad array of these laws aimed at criminalizing protest activities.

Yet while the growing numbers of protest laws cropping up across the country are being marketed as necessary to protect private property, public roads or national security, they are a wolf in sheep’s clothing, a thinly disguised plot to discourage anyone from challenging government authority at the expense of our First Amendment rights.

However, as Human Rights Watch points out, these assaults on free speech are nothing new.

“Various states have long-tried to curtail the right to protest. They do so by legislating wide definitions of what constitutes an ‘unlawful assembly’ or a ‘riot’ as well as increasing punishments. They also allow police to use catch-all public offenses, such as trespassing, obstructing traffic, or disrupting the peace, as a pretext for ordering dispersals, using force, and making arrests. Finally, they make it easier for corporations and others to bring lawsuits against protest organizers.”

Make no mistake: while many of these laws claim to be in the interest of “public safety and limiting economic damage,” these legislative attempts to redefine and criminalize speech are a backdoor attempt to rewrite the Constitution and render the First Amendment’s robust safeguards null and void.

For instance, there are at least 205 proposed laws being considered in 45 states that would curtail the right to peacefully assemble and protest by expanding the definition of rioting, heightening penalties for existing offenses, or creating new crimes associated with assembly.

In Alabama, lawmakers are pushing to allow individuals to use deadly force near a riot. Kentucky, Missouri and New Hampshire are also considering similar stand your ground laws to justify the use of lethal force in relation to riots.

In Arizona, legislators want to classify protests involving seven or more people as felonies punishable by up to two years in jail. Under such a law, traditional, nonviolent forms of civil disobedience — sit-ins, boycotts and marches — would be illegal.

In Arkansas, peaceful protesters who engage in civil disobedience by occupying any government property after being told to leave could face six months in jail and a $1000 fine.

In Minnesota, where activists continue to protest the death of George Floyd, who was killed after police knelt on his neck for eight minutes, individuals who are found guilty of any kind of offense in connection with a peaceful protest could be denied a range of benefits, including food assistance, education loans and grants, and unemployment assistance.

Oregon lawmakers wanted to “require public community colleges and universities to expel any student convicted of participating in a violent riot.” In Illinois, students who twice infringe the rights of others to engage in expressive activities could be suspended for at least a year.

Proposed laws in at least 25 states, including Oklahoma, Mississippi, and Florida, would give drivers the green light to “accidentally” run over protesters who are preventing them from fleeing a riot. Washington wants to levy steeper penalties against protesters who “swarm” a vehicle, punishing them for a repeat offense with up to 40 years in prison and a $100,000 fine.

Responding to protests over the Keystone Pipeline, South Dakota enabled its governor and sheriffs to prohibit gatherings of 20 or more people on public land if the gathering might damage the land. At least 15 other states have also adopted or are considering legislation that would levy harsher penalties for environmental protests near oil and gas pipelines.

In Iowa, all it takes is for one person in a group of three of more people to use force or cause property damage, and the whole group can be punished with up to 5 years in prison and a $7,500 fine.

Obstruct access to critical infrastructure in Mississippi and you could be facing a $10,000 fine and a seven-year prison sentence.

A North Carolina law would have made it a crime to heckle state officials. Under this law, shouting at a former governor would constitute a crime.

In Connecticut, you could be sentenced to five years behind bars and a $5,000 fine for disrupting the state legislature by making noise or using disturbing language.

Indiana lawmakers wanted to authorize police to use “any means necessary” to breakup mass gatherings that block traffic. Lawmakers have since focused their efforts on expanding the definition of a “riot” and punishing anyone who wears a mask to a peaceful protest, even a medical mask, with 2.5 years in prison and a $10,000 fine.

Georgia wants to ban all spontaneous, First Amendment-protected assemblies and deny anyone convicted of violating the ban from receiving state or local employment benefits.

Virginia wants to subject protesters who engage in an “unlawful assembly” after “having been lawfully warned to disperse” with up to a year of jail time and a fine of up to $2,500.

Missouri made it illegal for public employees to take part in strikes and picketing, only to have the law ruled unconstitutional in its entirety.

Oklahoma created a sliding scale for protesters whose actions impact or impede critical infrastructure (including a telephone pole). The penalties range from $1,000 and six months in a county jail to $100,000 and up to 10 years in prison. And if you’re part of an organization, that fine goes as high as $1,000,000.

Ask yourself: if there are already laws on the books in all of the states that address criminal or illegal behavior such as blocking public roadways, trespassing on private property or vandalizing property — because such laws are already on the books — then why does the government need to pass laws criminalizing activities that are already outlawed?

No matter what the politicians might say, the government doesn’t care about our rights, our welfare or our safety.

Every despotic measure used to control us and make us cower and comply with the government’s dictates has been packaged as being for our benefit, while in truth benefiting only those who stand to profit, financially or otherwise, from the government’s transformation of the citizenry into a criminal class.

In this way, the government conspires to corrode our core freedoms purportedly for our own good but really for its own benefit.

Remember, the USA Patriot Act didn’t make us safer. It simply turned American citizens into suspects and, in the process, gave rise to an entire industry — private and governmental — whose profit depends on its ability to undermine our Fourth Amendment rights.

In much the same way that the Patriot Act was used as a front to advance the surveillance state, allowing the government to establish a far-reaching domestic spying program that turned every American citizen into a criminal suspect, the government’s anti-extremism program criminalizes otherwise lawful, nonviolent activities such as peaceful protesting.

Clearly, freedom no longer means what it once did.

Not only do we no longer have dominion over our bodies, our families, our property and our lives, but the government continues to chip away at what few rights we still have to speak freely and think for ourselves.

Yet the unspoken freedom enshrined in the First Amendment is the right to think freely and openly debate issues without being muzzled or treated like a criminal.

What we have instead is regulated, controlled speech, and that’s what those who founded America called tyranny.

On paper, we may be technically free.

In reality, however, we are only as free as a government official may allow.

“Rights aren’t rights if someone can take them away. They’re privileges. That’s all we’ve ever had in this country, is a bill of temporary privileges. And if you read the news even badly, you know that every year the list gets shorter and shorter.

“Sooner or later, the people in this country are gonna realize the government … doesn’t care about you, or your children, or your rights, or your welfare or your safety… It’s interested in its own power. That’s the only thing. Keeping it and expanding it wherever possible.”

In other words, we only think we live in a constitutional republic, governed by just laws created for our benefit.

As I make clear in my book Battlefield America: The War on the American People, we live in a dictatorship disguised as a democracy where all that we own, all that we earn, all that we say and do — our very lives — depends on the benevolence of government agents and corporate shareholders for whom profit and power will always trump principle.

And now the government is litigating and legislating its way into a new framework where the dictates of petty bureaucrats carry greater weight than the inalienable rights of the citizenry.

By constitutional attorney John W. Whitehead. He is the founder and president of The Rutherford Institute, and the author of Battlefield America: The War on the American People.

IBM, Who Once Powered Holocaust Computational Machines, is Now Backing VACCINE Tracking and Food Allowance Previous post
Nearly All Covid Masks Are Worthless as Virus Particles Are FIVE TIMES Smaller Than Holes in the Masks Next post