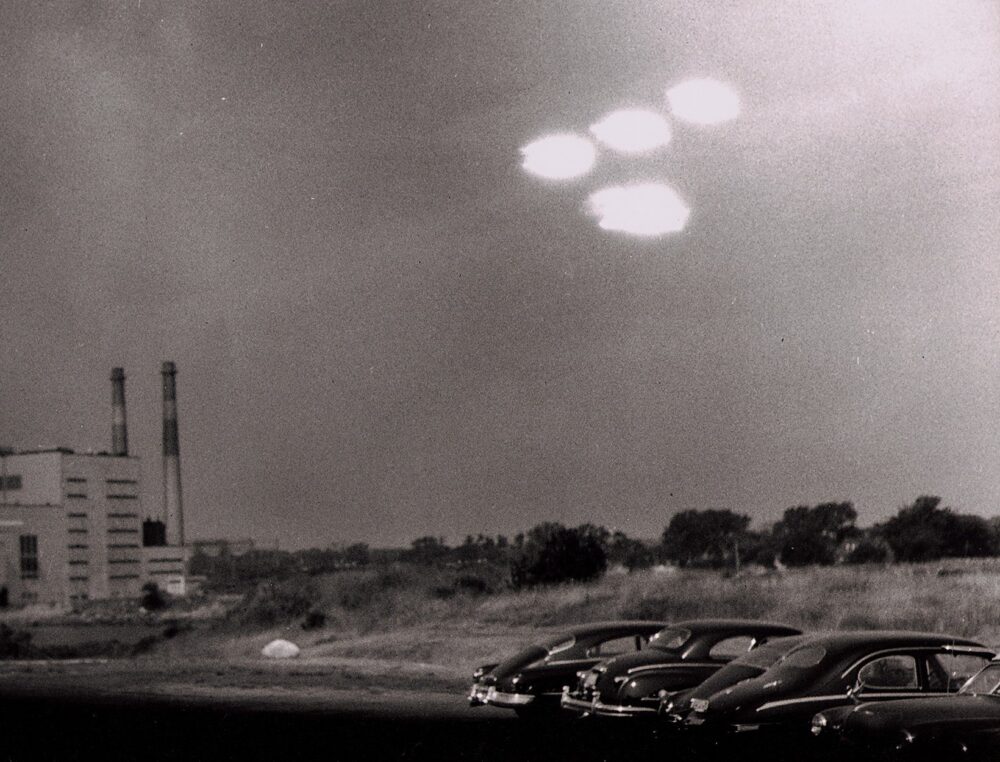 Many of you reading this are probably well aware of the fact that mainstream UFO disclosure is taking off, and has been taking off over the past couple of years.

Major media outlets like the New York Times and CNN have covered the topic with extreme legitimacy, and given the fact that much of the public relies on these outlets for information, they are now becoming aware of the fact that there are objects in our atmosphere performing maneuvers that no known man made piece of machinery can. 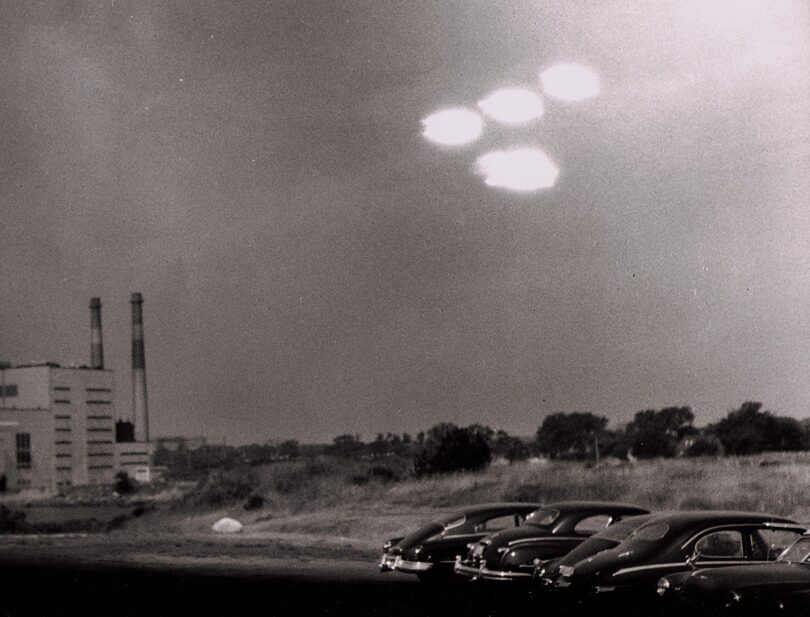 A picture above, taken through the window of a laboratory by a U.S. coastguard, shows four unidentified flying objects as bright lights in the sky, in Salem, Mass. on Aug. 3, 1952

This seems strange to many, however, every time we post an article, there is no shortage of comments stating that all of this is some sort of deception.

That either the global elite are staging sightings using some sort of advanced technology in order to prepare for some sort of false flag alien invasion, or that governments are working with malevolent extraterrestrials to do so, both options seem to be for the same purpose which would be to help usher in the “New World Order.” These are the claims.

If anything, based on my research these objects are very real, there is not much evidence that they represent a malevolent force, and that governments and mainstream media may twist our perception of the phenomenon to help bring about aspects of what some call “The New World Order.”

It includes the rollout of measures under the guise of goodwill to combat “problems” our world is facing.

Proponents of the New World Order theory believe that many of these problems, like climate change and COVID, are manufactured and/or used to justify more surveillance.

It also includes a digital world armed with more tracking, surveillance, and the acquisition of data from all citizens, as well as the rollout of various laws and reforms that continually lead us to a world where many of our rights and freedoms are stripped from us.

Again, all of this under the guise of goodwill and for “our protection.”

With the current COVID ‘crisis’, many believe “New World Order” has been replaced with “The Great Reset.”

Right now rights and freedoms that we once enjoyed are not accessible to many, and luxuries like travel and attending public entertainment venues may require a jjab. These, and many more are all aspects of this New World Order according to many.

There’s no doubt in my mind that issues like pandemics, climate change, geopolitical issues, and the “war on terror” have been used, perpetuated, and manufactured in some sense by those who wish to propose the solution that benefits them the most.

I do believe there has been, and continues to be, an ongoing push for a state of fear, a world of chaos that requires “big brother” to step in and give us a solution. That solution seems to be a world where yes, many of our rights and freedoms are taken away.

Where UFOs Come In

So what about the UFO phenomenon? Do I believe it’s being used to bring about a New World Order? To be honest, I am not quite sure. But just as I believe terrorism, COVID, geopolitical issues and much more are all being used by the political and financial elite to gain more profit and control over the human race, I do believe it’s a possibility.

I do not, however, believe the phenomenon is manufactured, and this is where critical thinking and discernment comes into play.

Unlike other issues like terrorism, climate change, and more, UFOs were ridiculed for decades and deemed a “conspiracy theory.”

The very first director of the Central Intelligence Agency, Roscoe Hillenkoetter, admitted to a long campaign of “ridicule and secrecy” behind the topic.

But you don’t need an admittance of ridicule. Anybody who has studied the UFO subject in-depth can easily see that the subject has been ridiculed and thrown into the conspiracy theory bucket for years.

So my question for all of those who believe this is some sort of fake deception is, why would so much time and resources be spent on ridiculing the subject in the past, claiming all leaks and footage of UFOs are fake, and that those who believe in them are nuts?

Why would they use mainstream media networks, famed talk shows, and more to completely ridicule the idea that these objects are real if they wanted to convince the entire population that they are indeed real?

It just doesn’t make any sense to me and it points to a more complex situation.

During these times, a number of researchers in the field, including myself, were well aware of the reality of the phenomenon despite this massive ridicule in the time where they were considered a “conspiracy theory.”

Big media and government using the term “conspiracy theory” has always been used to ridicule and silence dissenters of officially established opinion or “fact.”

Edward Snowden: ‘Be Careful Because Some Things That Are Termed A Conspiracy Are True’

The point is, not everything mainstream media presents is deception or fake. Take 9/11, for example, the buildings actually did collapse, that wasn’t fake. What seemed to be a potential deception was the perception and explanations given to us by mainstream media, and sure, the event itself may have been orchestrated by those who stood to benefit off of it – a topic we’ve inquired about in depth.

Another great example would be COVID jjabs, or jjabs in general, any conversation that paints jjabs in a questionable light is being deemed a “conspiracy theory” by many people, despite the fact that there are a number of scientists, doctors and peer-reviewed research that have raised cause for concern.

If this was some sort of holographic type of deception phenomenon, then why have UFOs been documented in antiquity for thousands of years? You can find a few examples here, but there are many.

When it comes to the UFO phenomenon, I do believe there are people out there, as with all other issues, that would like to use this phenomenon and shape the masses perception of it. I do believe there is a possibility to present the phenomenon as a threat, which is concerning given the fact that these objects do not represent this narrative at all. The U.S. Department of Defense’s “Unidentified Aerial Phenomena Task Force” even states the following:

“The Department of Defense established the UAPTF to improve its understanding of, and gain insight into, the nature and origins of UAPs (Unidentified Aerial Phenomenon). The mission of the task force is to detect, analyze and catalog UAPs that could potentially pose a threat to U.S. national security.”

Again, in no way do these objects represent a threat, and there is no reason to assume this. Granted, that doesn’t mean they don’t either.

THIS is where I believe the deception is, I think it’s quite irrational to assume that all of the UFO activity we see is some sort of fake deception.

This perspective lacks critical thinking and more importantly, lacks any evidence as well.

The idea that there are only malevolent beings working with governments to enslave humanity also goes against a wealth of information and data that’s been collected by researchers over the years.

It’s easy to read a book, like “Behold A Pale Horse” where one man makes a claim, but we mustn’t simply look at information that complies with what we believe.

This is a topic that is quite in-depth and requires a lot of examination.

Information has to be collected and synthesized amongst the collective, not made into a belief system.

This type of thinking is rampant in the alternative community which is in part why we put together a course of overcoming bias & improving critical thinking as we are in a time where we have to improve the way we discern information.

I think there’s one thing we can all agree on, and that’s the fact that mainstream media and government cannot be blindly trusted nor relied upon for any accurate information on a topic.

That doesn’t mean every single topic they address is fake. Government and mainstream media have largely become tools of perception manipulation, meaning a lot of the time they take real issues, events and phenomenon and attempt to paint the masses perception around it. It’s likely a mix of agenda and culture that drives this.

Within the “truth movement”, there is still an inability to decipher and have appropriate conversations about what is and what isn’t.

Many “conspiracies,” are and have been proven to be true, but at the same time “conspiracies within conspiracies” have developed without any appropriate sources or evidence to back them up.

A lot of the time with this subject, narratives are created out of thin air with absolutely no evidence at all to back them.

Speculation is OK and necessary, but we have to be careful pushing a narrative as truth, especially if we are trying to reach those “within” the mainstream.

We mustn’t forget the importance of evidence, or the ability to speculate based on a certain set of evidence and data or something to support our claims that goes beyond simple speculation.