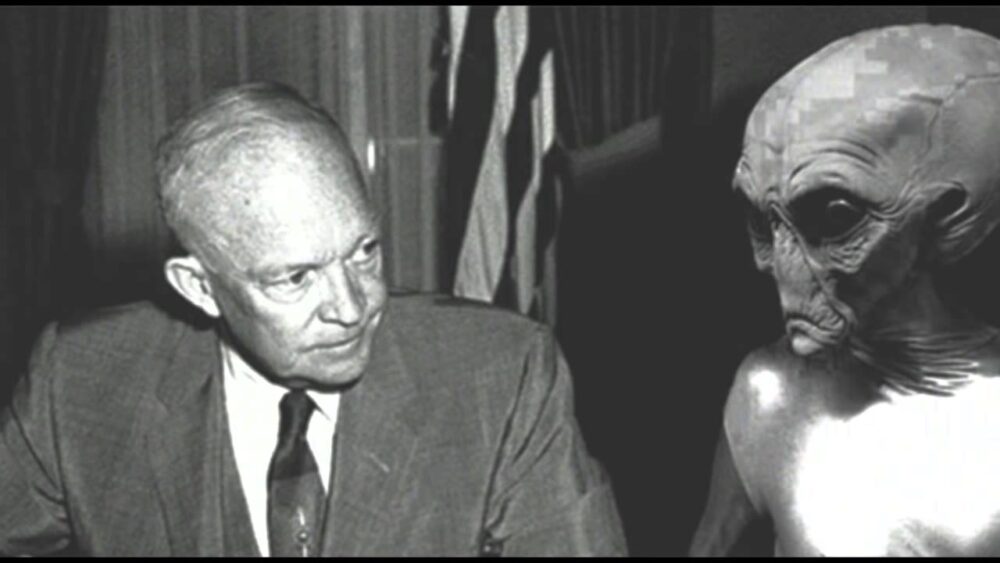 During the late hours of February 20-21 of 1954, while President Eisenhower was officially on vacations in California, the 34th president of the US went ‘missing’ and was supposedly taken to Edwards Air Force base for a secret meeting with otherworldly visitors. 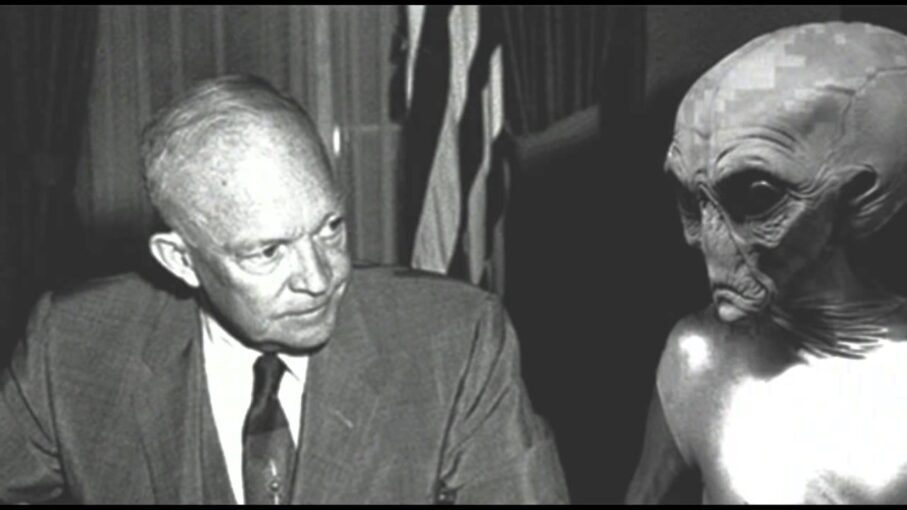 For years it is said that governments around the globe have been covering up the existence of alien life. For years thousands of UFO sightings have been dismissed as a global conspiracy.

However, everything could change when evidence is obtained.

A former Pentagon consultant (among others) claims that President Eisenhower had THREE secret meetings with three different alien species.

It is said that Former US President was taken to the Edwards Airforce base while he was listed as officially ‘missing.’

Lecturer and author Timothy Good state that the 34th president of the United States of America met with three extremely advanced alien species in New Mexico in 1954.

The alien meeting took place at the remote airbase, and they communicated using ‘telepathic messages.

According to Timothy Good, the alien meetings were witnessed by many people.

‘Aliens have made both formal and informal contact with thousands of people throughout the world from all walks of life,’ said Timothy Good.

‘I can tell you that in 1954, President Eisenhower had three encounters, set up meetings with aliens, which took place at certain Air Force bases including Holloman Air Force base in New Mexico.’

It is well known that President Eisenhower firmly believed in the existence of Aliens.

His otherworldly encounter took place while ‘officials’ were told the president was on vacation in Palm Springs, California in February of 1954.

President Eisenhower allegedly met alien visitors with a ‘Nordic’ Appearance but signed an otherworldly agreement with the Grey Aliens.

Another ‘whistleblower’ who commented on Eisenhower and his meeting with Aliens was Philip Schneider.

Philip Schneider was a geologist and structural engineer of the Government of the United States and was involved in the construction of deep underground military bases in the United States with the Army Corps of Engineers.

He was also one of three people to survive the 1979 firefight between the large Greys and U.S. intelligence and military forces at Dulce underground base.

At Dulce, Schneider maintained, “grey” humanoid extraterrestrials worked side by side with American technicians.

In 1954, former President Dwight Eisenhower made a pact with three species of aliens; Schneider said at a conference in 1995.

In exchange for alien technology, Eisenhower allegedly gave permission for the aliens to abduct a limited number of human beings to perform numerous experiments on Earth and in space.

According to Schneider, the technology that aliens gave us as part of this exchange includes a type of metal that is almost indestructible.

It is said that during the press conference in 1995, Schneider even presented the public with a piece of the mysterious ‘alien metal.’