The globalist billionaire has been working behind the scenes infecting radical left activism into major U.S. city power structures to collapse America. 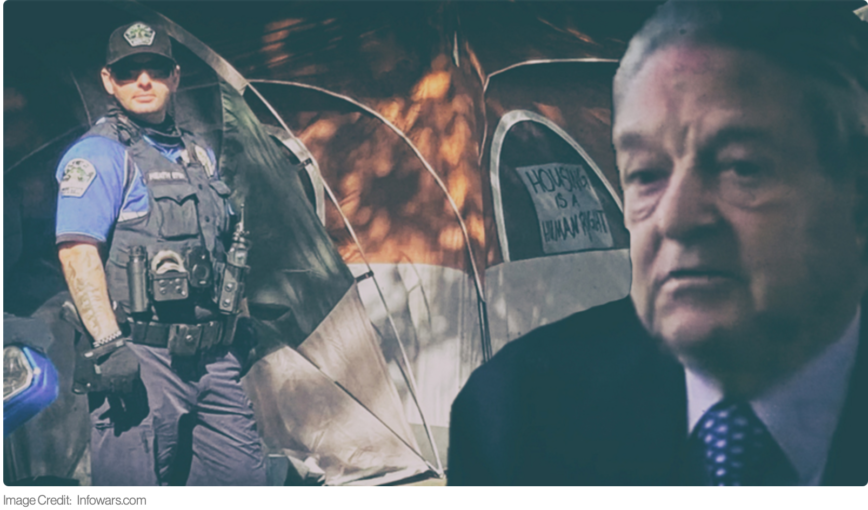 Back in May of 2021 Austin, Texas, voted on Proposition B which made it illegal for the growing number of homeless residents flocking to Austin to camp anywhere they please.

The vote was 57.13 percent in favor and 42.87 percent against, according to the Travis County Clerk’s office election data. The homeless had been promised permanent housing from the Council which never materialized even after millions were cut from much needed public safety and diverted towards housing the homeless.

When the day arrived for Proposition B to be enforced. The first area targeted was City Hall which had fallen under siege by what appeared to be the homeless. But that was an illusion.

I had been informed by the defunded Austin police department that they were well aware the people now shouting threats and racist diatribes in their faces weren’t homeless. The majority of them were activists.

The reality is that the liberal activist group Homes Not Handcuffs had organized the siege in protest of the will of Austin voters.

Supporting that protest was the majority of the absent City Council, and other wealthy Democrats hell bent on turning Texas blue — again manipulating the legitimate vote and will of the Austin voters.

And per usual, the local police would have to endure the task of playing the role of the bad guy while enforcing the people’s vote.

An organization where billionaires dump money into pseudo grassroots movements designed to throw a wrench in Federal, State, and local government foolish enough to allow the minions of their lies to fester.

ACT BLUE was once described in a Human Rights article as “…not driven by the average Democrat, as their image may suggest, but are rather mouthpieces for the radical agendas of the likes of Soros and labor unions.”

George Soros has been a controversial topic. His past is well known and his enemies are many. But after the media defended his public image, he fell off the radar, which gave Soros and those that would dismantle the United States enough time and cover to reinforce radical activism infesting major U.S. cities.

It became accepted common knowledge. Completely antithetical to the survival of our Republic. Yet accepted by U.S. politicians and ignored by the media as it grew.

A message to the fools surrounding City Hall: The majority of you aren’t even from Austin, much less Texas. Your blatant insult of the will of Texas voters masquerading as a “protest” has only infuriated the tax-paying residents of the City Of Austin, and your cover has been blown.

Child Trafficking? 'Elite' Pedophiles? Planes Carrying Unidentified Children Landing in Tennessee in the Middle of the Night Previous post
How Asymptomatic COVID Spread Used to Lockdown the World Was Based on a Lie Next post