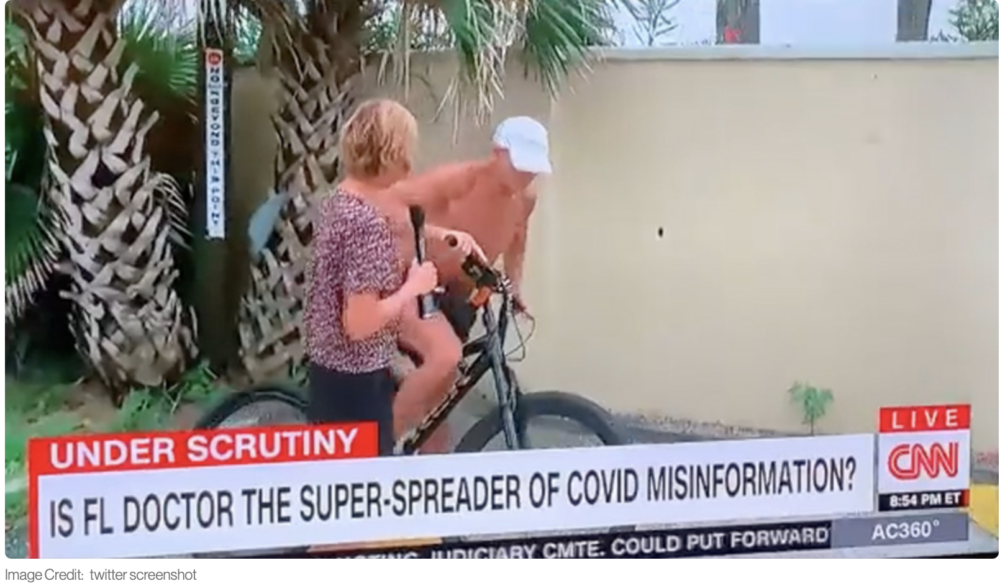 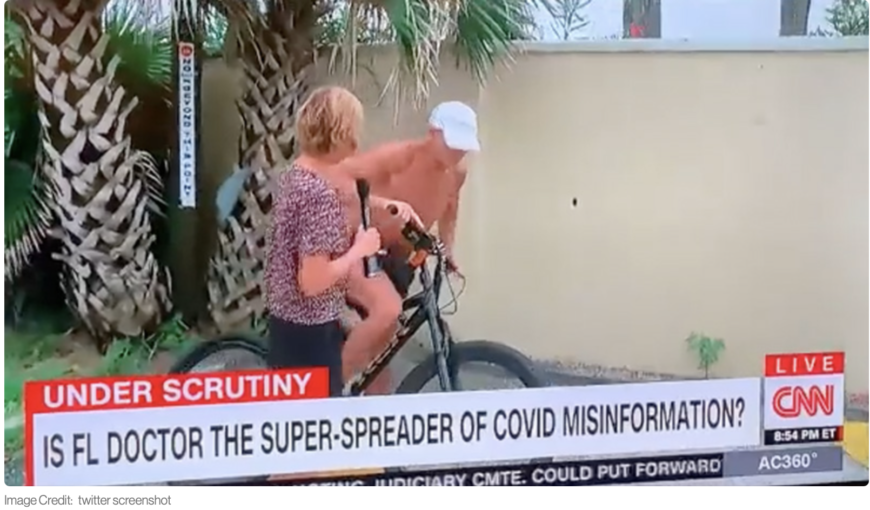 First, Kaye is seen walking into Mercola’s Fort Meyers, Florida office and asking employees if the doctor is available.

The CNN reporter said she wanted to ask the doctor about “misinformation” he’s spreading online, such as “masks may not work, jjabs could be dangerous and vitamins C and D can prevent or treat coronavirus.”

After being told Mercola was not at the office, Kaye traveled over 200 miles and showed up outside his house.

CNN cornered a doctor when he was shirtless to confront him over why he said masks “may not work” and that jjabs “may be dangerous.” Appalling. pic.twitter.com/X2ySSGhzzJ

After failing to reach Mercola at home, the CNN crew saw the doctor riding his bike nearby and followed him to engage in an ambush interview.

“How are you? I’m Randi Kaye with CNN. Can we ask you a couple questions?” the reporter queried.

She continued, “We just want to talk to you about jjabs and what you’ve been saying about them. Do you feel responsible for people who didn’t get vaccinated and possibly got sick and died because of what you told them about the jjab? What do you say to families who lost loved ones? Are you spreading misinformation? Why won’t you speak to us?”

As she asked question after question, Mercola calmly got back onto his bicycle and rode off without saying a word to the pesky reporter.

Dr. Mercola is labeled by the White House as a member of the “disinformation dozen,” which is a group of internet users allegedly responsible for 65% of anti-jjab on social media.

PSAKI: "There’s about 12 people who are producing 65% of anti-jjab misinformation on social media platforms."

On Tuesday, Dr. Mercola announced he will be deleting all content posted to his website 48 hours after its publication in order to avoid being persecuted by the Biden administration.

“These were the times when many of the views I presented were criticized, but that’s to be expected,” he explained.

“That was one of the great freedoms we enjoyed. We could have different views and we could speak openly about these views without fear of retribution.”

Dr. Mercola added, “But we are now in a different time. A much darker time. The silence of free speech is now deafening.”