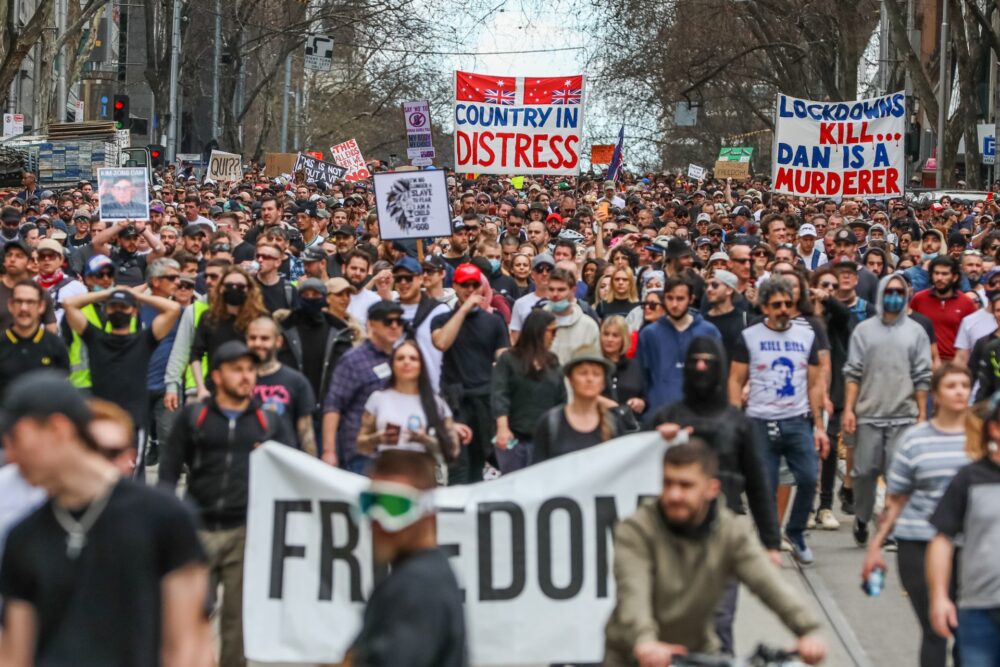 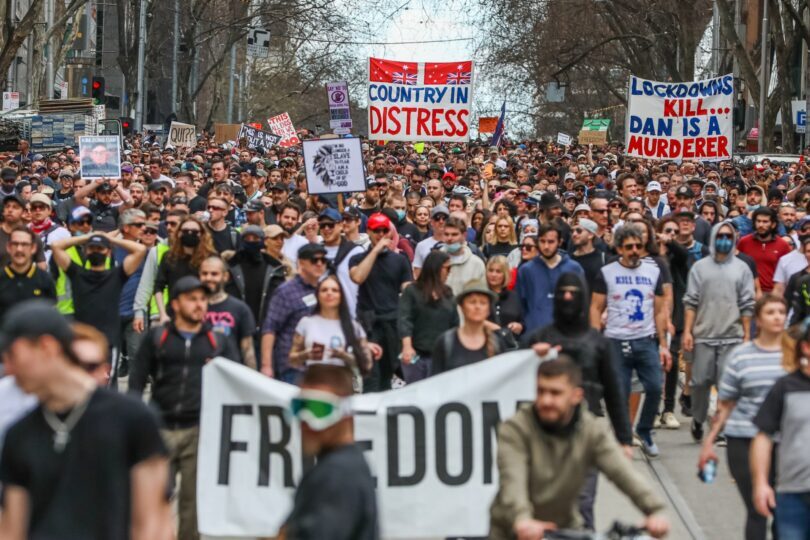 MELBOURNE, AUSTRALIA – AUGUST 21: Protesters are seen marching holding banners on August 21, 2021 in Melbourne, Australia. Anti-lockdown protesters gathered despite current COVID-19 restrictions prohibiting outdoor gatherings. Lockdown restrictions are currently in place across Melbourne as Victoria continues to record new cases of the highly infectious COVID-19 Delta variant. A curfew is also now in place from 9 p.m. to 5 a.m. each night across the metropolitan area. The restrictions are set to remain in place until 11.59 pm on Thursday, 2 September. (Photo by Getty Images)

Sydney’s state of New South Wales posted 825 infections — a record for the entire country — a day after authorities extended the city’s lockdown until at least September to try to head off the Delta variant.

“No matter how hard we work, no matter if 99 per cent of people are doing the right thing, there’s an element of Delta that nobody can control,” NSW Premier Gladys Berejiklian told media.

“The best way we can look forward to freedom is by making sure that we get vaccinated.”

An increasing outbreak in Melbourne’s state of Victoria also prompted stay-at-home orders to be extended across the entire state on Saturday.

But Melbourne’s public health orders didn’t deter thousands from venting anger in a march against the lockdown rules, with police using pepper spray in violent clashes with protesters.

Seven officers were injured and more than 200 people were arrested in the “violent and unlawful” protest, Victoria Police said in a statement.

“While there were some peaceful protestors in attendance, the majority of those who attended came with violence in mind,” they said. 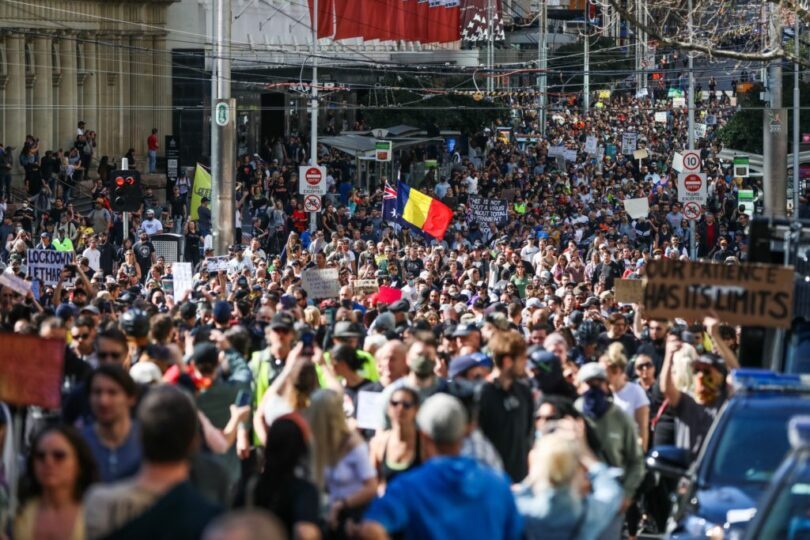 MELBOURNE, AUSTRALIA – AUGUST 21: A general view of protesters as they march on August 21, 2021 in Melbourne, Australia. (Photo by Getty Images) 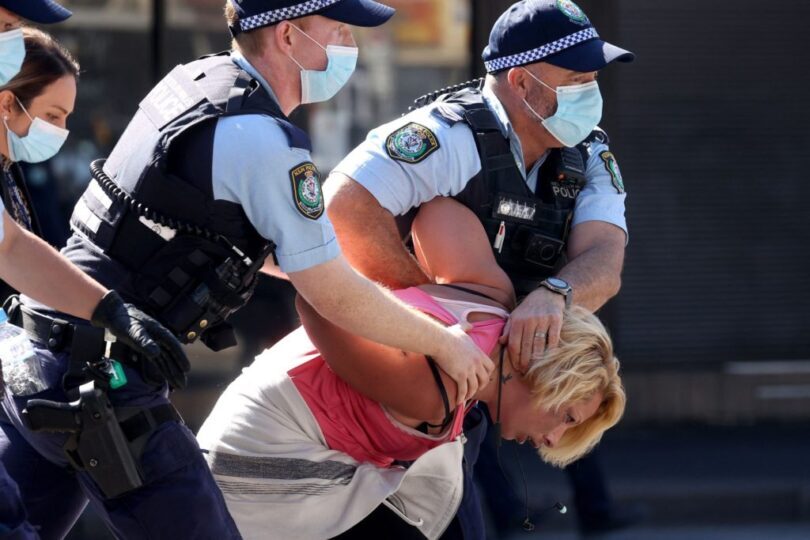 Police officers detain a protestor in Sydney on August 21, 2021, following calls for an anti-lockdown protest rally. (Photo by DAVID GRAY/AFP via Getty Images) 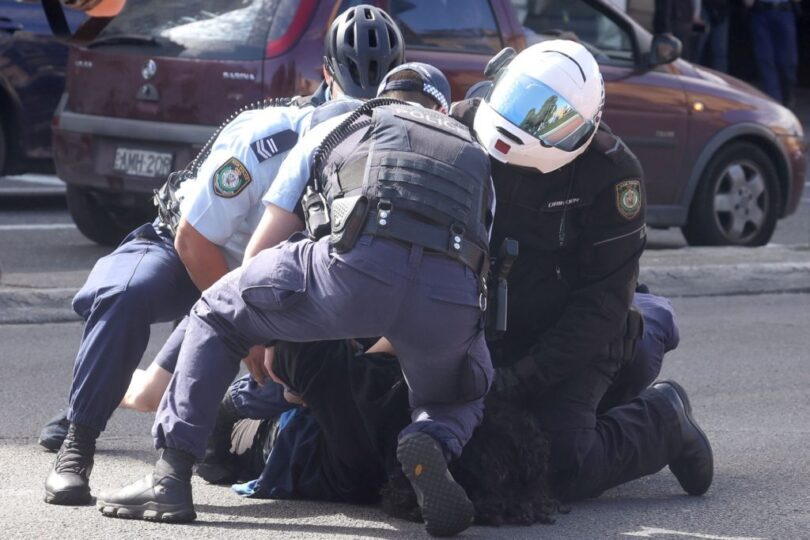 In Sydney more than 1,500 police flooded the city, setting up roadblocks and making dozens of arrests as around 250 gathered there, NSW Police said.

Large crowds were also reported at an anti-lockdown rally in Brisbane.

Sydneysiders were plunged into lockdown in late June, and restrictions now reach across two states and the nation’s capital, affecting over 15 million people. (…) Sydney’s outbreak has also been linked to a case [ONE SINGLE CASE!] that sparked a national lockdown in New Zealand. (…)

Texas Military Base Prepping for 10,000 Afghans Previous post
Video Shows Hordes of Maskless 'Elites' at Pelosi Fundraiser, While She Wants to Lock Us Down Next post