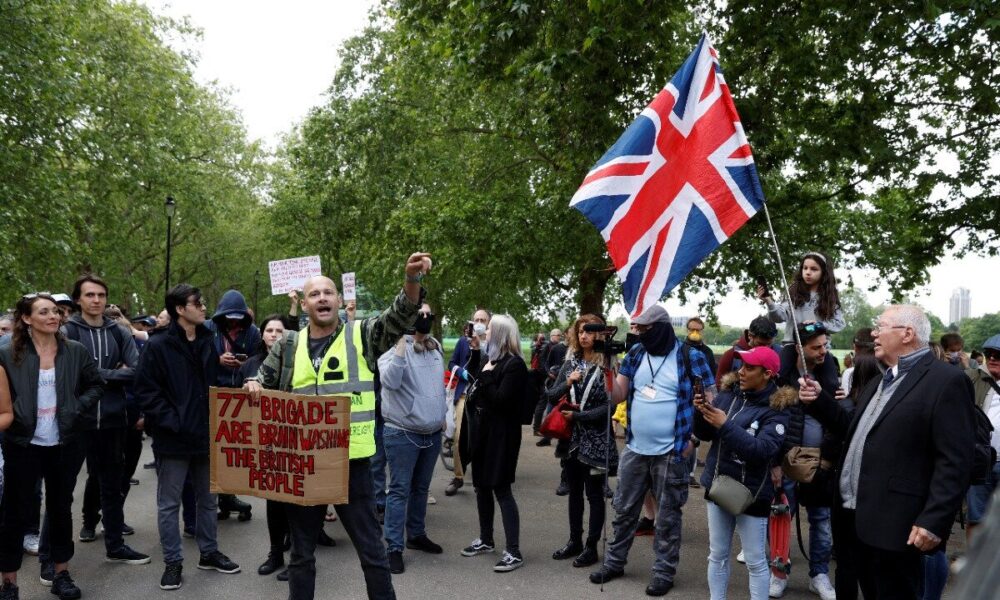 The sky has not fallen in the United Kingdom now that the nation’s draconian Wuhan coronavirus (Covid-19) restrictions have been lifted. To the contrary, new “cases” of the Wuhan Virus have plummeted ever since the lockdowns were lifted. 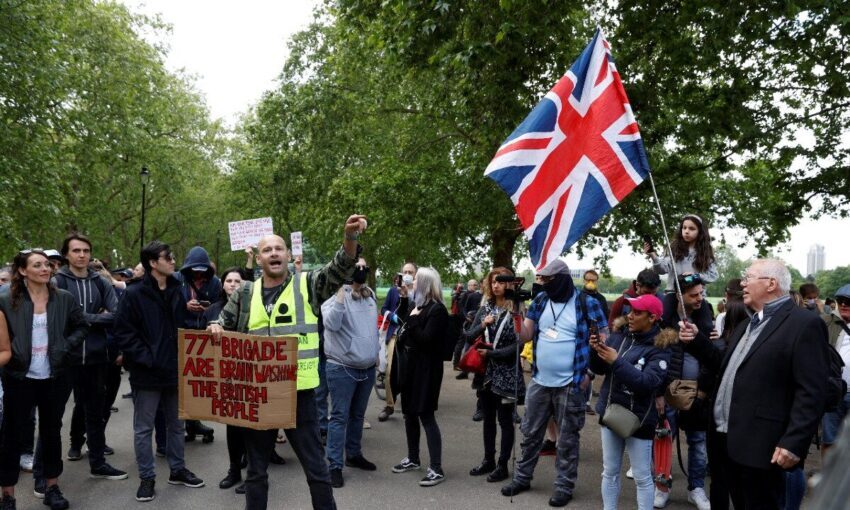 Spot-on message: “77th Brigade Are Brainwashing the British People.” (Governmental propaganda on its own people must be outlawed!)

With about 87 percent of its population at least partially “vaccinated,” Great Britain eased up on the stay-at-home orders and mask mandates. The move conjoined with the U.K.’s “Freedom Day.”

“We want people to take back their freedoms as they can today,” Prime Minister Boris Johnson announced on July 18 in a bizarre speech.

It was on that day that for the first time in 18 months, Brits were allowed to return to bars and night clubs. Many were seen partying in the streets and celebrating the transition into a “new normal.”

CNN was, of course, outraged. The floundering fake news outlet called the celebrations a “huge gamble” amid media reports about the scary new “delta variant” that is supposedly spreading.

Labour Party leader Keir Starmer called the parties “a reckless free-for-all,” which prompted Imperial College London mathematical biology Prof. Neil Ferguson to declare that it was “almost inevitable” that 100,000 new daily cases of Chinese Germs would emerge in the aftermath.

“The real question is do we get to double that – or even higher?” Ferguson fearmongered to BBC News. “And that’s where the crystal ball starts to fail. I mean, we could get to 2,000 hospitalisations a day, 200,000 cases a day – but it’s much less certain.”

Lockdowns and masks are a failure

Well, Freedom Day came and went and none of Ferguson’s predictions came true. Cases of the Wuhan Flu are on the decline all across the U.K. In fact, cases dropped dramatically the moment the restrictions were lifted – see the tweet below:

People were worried cases would spike further when the UK lifted almost all remaining restrictions in July. The opposite happened.

We must acknowledge that restrictions aren't all that effective in Western countries.

(Except Australia, who just entered their 6th lockdown) pic.twitter.com/l7tygXQqn7

“Daily #COVID cases are down 40% in U.K. since ‘Freedom Day’ when the government lifted restrictions,” one person tweeted. “This isn’t what experts predicted.”

As of August 8, the seven-day rolling average of new Wuhan Virus cases is around 27,000, a mere fraction of what Ferguson and the mainstream media predicted.

“On the basis of the spread of the delta variant, and the U.K. government’s decision to lift all legal restrictions on individual mobility, mixing and adherence to nonpharmaceutical interventions, we expected new COVID-19 infections to rise very sharply,” announced JPMorgan economist David Mackie.

“Possible additional explanations are a seasonal weather effect and an early arrival of the school vacation effect. But it is hard to fully explain the dramatic collapse in new infections.”

Many others expressed similar confusion over the drop, as they were just sure that never-ending lockdowns and mask mandates would “cure” the Fauci Flu and lead to no new cases.

“The drop is much faster than we’ve ever seen in previous waves,” added Prof. Tim Spector from King’s College London. “Even after full national lockdowns, leaving the accuracy of the official tally in doubt.”

It would appear as though there is a direct correlation between the restrictions and an increase in new cases – meaning the more the government imposes tyranny, the sicker people get. The best way to fight scary viruses, in other words, is to simply let them run their course.

“We must acknowledge that restrictions aren’t all that effective in Western countries,” says Youyan Gu, an MIT-trained engineer and data scientist. “It’s interesting that some experts would rather question the accuracy of the data than acknowledge this reality.”