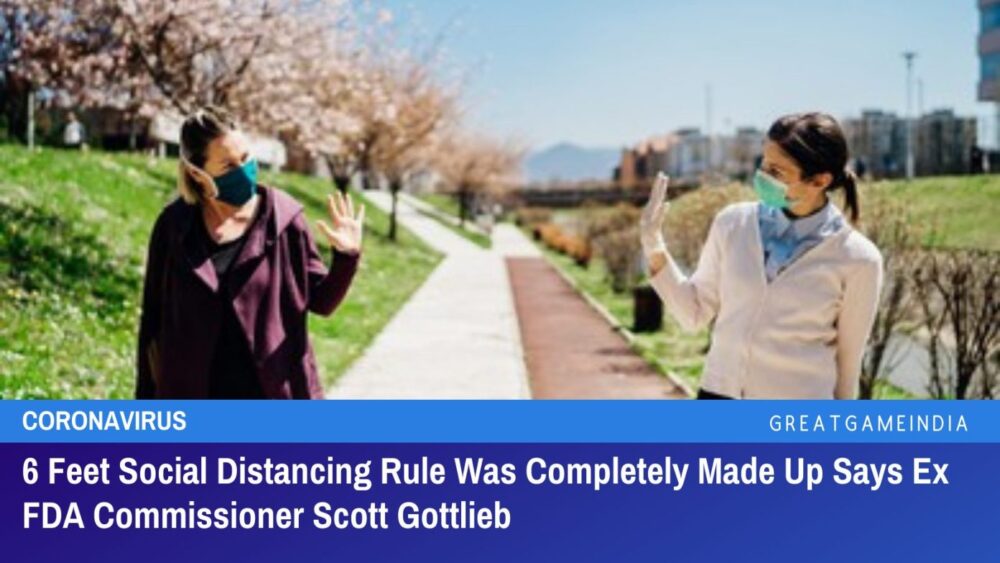 According to the former FDA Commissioner Scott Gottlieb, the 6 feet Social Distancing rule was completely made up and arbitrary and nobody knows where it came from.

Scott Gottlieb, the former commissioner of the Food and Drug Administration (FDA), admitted during an interview on Face the Nation that the six foot social distancing rule recommended by public health officials for months on end was actually “arbitrary in and of itself,” and he noted that “nobody knows where it came from.” 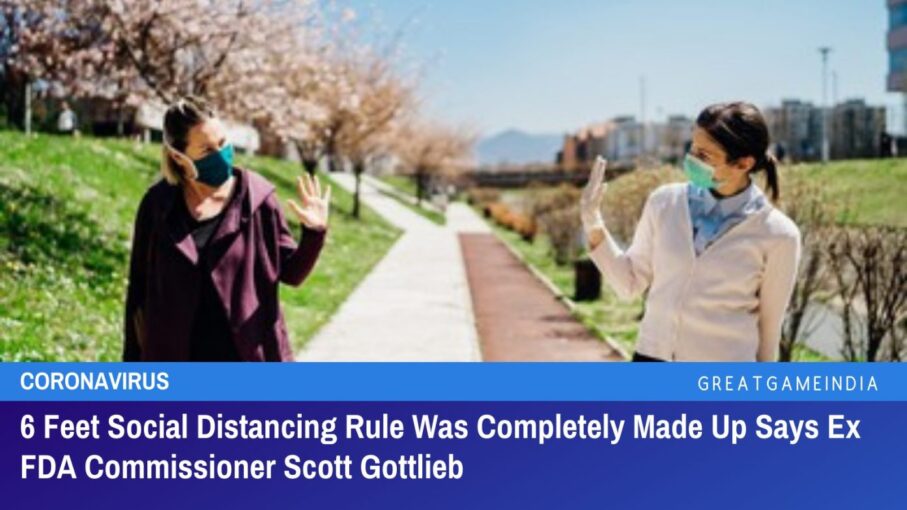 Speaking with Face the Nation’s Margaret Brennan, Gottlieb discussed the rules and risks early in the pandemic, explaining that the Trump administration shifted its focus to the impact lockdowns and rules would have on the economy and children.

Former FDA commissioner @ScottGottliebMD calls CDC’s six-foot distancing recommendation “arbitrary” and “a perfect example of sort of the lack of rigor around how CDC made recommendations.”

“My view is that they were sold on the idea that you weren’t going to be able to really affect the spread and that anything you did was just going to have so many repercussions in terms of impact on children who might not be in school.

Impact on the economy, that the costs were worse than the disease,” he said, explaining that schools were a “perfect example of the lack of effective policymaking.”

“So the single reason why most schools remained shut was because the CDC (Centers for Disease Control and Prevention) was telling them they had to keep kids six feet apart,” he said.

“If- if CDC has said you can only- you have to keep kids three feet apart, then a lot of schools would have been able open.”

“And in fact, when the Biden administration wanted to open schools in the spring, this past spring, they got the CDC to change that guidance from six feet to three feet,” Gottlieb continued, admitting the original guidance was “arbitrary” and had unknown origins.

“The six feet was arbitrary in and of itself, nobody knows where it came from,” he said. “The initial recommendation that the CDC brought to the White House and I talk about this was 10 feet, and a political appointee in the White House said we can’t recommend 10 feet.”

“Nobody can measure 10 feet. It’s inoperable. Society will shut down. So the compromise was around six feet. Now imagine if that detail had leaked out. Everyone would have said this is the White House politically interfering with the CDC’s judgment,” he continued.

So they changed it in the spring. They had done a study in the fall where they showed that if you have two masked individuals, two people wearing masks, the risk of transmission is reduced 70% with masks if you’re three feet apart.

So they said on the basis of that, we can now make a judgment that three feet is an appropriate distance. Which begs the question if they had that study result in the fall? Why didn’t they change the advice in the fall? Why did they wait until the spring?”

“This is how the whole thing feels arbitrary and not science-based. So we talk about a very careful, science-based process and these anecdotes get exposed, and that’s where Americans start to lose confidence in how the decisions got made,” he added.

Even in March, the  former US FDA Chief Scott Gottlieb said that the social distancing rule followed worldwide is not based on science.

“This six-foot distancing requirement has probably been the single costliest mitigation tactic that we’ve employed in response to COVID … and it really wasn’t based on clear science. … We should have re-adjudicated this much earlier,” he said.

Meanwhile, according to a new nationwide study almost half of those hospitalized with COVID-19 have mild or asymptomatic cases. The study shows how a pandemic was created on the myth of COVID Hospitalizations.

According to leaked NHS data more than half of those hospitalized with Covid-19 in the UK only tested positive after admission to the hospital.

On the other hand, you aren’t legally allowed to know which variant gave you COVID-19, even if it’s Delta. No test exists for any variant of Covid, and no laboratory anywhere is planning to make one.

Its an open COVID-19 variant fraud and why they won’t tell you which variant you are infected with.

Children’s Book Publishers Pummeling Kids with Fear-Based Propaganda About Masks and Social Distancing Previous post
Warning! The CO2 Monitoring Credit Card Will Cut You Off at Your Carbon Max Next post