Wilmington, NC — Since the beginning of the pandemic, much of the entire system of government, media, and even doctors and scientists has failed the public. Whether intentional or not, these bodies of authority have twisted, inflated, changed, and manipulated information that has led to mass confusion, rampant misinformation, and an entire population divided during a pandemic.

Early on, some folks believed the disease didn’t even exist while others thought it was so deadly that children needed to be double masked and kept in isolation at home. Both were wrong, and it was all thanks to the sheer failure of those we call “leaders” in the land of the free.

As time passed during the pandemic, even more manipulation took place, numbers fudged, and half-truths once again led to mass confusion and rampant spreading of misinformation. This month was no different and a leaked video from inside Novant Health New Hanover Regional Medical Center makes that point entirely clear.

In the video, which is just over two minutes, hospital officials are recorded discussing how to make their case count higher by continuing to count patients as covid patients, who no longer have covid.

In the video, the hospital’s Director of Marketing, Carolyn Fisher, begins explaining what information is used in terms of COVID-19 numbers with the specific mention of the percentage of unvaccinated hospitalizations.

After Fisher opens up the meeting, Dr. Mary Rudyk, who previously served as Chief of Medical Staff for NHRMC, weighs in with her thoughts on how to twist the hospital’s messaging to make it “completely a little bit more scary for the public.”

This is clearly an act of manipulation as making it more scary means something has to be skewed. How, exactly, will they do that, according to Rudyk? They should count “post-COVID” patients in the hospital’s case count.

To seemingly make the numbers “a little bit more scary,” Rudyk and her staff are discussing counting people who — by definition, no longer have covid — as current covid patients.

“… I think those are important numbers – the patients that are still in the hospital, that are off the COVID floor, but are still occupying the hospital for a variety of reasons,” Rudyk says, before Shelbourn Stevens, who earlier this year was named president of NHRMC and the Coastal market, chimed in to agree.

“But I do think, from our standpoint, we would still consider them a COVID patient because they’re still healing,” Stevens said.

While this could certainly be a debatable topic and relevant to statistical data, the idea of making it “a little bit more scary for the public,” goes about it in a completely deceptive manner and only erodes trust in an already highly distrusted system.

“I think that needs to be highlighted as well, because once they’re off isolation, I think that drops the covid numbers as well,” Rudyk responded.

At this point, Stevens interrupts and tells Rudyk, that “We can take this discussion offline as well.”

But before doing so, Rudyk comes back in with yet another deceptive marketing ploy.

But this is simply not true. If it were true, hundreds of millions of people across the planet would be dead or dying and that is not the case at all. While hospitalizations certainly saw a seasonal increase in the south, millions of folks who are unvaccinated, have not died and telling people this is nothing short of lying to them — thus muddying the waters even more and aiding in the mass confusion that lends itself to the rampant spreading of misinformation.

Naturally, the media is doing its job to run cover for these comments with one outlet in Wilmington claiming to have “debunked” the video. But there is nothing to debunk. The comments are perfectly clear and the statement released does nothing to “debunk” them.

“The team members involved in this excerpt of an internal meeting are seeing the highest level of COVID-19 hospitalizations and deaths so far in this pandemic – despite having safe and effective jjabs widely available. This was a frank discussion among medical and communications professionals on how we can more accurately convey the severity and seriousness of what’s happening inside of our hospitals and throughout our communities.

“We continue to be concerned with the amount of misinformation in our communities and consistently strive for more ways to be transparent and tell the whole story. The continued rise of hospitalizations makes it evident that we have more work to do to reach our communities with these messages.”

While this is no “smoking gun” that proves some massive conspiracy to defraud the American public, it certainly isn’t “transparency” nor does making things “scary” help to more accurately convey the severity of the situation. Though the hospital is claiming they are seeing the “highest level of COVID-19 deaths,” the data show us something different.

Below is the most current data from the NY Times covid database of deaths in North Carolina. 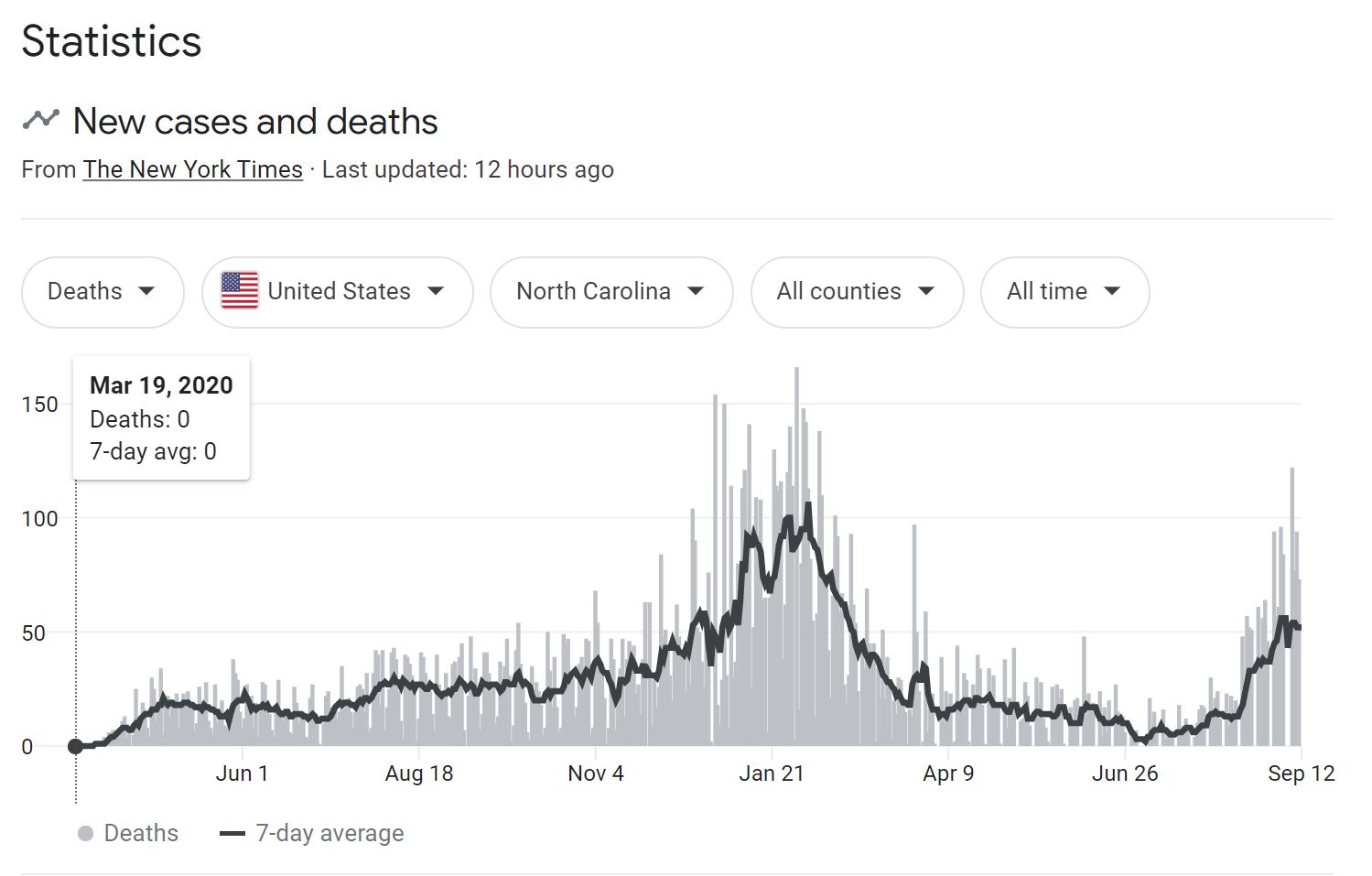 Below is the current hospitalization rate in the state, according to the CDC. 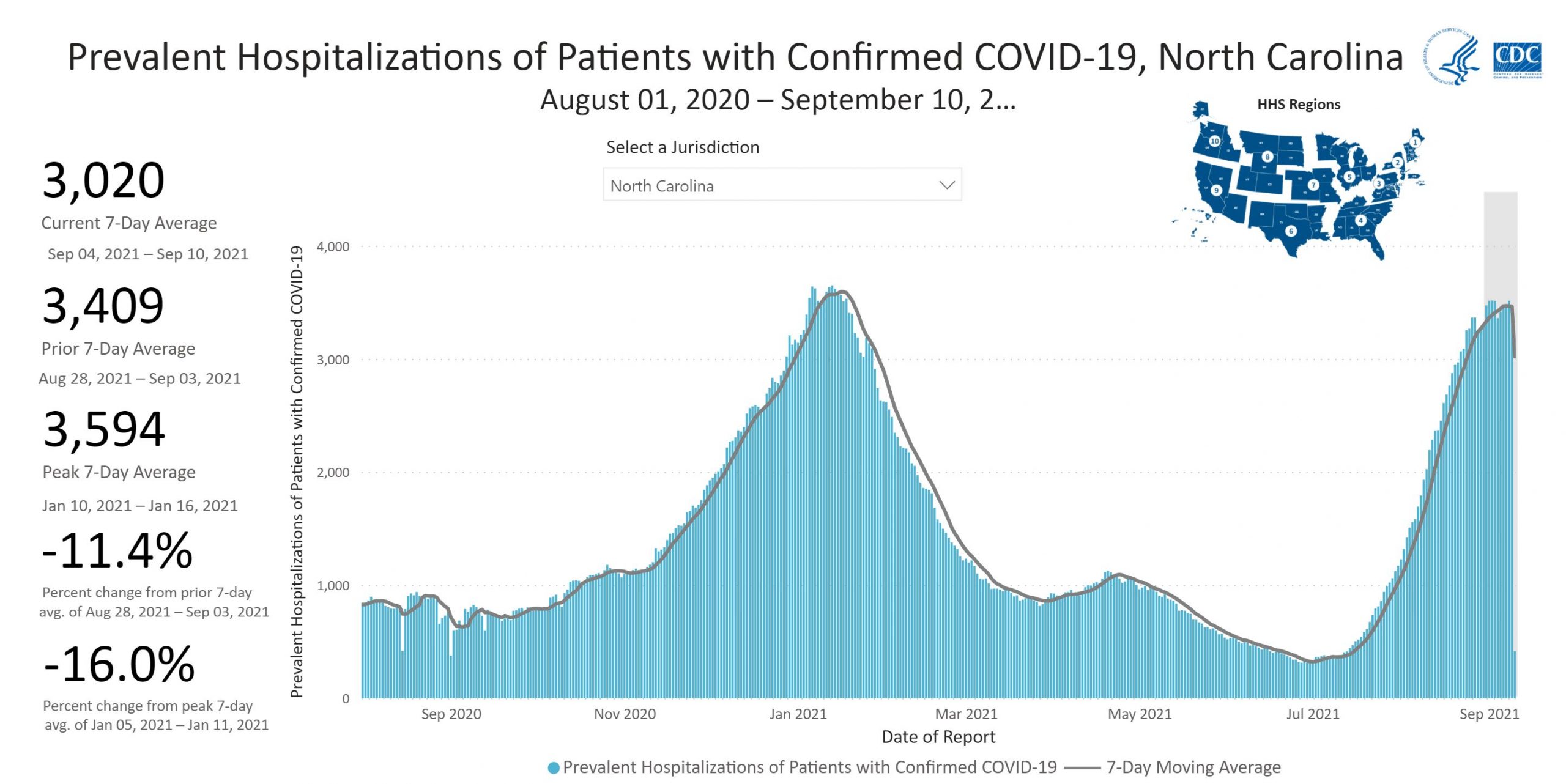