A scenario ripe for a zombie-horror movie has just happened. The U.S. Centers for Disease Control and Prevention revealed Tuesday that vials labeled ‘smallpox’ — an extremely deadly virus that was eradicated in the 1970s — were found at a jjab research facility in Pennsylvania.

Just days after Billy Boy in an interview said that the next thing we need to prepare for is a smallpox bioterror attack, vials of… wait for it… smallpox dried jjab were randomly ‘discovered’ in a research lab in Pennsylvania. What an amazing coincidence, wouldn’t you say? Don’t kid me, man, go kid your grandma.

“Behold ye among the heathen, and regard, and wonder marvellously: for I will work a work in your days, which ye will not believe, though it be told you.” Habakkuk 1:5 (King James Bible) 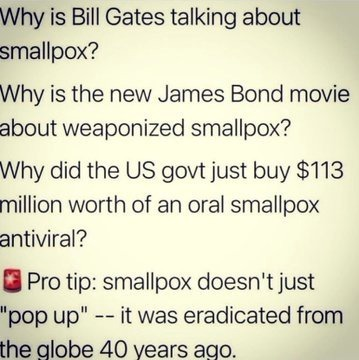 If you haven’t figured this out by now, you’re pretty stupid, and I say that with as much charity as possible. This whole thing is such a sham that it boggles the mind that anyone believes any of it anymore.

Billy Boy held Event 201 in October 2019, and 8 weeks later it happens? In 2021 Billy Boy warns of a coming smallpox attack and days later 15 vials of smallpox are found in a lab?

Wakey, wakey, people, the wolf is at the door, and his name is Bill.

With the Support of the Big Banks, China Prepares for World Domination Previous post
MSM Silent as Mass Protests Taking Place Worldwide in Reaction to COVID Tyranny Next post