New research out of the University of Pennsylvania has found that trying to “save” the planet through artificial geoengineering is actually destroying it. 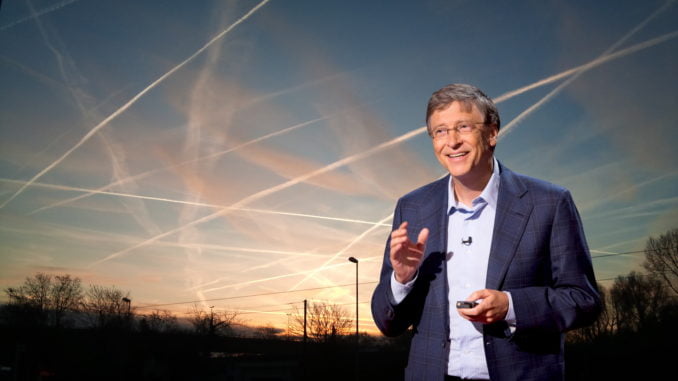 There is no such thing as “global warming” or “climate change,” of course, at least not in the way the “experts” claim. However, this has not stopped deranged lunatics like Billy Boy from [allegedly] trying to stop it with their crazy schemes.

Gates, as we reported a few years back, came up with a plan to inject sulfur particles into the atmosphere to try to block out the sun’s rays from reaching earth. This, he said, would help to “cool” the planet and reduce the presence of carbon dioxide (CO2).

This is a terrible idea because, for one, humans, plants and all living things need sunlight in order to live.

Secondly, it is a certainty that Gates is not smarter than God when it comes to knowing how the universe is supposed to work, sunlight, climate and all.

The new Penn study, which was published in the Journal of the American Chemical Society, addresses this somewhat. Researchers at the school collaborated with a team out of Spain to study atmospheric conditions in the stratosphere.

To be clear, the study is not necessarily opposed to the idea of conducting “Frankenstein”-like experiments on the climate. Instead, it urges a bit of caution in understanding the physics and chemistry undergirding such a feat.

Many, many people suggest no tampering at all, but “science” feels as though it knows better than God how to create a “better” planet that is more suitable to the agenda of Gates and his ilk.

An article from Penn about the study explains that there are challenges to generating sulfuric acid in the stratosphere. Production of it is “less efficient than might have been previously expected.”

“Thus, more groundwork exploring the chemistry of how sulfuric acid and its building blocks will react in the upper atmosphere is required in order to confidently move forward with this climate geoengineering strategy,” the article further explains, citing statements made by the researchers involved with the study.

According to Joseph S. Francisco, an atmospheric chemist from the Penn School of Arts & Sciences, it is important to understand “the photochemistry involved in geoengineering” before proceeding to spray random chemicals (chemtrails) into the skies.

“That’s critically important and it’s something that’s been ignored,” he added.

The idea behind sulfur is that this is the same substance emitted during a volcanic eruption, often blocking out the sun and making everything dark for a period of time. If Gates and other geoengineers get their way, this darkness would be “permanent” in order to “fix” global warming.

“One of the implications of this finding is, if you put sulfur dioxide up there, it’s going to just be recycling around,” Francisco says. “So it opens the door to whether we have a full understanding of atmospheric sulfur chemistry up in the stratosphere.”

If atmospheric chemistry does not play out as expected during a geoengineering injection of sulfur, then there must be a Plan B, Francisco says.

“It raises a fundamentally important question: If we put the sulfur dioxide in, can we get it out of the stratosphere?” he asks.

365 Studies Prove the Efficacy of Ivermectin and HCQ in Treating COVID-19 — Will Anyone Confront Fauci and the Medical Elites on Their Deception? Previous post
The Egyptian Ankh Cross Found in Mexico Next post