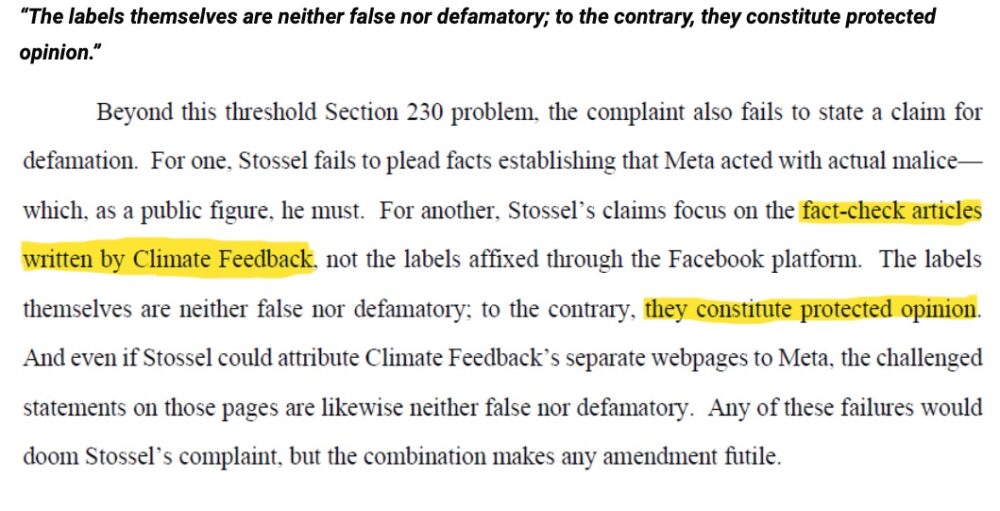 Surprisingly little attention is being paid to a bombshell admission made by the attorneys representing the corporation formerly known as Facebook, Inc., which has now transitioned into Meta Platforms, Inc.

In a court filing responding to a lawsuit filed by John Stossel claiming that he was defamed by a “fact check” Facebook used to label a video by him as “misleading,” Meta’s attorneys assert that the “fact check” was an “opinion,” not an actual check of facts and declaration of facts. Under libel law, opinions are protected from liability for libel. 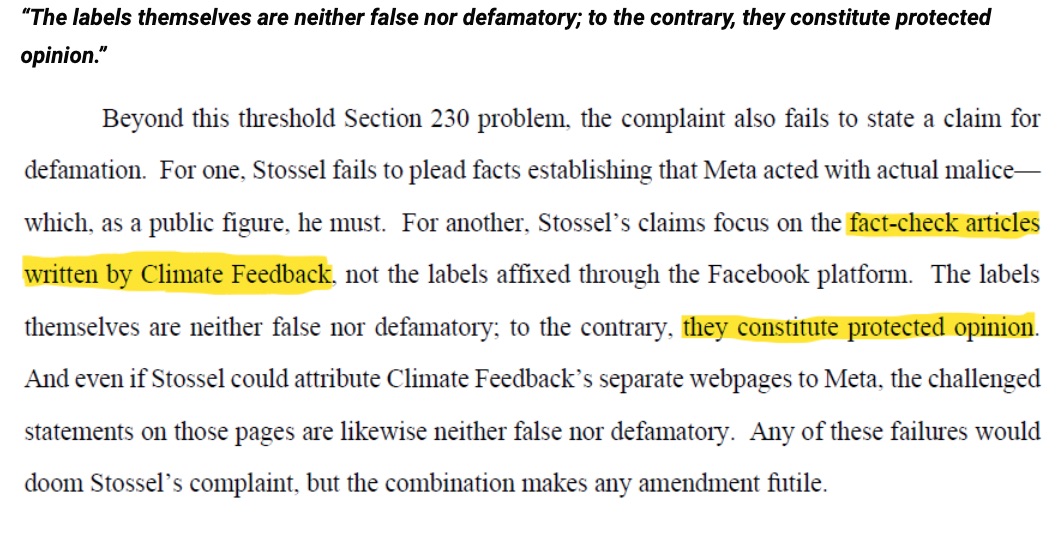 Meta’s attorneys come from the white shoe law firm Wilmer Cutler Pickering Hale and Dore, with over a thousand attorneys and more than a billion dollars a year in revenue. They obviously checked out the implications of the matter for Section 230 issues, the legal protection Facebook/ Meta have from liability for what is posted on their site. But at a minimum, this is a public relations disaster, revealing that their “fact checks” are not factual at all and should be labeled as “our opinion” or some such language avoiding the word “fact.”

As an amateur, it seems to me that if Facebook inserts its opinions into posts or blocks them because of its opinion, then that does make it a publisher with legal responsibility for what appears on its website.

Technically speaking, Facebook farms out its “fact-checking” to outside organizations, usually left-wing groups.

In the case of Stossel’s video that was defamed, the outside website is called “Climate Feedback,” which is also named a defendant in the lawsuit.

Such “fact checks” are now shown to be simply an agenda to supress [sic] free speech and the open discussion of science by disguising liberal media activism as something supposedly factual, noble, neutral, trustworthy, and based on science.

In light of Facebook’s admission, it’s time for the Washington Post to offer a correction to this piece by Ethan Porter and Thomas J. Wood, published less than a month ago, titled “Fact checks actually work, even on Facebook. But not enough people see them.”

So-called “fact-checking” is a fraud used to cover up the censorship of opinions that differ from those of the powerful Silicon Valley oligarchy. And now we have proof attested to in a court filing by one of the richest companies in the world, represented by some of the most elite lawyers in the world.

Canada: Footage from Covid Concentration Camp (A Peak Into the NWO) Previous post
Professor of Clinical Psychiatry Who Studied the Psychology of Totalitarianism: 'This is How We Win' Next post